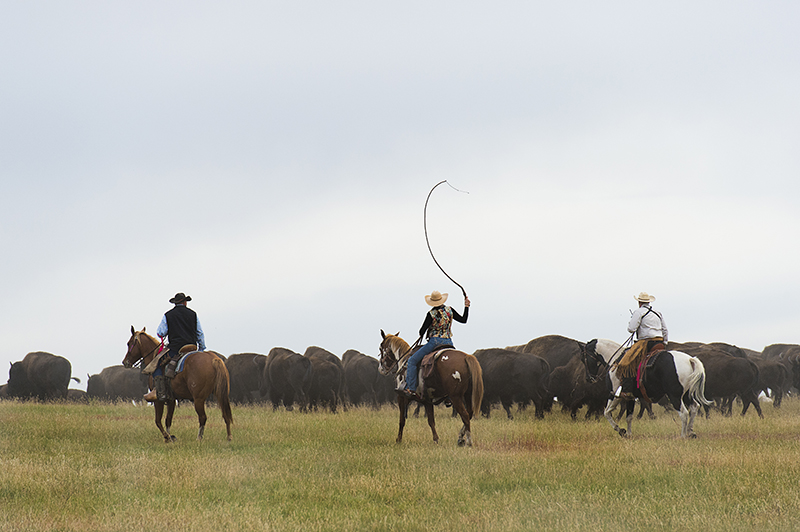 Cowboys and cowgirls steer one of the purest herds of Bison during the annual Custer State Park Buffalo Roundup.

Once upon a time, it is estimated up to 60 million bison – also known as American Buffalo – roamed from Canada through to Mexico. Nearly hunted to extinction, these nomadic beasts were reduced to a mere thousand across the vast American prairie.

Within Custer State Park, South Dakota, USA, one of the most genetically pure herds in North America are protected and are now thriving. On the last Friday of each September, the annual Custer State Park Buffalo Roundup is held, with cowboys and cowgirls coming together to bring in the park’s 1,300-plus herd. Once again, the thundering hooves of these mighty animals rumble across the plains and along the autumn-toned valleys and creek beds. 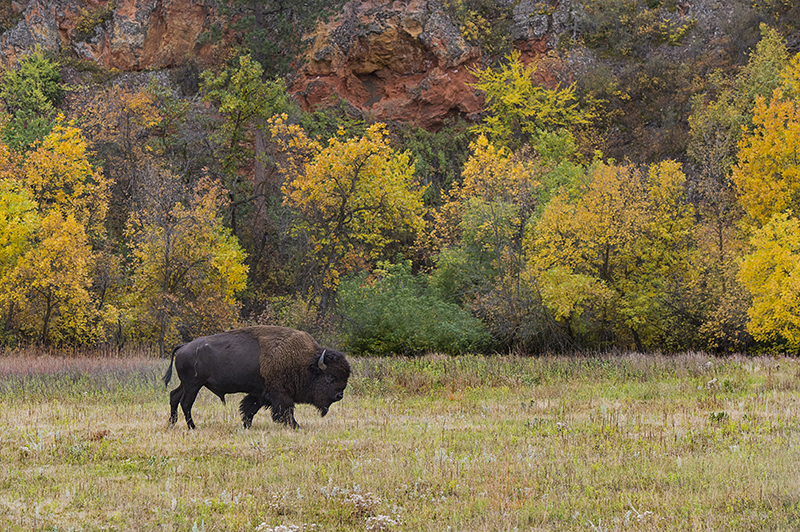 A bull in full breeding mode misses the roundup and will be monitored. Mature breeding bulls are too dangerous to bring into the corrals as they like to keep to themselves and don’t mix with cows unless its mating season. They are branded and well known in the park – each has a personality and these boys don’t need any encouragement for a ‘friendly’ tussle. While the bison may look timid, they should never be approached.

Bison, the largest terrestrial animals in North America, are revered by Native Americans who had over 100 uses for the one buffalo, including clothing, shelter, and to make utensils such
as pots and pans – even the bladder was used to carry water. Nothing was wasted and thanks was given for every beast.

Standing over 1.8 metres high, weighing over a tonne and being able to race up to 40 miles per hour, these massive animals are nothing like their African namesake. With a shaggy brown coat, they have very poor eyesight, acute hearing and apparently, an excellent sense of smell. Snow does not melt on their coats making them a perfect inhabitant for the cold winters out on the open plains. 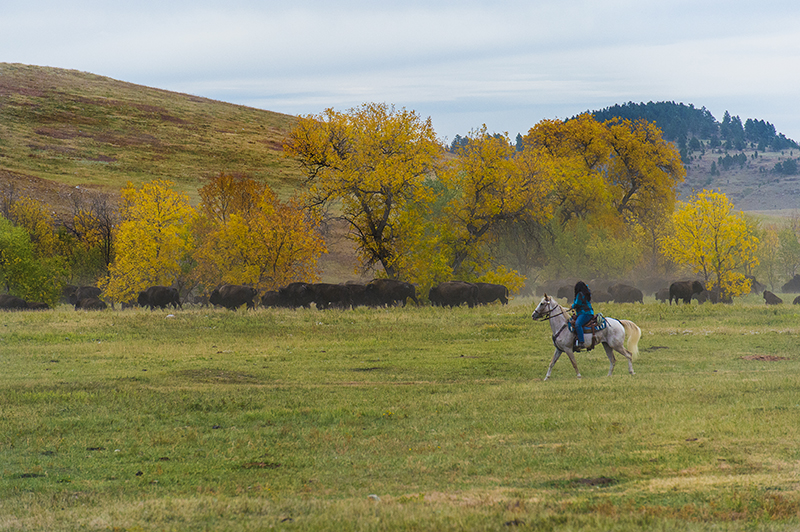 As the bison come towards the corrals, past the cheering crowds, you’ll hear the crack of whips and ‘yee-haws’ ringing through the air, a reminder of times gone by in South Dakota. •

Photography by Danielle Lancaster. Danielle currently uses a Nikon D4 and D3 with three lenses: Nikon 70-200mm 2.8, Nikon 24-70mm 2.8 and 18-35mm. Another favourite lens is the Nikon 105mm. Danielle was the winner of the Nikon Walkley Queensland Award 2013 and is the author of travel books including Best 4WD Tracks around Queensland and Out around the Bulloo. 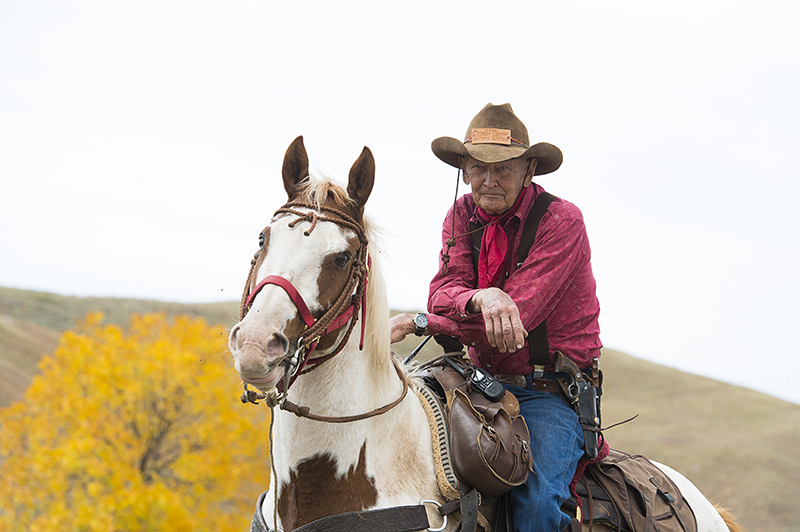 Bob Lantis has never missed a Custer State Park Buffalo Roundup in all its 51 years and doesn’t intend to. He is the official Trail Boss of the ride. With spurs jingling and gun in the holster, his aim is for a steady muster each year. ‘I like it when it’s a bit cooler, they are bit more friskier then,’ says an 81-year-old Bob at the 2016 muster. 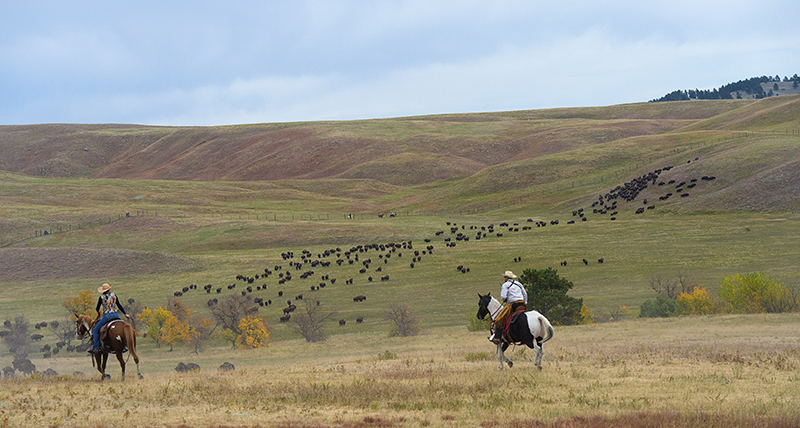 The bison are coming: Riders in the Custer State Park 2016 Roundup, prepare to flank the bison as they come over the hill and gently herd them into the corrals. 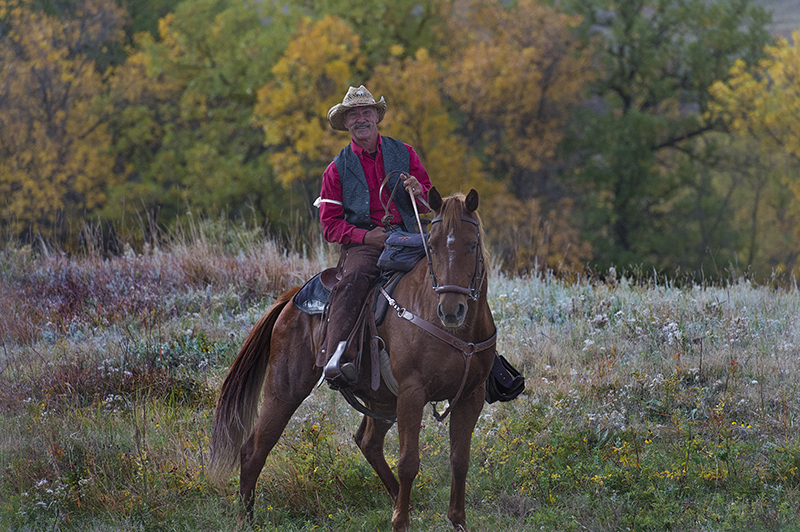 Cowboys come from everywhere to participate in the annual roundup. 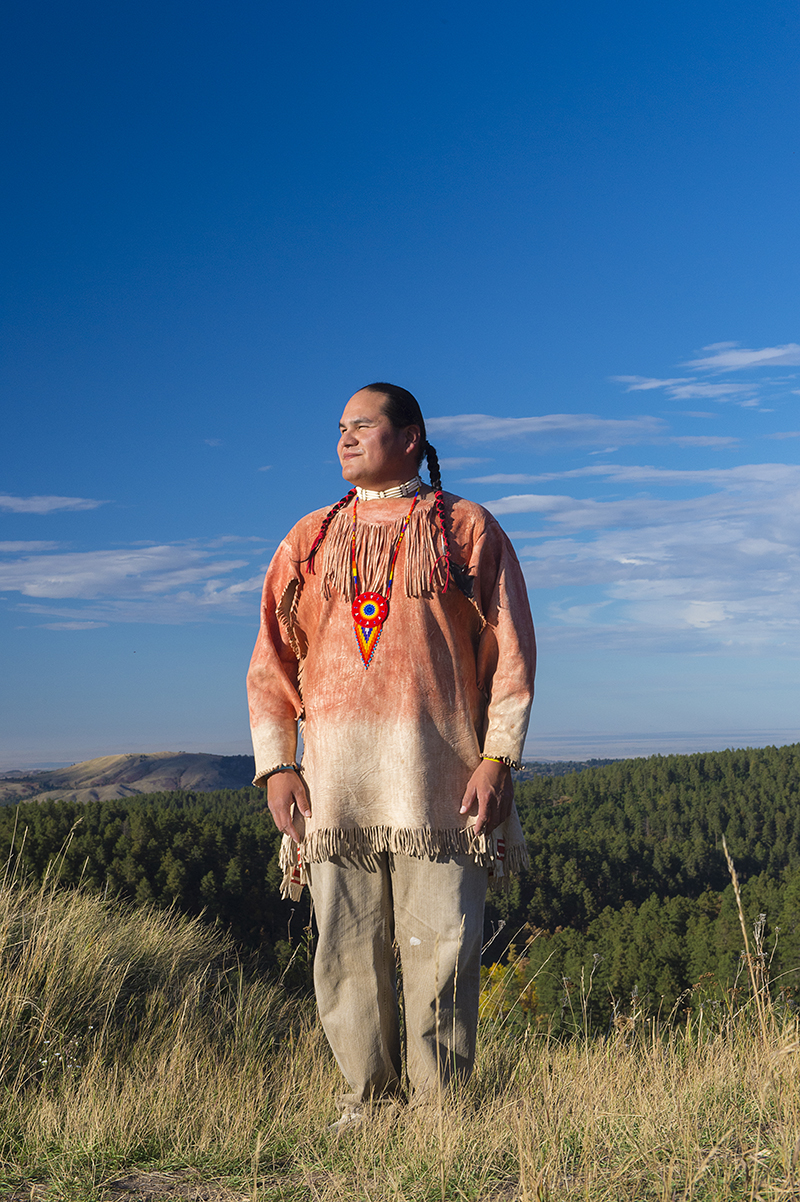 Bison, have always been held in high regard by the American Indians. At the Tatanka Center on the outskirts of Deadwood, donated by Kevin Costner, dedicated local guides such as Billy LeRoy, or Sunkmanitu Oheanau his Native American Indian name (symbolising Coyote Trail) is dressed in clothes made from a bison hide. 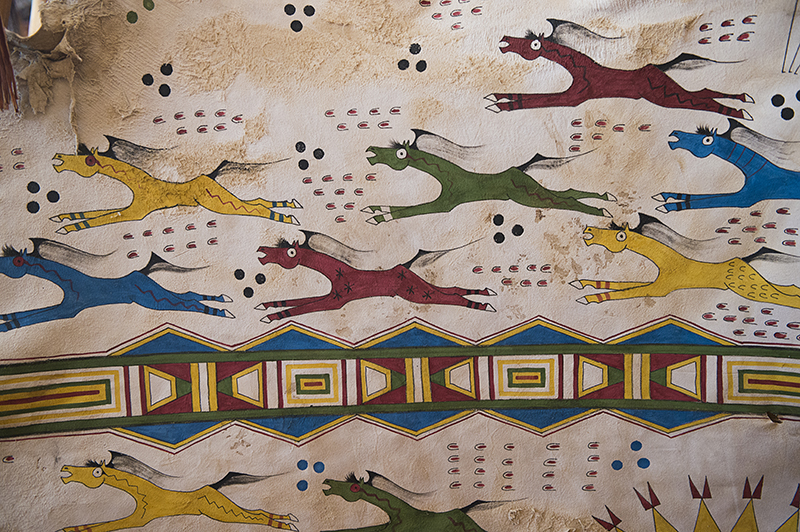 Bison hides were cured and used as canvases by Native American indian artists. For authentic souvenirs try Prairie Edge Trading Co. & Galleries in the main street of Rapid City, the Tatanka Center, Crazy Horse Mountain Visitor Center, Red Cloud Heritage Center on Pine Ridge Reservation and if you visit sites like the Wounded Knee Museum and cemetery (strongly recommended) you may meet locals from the reservation peddling their wares. 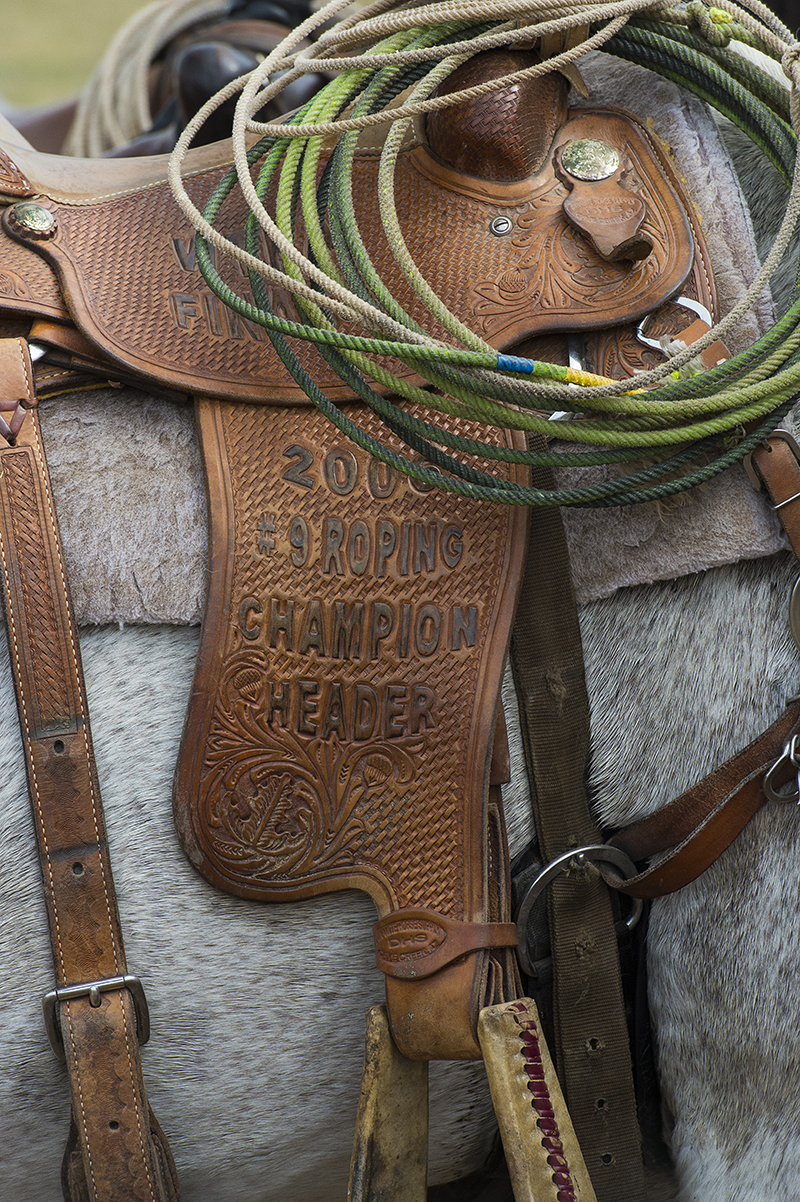 Take the time to meet legendary American cowboys and cowgirls who all work on the round-up as volunteers. You just never know who you may meet. 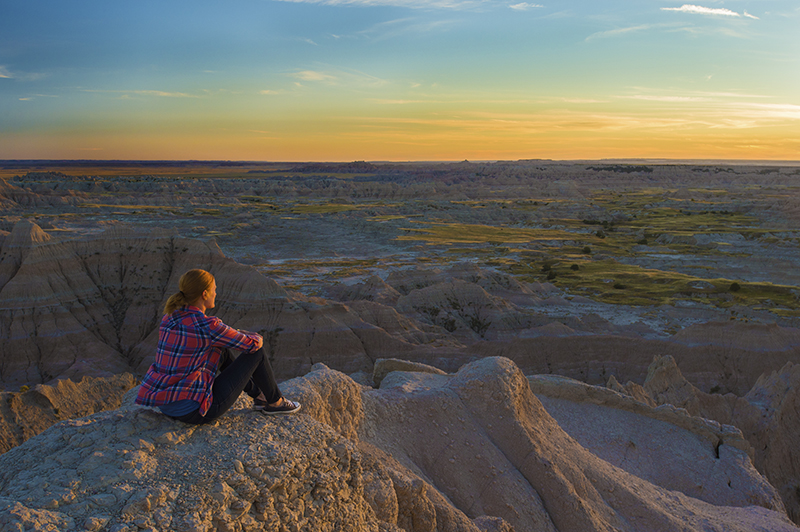 As the sun sets across Badlands National Park a solitary bison bull grazes far below. A mere 80 kilometres east of Rapid City, the national park covers over 98,743 hectares and contains the richest deposits of Oligocene mammals known, dating back more than 33 million years. 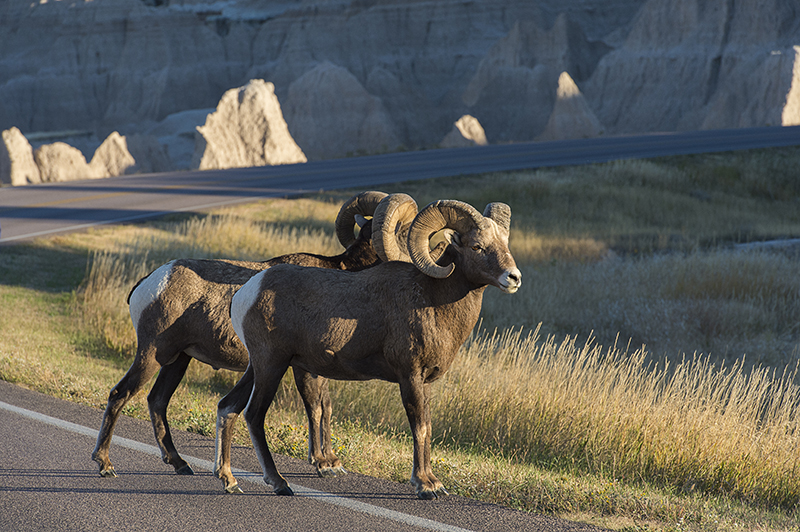 Bison are not the only wildlife to spot when visiting South Dakota. Bighorn Sheep, (Ovis canadensis), are another. These sheep are native to North America and are only one of the three species found in North America. Keep an eye out for prairie dogs peaking their heads out from the native grasslands. While they look nothing like a dog, their call was first thought to resemble a dog’s bark, hence their name. 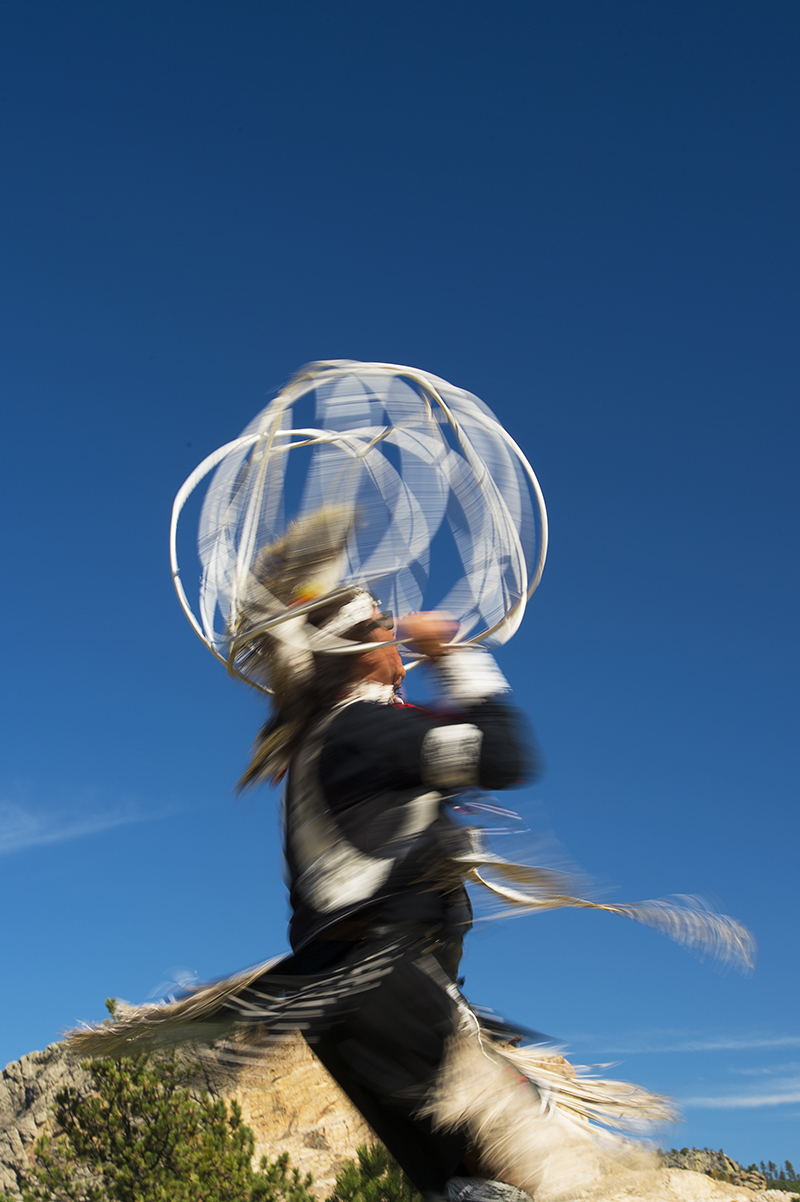 At Crazy Horse Memorial a local American does a traditional dance. 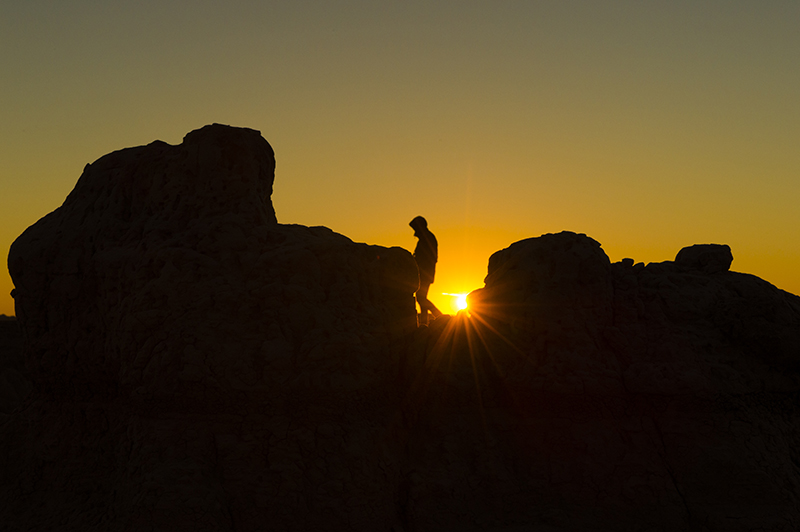