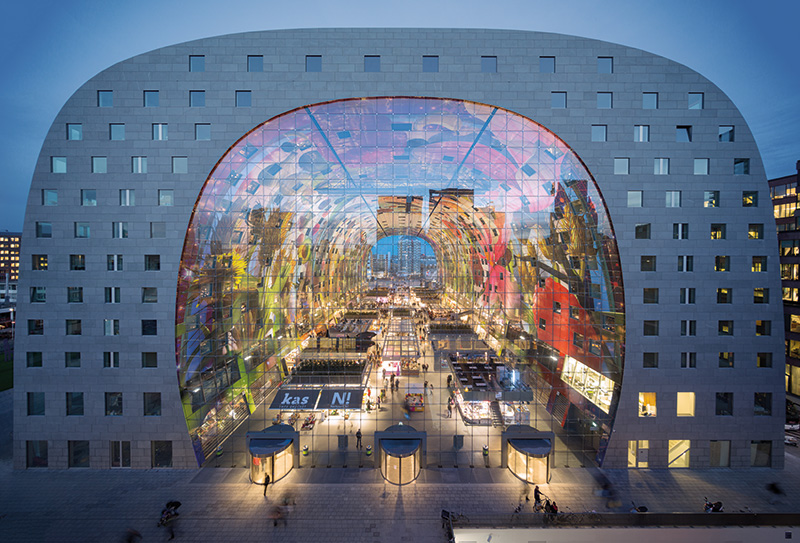 In the middle of Rotterdam is a large bronze figure with arms outstretched in horror, a huge hole where his heart used to be. “Destroyed City” is the name of the sculpture, which depicts how the epicentre of Holland’s tough, working class port city was destroyed by the Germans in 1940.

Seventy-six years later this port is Europe’s largest, but now it is located closer to the sea to cater to huge container ships. Today Rotterdam’s centre and the original docklands on South Bank are dotted with cutting-edge buildings and inventive urban spaces.

Even though it has always been a no-nonsense kind of place, Rotterdam takes its architecture and its urban fabric very seriously. Since 2003, it has hosted an Architecture Biennale (23 April–10 July this year) that brings together international experts to address pressing urban issues.

I ask Alexander Haan, project manager with UrbanGuides, to explain exactly how the city has re-invented itself.

“The World War II destruction, ironically, created a clean slate. With the Technical University of Delft in our backyard and big development projects in the works, lots of architectural firms set up offices here, which brought a steady stream of international architects and students.” He adds, “We’ve been a port city for a long time so there is also a terrific diversity of cultures and food…everything from Indonesian and Moroccan to Turkish and Chinese…that is pretty unusual for Holland.” 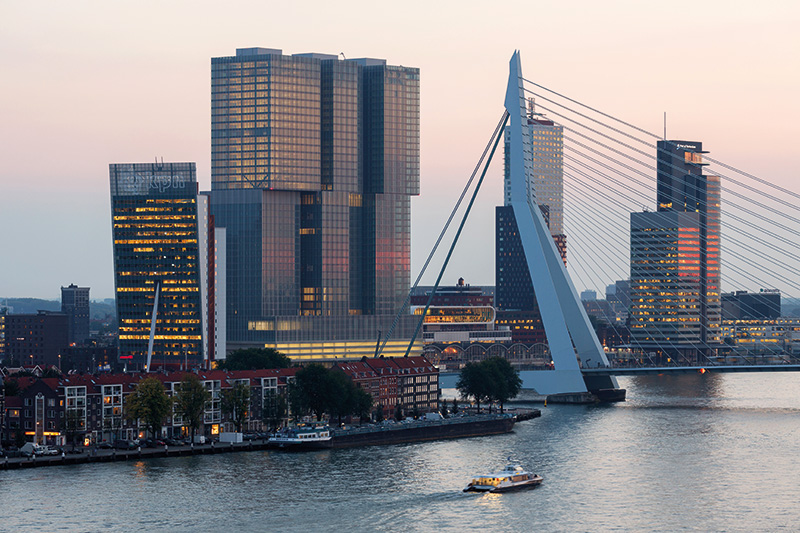 UrbanGuides has operated architectural, art and cultural tours of Rotterdam for 15 years, ever since the city was designated a European Capital of Culture in 2001. And the breadth and depth of their offerings are remarkable. Architects, art historians, urban planners and other city experts lead more than 20 different tours – on foot, by bike and by boat – that explore iconic buildings, art museums, and distinctive neighbourhoods as well as giving overviews of the whole city. In the process, they reveal all the layers of Rotterdam’s urban development and modern history: the progressive architecture of today, the industrial heritage of the past and the emerging metropolis of tomorrow.

“Our most popular tours are the Van Nelle Factory tour – it has UNESCO World Heritage status– the architectural walk of South Bank, and the number one bicycle tour: Rotterdam – City of Modern Architecture. We believe passionately in the additional experience of the city by bike!”

I opt for the bike tour which starts at Rotterdam’s sleek new Central Station. And wow, what a building…all glass, wood and stainless steel…whose roof swoops out in a dramatic fold to embrace the city. It may have one of the largest rooftop solar projects in Europe but Alexander explains it’s not just about the brave new architecture. On a human scale, the square in front has become a lively meeting place at the city’s entrance. “It used to be a dead spot, now it’s full of life.” 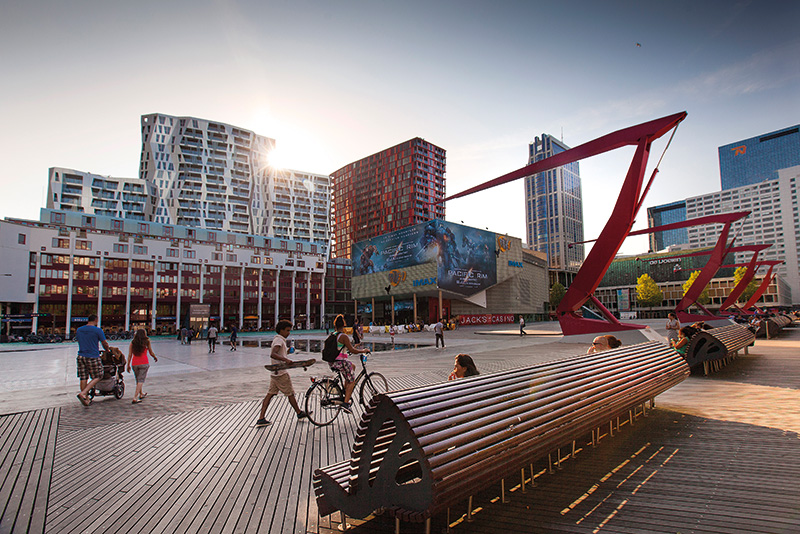 Right next door to the Station, Alexander points out one of his favourite buildings, the Groot Handelsgebouw, a huge business centre that is an icon of Rotterdam’s post-war reconstruction. “It’s almost like a small city in itself and its open-plan design makes it a terrific place to work as well.” I’m already seeing a pattern. Buildings here are not just architectural statements.

We cycle over Rotterdam’s exquisite Erasmus Bridge, named after the city’s native son, the Dutch Renaissance humanist Desiderius Erasmus Roterodamus. Linking the city centre in the north with the former docklands in the south, this sweeping elegant structure is called The Swan, for obvious reasons, and has become the emblem of a proud new Rotterdam.

To our right is the Cruise Terminal on Wilhelmina Pier behind which soar the high rises of what the locals call Manhattan on the Maas. Alexander tells me there is also a less favourable moniker: megalomania. Here a line-up of the world’s starchitects jostle their skyscrapers for attention beside the classy copper-domed Art Nouveau headquarters of the Holland America line. It was from this spot that thousands of Europeans immigrated to North America. 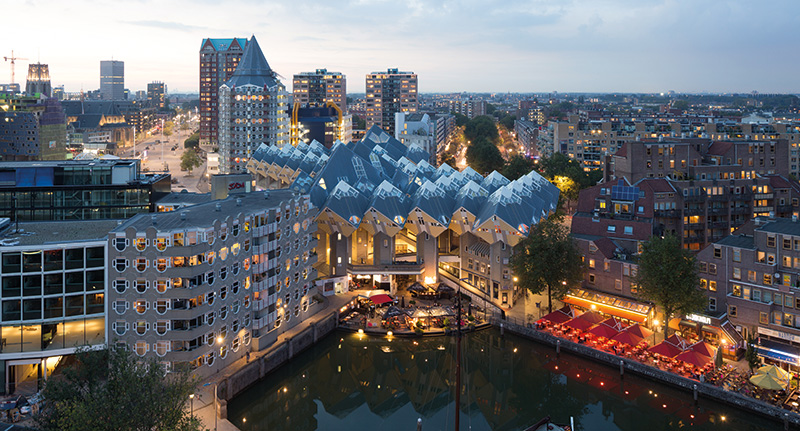 First cab off the rank was Norman Foster’s curved twin tower complex of the World Port Centre. At the other end, Renzo Piano’s KPN Telecom Building features his signature terracotta, glass and curtain wall systems. Plonked in the middle, Rotterdam’s very own Rem Koolhaas has usurped them all with his De Rotterdam, a hulking vertical city of three interconnecting steel and glass towers.

Across a new walking bridge, Katendrecht is evolving from its seedy roots as Rotterdam’s Red-Light district to a Post-Modern urban residential area. Here in an old coffee warehouse, Fenix Food Factory has become a hipster hub with a street food vibe that offers artisanal bread and cheese, good coffee and craft beer. It’s also the headquarters of this year’s Architecture Biennale whose theme is The Next Economy.

Back in the city centre, Alexander shows me a food centre of an altogether different size and hue. Rotterdam’s bold new Markthal might look like a giant hollow caterpillar but, beneath its swooping 40-metre arch, the Netherlands’ first covered market is nothing short of whimsical. Its colourful, hyper-realist, Pop-art ceiling mural of flowers, fruit and insects could even be seen as Rotterdam thumbing its nose at those Old School 17th century Dutch still lifes. The building is even more surprising when you realise it doubles as an apartment block whose windows peer down on the market stalls from behind those enormous raspberries and wheat stalks. 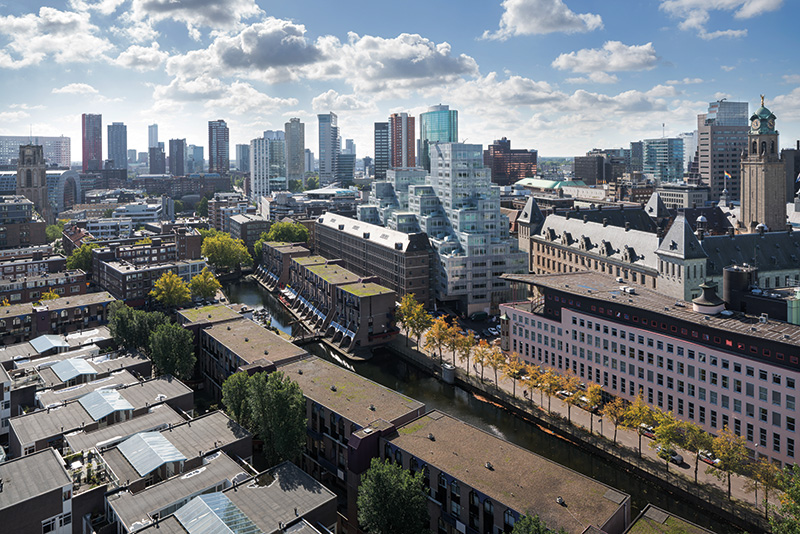 Across Blaak Market Square, Alexander shows me another quirky architectural icon, the Cube Houses. In the late 1970s, Rotterdam’s municipal council wanted to develop some inner-city housing with a little personality on a difficult site. Idiosyncratic architect Piet Blom turned out to be just the man for the job. Needing to link the harbour with the traditional market area over a seven-lane arterial, he designed three interlocking buildings that included a hexagonal tower that looks like a sharpened pencil and 40 bright yellow cube-shaped houses tilted at an angle of 54.7 degrees. Those cubes were his forest of tree houses set on pillars above the traffic noise…a safe little village above the main city.

Blom’s idiosyncratic design solutions for human needs within urban spaces paved the way for future Rotterdam architects to continue the city’s original design aesthetic. Alexander ends our bike tour by showing me Rotterdam’s latest inspired urban space. The 350-metre yellow Luchtsingel (air canal) pedestrian bridge is the world’s first crowd-funded public infrastructure project. It runs through a building and above roads and railways to connect disparate neighbourhoods and revitalise a dilapidated part of the city. Along its pathways, he shows me a rooftop vegetable garden, a start-up incubator, a design shop and studio, and an outdoor beer garden that, he says, is the only place to be on a sunny Friday afternoon.

It’s all pretty thoughtful for a tough no-nonsense kind of town. •

GETTING THERE
From Australia KLM offers over 500 weekly flights to Amsterdam and over 80 European destinations thanks to its codeshare (Malaysia Airlines, China Southern, Etihad Airways) and interline partners. Qantas flies to Amsterdam, via Dubai, where you can connect via rail to Rotterdam
• KLM: 1300-392-192; klm.com.au
• Qantas: 131-313; qantas.com

WHEN TO GO
The best time to visit is during the warmer months from May to October.

WHERE TO STAY
• The boutique Hotel New York is located in “The Grand Old Lady” headquarters of the Holland America Line. The building is dripping with maritime heritage so choose a room with a water view. Luxe suites sport fireplaces and free-standing tubs. hotelnewyork.nl
• The grand SS Rotterdam was launched as a cruise ship in 1959. Today she is a fully restored hotel moored permanently on Katendrecht. The Lido is Rotterdam’s largest terrace, perfect for cocktails and a meal while cooling your toes in the deck pool. ssrotterdam.com
• Hotel Nhow Rotterdam is part of the sleek new waterfront De Rotterdam building. The clean-lined rooms have floor-to-ceiling windows, modern designer furniture and bathrooms fashioned from recycled glass. nh-hotels.com/hotel/nhow-rotterdam
• For stunning views over the city, stay in one of two suites (Heaven and Stars) on the panorama platform in the 1960s Euromast tower. euromast.nl/en