The year 2017 was the year that Rolls-Royce elevated Bespoke to unprecedented new levels, resulting in one of the most significant years for Bespoke in the 114-year history of the brand.

The Rolls-Royce Motor Cars Bespoke department, an extraordinary collective of designers, engineers and craftspeople, has put forward a snapshot of some of the finest examples of Bespoke design and craftsmanship to be completed by the luxury house over the past 12 months. 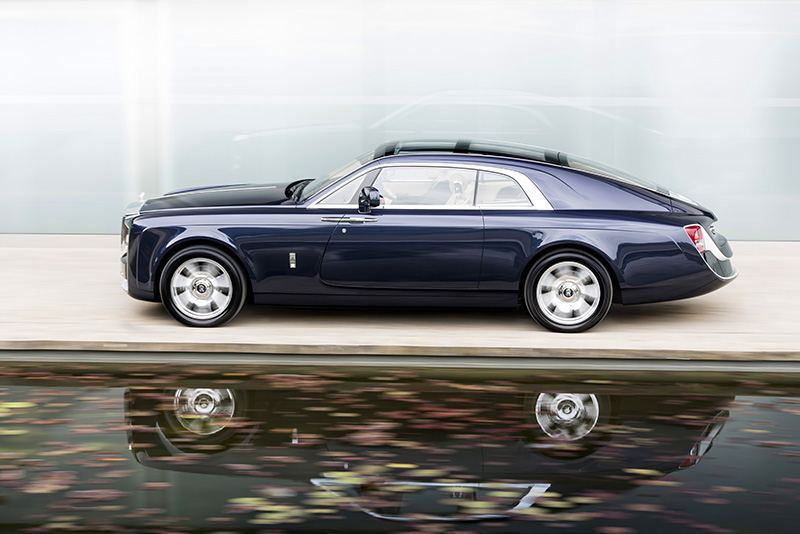 Having made its premiere in 2017, ‘Sweptail’ – the realisation of one customer’s coachbuilt dream – features a bold design that embraces the marque’s heritage as the world’s leading coachbuilder whilst reaffirming its pinnacle position in Bespoke personalisation.

The design takes inspiration from and pays homage to the world of racing yachts, shaping a completely new perception of a dramatic Rolls-Royce coupé.

This automotive equivalent of Haute Couture draws on the lineage of the 1920s and 1930s Rolls-Royce motor cars, with the end result a contemporary masterpiece.

New Phantom and ‘The Gallery’ – An Art Gallery on Wheels 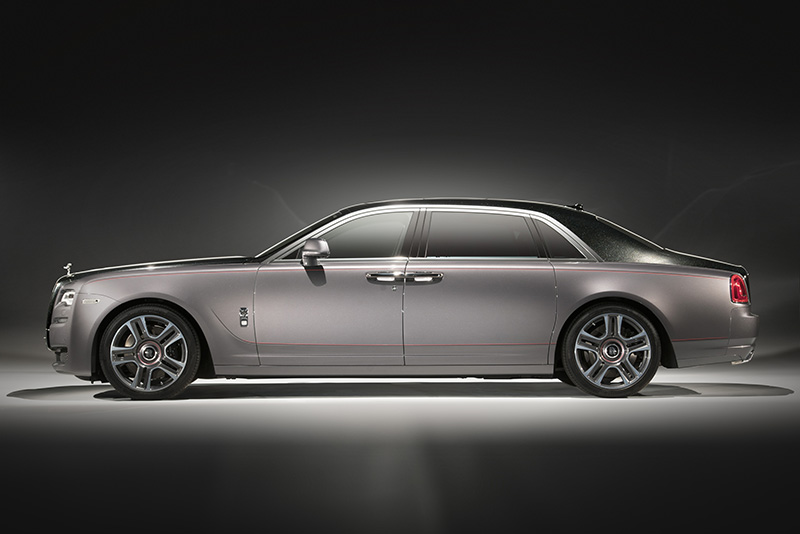 At the heart of the new Rolls-Royce Phantom’s design aesthetic is ‘The Gallery’, a contemporary and luxury reinterpretation of a motor car’s dashboard and instrument panel.

‘The Gallery’ is an innovation that furthers Rolls-Royce’s unparalleled Bespoke vision and mastery of materials and craft.

Dawn and Wraith at Porto Cervo 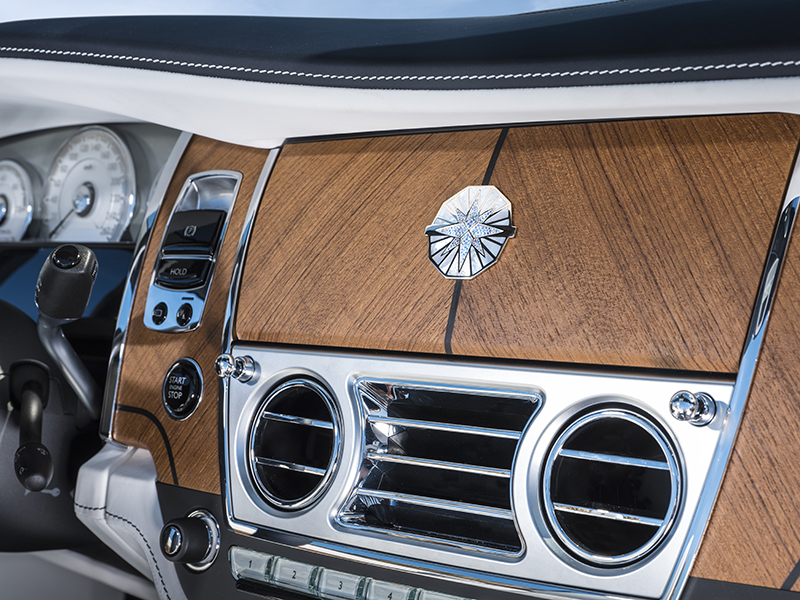 Two unique motor cars were created in honour of the 2017 Rolls-Royce Summer Studio, Porto Cervo, Sardinia. A Bespoke Dawn drophead coupé, and a Wraith Black Badge were commissioned to encapsulate the essence of this beguiling island.

Dawn adopted a nautical theme, evoking emotions of a languid Mediterranean sojourn. The Porto Cervo motif, encrusted with genuine Sapphires and Mother of Pearl, is embedded into the front facia, while navy blue and arctic white hues complement an expanse of teak, including the decking and floor. 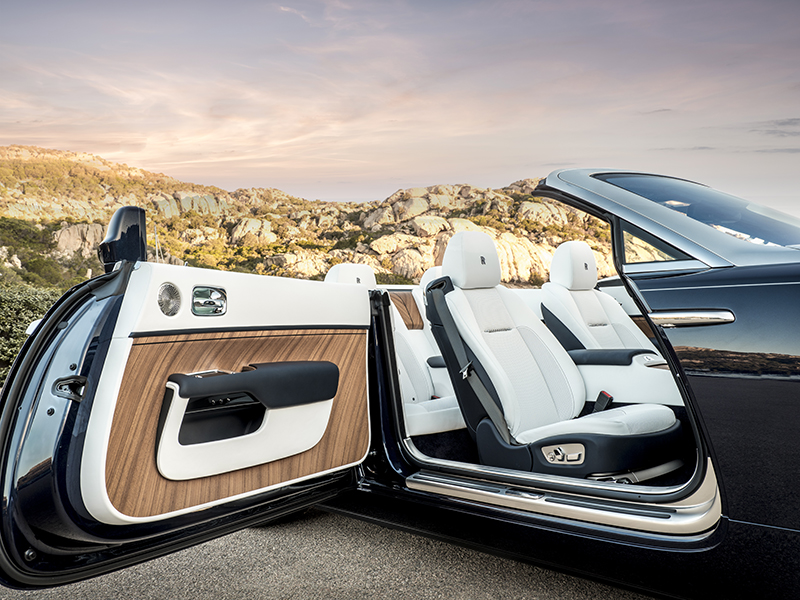 A special, one-off commission unveiled in Dubai in 2017, the Bespoke ‘Spirit of Calligraphy’ Ghost draws its design inspiration from the ancient art of Arabic calligraphy. Words are harmoniously moulded into shapes, creating a unique effect where texts and images become one.

Sir Henry Royce’s resonant words “Take the best that exists and make it better. When it does not exist, design it”, in their Arabic form are shaped into Rolls-Royce’s flying mascot, the Spirit of Ecstasy. 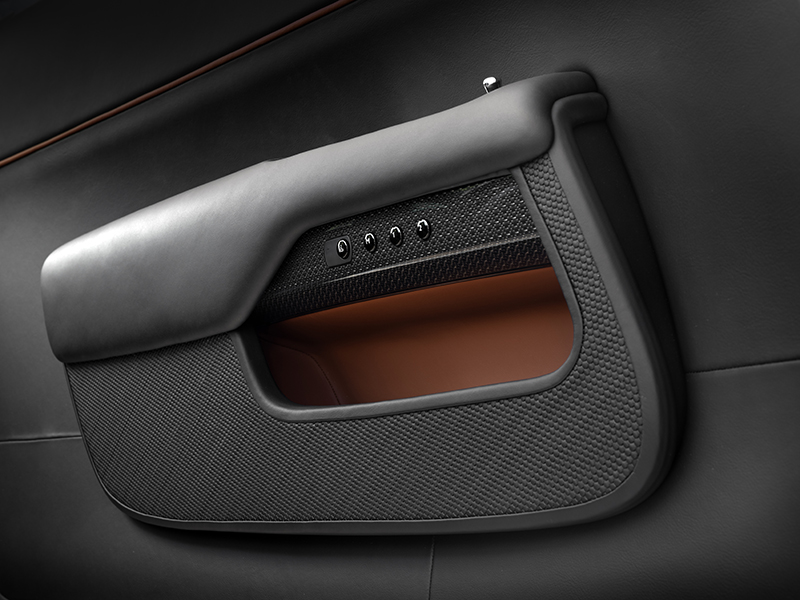 Commissioned for an individual collector, the Ghost ‘Elegance’ raised the bar of Bespoke by becoming the first motor car to be finished in a paint infused with diamonds. Named ‘Diamond Stardust’, the unique paint incorporates 1,000 diamonds crushed to form a very fine powder, giving the finished panels unmatched lustre and sparkle.

The flanks of the motor car are highlighted with Mugello Red and Black twin coachlines, reflected inside with black leather seats and accents in Mugello Red, carried through stitching on the doors and piping on the seats. 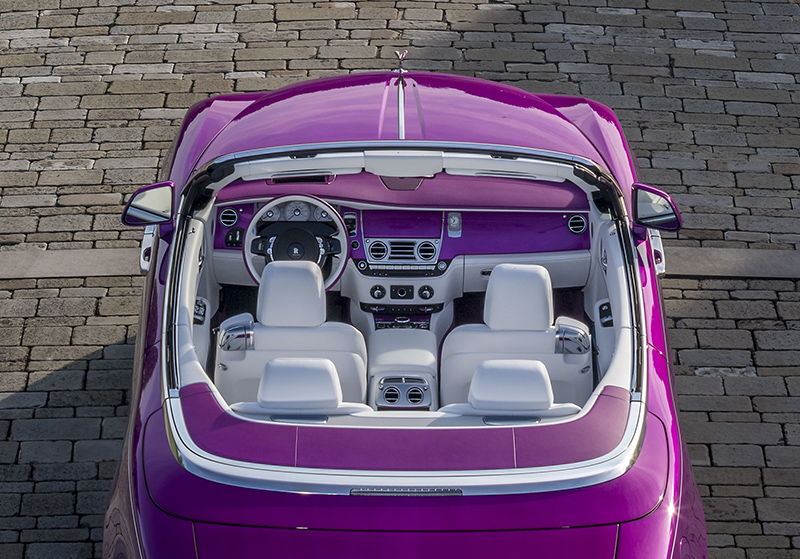 In 2017, US collector Michael Fux was presented with his tenth Bespoke model from Rolls-Royce Motor Cars. Following a visit to Pebble Beach in 2016, where he collected a cluster of eye-catching fuchsia petals, he challenged the Bespoke team at Goodwood with a commission to bring a striking new colour to Dawn.

Subsequently unveiled during The Quail automotive gathering in California, the vibrant ‘Dawn in Fuxia’ represents the addition of another unique hue to the Rolls-Royce Colour Collection, and is reserved exclusively for Mr. Fux to use.

‘Dawn B50’ for Hotel Byblos 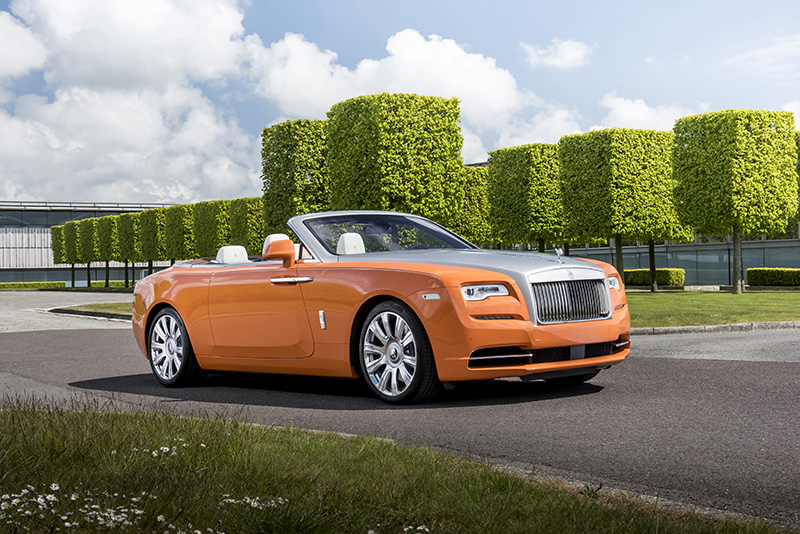 In celebration of the 50th anniversary of the Hotel Byblos in Saint-Tropez in 2017, Rolls-Royce Motor Cars revealed the ‘Dawn B50’, a unique motor car inspired by the warmth and vibrancy of the Côte d’Azur.

Commissioned by the Hotel Byblos as the automotive ‘Jewel of Saint-Tropez’, the Dawn B50 exudes two dominant exterior colours, developed exclusively to celebrate the hotel’s anniversary.

The sophisticated interior takes inspiration from the intense Mediterranean sun, with vibrant tangerine tones that accentuate the dashboard and echo the stitching across the seat upholstery and floor mats.

Homage to a special Silver Dawn 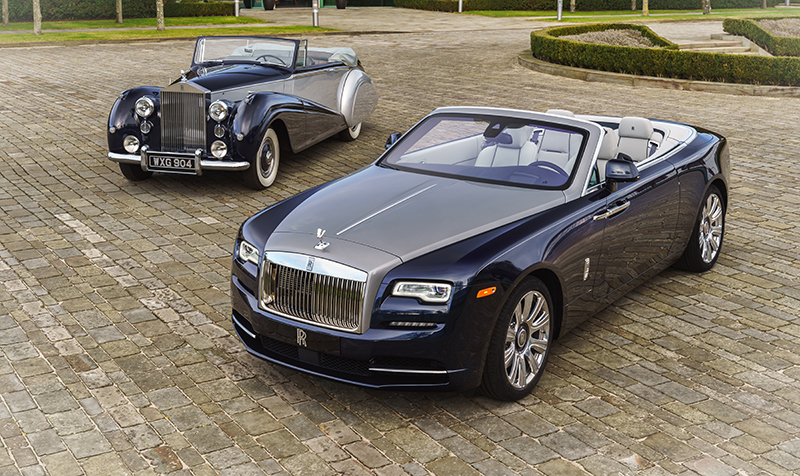 Prominently displayed at the Home of Rolls-Royce is a remarkably rare 1952 Silver Dawn, one of very few ever made. It was sold new to a customer in Canada, and in 2017 a commission for a new Dawn from the same country led to a beautiful homage to this particular car in its 65th anniversary year. 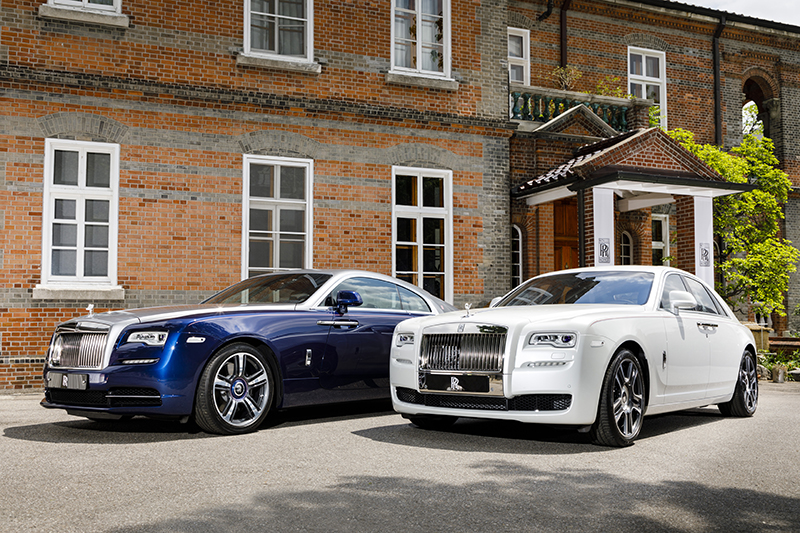 The ‘Bespoke Collection for Korea’ unveiled at the British Embassy in Seoul, embraced the aesthetic heritage of South Korea with a contemporary flare.

The Ghost Seoul Edition reflects colours that grace the country’s Taegukgi national flag, finished in bright Andalusian White with a twin coachline in Cobalto Blue and Mugello Red – along with a hand-painted Bespoke motif that captures the silhouette of the iconic Namsan Seoul Tower.

The ‘Wraith Busan Edition’ is inspired by the hues of the coastal city of the same name, with a two-tone exterior in Royal Blue and Jubilee Silver that conjures up the shimmer of the surrounding sea. The rear pillar motif echoes the delicate latticework of traditional Korean ‘hanok’ screen doors, and is also carried inside the car across the dashboard.