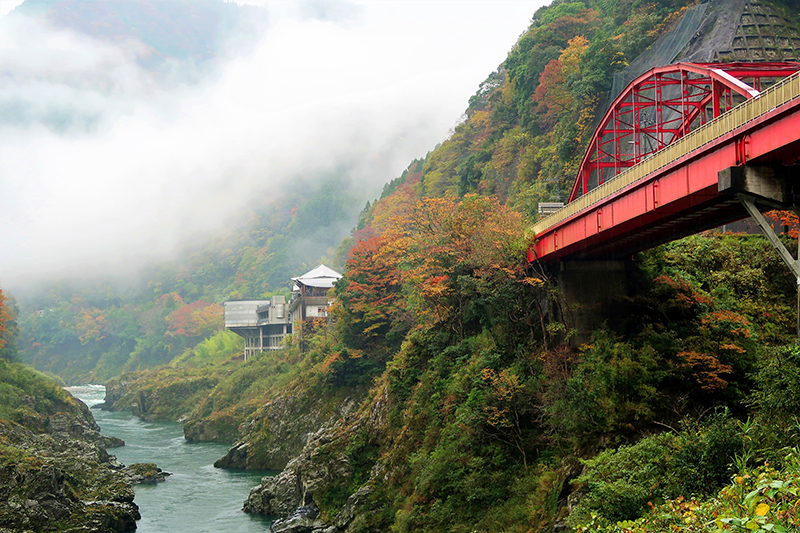 In a land of steep and rugged forest where samurai once took refuge, today’s stressed urbanite can equally find solace. And if you’re truly seeking to re-energise with nature, then Tokushima Prefecture, Shikoku, the smallest of Japan’s four main islands, might just tick the box.

In contrast to neon-lit, urban Japan, this is Japan of old. Centuries-old traditions are preserved and practiced, local dialects baffle mainlanders, bridges are made of vines and anchored to towering cedar trees, and hitchhikers still get picked up – amid a backdrop of deep ravines. 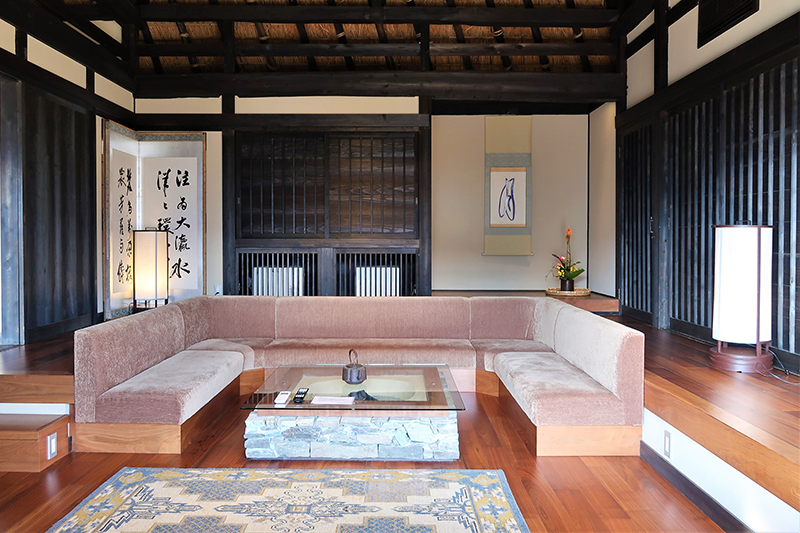 The centrepiece of this mostly rural island is a mountain range that nudges 2000 metres. Ingenuously, towns and villages hug its cliff faces, farmers toil tiny tiered plots, and precarious paths and roads weave through stunning scenery, every turn revealing a new charm.

Pack your activewear, too, because this is a natural wonderland that serves up canyons to explore, mountains to hike, hills to cycle, gorges for white-water rafting, rivers for boating, and hot springs to soak in.

Most of the fun takes place in the western region of Tokushima Prefecture, known as Miyoshi City, where two main rivers carve the landscape – Yoshino River and Iya River.

Go with the flow on the Yoshino

Yoshino River, almost 200 kilometres long, flows from a neighbouring mountain through the narrow gorges of Oboke and Koboke. Sightseeing cruises with English commentary are available at the more placid waters of Oboke while white-water rafting is all the rage at the rapids at Koboke, host of the 2017 World Rafting Championship. 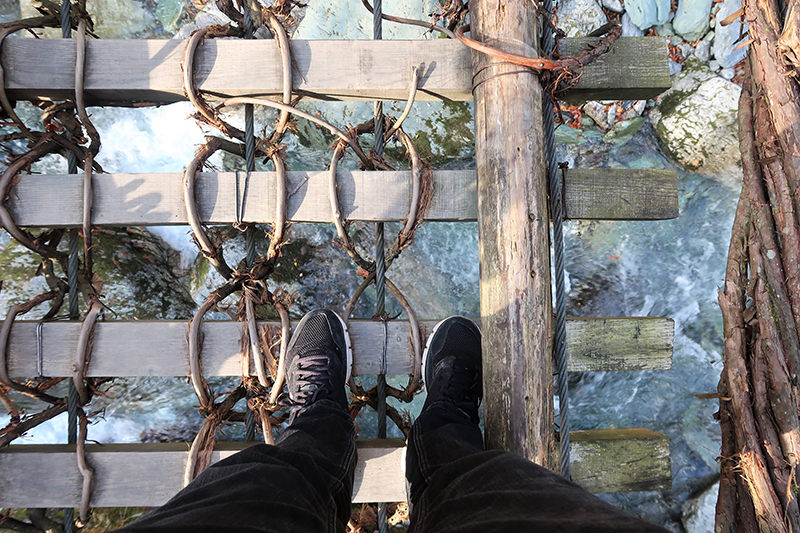 Together, the gorges provide eight kilometres of postcard scenery, which you can drive through, catch a train along, or walk through in some parts. Emerald waters, crystalline rock formations, red bridges and slopes of trees – red, green, yellow, orange, or snow-white depending on the season – are the signature images of Oboke and Koboke.

The gorges here are more accessible and popular because of its wider roads and proximity to shops, train stations, bus stops, hotels and Japanese inns. High above Oboke, you can stay with local husband and wife hosts Masami and Noriko Kudo, who’ll treat you to a Japanese barbecue, comfy bed, breakfast feast, and an early morning drive further up the mountain to witness unkai – the rare natural phenomenon when mountain clouds resemble valley waters.

Legends of the Iya 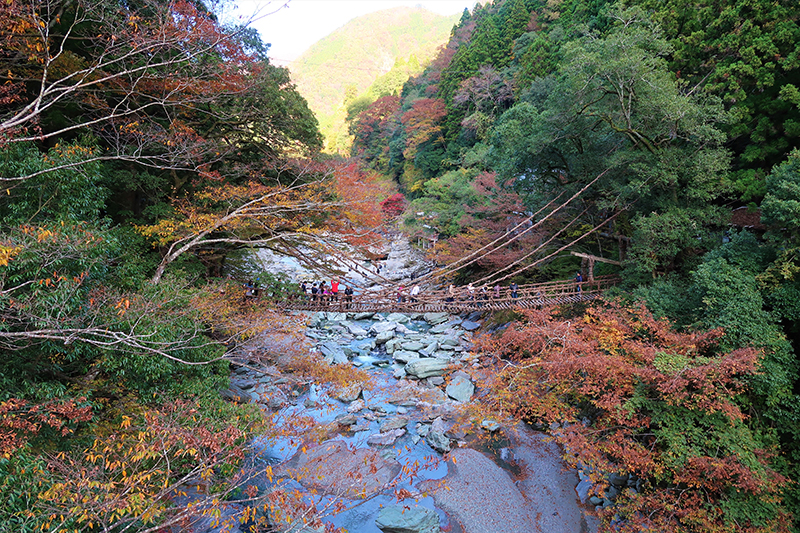 A bronze statue of a peeing boy perched on a ledge 200 metres above the Iya River takes centre stage against a magnificent Iya Valley vista. Visitors spend considerable time trying to capture the iconic image, which is a tribute to local boys who prove their ‘manhood’ through hazardous peeing.

Three vine bridges entwined with samurai legends cross the Iya River at various points. Rebuilt every three or four years with local vines, the bridges stretch up to 40 metres and are two metres wide. Careful does it as you cross torrents while creaking, swaying and minding the gaps between the planks. 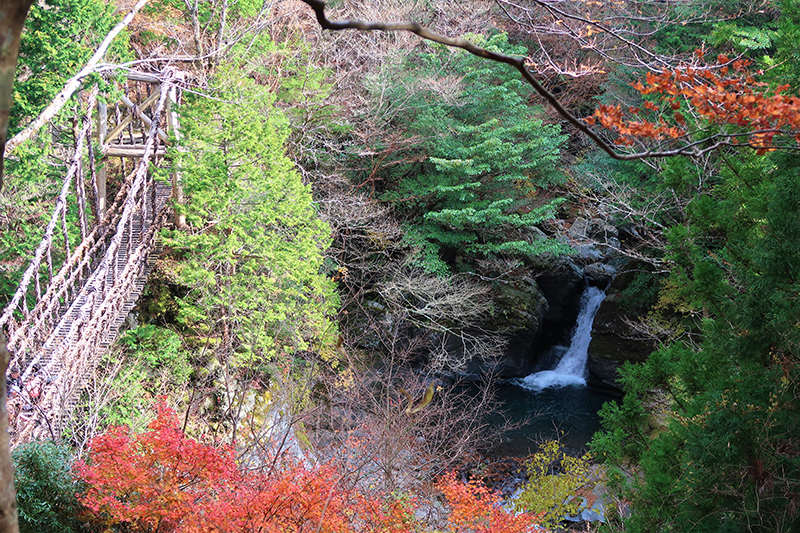 The largest and most visited bridge, Vine Bridge, is tied to cedar trees on the banks of the river. Further east, the smaller and more remote twin bridges, Double Vine Bridges, sway more peacefully. Legend has it that the bridges were made of vines so that samurai could quickly cut them to isolate any encroaching enemy. The river once boasted 13 such vine bridges.

On the way to Double Vine Bridges, Nagoro village provides another oddity. In what might seem ordinary scenes of people waiting at a bus top, farmers in the fields, workers snoozing on the job, neighbours sitting on porches, gardening and gossiping, something else is it play. Life-sized dolls dressed in real clothes and positioned in natural ways are what populate this one-street village.

Around 15 years ago, local resident Tsukimi Ayano started creating the dolls to boost the village’s declining population. To date, she’s increased it by 200, and now holds workshops and receives commissions to create dolls for local hotels and attractions. Officially, the population of Scarecrow Village, as it’s known, is around 30. 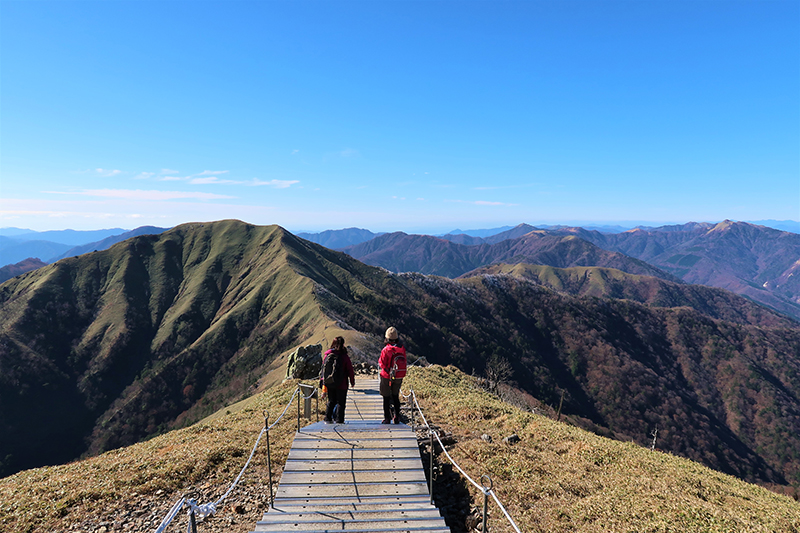 Not far from the Scarecrow Village is where the Iya River begins its flow from Mount Tsurugi, a hiker’s paradise standing at 1995 metres. For help reaching the summit, take a 15-minute chairlift up to 1750 metres from where it takes less than an hour to climb, passing shrines, icy trees and frosty dwarf bamboo. Once there, a mountain hut serves up hot food, drinks and accommodation, and boardwalks with seating provide respite with incredible views.

To help solve the problem of wild deer eradicating mountain flora, expect to see it featured on restaurant menus. For a modern twist and with views of Ochiai Village, a national historic treasure, you can sample deer sausages at Cafe Nakochi, and stay in one of eight restored and meticulously renovated thatched-roof farmhouses, all with mod cons. Or for a more hands-on dining experience, head to Tsuzuki Soba House to make Iya soba noodles to accompany deer tempura. Devour chrysanthemum tempura as well. Not that the flowers are a pest, rather a local delicacy.

Dip in a hot spring
Strategically placed hotels in the area take advantage of the natural terrain by presenting interesting onsen experiences, with many of the hot spring baths regarded as being the best in Japan. 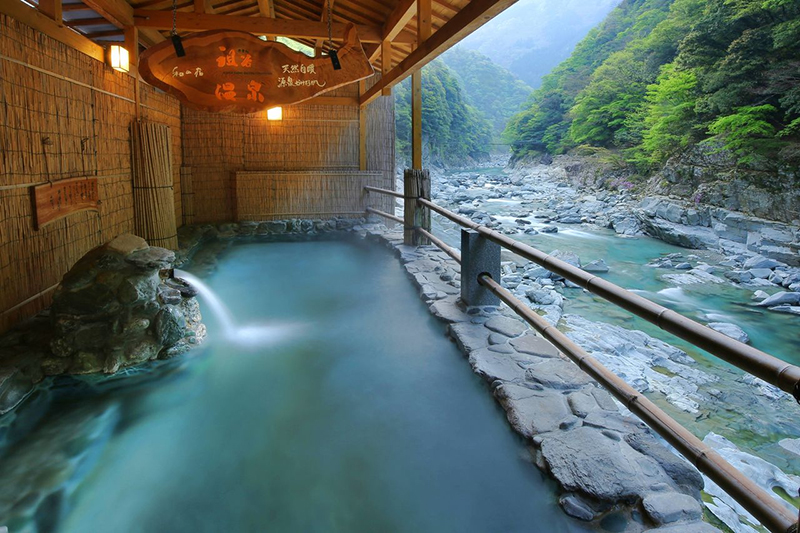 The good news is you don’t need to stay at the hotels to enjoy the breadth of hot baths in the wilds, as most hotel onsens are open to the public. Prices vary but hover at about $20, which is a bargain for such an experience.

At Hotel Kazurabashi, you catch a cable car up the hill to the onsen area for classic mountain views, gardens, hot baths, tubs, sauna and footbath. Conversely, at Hotel Iya Onsen, you catch the cable car down to the river’s edge for a warm, as opposed to hot-hot, bath straight from the spring’s source.

While waiting for your ride, seed is on hand to feed tiny birds. Over at Hotel Obokekyo Mannaka, the elevator heads underneath the building for gushing river scenes and sounds. Guidelines and protocols are well explained in English. 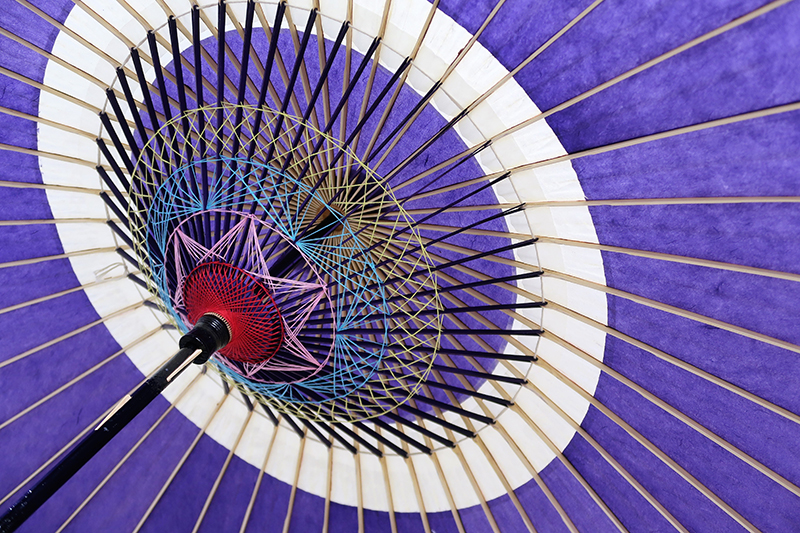 Head to in Wakimachi, Mima to soak up history and culture, particularly remnants of Japan’s indigo dyeing industry, where the wealth created more than 300 years ago is on full display. Walk down Udatsu Old Street for a time-capsuled look at elaborate houses, and step into them to watch artisans whittle intricate bamboo figurines, craft wagasa (Japanese umbrellas), and to make your own indigo handkerchief.

It’s still widely known that the leaves of the local indigo plant still produces the dye. Indigo is the colour of Japan and has even made its way into the Japanese team uniform for the upcoming Winter Olympic Games. 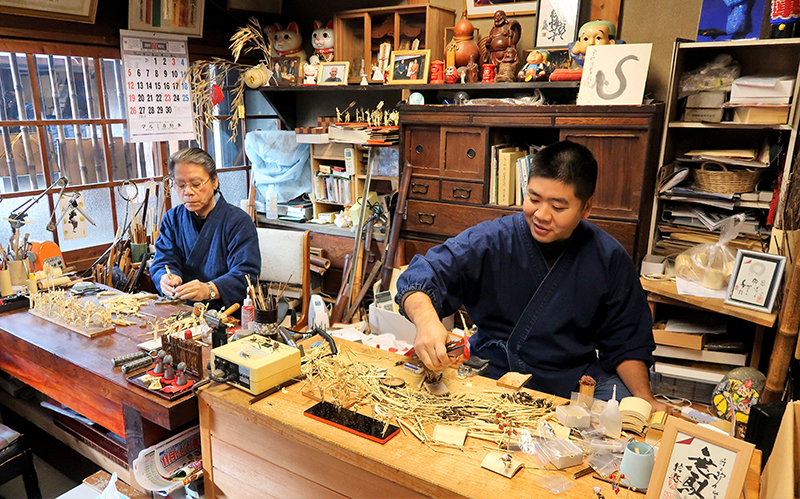 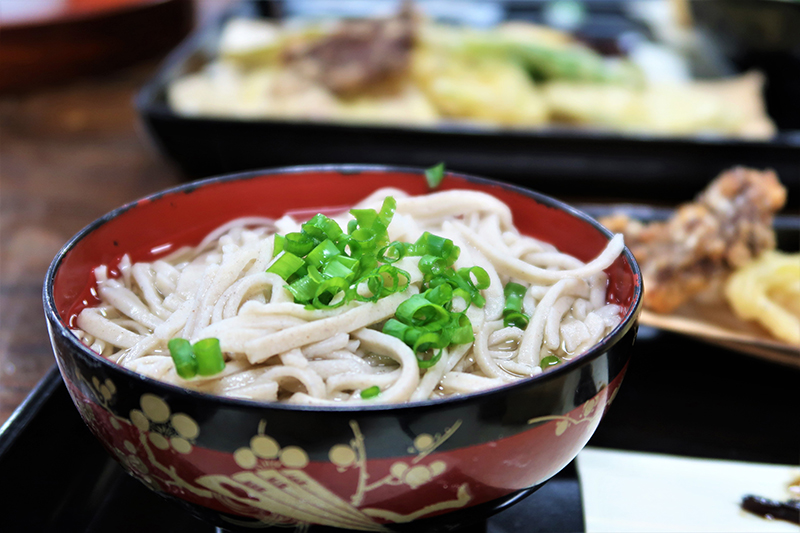 Today, Mima’s reputation also extends to sake. The current sake rock star, a 15th generation toji (sake brewer), is Ryoichiro Mamiya (he plays in a band, too). He is known for his distinctive tastes and his trademark, edgy bottle labels feature manga, guitars and song titles, attracting attention from aficionados as far as Australia. Look out for Miyoshikiku Sake.

Autumn is indeed a spectacular time to visit Tokushima, marking the start of the sake-making season, from which there is no escaping. Up at Fuwari, a mountainside restaurant, sake is added to its miso.

The warm glow is unmistakable. Japan has a habit of doing that to you. • 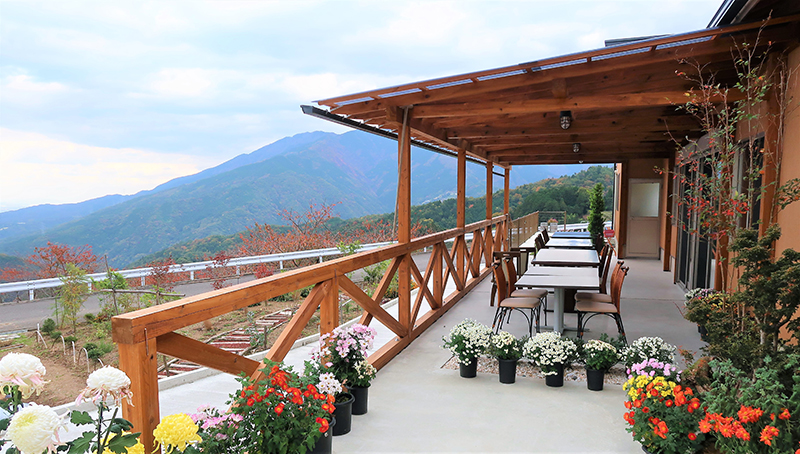 Getting there
Qantas and Japan Airlines fly daily to Tokyo from Sydney, Melbourne and Brisbane. Japan Airlines flies daily from Tokyo Haneda to Tokushima. Buses are available from Tokushima Airport to Tokushima Station for the train journey to Oboke Station: qantas.com, jal.com.au, jr-shikoku.co.jp/global/en/

Getting around
Local transport includes train, buses and taxi, but rental car is by far the best way to get around and for airport transfers. Rental cars are available from Tokushima Airport and near train stations.

When to go
For autumn splendour and cooler hiking, visit early October to late November.