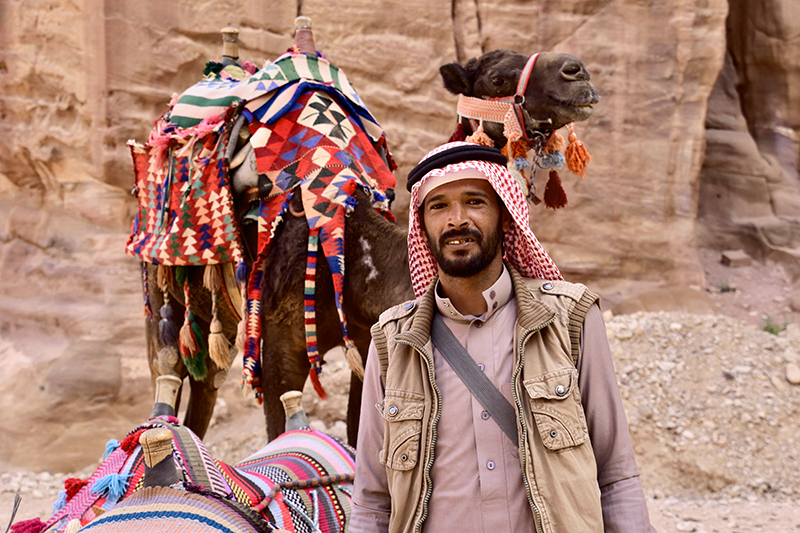 It’s about 10 in the morning when Hussein Hafedh Albidul canters into the ancient city of Petra, in Jordan, astride Camel No. 11, sending puffs of dust into the air while talking into his smartphone. These so-called ‘ships of the desert’ have been the preferred mode of transportation in Jordan for centuries and they play a pivotal role in Petra, the city the Nabateans chiselled and carved into the sandstone cliffs around 300BC. 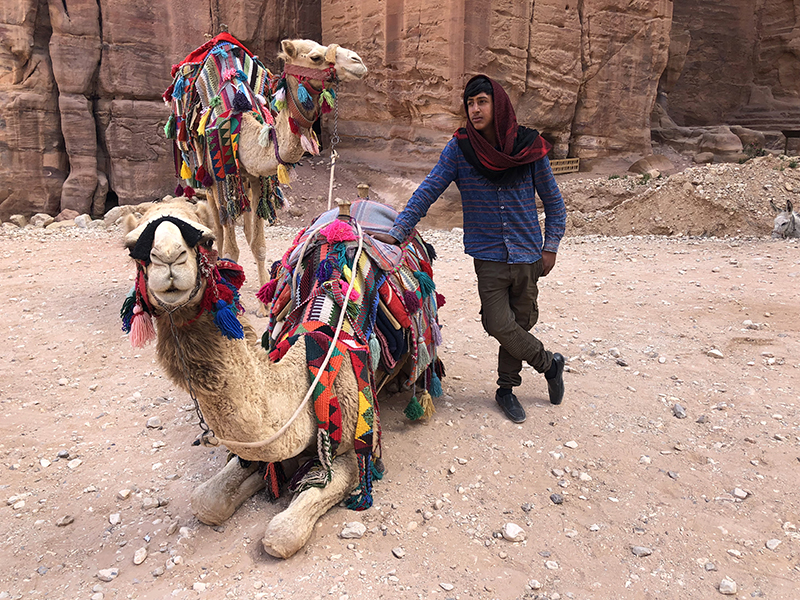 Camel caravans and commerce
Although it adds to the historical atmosphere to note that Petra today is still built around camel caravans and commerce, the fact ‘Free Wi-Fi’ is inked onto Albidul’s camel with a Sharpie also indicates someone has pressed the fast-forward button on this historic trade route in the Middle East. And there’s no rewind function. Cue the orchestral chorus of Raiders of the Lost Ark, which was released four years before Albidul and his family were moved out of the cliff-carved cave where he was born and into a village – built by the late King Hussein of Jordan – where he still lives today. 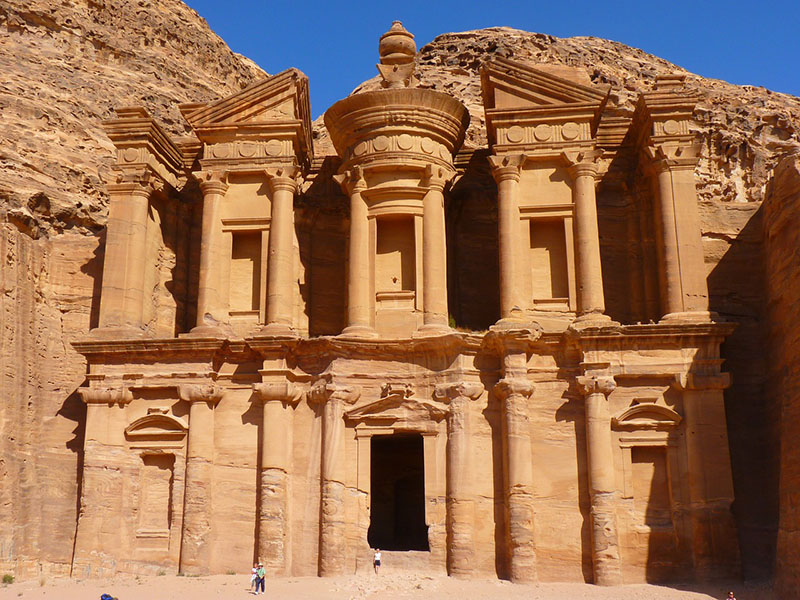 Desert dwellers
Like most of the descendants of the local nomadic Arab people, Albidul identifies as Bedouin, which means ‘desert dweller’ in Jordan. “I am very proud to be Bedouin,” says Albidul, after sliding effortlessly off the side of the long-necked ungulate, which has been decorated with colourful neon tassels and pretty patterned blankets. “Bedouin are the people who move from place to place and that is what it means to be a Bedouin in Jordan. It’s about freedom and not having anybody control you,” he says. 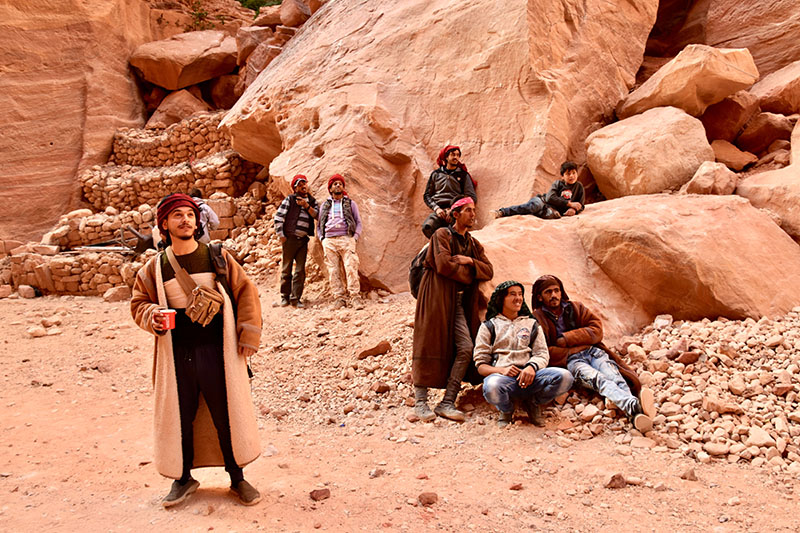 Wonder of the world
When Petra became a UNESCO World Heritage site in the mid-1980s, Albidul was 10. Although he was forced to abandon his nomadic life for the nearby settlement of Umm Sayhoun, Albidul says he is happy to move with the times. “I grew up with the camels, sheep and goats and donkeys and I still make my business and living in the area where my ancestors are from. Now we live in the hills and the King has given us houses and we have a school and the Internet and that is much better for a modern life in Jordan,” says Albidul, whose kohl-rimmed eyes are as dark as liquorice. 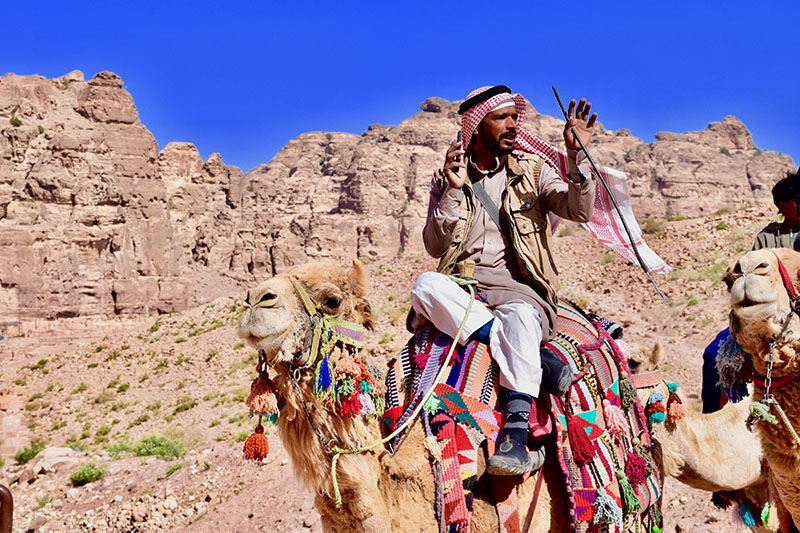 Rose-gold light
Like most of the local Bedouin men, Albidul is wearing a red-checked keffiyeh to protect his face from the blazing sun, which has rendered the façade of Petra’s most elaborate temple, Al-Khazneh – The Treasury – in a rose-gold light. The first glimpse of The Treasury is revealed via an oversized fissure at the end of the Siq, a river of cobbled stones that leads to the ruined city, spread out like a jumble of ancient dollhouses. 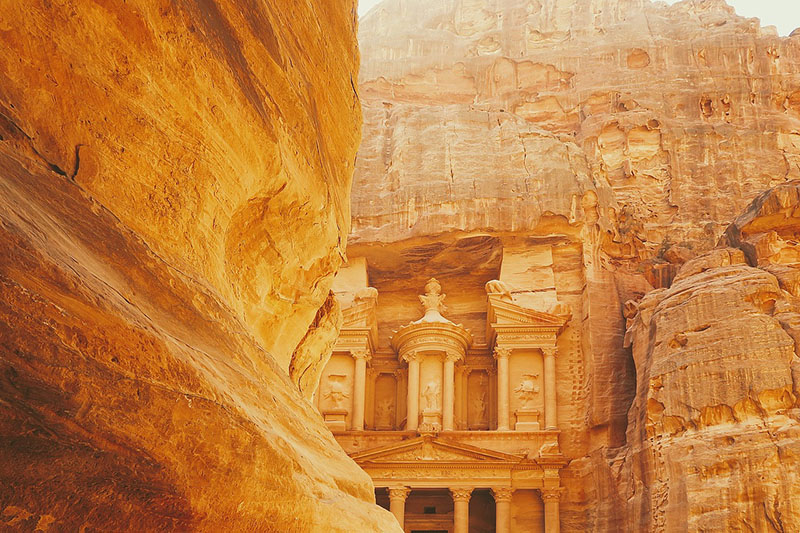 Exploring the Old City
In addition to offering tourists rides on camels and donkeys or via the horse-drawn rickshaws that tear through the Siq at breakneck speed, many of the Bedouin in the Middle East nation now work in the shadows of the old city as modern-day merchants, offering directions to the nearest ATM using WhatsApp. Instead of selling spices and ivory, they spruik souvenirs, soft drinks and snacks in and around the labyrinth of ruined buildings, which includes a Roman amphitheatre, monastery, High Court and sacrificial altar. 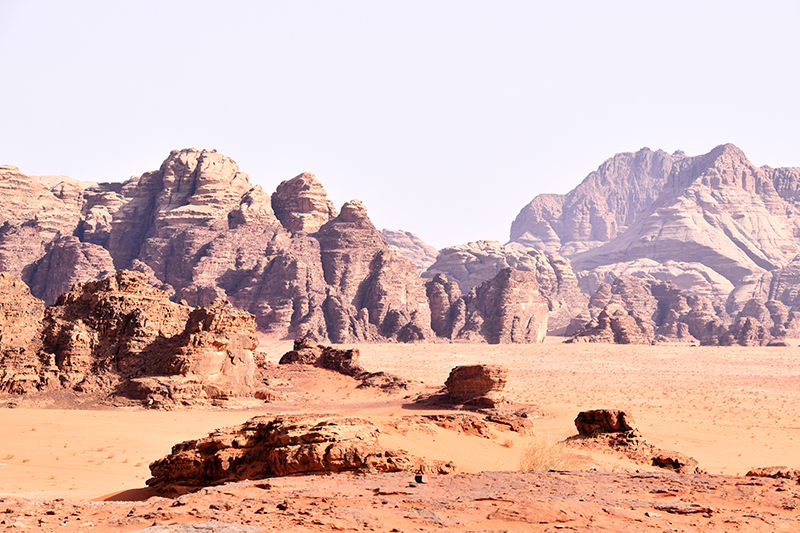 Ships of the desert
Wadi Rum, also known as the Valley of the Moon, is another other-worldly landscape that is a must-visit while in Jordan, in the Middle East. After driving through the rust-hued desert in the back of a battered ute, we climb to the top of a vast mountain of crimson sand to admire a landscape dotted with sheer-sided monoliths and gothic Gaudi-like structures that resemble melting cathedrals, falling in on themselves. 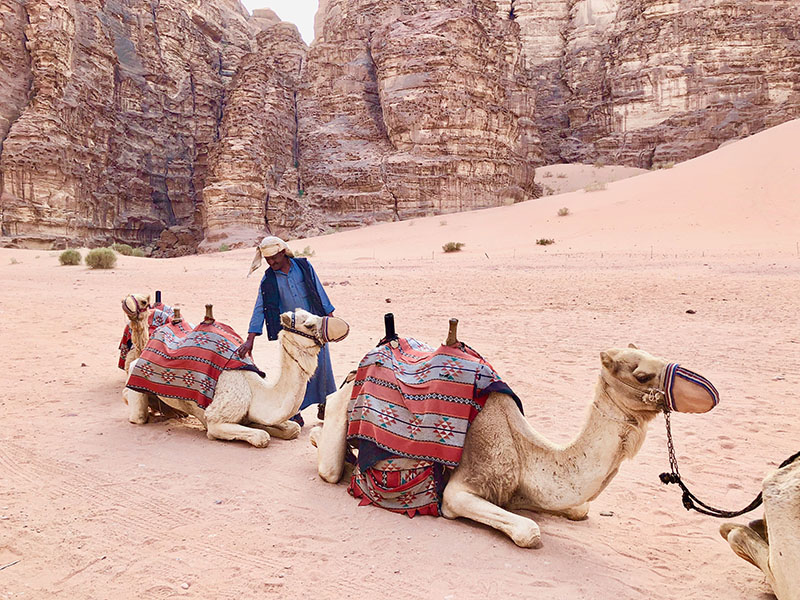 Epic journey
After a short drive through the desert, where films such as Ridley Scott’s The Martian and the 1962 epic Lawrence of Arabia were shot, we meet with a robed guide who organises our four-strong group onto camels for a slow, plodding trek through the rippled sands. It doesn’t take long for our colourful caravan to lumber into a shared rhythm as the dramatic silence of the desert descends. After about half an hour of sticking to the curves of these surrealist sandstone sculptures the camels collapse their ungainly legs beneath them like origami animals outside a Bedouin camp where we stop to feast on a delicious spread of hummus, pickles, maglouba stew and flatbread. 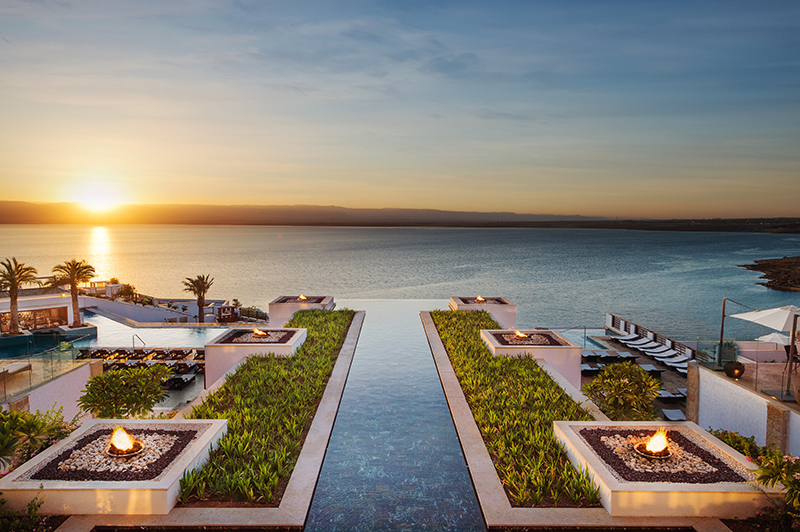 A celebration of history
With the day’s dust clinging to our hair and clothes, we pick up the pace in a mini-bus for the four-hour journey along the King’s Highway, which traces the ancient Arabian trade route and leads us to the Dead Sea, another intriguing place to visit while in Jordan and the Middle East. The Hilton Dead Sea Resort & Spa overlooks this famous body of water and it’s a triumphant feeling to be one of the first to float in the viscous, salty sea at sun-up, with Israel and the West Bank hovering in the hazy distance. 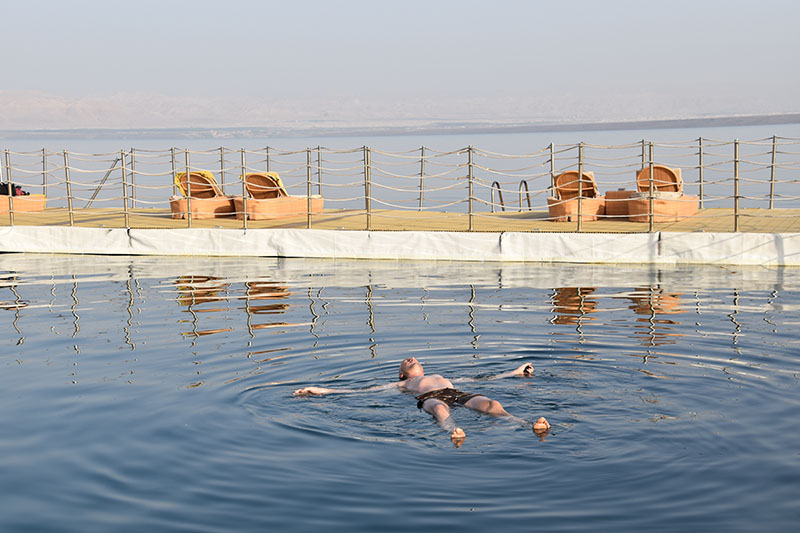 Mud and the Mediterranean
The ‘sea’ according to our tour guide, Mohammad Awimer, “is actually a lake and one that is fast-disappearing at a rate of about one metre per year”. To float in the sea – which marks the lowest point on Earth – is, as expected, a slightly discombobulating experience: in addition to the feeling of bobbing like a cork on the surface of the water, the intense salinity needles into all those cuts and grazes you didn’t know you had. 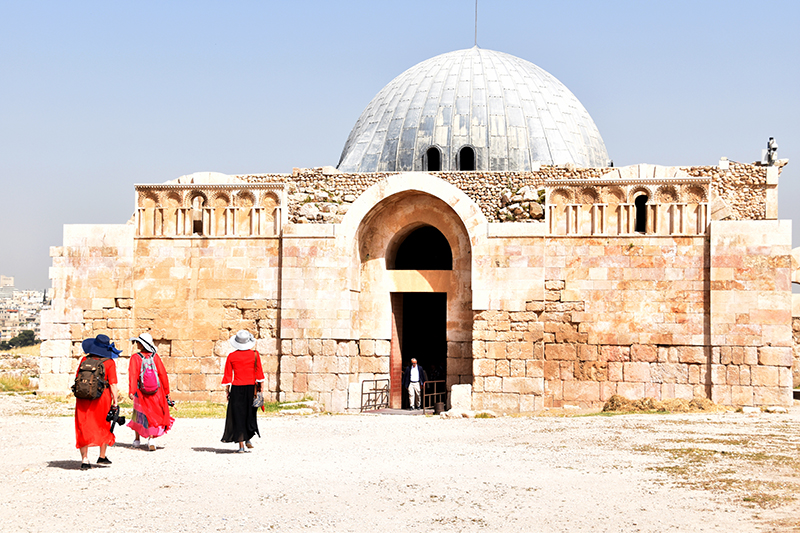 Amman is considered the oldest capital in the world and is a great jumping-off point for Jerash which is where landmarks such as Hadrian’s Arch, an ancient hippodrome and Temple of Zeus are located. 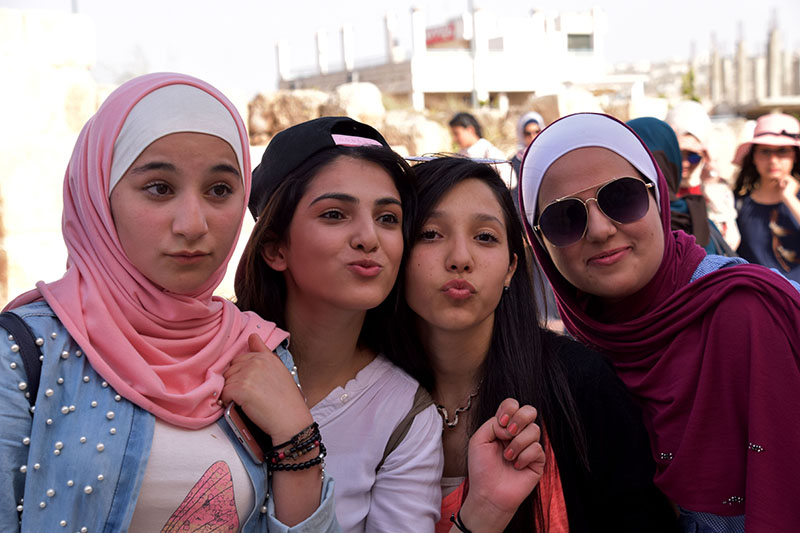 While in the beautifully ruined city, we watch schoolgirls doing duckface and taking selfies in the collonaded street that is the architectural spine of Jerash and join visitors from around the Middle East wearing dishdashas and dancing to the loud screeching beat of bagpipes in the South Theatre, constructed 90-92 AD. 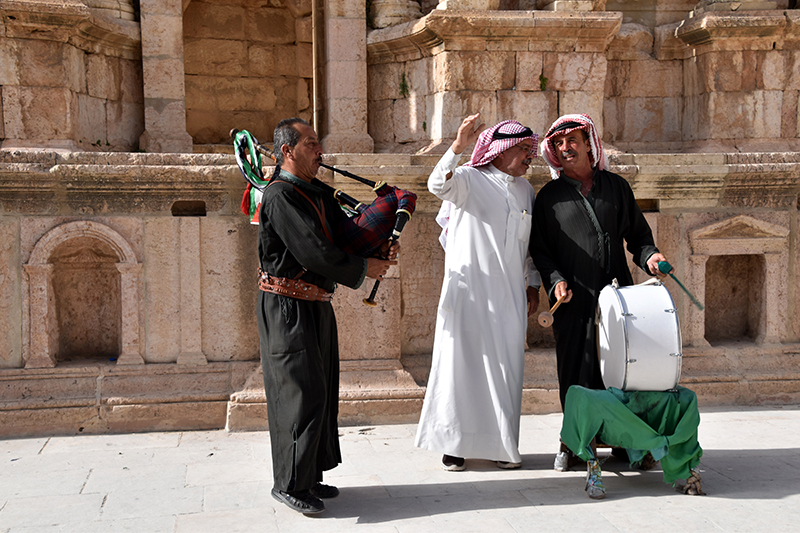 A feast for the senses
As far as backdrops go, Amman’s mix of boxy white homes, ancient treasures and minarets clinging to the hillside make it an exciting city to explore. In addition to wandering around its rambling ruins from the Roman, Byzantine and Umayyad periods, visitors to Amman should explore the arty Jabal Amman district, wander around a labyrinthine souk and grab a table at Hashem, an informal vegetarian restaurant that, according to our guide, Awimer, is a favourite of King Abdullah II and his family, as the framed photograph on the wall attests. 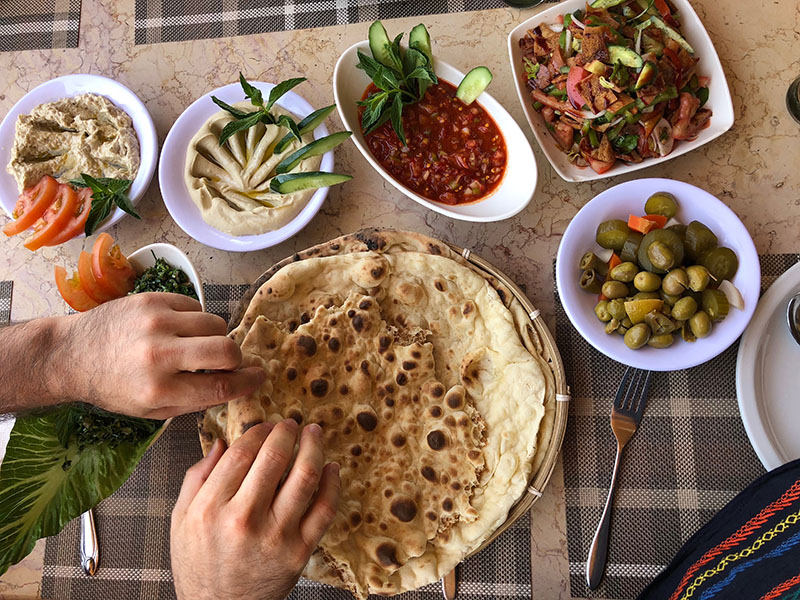 Hospitality at its heart
“Wherever you are in Jordan, there will always be discussions around food. Jordanians are renowned for their hospitality and food is at the heart of our culture,” says Awimer. Hashem is famed for its fuhl (fava-bean stew) and falafel, traditional foods that, while in Amman, we also enjoy at Sufra Restaurant in Rainbow Street and Kan Zamaan, which offers breathtaking views over the city. 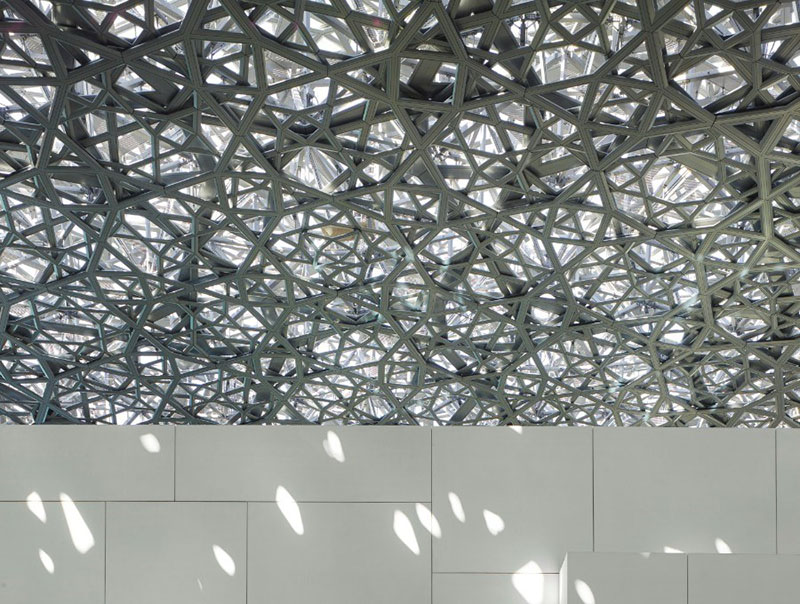 Gulf of difference
The Middle East is often described as a land of contrasts. And perhaps nowhere is that feeling – of stepping through a doorway and into another universe – better felt than when flying out of the Jordanian capital Amman and into Abu Dhabi, the capital of the United Arab Emirates.  While Jordan is full of reminders of the past and the country’s position at the crossroads of vital trade routes, here, in the futuristic mega city, buildings such as the new Louvre Abu Dhabi stand as ambitious symbols of globalisation and the UAE’s future as a space port and over-the-top wonderland. 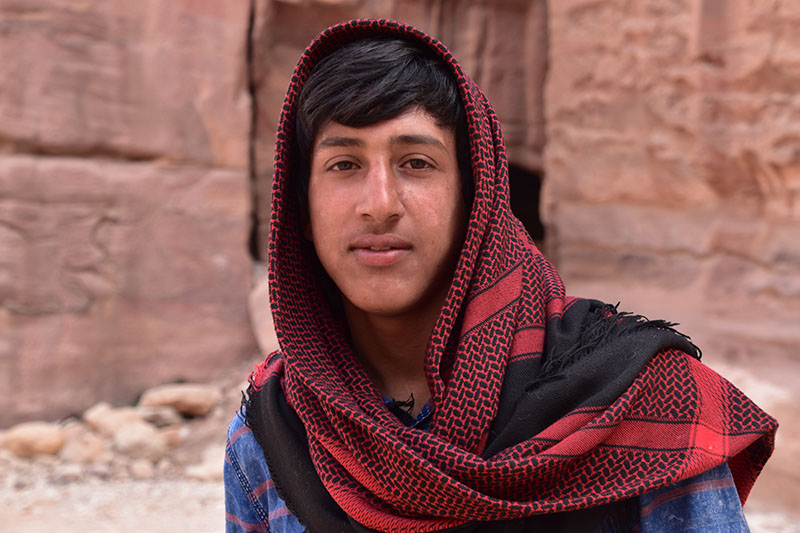 Middle East meets West
Regardless of whether you’re staying in a Bedouin-run camp in the vast Jordanian interior or dancing around a pop-up bar on a helipad on the rooftop of the St Regis Abu Dhabi, what’s clear is that when the Call to Prayer sounds via loudspeaker, the lines between the two countries in the Middle East blurs.

That gulf between ancient and uber-modern in the Middle East narrows further when, during your two-day layover in Abu Dhabi, you receive a notification that @sybljdylt – Saeb Sulaiman Mousa Al Badool, Camel driver No. 6, of Petra – is now following you on Instagram.

Getting there
Etihad Airways flies from to Jordan to and from its hub in Abu Dhabi to Perth, Brisbane, Melbourne and Sydney. etihad.com

Where to stay in Abu Dhabi
The St. Regis Abu Dhabi: stregisabudhabi.com