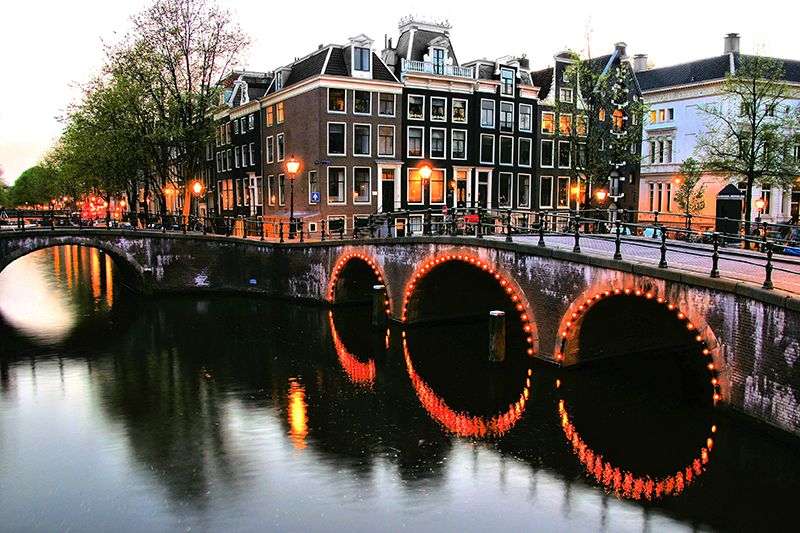 I always arrive in Amsterdam when it’s raining. Yet I could not envisage this old-world metropolis without its dark textured skies and ubiquitous waterways that tie quaint, leafy neighbourhoods to the Amstel River – a picturesque thoroughfare that holds the potent spell to the city.

Then a miracle happens on this seemingly damp morning. Short, sharp bursts of sunlight pierce through the clouds, bathing Amsterdam’s canals in a soft glow of light. And out of the blue, her gentle beauty is unveiled, like a masterpiece longing to be discovered.

The stony silence that first greets me on my walk along the Prinsengracht Canal has now been broken by a beeline of activity. Pedestrians surge forward like soldier ants; some by foot – most on bikes.

Cafés now beckon. Boats sound their horns. Ringneck parakeets screech from the trees. Even the tantalising whiff of fried batter now wafts through several homespun windows. I can only surmise that this magnificent Dutch city wants to remind me that its subtle charms should never be ignored. 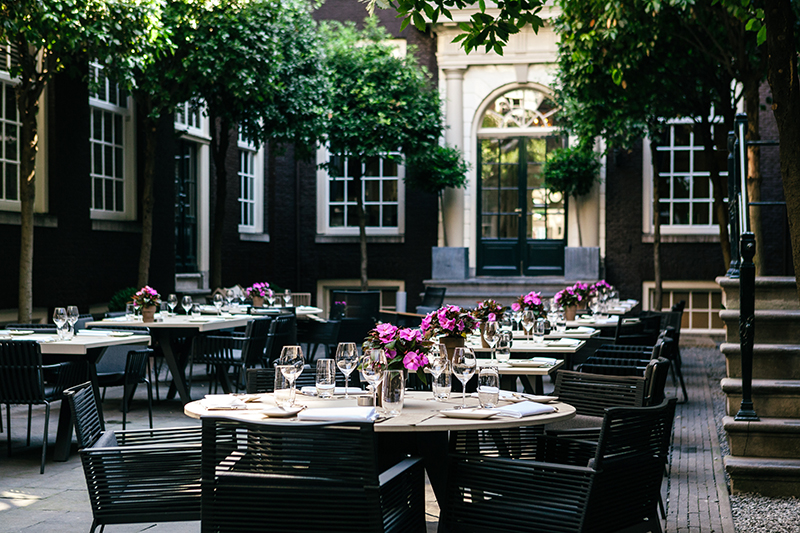 Leaving the weather to chance, I hop onto a private vessel owned by my Dutch friend, Corinne Meijer, at the curve where the Prinsengracht intersects with the Reguliersgracht; one of the city’s prettiest corridors within Amsterdam’s Canal Ring. Renowned for its seven arched bridges and elegant 17th-century gabled houses that trace its roots back to The Dutch Golden Age, the canal is also studded with

Renowned for its seven arched bridges and elegant 17th-century gabled houses that trace its roots back to The Dutch Golden Age, the canal is also studded with storied history.

“For too long guide books have focused on the seedier aspects of Amsterdam; the Red Light Districts for instance, and the notorious coffee houses. However, they do not reflect the city’s spirit or elegance,” says Corinne, a graphic designer who arrived in Amsterdam from Utrecht as a fresh-eyed student, and never left. “To really appreciate Amsterdam, you must first recognise its importance to the art world, as well as its cultural

“To really appreciate Amsterdam, you must first recognise its importance to the art world, as well as its cultural reverence to architecture and design. And when you do, your romance with the city will begin.” Add this to its culinary and avant-garde café scene, and you’ve hit upon what makes Amsterdam tick. 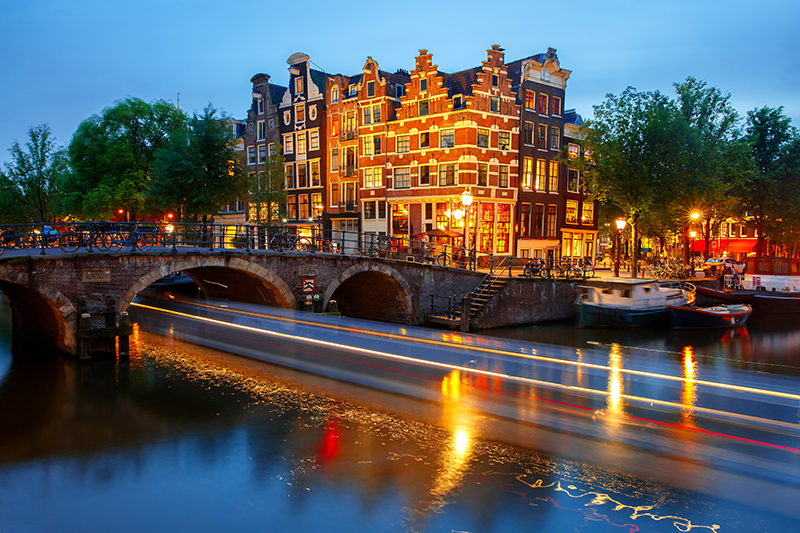 Corinne smiles at this thought. “That’s the best part of the city,” she continues, as we glide past a houseboat filled with a fusion of bright, spring flowers. “You can sit back anywhere while sampling some of Europe’s finest food, and truly breathe.”

Take this spring day for instance. We moor Corinne’s boat and cut loose at Spanjer en van Twist on the Leliegracht, where we take a ringside seat on the terrace. Unlike the other cafés that straddle the canal, this one seems edgier, where locals come to gather.

I spot a middle-aged woman at a table near the water’s edge. She has a folded copy of De Telegraaf resting beneath her iPhone. She sips her latte, then another, as she quietly immerses herself in the mid-morning swirl. Nothing special has taken place; she is just content to linger.

A pigeon suddenly lands on our table to peck at a few crumbs. With one “shoo” it quickly ascends in feathery flight. If I follow it across the canal and around the corner to Prinsengracht, I will find myself milling over tulip bulbs and pungent Gouda at the Tulip Museum and Cheese Museum, a stone’s throw from the Houseboat Museum.

As Corinne tells me, it turns out that there are many great guidebook sights to be explored. We ditch the cheese in favour of art. 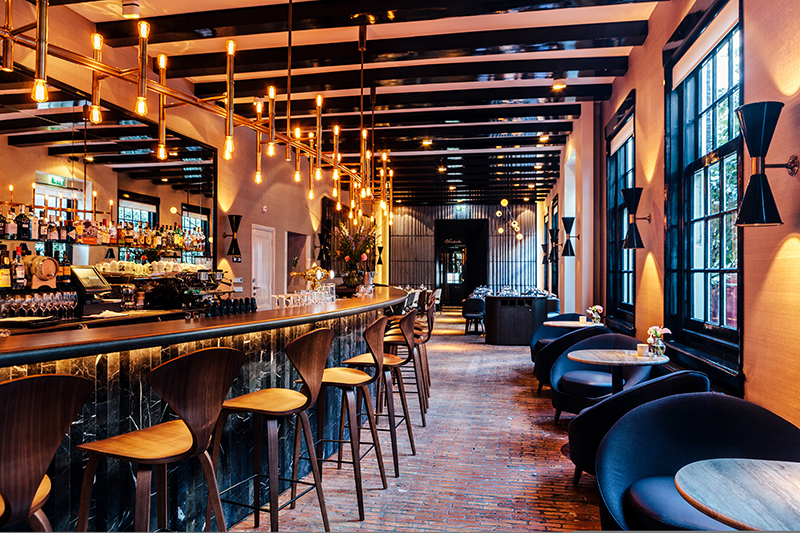 Just 15 minutes from historic Dam Square is the Museum Quarter where we head to the Rijksmuseum for a session with the Dutch Masters – most of whom flourished during the Dutch Golden Age.

To describe this bountiful period is like viewing a passing season of tulip fields in full bloom. The abundance of money saw over five million works of art being produced. Delftware ceramics were in the finest houses.

Artist Johannes Vermeer painted the sumptuous, The Milkmaid and Willem van Valckert captured the Netherlands’ progressive welfare system on his canvas, Giving the Bread. Lasting a little over a century, the Dutch Golden Age was all over by 1702.

Perhaps the most inspirational was the Baroque artist, Rembrandt van Rijn, who instantly won acclaim and commissions when he first came to the city from the university city of Leiden to paint. 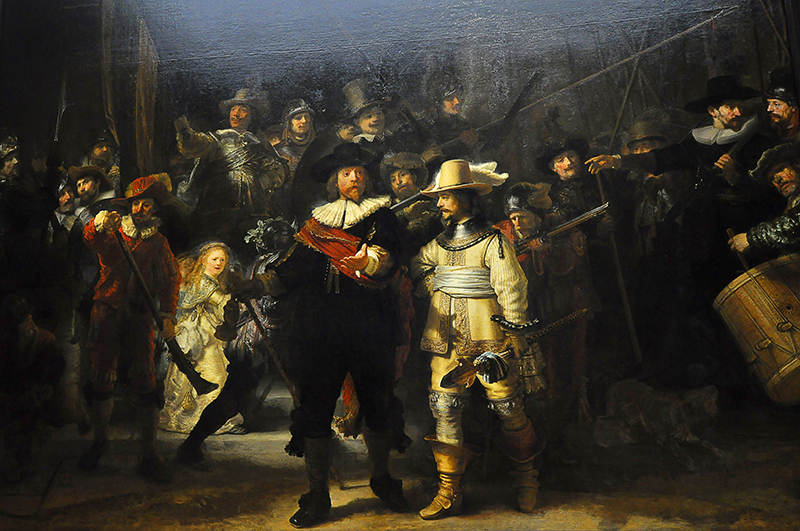 Among his great works at the Rijksmuseum, one in particular, stops me. I gaze up at his self-portrait and study his soft eyes; his youthful face contoured by filtered shadows and tones, and cascading curls etched from the tip of his brush. He too, is watching me.

“Rembrandt was a genius,” Corinne intones as she ushers me towards The Night Watch, his most famous painting. Yet if this splendid painting could talk, the civic officers featured in the background of his canvas would tell you differently.

Commissioned to capture their important standing alongside their captain in a static stance, Rembrandt redirected his virtuoso brushstrokes on storied movement through the use of light and colour; a shift that saw the militia play a less prominent role on canvas. What’s more surprising, the artist never secured an important commission again. 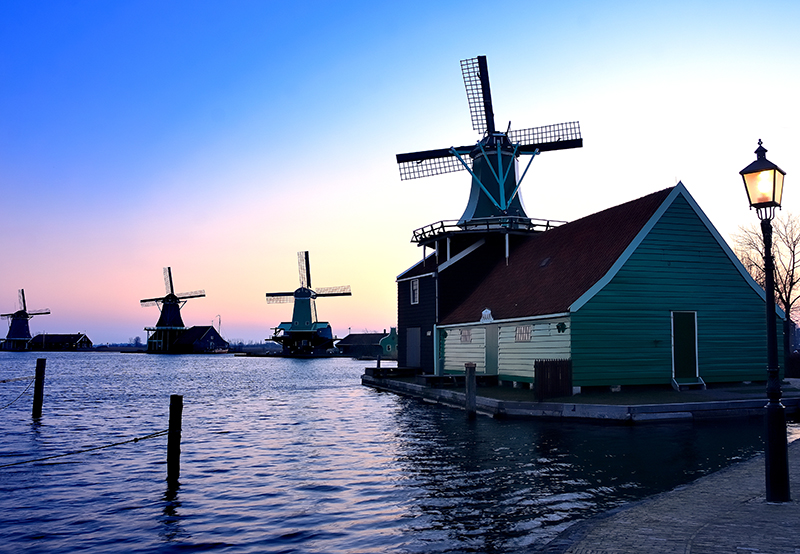 Rembrandt’s fall from grace is not lost on Corinne. “Here we are, standing here nearly 400 years later, paying homage to his life’s work,” she says as she gestures towards his body of work. “It’s like poetic justice, isn’t it?” Now, as I rub shoulders with Rembrandt’s ghost, I feel a shiver running down my spine. Even from a distance, his eyes travel the room; to observe and study the movement.

A few blocks away, we enter the Van Gogh Museum in the same way as Rijksmuseum – as part of a throng. Past a colossal glass structured wing, I make my way to view the artist’s body of work; Sunflowers, Banks of the Seine and The Bedroom – dreamy palettes representing the different places where he lived.

And under the spell of each theme, I learn of the stories that imprinted Vincent’s correlation with nature; his unrequited loves and legendary feuds. Even his intense thoughts, which are revealed in his poignant letters to his brother, Theo.

Standing next to us is a child, no more than eight-years-old. She is staring at Wheatfield with Crows, which Vincent painted in 1890. Believed to be his last painting before he died by his own hand, there is a road that is fingered by swirling stalks of golden wheat. Beyond the fields is an ominous sky where black crows fly. I wonder if it will live in her memory. 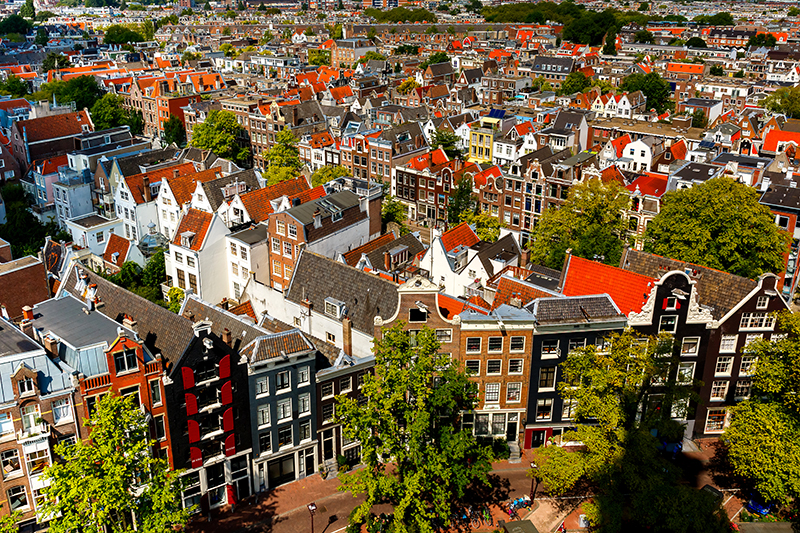 It turns out that I see Amsterdam very differently by water, the touchstone of familiarity that anchors everyday life. And the places that I keep returning to include young diarist, Anne Frank’s wartime world – one of the many thousands of Dutch-Jews who perished during the Holocaust.

Just 15 minutes away in Nieuwe Amstelstraat, I start at the Jewish Historical Museum, a former deportation centre for thousands of Jews which presents itself as Amsterdam’s historic eyes. If I had a looking glass, it would be terrifyingly easy to cross into that world; with its graphic descriptions, documents and film footage describing the horrors of the Nazi occupation.

An elderly man dressed in a dark gray suit and black felt hat files past me. An old journal is clutched in his hand; his entire body is trembling with raw emotion. The man has come to the museum on a personal odyssey.

A photo of Amsterdam’s Jews being rounded up by Nazi soldiers is visible to my right. I don’t need to ask him any questions. When he turns and faces me for a few seconds, he tells me his story through haunted eyes. 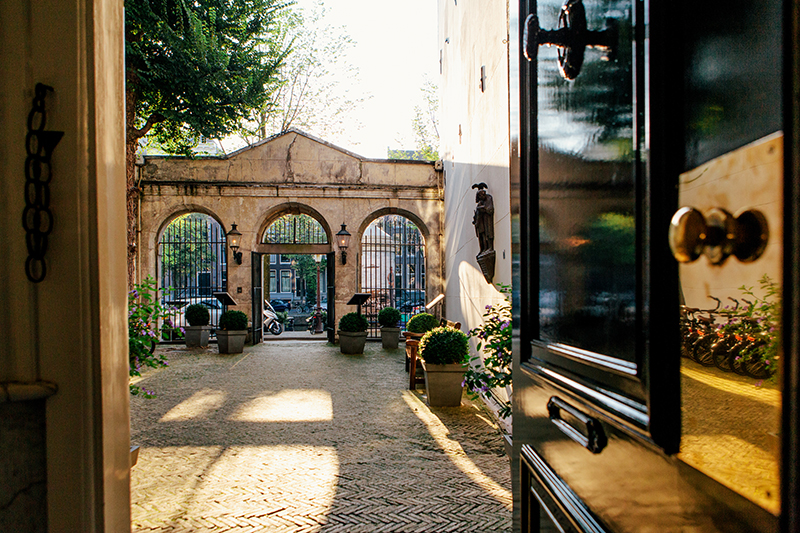 A map with a walking trail marking places of significance; buildings where the Dutch Resistance operated with the sole intent to liberate the country, also takes me to the Prinsengracht, where Anne’s father, Otto, ran his successful business.

As with all of the 17th-century houses along the canals, the Frank home was built narrow and deep, with impossibly steep stairs; a design to counter hefty taxes imposed by the width of the house. And it was here where Anne’s legendary diary gave the 300,000 Dutch Jews who perished, an everlasting voice.

Several flights up and I am standing in the Annexe Room, with its secret entrance hidden behind a revolving bookcase. For more than two years, Anne, her parents and sister lived with four other people in several narrow rooms and a compact attic; a tiny room used for supplies and a glimpse of the outside world. I take a look at the same view.

The serene chestnut trees that frame the canal. Beneath their shy spring leaves, rows of bikes are stacked neatly with chains. And on the canal, a glass-encased tour boat drifts past. Incredibly, life goes on. 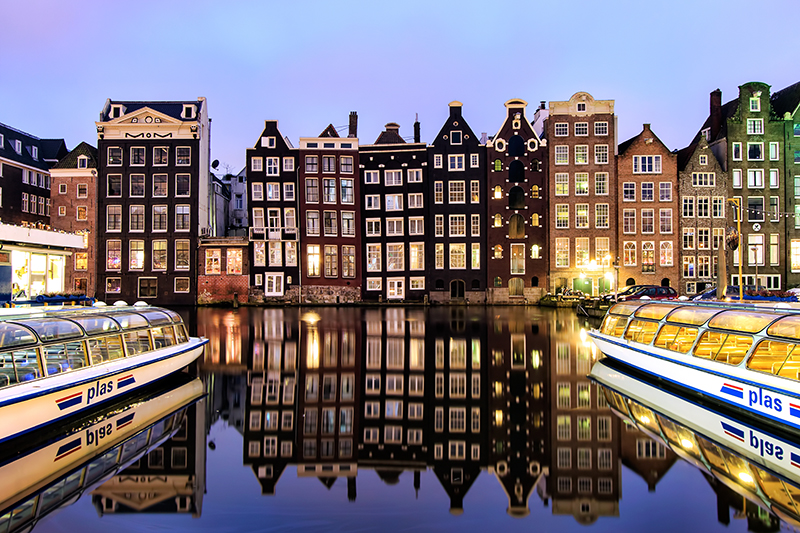 As twilight approaches, we step outside the house and into the rain. The mercury has dropped yet none of the locals seem fazed by the drizzle. Beyond the canal are the siren calls and scarlet neon of the Red Light District and the multi-cultural eateries of De Pijp, just south of the museum district. A man playing the saxophone on his boat serenades strangers. Anything goes.

The mood soon shifts as we walk from Jordaan to the elegant Nine Streets neighbourhood, a labyrinth of nine elegant streets that link to the western canals. More than anywhere else in the city, Nine Streets resists change, and I roam amid singular showstoppers – cafes, galleries and boutique stores – with an assured sense of expectation. 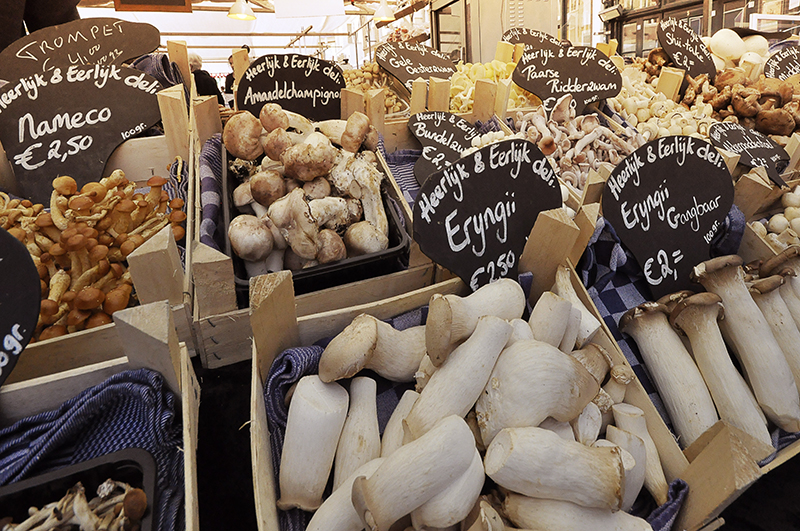 Yet Amsterdam is not known for big-scale shopping. Rather, the city is a bright spot of different vibes; places that attract visitors to experience everyday life in inventive ways.

“Every time I meet someone new to the city, they tell me how surprised they are by Amsterdam’s inherent charm,” says Michiel Reijn, an architect we strike up a conversation with at Timothy Oulton’s flagship store.

We stay for a while, and I learn snippets of Amsterdam on a human scale. “But behind the architectural facades lies a contemporary attitude, and it is revelling in a progressive beat. Amsterdam is definitely changing.”

I think about Michiel’s words as I walk a quiet block that leads me to Vinkeles on the Keizersgracht. On the way, we peer through large glass windows where chandeliers gleam and Delft crockery impresses upon beautiful dinner tables. 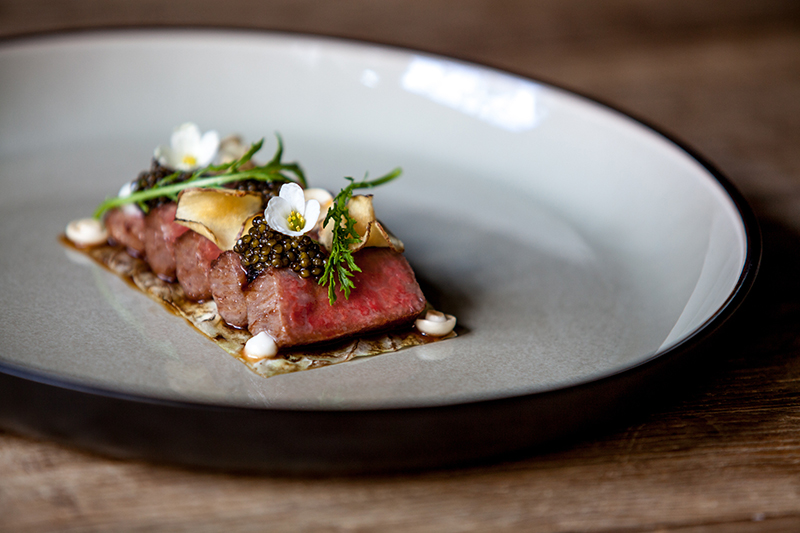 And over a dish of wild lobster, I revel in a room of soft lights and old world ambiance. It seems that in this pocket corner of Amsterdam, life has not caught up with modern sentiments.

KLM Royal Dutch Airlines flies to Amsterdam from eight Australian cities via major gateway cities in Asia in conjunction with its codeshare partners. The largest point-to-point accord in Europe and a member of the SkyTeam alliance, the Air France | KLM network also includes connections to more than 80 European cities. Passengers can choose to fly in three classes; Economy, Premium Economy and Business, and accrue frequent flyer points, lounge access and other Air France | KLM and SkyTeam membership benefits. klm.com.au; airfrance.com.au

Where to stay
The Dylan

What to do
Amsterdam Canal Tours
Eating Amsterdam Food Tours