Millennium Atoll is one of the last of the truly pristine reefs in the world, as guests on board a Lindblad Expeditions – National Geographic voyage into this remote South Pacific region discovered. 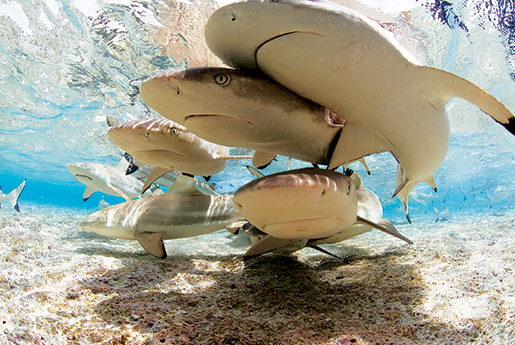 We had seen the pictures and videos, but nothing prepared us for what we were about to experience. We checked our vests and regulators, repositioned our masks, took a couple of deep breaths and launched ourselves backwards into the blue. As we turned and looked down, preparing to descend into the turquoise depths, we could see them milling below us, their sleek streamlined bodies gliding effortlessly through the water.

As I pressed the release button, a stream of violent bubbles signalled my intention. I was deliberately dropping down 20 metres below the gentle waves into a swarm of sharks. More than I could count, perhaps 30, perhaps more, were waiting for us as we invaded their realm from above.

Here on Millennium Atoll, hundreds of miles from anywhere, we are at what National Geographic researchers believe is one of the last of the truly pristine reefs anywhere on the planet. In 2009, a team of researchers led by Dr. Enric Sala, a National Geographic Explorer-in-Residence, spent more than 1000 hours below the water surveying the region, including Millennium Atoll (formerly Caroline Island) here in Kiribati to assess its viability as a ‘Pristine Seas’ location. Sala launched the Pristine Seas project to find, survey, and help protect the last wild places in the ocean.

“It is essential that we let the world know that these places exist, that they are threatened, and that they deserve to be protected,” says Sala, “We have the rare opportunity, right now, to protect many of the most pristine seas around the world.” 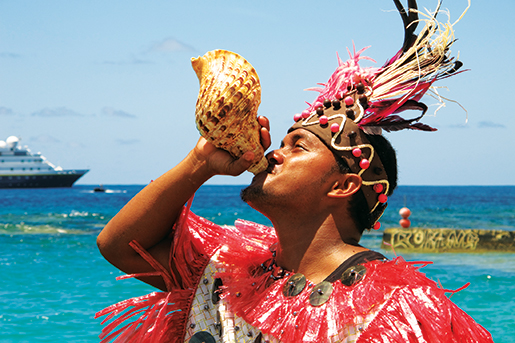 As the reef gets closer, so do the sharks, totally unafraid of our presence, they investigate us. Most common among the swarm are the svelte black-tipped reef sharks, adorned with a tricolour dorsal fin. White-tipped reef sharks can also be seen around the pack, but it’s the grey reef sharks that have caught our attention.

Bold, confident and larger than any of the other reef sharks, the greys are one of the most heavily fished species with many local populations all but eliminated due to unrestricted harvesting. They are ever-present, never leaving us alone.

“If an alien had just one day on Earth and wanted to see a coral reef, I would show him Millennium Atoll” said National Geographic Explorer-in-Residence Dr. Enric Sala.

“One of the most unusual features of Millennium Atoll and its reefs is what is called an ‘inverted trophic pyramid”, says Dave Cothran, a Lindblad Expeditions – National Geographic naturalist and expedition guide who has been vital to our understanding of the dynamics of the reef. “This means that the biomass of predator species exceeds that of the prey. It might sound like an imbalance, but it’s actually a very good sign of robust health.”

Travelling aboard the compact but lavish, 4000 ton National Geographic Orion, I am just one of more than 100 passengers on a journey of exploration and discovery from Fiji to Tahiti. Not only are we delving beneath the waves, in awe of the thriving reefs of the remote South Pacific, we go ashore to meet tribal chiefs at communities like Taveuni in Fiji and Apia in Samoa. We learn about anthropology and ecology, zoology and mythology from naturalist lecturers like 35-year Lindblad veteran Tom Ritchie who loves to tease us with tales of the great South Pacific migrations and cultures.

While many readers will be familiar with the much-lauded Orion which operated here in Australia under the stewardship of Sarina Bratton’s locally-based operation, there are changes aboard the 2003-built expedition vessel. Lectures have been moved to a modified lounge, rearranged with multiple flat screens and guaranteed seating for every passenger, with the library moved to the observation lounge in the former bar. 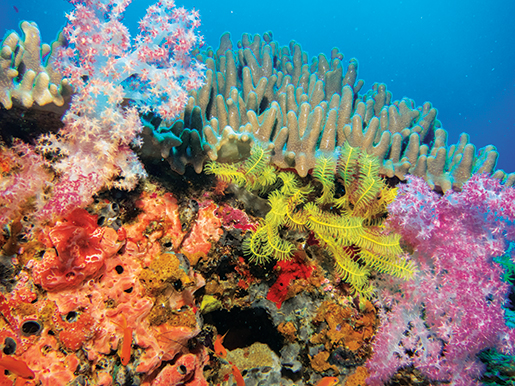 The beauty salon is gone and the top deck theatre is closed pending renovations or conversion. The excellent dining and stateroom comforts however remain.

Despite the curriculum, this is still a vacation. While ashore, we stroll among wild palms and tropical vegetation, many of us toting serious optical equipment like 300mm telephoto lenses and Swarovski binoculars. Angelic terns flutter above our heads as if to mock us, while marauding frigate birds swoop and wheel looking for any morsel they can find.

But the takeway from this immersive, transformational holiday is that our seas and oceans are not in great shape. Man plunders the seas feeding our voracious appetite for fish and marine products without fully understanding the ramifications of our actions. It’s not just whales and dolphins that need our protection. It’s every living thing in the ocean that needs each other to survive in healthy harmony. Add global warming and other environmental factors like ocean acidity, garbage, pollution and toxic waste, and it’s clear we are putting intolerable stress on our oceans.

This Lindblad Expeditions – National Geographic voyage is not some rarefied event. Beginning with the stalwart travel brand’s founding patriarch, Lars-Eric Lindblad, the company has been through several incarnations over more than half a century. But the consistent theme has always been to deliver exceptional, environmentally and culturally courageous itineraries to travellers who want more than typical brochure rack offerings.

And I use the word ‘courageous’ deliberately. During the Cold War period, Lindblad defied trade and cultural embargoes to take American guests to such foreign lands as China, Vietnam and Cambodia, a move that incurred the supreme displeasure of the US State Department.

Commenting on his rebellious nature to the New York Times after being levied with $75,000 fines in 1989 for trading with the USA’s enemies, Lindblad snr said, “I would do it again. Travel, in my opinion, is not ordinary trade. Travel is a way of communication. To embargo travel is like burning books or imprisoning journalists.”

While on holiday in his native city of Stockholm in 1994, Lars-Eric Lindblad died suddenly from a massive heart attack.

Now in the hands of the founder’s son, Sven-Olaf Lindblad and his son Jeremy, the company has never been stronger and has always been perfectly positioned to deliver benchmark expeditions to a growing section of the population who crave educational and ‘transformational’ travel experiences. Lindblad snr. was the first to offer private charters to Antarctica and built the first in the modern wave of expedition vessels, the MS Lindblad Explorer, in 1969. 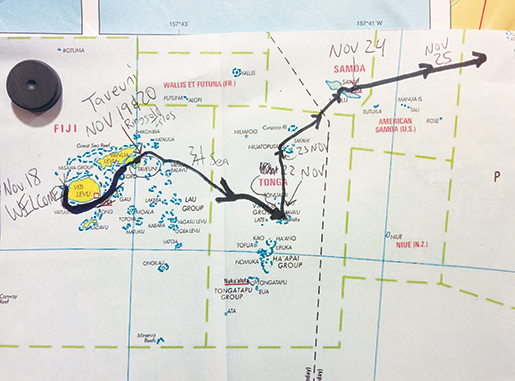 Now with either outright ownership or regular charter of a fleet of ten vessels strategically positioned around the world, thousands upon thousands of guests are enriched and informed about the state of the planet’s ecosystems, through both first-hand exposure and lectures from experts with decades of experience.

For example, aboard the National Geographic Orion on our three-week ‘Reefs, Lagoons and Volcanic Isles’ itinerary from Fiji to Tahiti, is Flip Nicklin and his wife Linda. Flip has been photographing whales and marine ecosystems for National Geographic for 30 years. It’s rare that regular travellers or even expedition cruisers meet these revered photojournalists, much less join them for dinner conversation.

It’s a policy of Lindblad to include the very best of guest presenters to supplement the roll call of illustrious expedition staff. Famous Australian filmmaker and explorer, Ben Cropp is scheduled to join the Orion for Lindblad’s Global Perspectives Speakers Program in October for the ‘Palau to Solomon Islands: Along the Pacific Equator’ expedition. This program has featured former presidents, Nobel and Pulitzer Prize winners, astronauts and other intelligent celebrities from all over the world.

Lindblad ships are also equipped to deliver enrichment experiences that the rest of the industry clamour to emulate. While the Remote Operating Vehicle (ROV) was not functioning on our journey, more’s the pity, I am advised it is now fully operational and has been wowing guests with undersea images from the Antarctic. Likewise, our ocean-going kayaks were not deployed, but elsewhere they feature as an activity when the above water attractions predominate.

From the Antarctic to the Arctic and the entire circumference of the Equator, Lindblad Expeditions are positioned to explore every inch of the planet in a way that gives incomparable insight and understanding of both the environment and the cultures encountered. Heck, why Lindblad haven’t been awarded a Nobel Prize beats me. •

*In an announcement that stunned the travel industry, Lindblad Expeditions have announced that NG Orion will reposition to Europe for the southern winter from 2016. This decision means the 2015 itineraries will be the last Pacific Ocean itineraries aboard NG Orion for the foreseeable future.