In Paris, food is not just something to eat; it is an obsession that has evolved over the centuries. 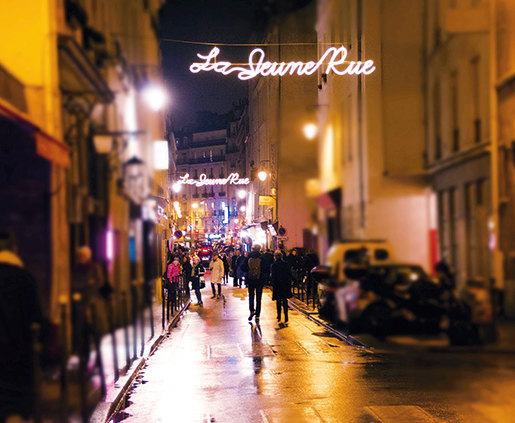 The great Roman philosopher, Cicero thought that all the sciences ultimately sought to grasp the soul. The Persian poet, Rumi thought the essence of science was to climactically find ourselves on ‘the Day of Reckoning’. But it was an 18th century Frenchman, Jean-Antelme Brillat de Savarin, the man responsible for converting gastronomy into art who said, “All the sciences have been pressed into service to enhance and set off the pleasures of taste.” That statement gave foodies an unconditional right to a rapturous existence.

The obsessions began during Brillat de Savarin’s famous Parisian dinners where he would stand beside his handsomely embroidered table, licking gravy from his teeth before reciting aphorisms from his The Physiology of Taste.

“The world,” he sensationally announced, “is nothing without life, and all that lives takes nourishment.” Then he would fall into fleshy elaborations on the operations of taste – how the cheeks, palate and nasal fossae would experience the process of degustation. As Brillat de Savarin tastefully concluded, he signalled for the finishing courses, then said: “Dessert without cheese is like a pretty woman with only one eye.”

For those of us who’ve never been to Paris, we’ve heard strange tales from possessed individuals that have – almost mythical experiences that have shaped decadent perceptions of ‘Parisian sweet life’; of exotic aromas that ripple warmly through salons, fluted champagnes euphorically bubbling by the trillions and pure smooth wines that tantalise the return to the ancient world. We’ve heard of bizarre invitations layered with etiquette and coquetry that gush with Parisian indulgences amidst baroque charms and absinthean art nouveau figures that eventually emerge, whispering seductively from the walls. 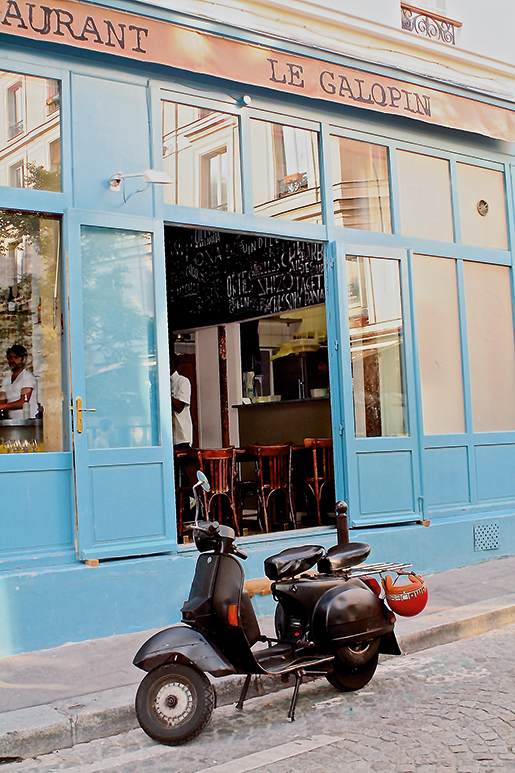 FATE ET PHILOSOPHIE
Such tales haven’t emerged from UNESCO or Michelin-starred decorations, but from live unwavering alliances: the miraculous woven between spirit and nature, the seasoned land and waters touched by harking producers, and the public’s fanatical gourmandism fed by pioneering culinary legends like Fernand Point, whose diners spanned the planet because he started every day with an empty kitchen, stressed that the soul of cooking is rooted in the market’s fresh offerings, insisted that the simplest dishes were the hardest to master, and cooked, of course, transcendentally well. These were Point’s “secrets of cooking,” no matter how loud he yelled: “Butter! Give me butter! Always butter!”

Point was exceptional, and exceptionally French – with facetious humour, hiding raw eggs in his famed picnic baskets, showing Americans out for ordering Cokes before insulting his meals. Exercising a classic, intimate connection with his ingredients, he provoked his own genius and rejuvenated the French ethos of quality consumption while refashioning the primordial union between nature and man – a union that erupts with goods in the fresh markets, is exercised devoutly in the new boutique bistros, and is ethically blazed in some of Paris’ titanic gastronomic projects, like La Jeune Rue.

Location is key. France has some 600 ‘microclimates’ of mixed weather and rich soils where herbs and vegetables, fish, livestock, game, fruits and grapevines are sourced from the Mediterranean, Atlantic, Alpine, and Channel regions, flourishing with every natural advantage, excluding the tropical.

The French themselves are wild about their gastronomy; it captures their Frenchness, like the coast to Australians, like jazz to Americans. A curious kind of gastronomic bliss extends to all levels of French society and has done since the Middle Ages. (Food was even better in common kitchens then, because tables were closer to steaming pots and sizzling pans and quality wasn’t sacrificed for glitz and glamour.) To live adjacent to the farm and enjoy the cuisine du terroir was a gift for country souls as well as urban dwellers, who used the river systems to channel their foodstuff daily from the farm to the marché to the table.

But it was the force of sensational chefs originally serving the appetites of the elite that brought French-Parisian cuisine to the world’s attention. In 1789, when the guillotine historically fell on the necks of the aristocracy, a culinary exodus of talented chefs left the mansions and opened restaurants. The French Revolution and the automobile boom later in the early 20th century allowed the lower classes the economy and mobility to experience all the sybaritic pleasures of haute gastronomie. Today, the French spend more income eating out than any other culture.

We’ll celebrate these experiences and mindful relationships—between sensations and reflection; fashion, style, and tradition; land, sea, animal and spirit—by exploring new picks in the soulful 10th Arrondissement, introducing the fascinating La Jeune Rue project, and, of course, trawling the raw markets: where the gastronomic elements are most respected and human life shapes proper form. Why should we deny such succulent experiences, in dining utopias (readied with telepathic waiters), when, in the words of critic Jean Ferniot, France is still alone in training chefs, while the rest of the world insipidly trains cooks? 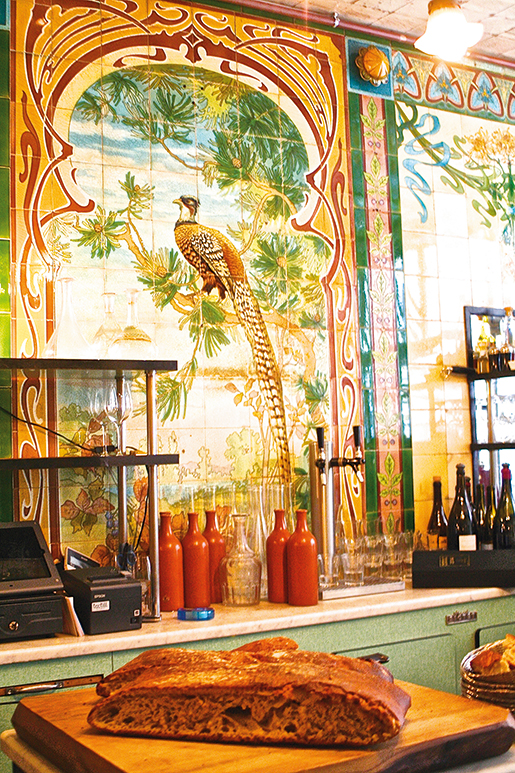 10ÈME SOUL-LIVE
Some Paris aficionados refer to the 10th Arrondissement as the new Left Bank, a welcoming humble kind of hipster flecked with an unforeseen obscurity that revives the soul. Gastronomically, the district is as good as its virtuoso chefs and its loyal following would have even amused Monsieurs Brillat de Savarin and Point.

Give thanks before forking into the opening course at Top Chef winner Romain Tischenko’s Le Galopin. Tischenko’s menu is an ensemble of ingredients vivifying with handmade organic character. The menu will say something like “Agrume, Sésame” (citrus, sesame) for first dessert, but the dish will be a bouquet of foraged flowers, fruits, herbs, spices, and creams sprightly coexisting before you. This is urban food ethics gastronomically incarnate. Romain, his brother Maxime and co. work with a network of organic producers and Mother Nature’s fabulous seasons. That means that all the fish is line-caught, all the herb-flowers are affectionately handpicked and collaged – all ingredients are local. Have a drink on the funky square pre-mealtime, but don’t insult your palate, Tischenko has six stellar tasting plates pointed your way.

Stroll along Rue Vicq d’Azir and you might hear chef, Patrice Gelbart shout elatedly about his creations at Youpi et Voilà, an atmosphere that is as cosy as your grandma’s. And like your grandma, you may not know what Patrice is always saying but he whips-up some divine plates and sets them magically before you – octopus with lentils and capers, kalamata chunks, petit slices of olive-oil-soaked sundried tomatoes with dill, sardines over Italian crackers and légumes dabbed with pistachio ice. Adding to the fare are the wines with flavours that robustly blend together and kitsch pictures, just like the living room wall at your grandma’s.

Cross Canal Saint-Martin westward into the über-cool neighbourhood and steal a look at Vivant, a gourmand experience that includes Living Table and Living Cave, an authentic haunt for French wine connoisseurs. Or head into the heart of historic Marais which spans across the 3rd and 4th Arrondissements of Paris; a neighbourhood that was drained and cropped in the Middle Ages and later snapped up by the French aristocracy who erected hôtels peticuliers (palatial palaces).

LA JEUNE RUE
Like a developing photograph, La Jeune Rue is an evolving dream. Imagine: top designers and architects from Barcelona to Tokyo bathing a lost Parisian neighborhood in their aesthetic brilliances like some neo-French Renaissance, each decorating a boutique to feature some of the best foods that farmers and artisans can offer.

Entrepreneur Cédric Naudon is sponsoring design-boom La Jeune Rue, aka Young Street, in the classy northern Marais. It’s an emblematic (and deliciously ironic) district of Paris that was drained and cropped in the Middle Ages until French aristocracy bought up the farmland and erected hôtels peticuliers (palatial palaces).

With globalisation bringing clandestine GMOs, cloned meat, and a torrent of agro-chemicals and sickness, Naudon sent scouts throughout France looking for artisans that could naturally stock his new little hamlet. Now he seeks “a new model” for the urban landscape (essentially re-establishing the farmer-buyer dialogue) while defending “every sustainable form of agriculture” threatened in our modern times.

The mission promises the development of agroforestry and permaculture, and the cutting out of middlemen that typically feed supermarkets and hypermarkets factory farmed stuff. Prices will be fair, says the press kit: “La Jeune Rue is not an elitist project.”

Nobody knows how many places will dot La Jeune Rue in the end, but so far, some 40 establishments have been conceived. You’ll float into dada-surrealist Vincent Darré’s zany ice creamery, encounter orotund classical tones and carnal paintings amongst the butcher’s slicing of gourmet flesh, feel the cool white marbled fromagerie of super-designer Eugeni Quitllet, and behold cakes on whirling displays “like jewels in a jewelry box,” by Japanese-Canadian stylist Nendo. Ingo Maurer is also designing a speakeasy next to minimalist Jasper Morrison’s tapas bar, but nobody told you that. 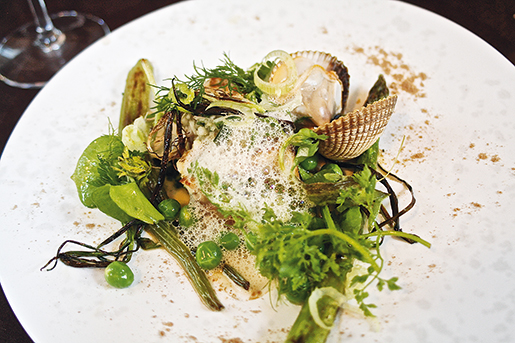 FRAIS MARCHÉS
If you need to step back into timeless life—refreshed, head to one of the many open-air marchés around town, where human energies perennially bloom and chefs forrage for daily provisions.

The biggest and most frenetic market takes place under the Barbès Rochechouart Métro station, just southeast of Montmartre on Saturdays. Here you will find artichokes, radishes, mangoes, avocados, cherries, apricots, peppers—nearly any fresh edible you can think of near a coin above or below a Euro, a kilo. The market teems with life.

Others such as Marché St-Quentin’s bustling stalls is the largest of the gourmet sort (think pâtés, fromage and cold meats) and Batignolles, an organic farmers’ market on Rue Lemercier. Here you will meet the producers and find their fruits and vegetables, fragrantly in-season and brilliantly ripened to perfection. Then with your bag of delectables crowned by lofty baguettes, head to Canal Saint-Martin near the river Seine or leafy Parc Monceau, designed by artist, Louis Carrogis Carmontelle in 1778. It’s the Euro way.

In Paris, artisan is implicitly essential and eating is the way it should be: slow and beautiful. So if, wherever you are, you find eating hurried and sapless, remember Brillat de Savarin’s emphatic appraisal: that even persons born without tongues “could still enjoy food as well as any man.” If you find that patronising, simply make your dream of Paris into a real tale that everyone at home would love to swallow. Travel back into the majestic future. Of course, “ça vaut le voyage.” •

Getting there
Air France offers over 65 weekly flights to Paris and beyond to its worldwide network in conjunction with its codeshare partners Etihad Airways, China Southern and Air Mauritius. Qantas operates daily A380 services from Australia (Sydney and Melbourne) to Dubai with daily connections to Paris with partner Emirates.
Air France; airfrance.com.au
Qantas: qantas.com.au

When to go
Hit the shoulder months: May to July and September to October, but some Parisians say winter complements the richness of their cuisine. August means vacation; many bistros, boulangeries, and cafés are closed.

Where to Stay
Inquire about one of Petite Paris’ manifold Bed & Breakfasts; they say: “Real Paris experiences start with real Paris homes.” petiteparis.com.au