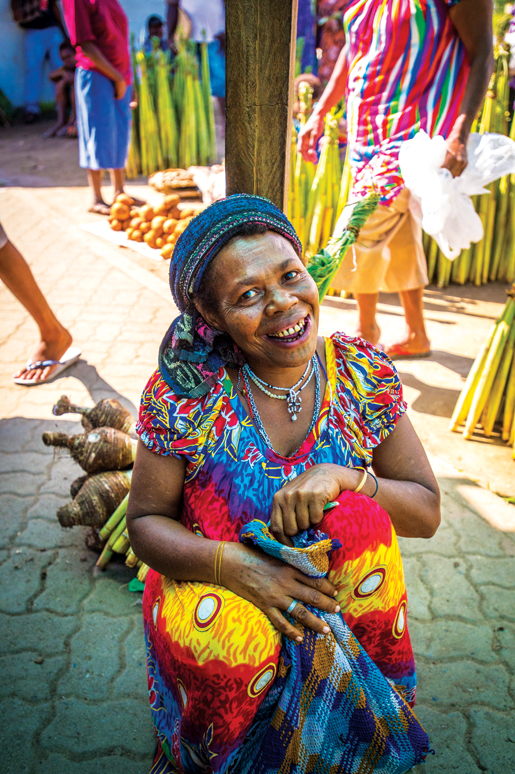 Rabaul, situated on the island of New Britain in Papua New Guinea, has experienced two World Wars and multiple eruptions of its active volcano, to not only survive, but thrive.

Rabaul Hotel owner Suzie McGrade plonks herself down in her eclectic dining room, a curious blend of tribal masks and Moët bottles, and announces to no one in particular that she hates Australians. The irony of course being that Suzie not only speaks with that unmistakable Aussie twang, but has peppered her statement with an expletive in that trademark Antipodean way that sets us apart from the rest of the world. But despite attending boarding school at Brisbane’s Clayfield College, Suzie regards herself as a third-generation Rabaul resident and a Papua New Guinea (PNG) national. And she doesn’t really hate Australians, she’s just passionate and fiery, like the volatile Tavurvur volcano, which towers over her establishment.

Suzie knows all about Madam Tavurvur, for it was this active volcano, which last erupted in 1994, burying much of Rabaul town under four metres of ash. But despite suffering some damage, the Rabaul Hotel, which Suzie’s family bought from former PNG Prime Minister Sir Julius Chan, continued trading throughout the destruction. You’ve got to be tough in these parts to survive what PNG throws at you, for there’s a price to pay for living in paradise, and Rabaul has seen it all.

But we’re not really here to talk about the volcano, as pivotal as she is in the Rabaul story, having exploded five times since 1767, but the region’s war history, and Australia’s link to the area. While many Australians know of our country’s war links with PNG through Port Moresby and the Kokoda Track, few realise that it was actually in Rabaul that the first Aussie soldier died in 1914. When the Australian Naval and Military Expeditionary Force landed on the island on 11 September 1914, it became embroiled in one of the earliest battles of World War One between the Allies and the Germans. Six Australians, one German and 30 New Guineans died, although Australia went on to occupy the island for the duration of the war.

Despite being in the middle of nowhere, and in fact, because of it, the Japanese decided PNG and Rabaul itself was the perfect place from which to stage their campaign during World War Two, considering it “the centre of the South Pacific”. It is even believed that it is from Rabaul that Japanese Commander Isoroku Yamamoto, whose bunker still sits on the island near the Niugini Club, concocted his plan to bomb Pearl Harbor. 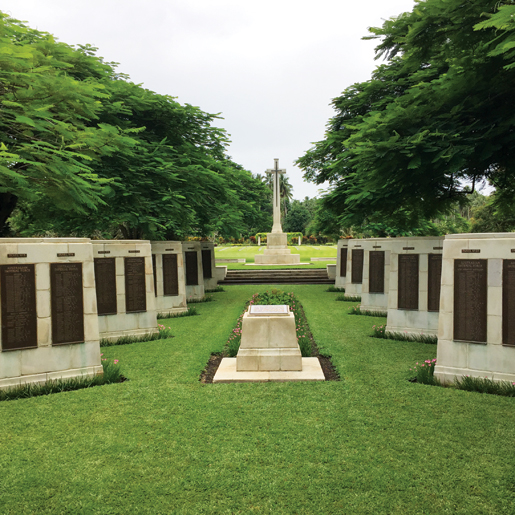 Yes, there is war history galore on this island and you don’t have to trek far to find it. Even at Suzie’s hotel, the swimming pool is built on top of an old Japanese bunker and is one of numerous relics on the island, which remain relatively undiscovered by tourists.

“If you know your history, you will know how significant it all is,” Suzie says.

“For Australia, it is very significant because Rabaul played a huge role in World War One. Many Australians just think about Kokoda but they don’t realise Rabaul is where the first Australians died in any war.”

While Rabaul is busy rebuilding 20 years after its last volcanic eruption, there’s still some war sites to visit such as the Niugini Club itself which houses much of the documented war history and is home to original relics such as a Japanese machine gun and land mine which dates back to 1933.

But the story doesn’t end there. Follow the coast road south towards Kokopo, to where many of the hotels, businesses and residents relocated after 1994, and you’ll find seven tunnels that the Japanese forced POWs from the Philippines, China, Australia, India and the Solomon Islands to build. In fact, there are believed to be around 336 tunnels scattered around the island, which were used by the Japanese to hide ammunition, food, supplies and themselves during World War Two air raids. Close to the seven tunnels, which sit right along the roadside, there is another larger tunnel, measuring 200 metres long, and in which lay the rusty remains of five barges, which the Japanese used to transport cargo supplies around the Pacific Islands.

From his office based at the Kokopo War Museum, which is a virtual graveyard of war relics and machines, local historian and tour operator Samson Kakai talks about his ‘Escape from Rabaul’ Trek. The seven- to eight-day tour has been designed to emulate the trek of 1200 members of an Australian military unit, which fled when the Japanese forces invaded in 1942, and takes tourists from Rabaul to White Bay.

“There’s more to PNG than Kokoda,” Samson says. “We see the importance of Kokoda but encourage people to come along and do the Lark Force trek too.” 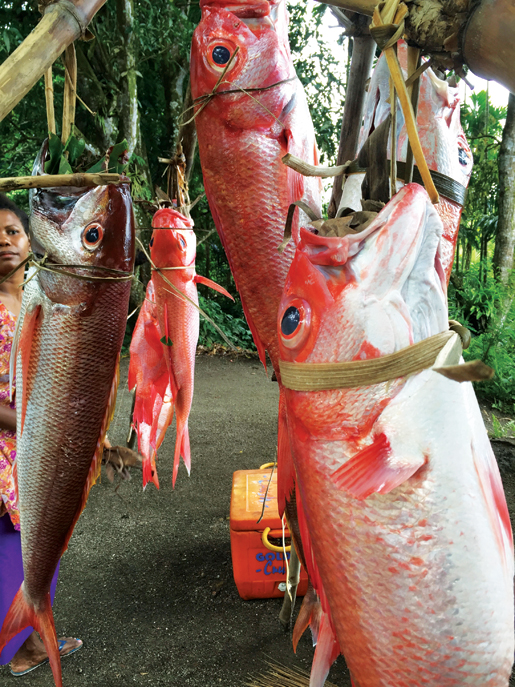 Inland from Kokopo sits one of the most accessible ways to pay homage to fallen Australian soldiers. The Bitapaka War Cemetery, funded by AusAID, commemorated its 100th anniversary last year, and is the final resting place for over 1100 buried allied soldiers and more than 1000 without gravesites. There’s even said to be a remaining tree used by the Germans to climb and shoot at the Australian soldiers.

While the Japanese have no cemeteries on the island, the bones of Japanese soldiers remain around Rabaul and Kokopo and bone collectors have been known to arrive from Japan to perform cremations on the beach in front of places such as the Kokopo Beach Bungalow Resort, before taking the ashes home.

Almost every hotel here, it seems, carries a war story, including the nearby Rapopo Plantation Resort, a former coconut plantation which became the site of a Japanese fighter airstrip. The resort is also home to Kabaira Dive, the island’s only dive operation, which offers snorkelling and dive tours to 12 ship wreck sites off of Rabaul/Kokopo. It also conducts tours out to the Duke of York Islands where the remains of a German tank sits in just under five metres of water, making it a snorkeller’s paradise. 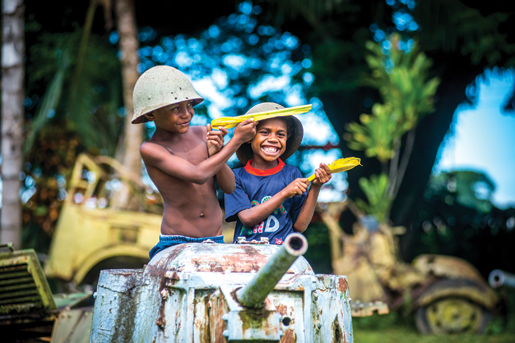 So rich in war history is Rabaul and Kokopo, that local Tolai man and historian Gideon Kakabin is currently working on an asset register of historical locations, relics, stories, arts and crafts, masks and legends for which this region is renowned. At last count, he has documented more than 3000 items.

But while it would be tempting to totally immerse yourself in the war story of Rabaul, take some time to soak up the culture of its peaceful people. For here you can visit traditional villages and experience authentic cultural life while partaking in a feast or mumu of food wrapped in banana leaves and cooked in coals. Paddle a sea kayak or an outrigger canoe and fish for tropical species like a local. Head out to the Duke of York Islands, where the missionaries first arrived in 1875, and spot pods of dolphins and flocks of flying fish. Visit the hot springs at the foot of the volcano which reach a boiling 74 degrees Celsius and are said to have reminded the Japanese soldiers of hot baths back home. Witness fire dancing, experience a mask ceremony, or attend a festival which celebrates the survival of this land.

And meet the colourful characters whose peaceful optimism ensures that Rabaul and Kokopo will survive for centuries to come. • 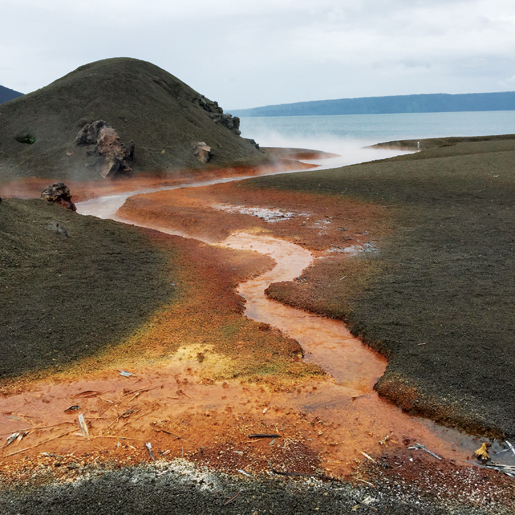 Air Niugini has direct weekly flights from Cairns to Rabaul and more regular flights from Brisbane and Sydney via Port Moresby.
airniugini.com.pg
Getting Around

PNG temperatures remain fairly hot and humid year round, however May to October are considered the most ideal as they fall outside of the monsoon and are generally cooler and drier months.

Kokopo Beach Bungalow Resort, on Blanche Bay, offers guests a taste of traditional Papua New Guinea from its timber beach bungalows, to the masks which adorn the walls and the thatched sago roof of its bar and restaurant. Boasting a conference room which caters for up to 80 people and an expansive treetop deck overlooking the ocean, there’s 39 rooms here including four self-contained suites, separate waterfront bungalows and two-storey executive bungalows. A two-room day spa bungalow offering a range of massage and beauty treatments, sits right on the beachfront here.
kbb.com.pg