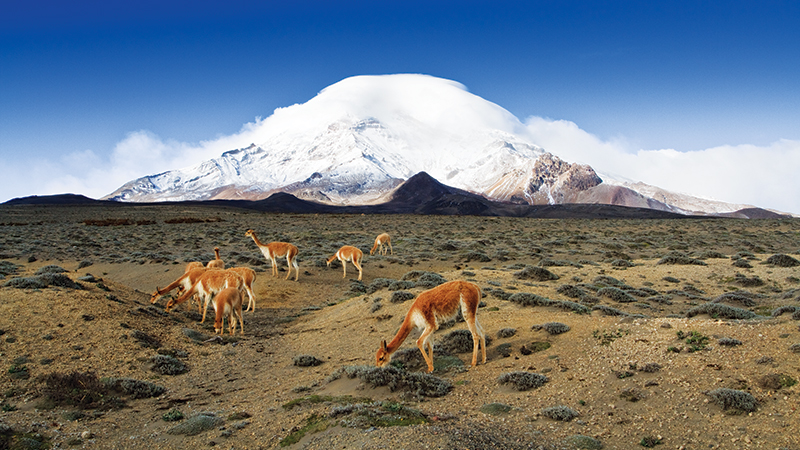 It’s a hot Thursday afternoon and I’m a gringo taking an el cheapo 25-cent bus ride in Quito, the colourful capital of Ecuador that is famous for its Panama hats and potato soup. The public bus is packed and there’s a whiff of smoke in the air. There are bushfires on the fringes of this equatorial city. More unnerving, is the sight of the smoking volcano, Cotopaxi.

It is just 45 kilometres south of town and came to life in August when it exploded and spewed grey ash into the clouds, prompting President Rafael Correa to declare a state of emergency. But the 2.2 million people of Quito, called Quitenos, don’t seem to pay much attention to such drama. Perhaps this staunch Spanish-speaking Roman Catholic population, recently visited by Pope Francis, has supreme faith that nothing bad will happen. After all, Cotopaxi hasn’t erupted violently since 1877.

The packed bus takes me to Plaza de la Independencia where, earlier in the week, I had seen the charismatic President. Every Monday, at 11am, he comes on to the balcony of his palace for the changing-of-the-guard ceremony. His men are resplendent in blue tunics, white pants and high black boots that are the envy of the plaza’s shoe shiners.

There is marching with exaggerated arm swinging, horsemanship, flag carrying and sword brandishing. The brass band plays the national anthem Salve, Oh Patria (We Salute You, Our Homeland). Quitenos raise their Panama hats and hold their hands over their hearts. It’s stirring.

If there is an epicentre of tourist activity in Quito, then it is here at the Plaza de la Independencia. The plaza is in the city’s Old Town, a UNESCO World Heritage site with wall-to-wall restored colonial buildings, cobblestoned streets and churches with neck-craning domed ceilings and precious artworks from the Baroque, Gothic and Renaissance periods.

The 15-room Plaza Grande Hotel, in a restored Spanish colonial mansion opposite the Presidential Palace, provides boutique accommodation that is as well positioned as you can get in the city.

“Where else do you have the President as your next-door neighbour?” asks Roberto Moscoso, an employee at the elegant hotel.

The Plaza Grande’s rooftop, occupied by the President’s snipers during the changing-of-the guard ceremonies, has a bird’s-eye view of the comings and goings of daily life. There are warnings of pickpockets and opportunistic crimes in Quito, but the streets below feel as safe during the day as any Latin-American city.

Well-mannered street vendors peddle Ecuadorian flags, Panama hats, crucifixes and sweet meringue sold in ice-cream cones. There are many coca products on offer, too. Some of the teas and brews, probably from neighbouring Colombia, claim to contain “marihuana”. 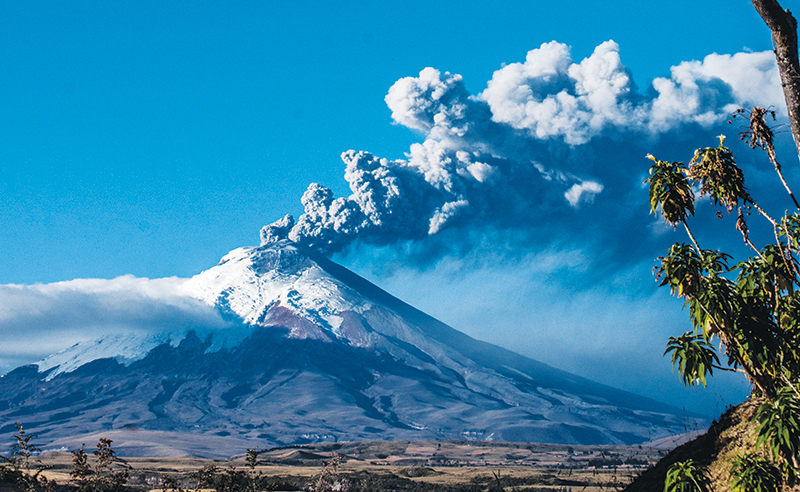 But I settle for the strait-laced coca lozenges that help keep altitude sickness at bay. At 2850 metres, Quito is the highest capital city in the world.

Already giddy with the altitude, I scale the clock tower at the nearby Basílica del Voto Nacional. Some of the city’s best views are available from this Gothic church. Getting to the views, though, is an adventure. First, you have to make your way across the roof cavity via a plank and, second, you need to climb some steep spiralling stairs.

From the top, you can see the city sprawling in all directions, over hills and into deep valleys. The 45-metre Virgen de Quito winged virgin statue is also clearly visible, as is the omnipresent Cotopaxi (one of five volcanoes that can be seen from Quito and one of 12 active volcanoes in the country).

The Basilica is stunningly ornate, and includes gargoyles depicting dolphins and iguanas in a seeming nod to the Galapagos Islands, which belong to Ecuador and lie about 1000 kilometres west in the Pacific Ocean.

Ecuador is wedged between the ocean, Colombia and Peru; it’s a diverse country with Amazonian jungle, Andean mountains and the renowned Galapagos wildlife. It is on the equator, (Ecuador means equator) and one of the main tourist activities is to visit the invisible 40,000-kilometre line that divides the Earth between the northern and southern hemispheres.

There are two tourist places to access the equator, about 30 minutes out of Quito. La Mitad del Mundo (Middle of the World) has a monument, museum, shops and restaurants. It has a painted equator line, but GPS readings indicate the real equator to be 240 metres north.

The nearby Intiñan Solar Museum, with cultural exhibits, claims that it is on the true equator and, to prove the point, guides perform some interesting experiments. One is to pour water into a sink on either side of the equator. On one side, the water drains clockwise, while on the other anti-clockwise. Hmmm. Wherever the truth lies, both attractions are worth visiting and provide a photo opportunity to get a picture of you straddling the equator with one foot in each hemisphere. 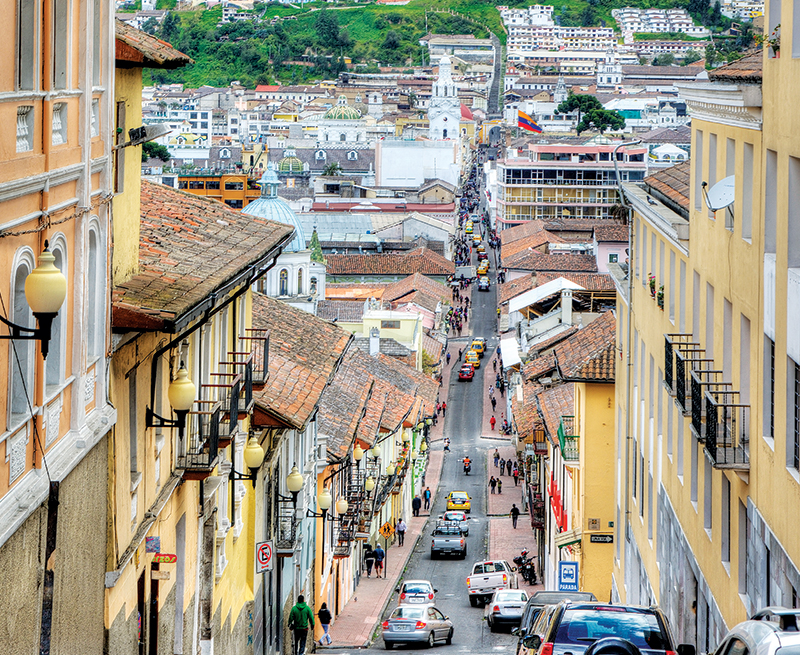 Heading further out of the city, is the market town of Otavalo where everything from food to local craft is for sale. Saturday is the best – and most crowded – day of the market and includes animals such as alpacas, llamas, guinea pigs (a national delicacy, called cuy on menus) and roosters.

The roosters are sometimes used for cockfighting at the town’s Gallera Municipal where raucous crowds gather at the pit and place bets on their prizefighters. The contests are not meant to end in death, but animal rights activists abhor the practise, saying they often do die.

There are affordable places to eat around the markets where you can sample Ecuadorian favourites such as a ceviche with a side of popcorn, potato soup with avocado and cheese, empanadas and spit-roast cuy. Don’t miss the palm grubs that look like Aussie witchetty grubs and have the texture and taste of pork crackling when grilled.

Train in the clouds

Beyond the grubs, Quito is a springboard to many other Ecuadorian adventures. One of these is the Tren Crucero heritage train that runs across the Andes on a four-day journey between Quito and the country’s largest city, Guayaquil. The President has spent $US280 million resurrecting the train, which is pulled on some sections by a restored steam engine. Along the way, there are volcanoes, mountain traverses, tropical coastal landscapes, and whistle-stops to meet locals.

We meet Baltazar Ushca, otherwise known as ‘The Last Iceman of Ecuador’. Weekly, the sprightly 71-year-old takes his donkeys on a perilous trek up Ecuador’s highest mountain, Mount Chimborazo, and cuts away ice from the glacier to sell at the market.

There was a great demand for this in the days before refrigeration, but now the ice, with health-giving properties, is used to make ice cream and fruit juice. It is available for sale for a few coins in a shed where the train stops.

One of the most jaw-dropping sections of the railway is at the Devil’s Nose, a steep section of track with switchbacks. Passengers don’t sleep on the train – which has dining cars, luxurious seating and an open-air carriage – but they bed down in various towns along the way.

The Amazon is another beacon for adventurers. From Quito, there are number of access points to the jungle. We travel by road for most of the day, via Papallacta (a village with natural hot springs that is worth an overnight stop) and the city of Tena, before boarding a motorised longboat for a short ride along the Napo River to the small Amazonian settlement of Ahuano. 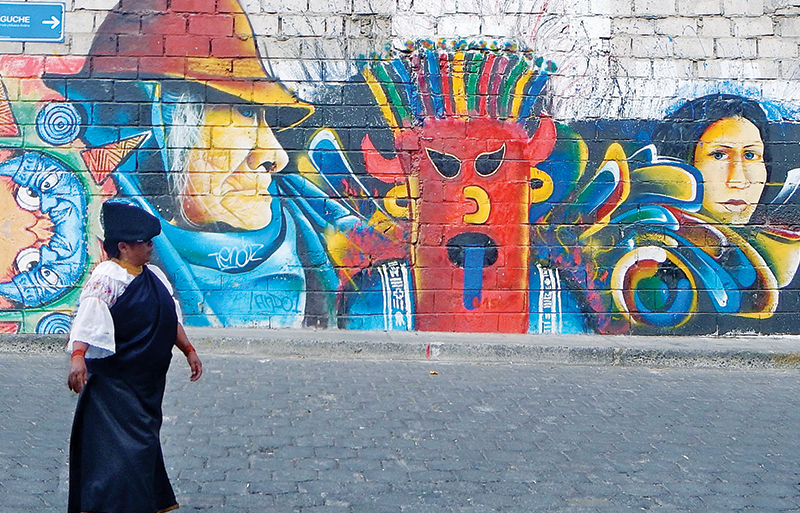 Here, the Casa del Suizo resort has a swimming pool, open-air buffet eating, and rooms with ceiling fans and private balconies with hammocks overlooking the river.

The resort will arrange for you to visit villages, to imbibe in the local fermented drink chicha, shoot a blowpipe, take a ride on a primitive-style balsa-wood raft, and trek into the jungle.

“Don’t touch anything as you walk along,” our guide warns at the start of the trek that includes swing bridges and a flying fox. “There could be tarantulas, or anything under the leaves,” he says.

We are also told of the presence of anacondas “near the water” and vampire fish that, legend states, swim up your urethra if you dare to pee while in the river.

However, the fiercest thing I come across in the Amazon is the hotel receptionist. She wants cash, but I only have American Express.

WHERE TO STAY
• The boutique-style Plaza Grande Hotel has the best position in Quito, right on the plaza in the Old Town. plazagrandequito.com
• Casa Gangotena is an elegant restored boutique hotel with antiques and fine furnishings, opposite Plaza San Francisco in the Old Town. casagangotena.com
• In the countryside, Cotopaxi Pungo is a luxurious Spanish hacienda-style hotel perched in a “safe zone” 19.9 kilometres from the smoking volcano. cotopaxipungo.com
• In the Amazon, Casa del Suizo is a rudimentary but comfortable resort-style property. casadelsuizo.com

GETTING AROUND
Quito’s public bus system costs 25 cents (to go anywhere). Change is given at bus stops; insert coins at the turnstile. If catching a taxi, insist the meter is used. The minimum fare is $US1.50 (which will take you about 10 blocks) and the maximum around town is about $US8.

TIPS
• Toilet etiquette is to put used loo paper in the bin. Most Ecuadorian toilets do not have enough pressure to flush away the paper. BYO toilet roll, as it is often not provided.
• The US dollar is the official currency. Be sure to carry small notes.
• If flying via the United States, ensure that you have an ESTA visa waiver.