Patrick Burtscher likes to joke around. As we twist our way into the Grosses Walsertal, an Austrian valley so steep and floorless it’s more of a gorge, his wife Maree explains that when they’re in Melbourne, her hometown and their main base, Australians always ask about his accent. “It’s not just my accent but my charm, my eyes,” says Patrick as he steers our mini-van up, up, up the winding road, every bend as familiar to him as the back of his hands clamped to the steering wheel. 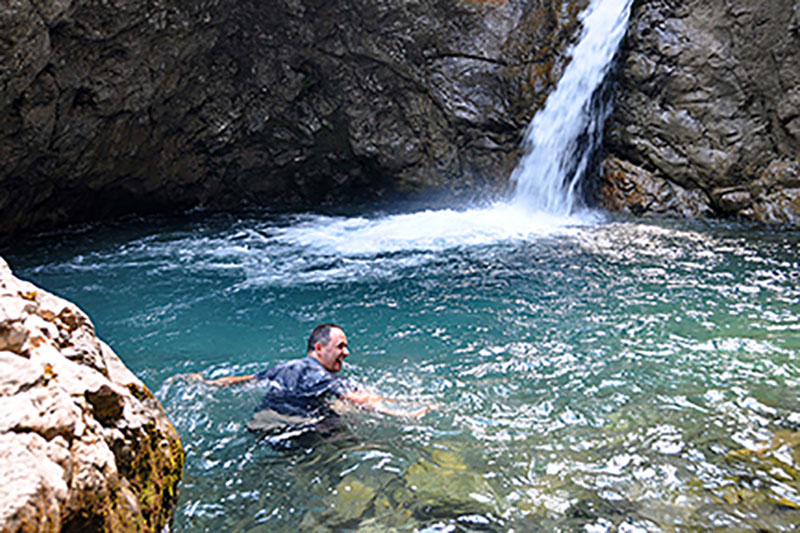 The Burtschers have been showing friends, family and acquaintances from the Nordic walking community around this fascinating valley since 2010. Their tours, packed with local insights and characters, earned such raves that they launched their own company, Austrian Alps Active, to offer summer walking tours of the valley (a winter tour starts in 2020). 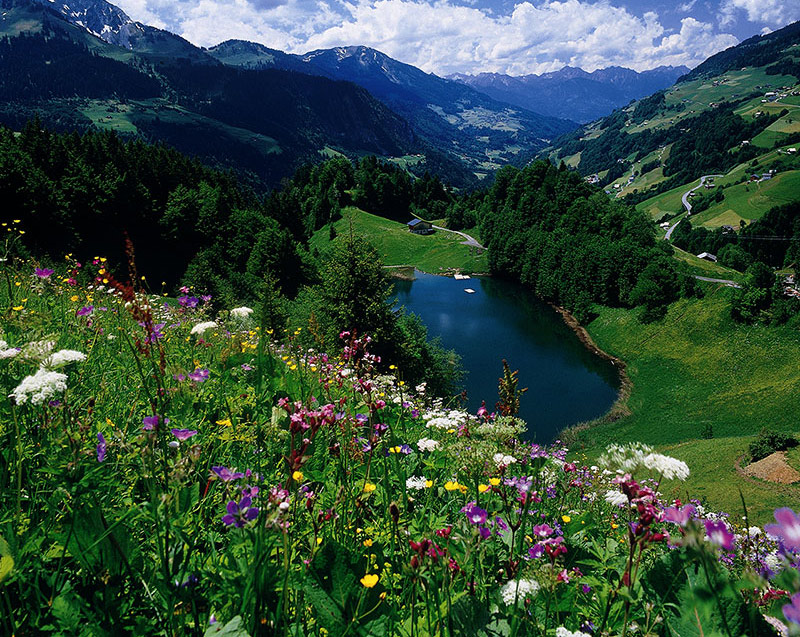 A hidden valley
In all likelihood, you’ve never heard of Grosses Walsertal in Vorarlberg, Austria’s westernmost province. This cleft in the Alps sits below Lake Constance (also called Bodensee), within cooee of Switzerland and Liechtenstein. The valley is home to the Walser people who arrived here from Switzerland in the 13th century. Somehow, they eked a living as dairy farmers from this almost vertical landscape. 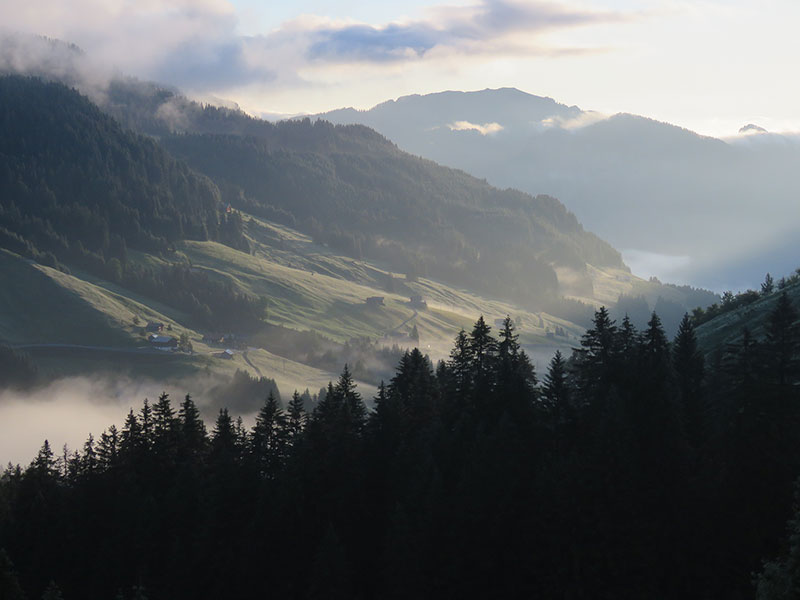 Cloud-cloaked mountains
First stop is the Alpenresort Walsertal in Faschina, a tiny ski resort perched above Patrick Burtscher’s home village of Fontanella. Some rooms at the hotel feature a view across to the Rote Wald (Red Wall) – a singular peak well known to serious climbers and hikers. Others look out upon the hotel’s resident alpacas and adjacent mountaintop kept trim by roving dairy cows that chime a symphony as they graze the meadows. 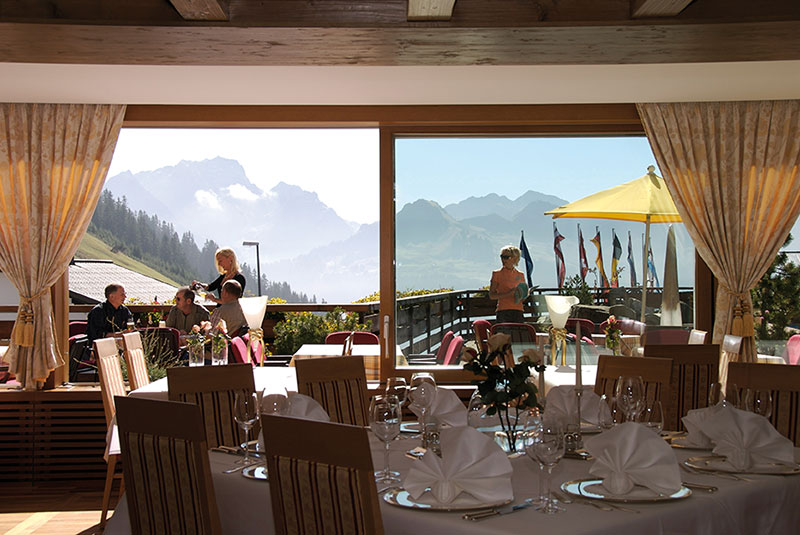 Flower power
We’re heading up there, too. Burtscher works his connections to get the cable car going out of season. It deposits us above the clouds among the alpenroses. Despite the name, these deep pink blooms aren’t roses but rhododendrons. I make like a bee, thrusting my nose into their petals. As we trot along the trail, Burtscher turns serious as he tries to express his feelings about this land. “I’m almost crying when I meet new guests because I know what they’re about to see and how they’ll feel,” he says, eyes welling as he speaks. 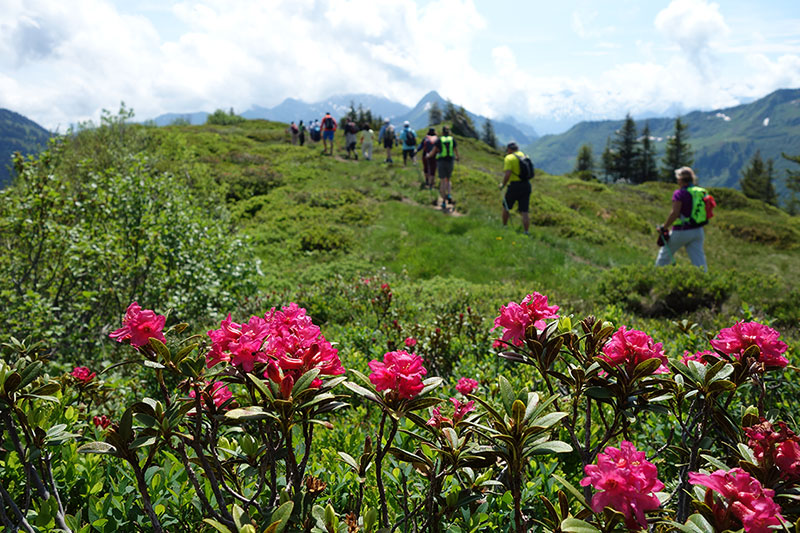 Hütte highlights
One such treasure is around the corner. As drizzle descends, we tumble into Franz Josef Hütte where owner Franz Josef Konzett (nicknamed ‘The Emperor’ in a nod to Austrian history) welcomes us with pear schnapps. We tuck into goulash soup and sausages with sauerkraut, finishing with germknödel – a fluffy yeast dumpling stuffed with plum jam, dusted with poppy seeds and sugar, and dumped in a pool of vanilla sauce. It’s so divine I could hoover down a dozen. We swivel our heads only when a stray cow clomps onto the restaurant’s sun terrace – Konzett shoos her back into the pastures. 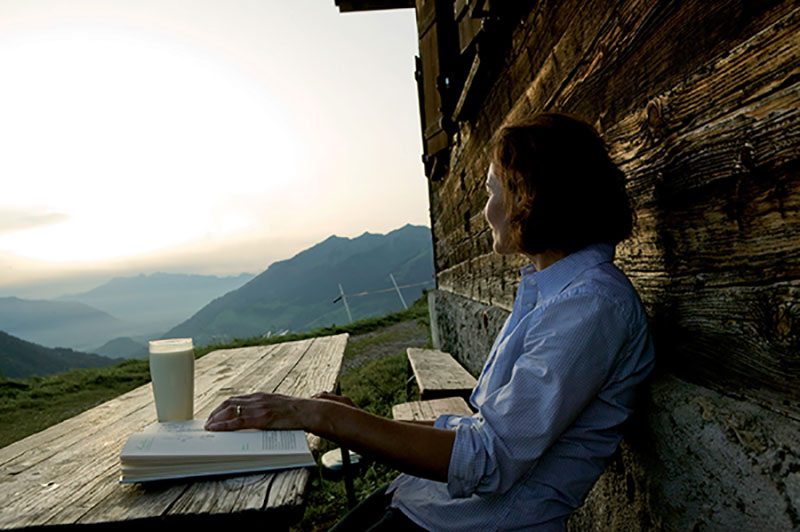 Echo point
Lunching in a hütte is the highlight of any day out walking the slopes striped with cow trails and clusters of avalanche barriers (a devastating 1954 avalanche killed 55 people in nearby Blons). There’s a German word – gemütlich – that means something like cosy conviviality, which sums up the experience of sharing a hearty meal with walking companions in a hütte. A favourite is the low-ceilinged Breithorn Hütte, nicknamed Martha’s Hut, where Burtscher is put to work grinding spaetzle dough into boiling water. Post-lunch, we hike to a soundscape trail that includes an echo wall. 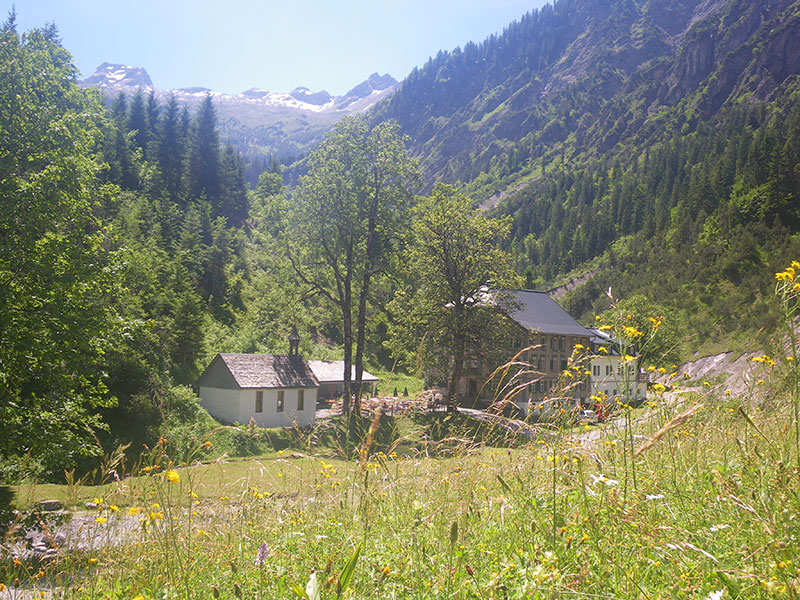 Inn keeping
Another delicious lunch spot is near Bad Rothenbrunnen – an iron-rich spring where it’s said a shepherd plunged his injured foot into the waters and was healed. Nearby, past beehives stashed in the forest is the Rothenbrunnen Inn. Sitting outside is a hunter who controls the valley’s deer numbers. I choose the same hearty meal he’s eating.

Alpine meadows and mountain tea
Grosses Walsertal is also a UNESCO Biosphere Reserve that recognises the role dairy farmers play in maintaining the mountain landscape. Farmers, who often relocate herds to higher grounds for the summer, are also landscape gardeners, crafting meadows that can sprout more than 80 species of herbs, grasses and wildflowers in a single square metre. 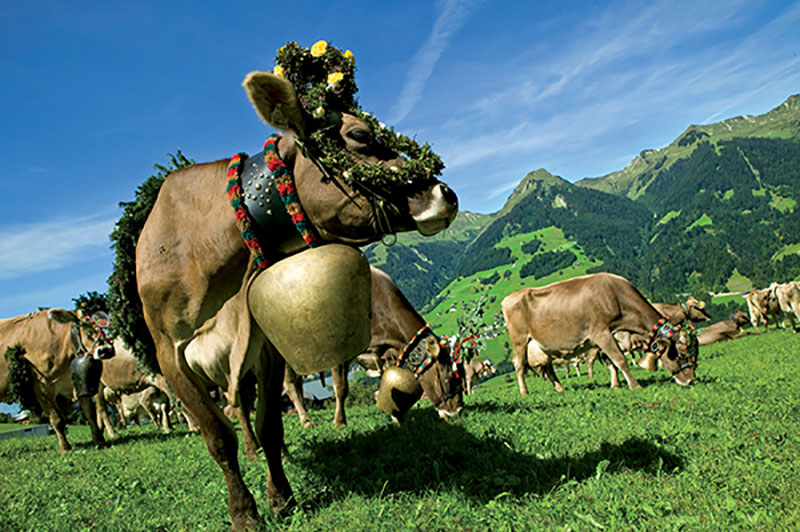 White gold
All that variety and colour isn’t only enjoyed by hikers. It creates milk so rich and creamy that everyone clamours to get their hands on mountain cheese – the valley’s ‘white gold’. We sample it at Sonntag’s Biosphere Park House – home to a museum, exhibition alpine dairy and café/deli. 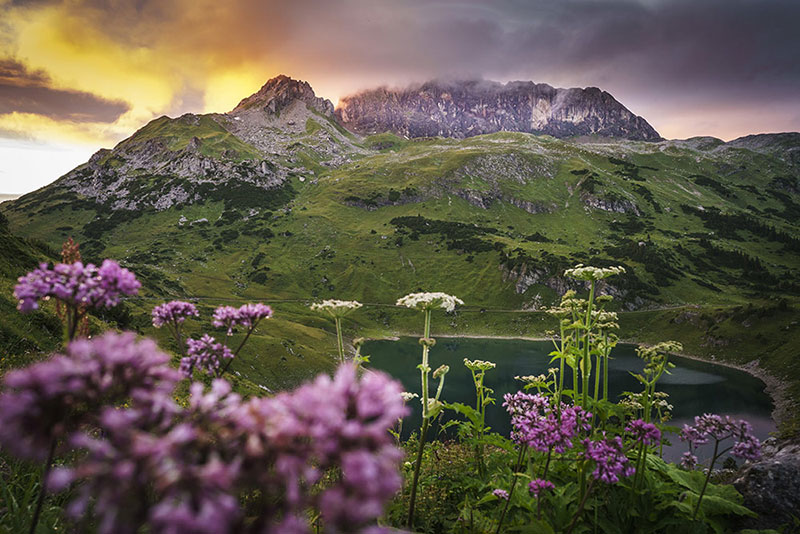 Of tea and ephiphanies
We learn more about this reverence for alpine meadows from Patrick’s mother Elisabeth Burtscher, a proud Walser woman and key figure in the Bergtee project that produces “herbal tea that has not heard a car”. She gives us each a paper bag and ingredient to gather – thyme, raspberry leaves, sage and clover – that will be brewed into a vivid green tea. Ethno-biologists have a keen interest in the project, which highlights the ‘old wisdom’ of the alley’s inhabitants. As we sip our mountain tea, an epiphany dawns. We too can make tea anywhere from the bounty nature provides.

TRAVEL FACTS
Getting There
Emirates flies from Australia to Zurich via Dubai. Austrian Alps Active’s tours start and finish in Feldkirch, a medieval Austrian city 95 minutes from Zurich by train. emirates.com; fahrplan.sbb.ch

Where To Stay
Try the three-star Hotel Bärenin Feldkirch, which is close to the train station as well as the old town.  hotel-baeren.at

Where To Eat
The atmospheric restaurant within Schattenburg castle is famous for its king-sized schnitzel;  schattenburg.cc