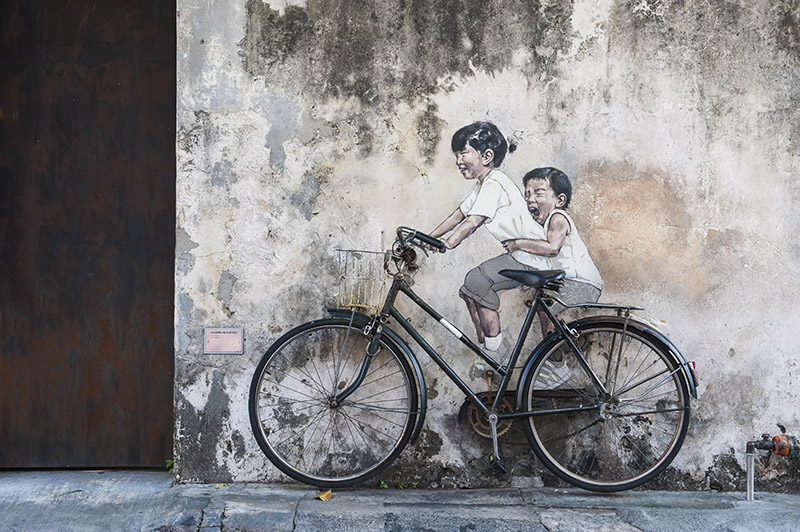 It’s said that to truly understand a culture you must taste it, and nowhere could this saying be truer than in Penang. With its rich brew of Chinese, Indian, and Malay cultures, this little island, lying off the northwest coast of the Malaysian peninsula, constantly rates as having the best street food in Asia.

On almost every street in the capital, George Town, smoke rises and aromas fill the air as hawkers concoct a variety of delicious dishes as diverse as the cultures that live here. With literally hundreds of eateries, knowing where to start can be overwhelming, so I take a food tour with a local guide to help me get acquainted with some of the town’s best.

Our first stop is breakfast at Kafe Kheng Pin, George Town’s oldest coffee shop, or ‘kopitiam’ which dates back to 1940. This old-style café with its mix of stalls, marble tables and mish-mash of wooden chairs, is famous for its delicious loh bak (five spice pork rolls wrapped in bean curd with crispy prawn fritters), cooked to perfection by the stall-owner, Lau Joo Choon, who, it’s easy to see, has refined the art of deep frying the quintessential Penang street snacks over decades. He has represented Penang at the Adelaide Food Festival, and I’m fascinated to learn that Adelaide is one of George Town’s sister cities. 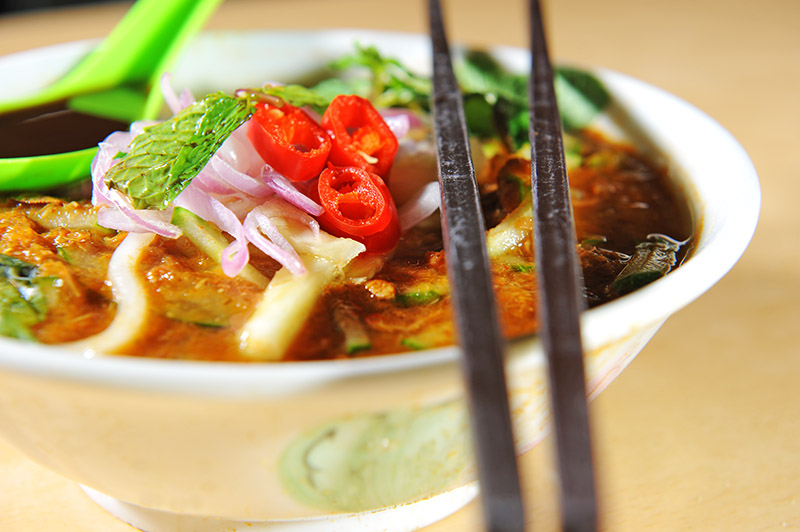 The nasi lemak (rice cooked in coconut milk with chilli paste, peanuts, and egg) here should also not be missed, served up with a range of side dishes to go with the rice and sambal, that’s slightly sweet but has a spicy edge.

We wind our way through Chowrasta Bazaar, one of the oldest markets in Penang, and where the locals go to shop. It’s filled with various kinds of seafood, traditional sweets and pickles, spices, including Penang’s famed nutmeg, and fruits and vegetables, such as the king of Malaysian fruit: durian. Upstairs there’s clothing and a bookworm’s delight of second-hand books with some very old titles.

The sights and smells of the market work up my appetite, so we head to our next stop, the Hameediyah Restaurant, which has been serving up melt-in-your-mouth traditional South Indian Muslim dishes for more than a century. Our waiter appears with tall glasses of cool lime juice with sour plum, a local favourite, followed by nasi kandar (a saporous steamed rice dish which is served with a variety of curries and side dishes) for which the restaurant is famous. We soak it up with pan-fried murtabak, a tasty bread chock-full of meat, garlic, egg and onion. 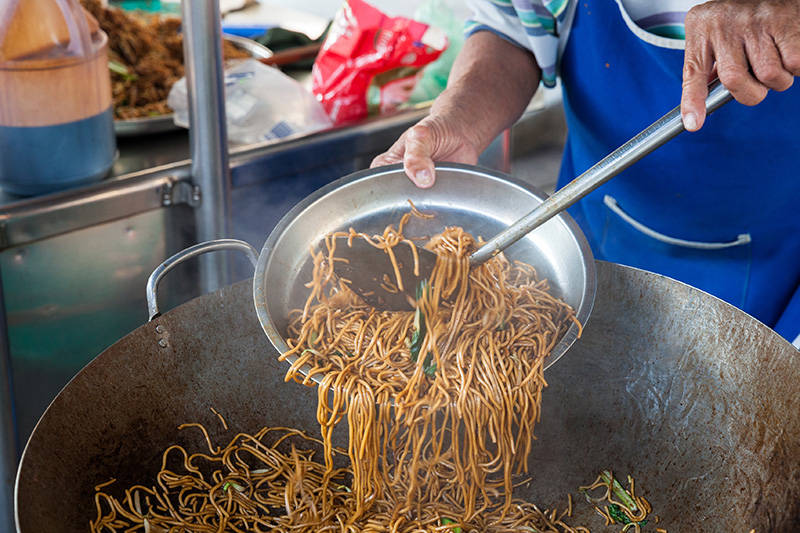 Fully sated, it’s time to walk off some of the moreish bread, and between bites, there is a multitude of non-culinary activities to savour. Before Penang was known to the world as an exotic holiday destination, she was Pulau Pinang – a barely touched paradise that got her name from the abundance of betel nut palms scattered across her soft, sandy beaches. Literally translated, Pulau Pinang means the ‘Isle of the Betel Nut’ in Malay.

The whole city of George Town, named by the British after King George III, is a UNESCO World Heritage Site, formed over more than 500 years of trading and cultural exchanges between East and West. It’s like a living museum, and the city’s multicultural heritage is evident everywhere you turn. On any day, you can simultaneously hear church bells tolling, chants emerging from a Buddhist temple, and a Muslim muezzin sounding the call to afternoon prayer.

Walking the length of the Jalan Masjid Kapitan Keling, aptly called the Street of Harmony, I pass from the austere portico and dome of St. George’s Church, the oldest Anglican church in Southeast Asia, to the smoke-wreathed Buddhist Goddess of Mercy Temple (Kong Hock Keong), and beyond to the Sri Maha Mariamman Temple, dedicated to Mariamman, a Hindu goddess of rain and fertility. Following the street to its end, I end up in the walled precincts of the Kapitan Keling Mosque. That’s four different faiths all within four blocks of each other – a prime example of Penang’s diversity and healthy respect for different beliefs. 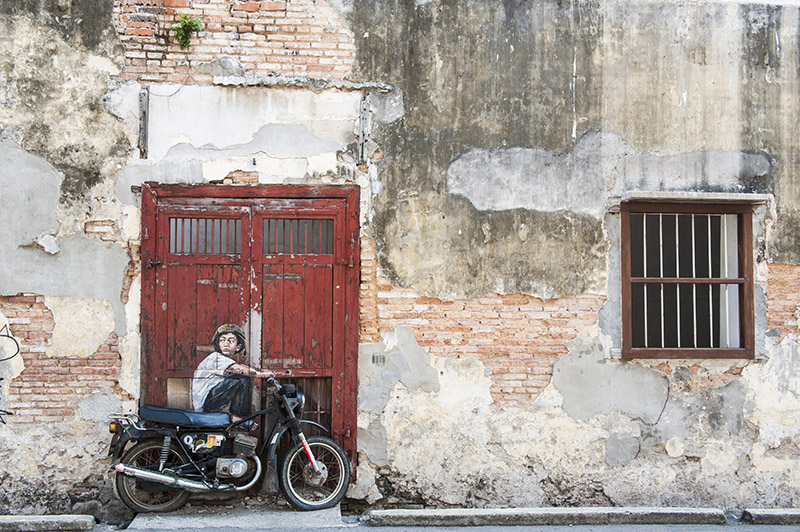 Visiting something called the ‘Temple of Supreme Bliss’ must surely be on everyone’s list. Kek Lok Si, carved into the rock face and perched atop the slopes of Air Itam, is Malaysia’s largest Buddhist temple, but as it’s around eight kilometres or a two-hour walk from downtown, I leave it for another day.

For an insight into Penang’s prosperous past, the Pinang Peranakan Mansion Museum is a perfectly preserved private mansion built in the late 1800s and filled with more than a thousand treasures portraying the lifestyle and traditions of the Peranakans, the descendants of Chinese immigrants who intermarried with the local Malay population.

The 19th-century indigo-coloured Blue Mansion built by Cheong Fatt Tze, a merchant sometimes termed the ‘Rockefeller of the East’ is also a must visit. The building is now a hotel but offers daily guided tours to non-guests for a small fee. 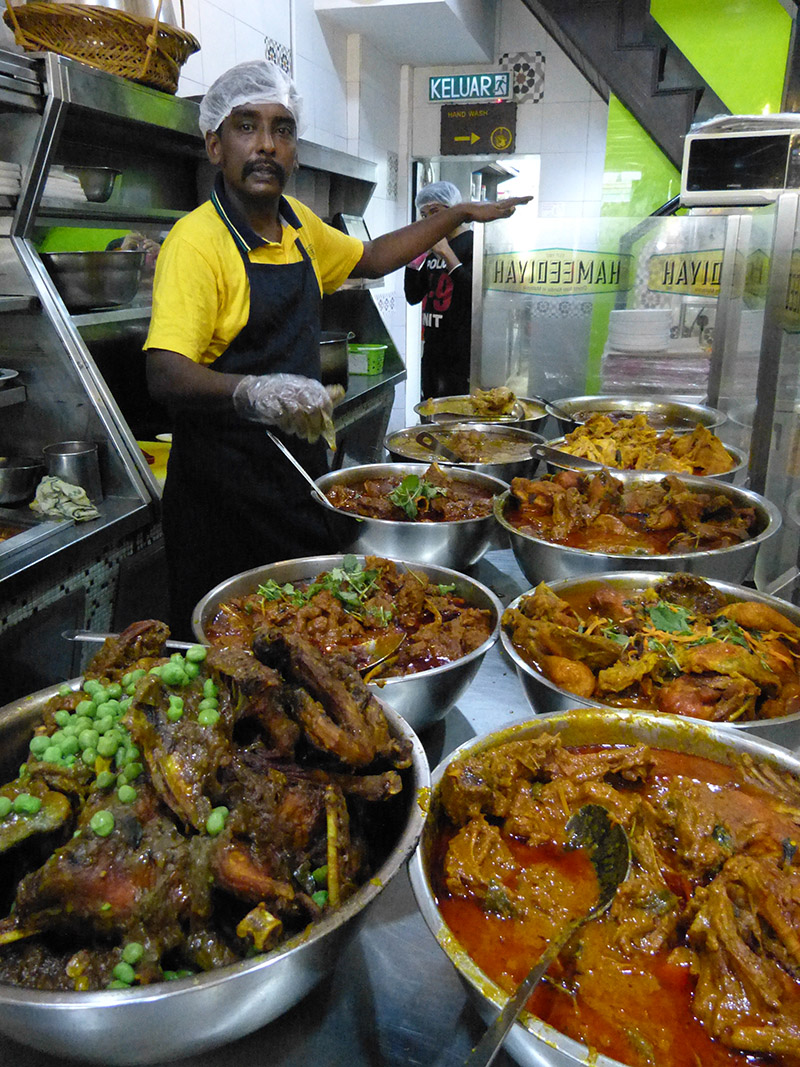 But one of the most enchanting features of George Town are the public spaces etched with murals by Lithuanian artist Ernest Zacharevic, who was commissioned in 2012 by the Penang Municipal Council to create a street art project called ‘Mirrors George Town’. Other artists followed, and the result is a visual storybook illustrating life in Penang sprinkled throughout the city.

Two of the most famous artworks by Zacharevic are Children on a Bicycle and Boy on a Bike. In both cases the bikes are real, making the artworks interactive – you can actually sit on them and become part of the art.

Others are more thought-provoking, such as one of my favourites, a giant painting of a marmalade cat called ‘Skippy’, chief mascot of the ‘101 Lost Kittens Project’, which aims to create awareness for finding homes for stray animals. Some are witty, such as the Rowan Atkinson character Mr Bean along the alley on Chulia Street.

Complementing these, more than 50 wrought-iron sculptures – each a nugget of George Town life – tell the story of Penang with a touch of humour. One of these can be seen outside the original location of the Hong Kong Shoe Store near Muntri Street, where famous shoemaker Jimmy Choo did his apprenticeship, later gracing the tootsies of celebrities such as Princess Diana, Sex in the City’s Sarah Jessica Parker and Madonna. The store is now located on Kimberley Street, where you can join a class with master shoemaker Wong Hen Mung and make your own pair of leather shoes to take home. 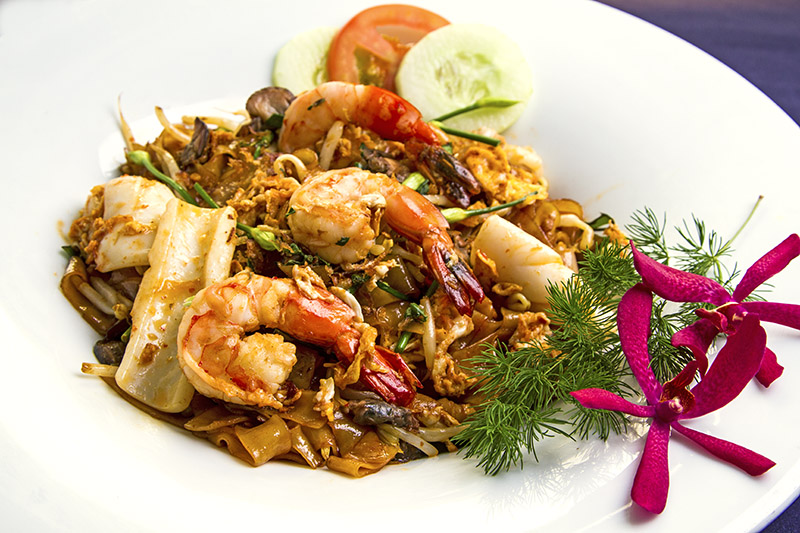 But it’s back on the food trail for one final stop, and we couldn’t say that we had truly tasted Penang without trying char koay teow (flat rice noodles with prawns, cockles, chives, and bean sprouts, stir-fried with soy, chilli and prawn paste), and Penang’s signature dish, a taste-bud tickling tangy steaming bowl of asam laksa (a sweet sour and spicy noodle soup made from fish, vegetables, tamarind, lemongrass, and chillies).

Apart from sourcing the right ingredients and using them in exactly the right amounts, the essence of char koay teow is in how it’s cooked, and devouring it as soon as it is ready. ‘Wok hei’, or the ‘breath of the wok’, is essential in creating the perfect dish. A truly great char koay teow is done by instinct and split-second timing: it’s what Penang cooking is all about, and why it’s so good.

We pull up a chair outside the humble-looking Penang Road Famous Teochew Chendul on Lebuh Keng Kwee Street and scoff drip-from-your-lips platefuls. Asam laksa has been ranked seventh of the best 100 foods in the world, and that’s my excuse for a second helping. 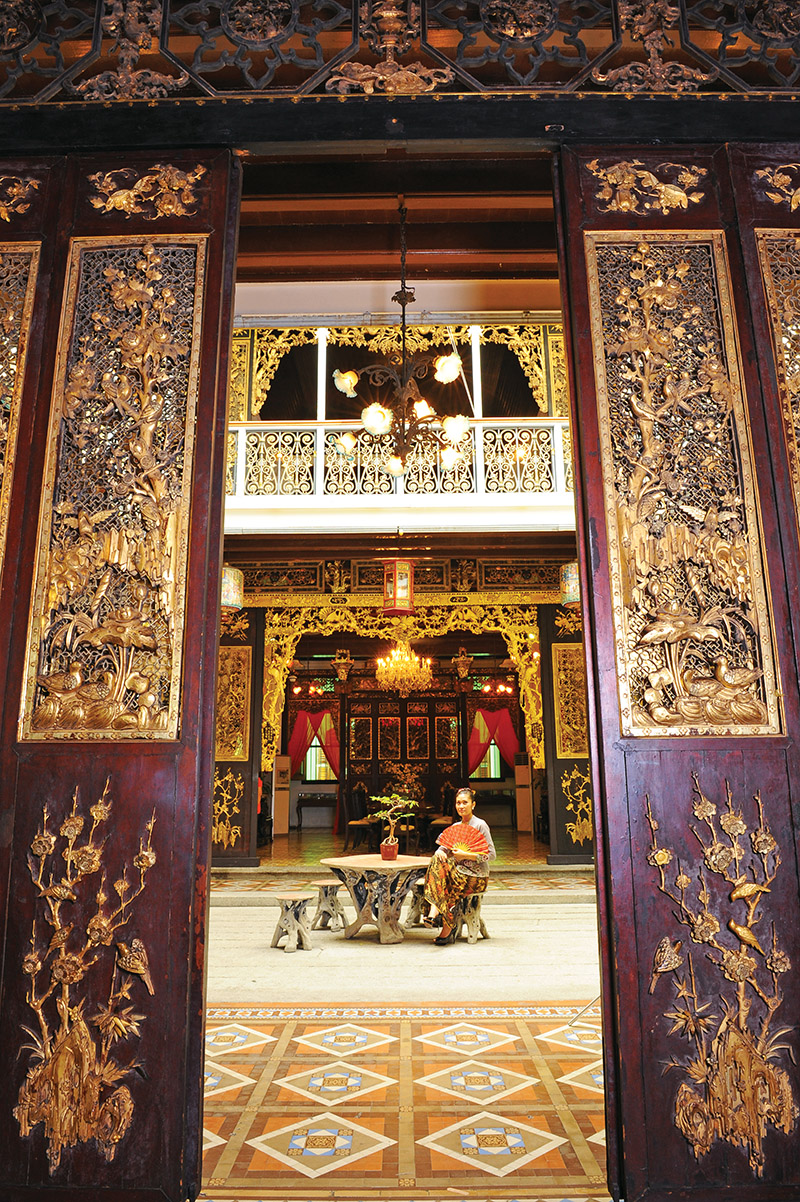 If Penang is Malaysia’s undisputed culinary capital, Gurney Drive is arguably the best of Penang on a plate. The popular seafront promenade sums up the colours and atmosphere of Penang to a tee – fun, lively and colourful. Food courts and open-air hawker stalls pepper the seaside stretch, offering gastronomic delights well into the night.

Sitting at a low pavement table in one of George Town’s narrow back streets, as trishaws and motorcycles honk and squeeze down the lane, I have time to reflect on the extraordinary diversity of this charming town, and leave with a full belly and a happy heart. • 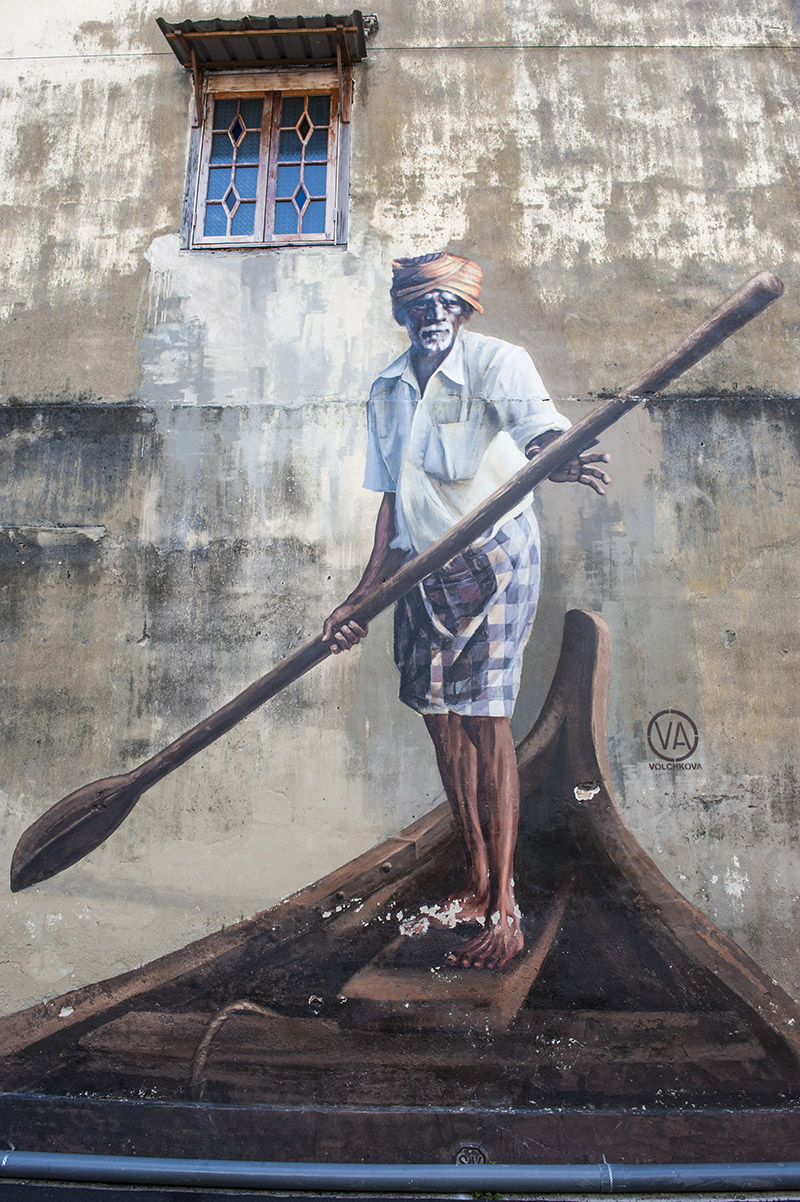 Where to stay
• Cheong Fatt Tze Blue Mansion is a slice of Penang history, housed in a Chinese mansion. cheongfatttzemansion.com
• The Eastern & Oriental Hotel is a five-star property overlooking the ocean which was founded in the 1880s during the British-Raj era. Celebrities such as Rudyard Kipling and Somerset Maugham have stayed here. eohotels.com
• Four Points by Sheraton Penang is a beachfront resort 15 minutes from George Town, with all the facilities you’d expect from an international-class hotel. fourpointspenang.com

When to go
November to January is the peak season in Penang as the weather is pleasant and conducive for sightseeing. August to October is the monsoon season with frequent showers, however the temperature is still warm.

Getting around
Penang is an easily walkable town, but traditional trishaws are a fun way to get around. Make sure to agree on a price with the driver first. Urban Adventures offers a three-hour ‘Tastes and Traditions in Penang’ food tour of George Town. urbanadventures.com