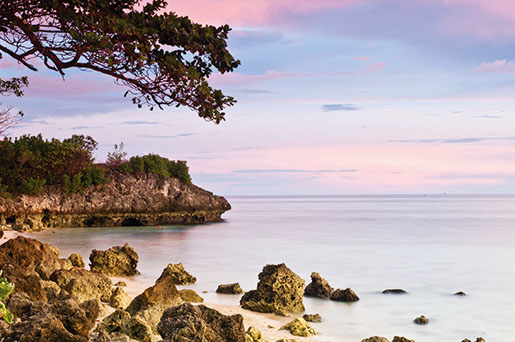 In an archipelago known for its picture-perfect islands, Malapascua stands out as offering the complete package: white-sand beaches, azure water, palm trees – and an element of surprise.
The morning sun had yet to break over the horizon; the sky was a torrent of purple and orange and the western beaches of Malapascua Island were bathed in soft light. Towering palm trees clung to the edge of volcanic outcrops, roots dangling in the waves below. Fish danced across the surface of the sea, chasing their breakfast from cove to cove. I walked along the beach and stopped to watch the slowly lapping waves reclaim the space between the sand and the sea where my feet had made a soft impression. As the sun pulled back the cover on the night to reveal a new day, I knew I had found a perfect vision of paradise.
Everything changed when I found the skull.
Bobbing in the surf, nestled between two blackened boulders, the unmistakable visage of a bleached skull stared at me and I stared back. I thought it must be a monkey, or a canine or some unknown inhabitant of this mystical island. As I waded out into the water for a closer look, the identity became unmistakable – this was a human skull, perfect in proportion and obvious in distinction. While I pondered what I should do next an old woman carrying a heavy load of banana leaves came out of the jungle and asked me what I had found. I explained to her the circumstances of my discovery; she told me that by finding the skull and returning it to its proper resting place, I was sure to be blessed with good luck for the duration of my stay on the island.
The skull had come from an open tomb in the small seaside cemetery; the old lady, whose name was Edita, speculated that a wave had crashed ashore the night before and taken the skull and other old bones on a voyage out to sea. She told me of the bantay tubig, mischievous merfolk, who steal old bones from the graveyard and refuse to give them back until the poor souls dedicate their eternities to the sea. “Sometimes the souls escape,” Edita said, “and the bones wash ashore. All they want is peace and quiet.” Together Edita and I returned the skull to a small open grave between two whitewashed tombs. She lit a candle in honour of the old bones and then, with a wink and a smile, she wished me well, welcoming me to the island she’d called home for more than 90 years. 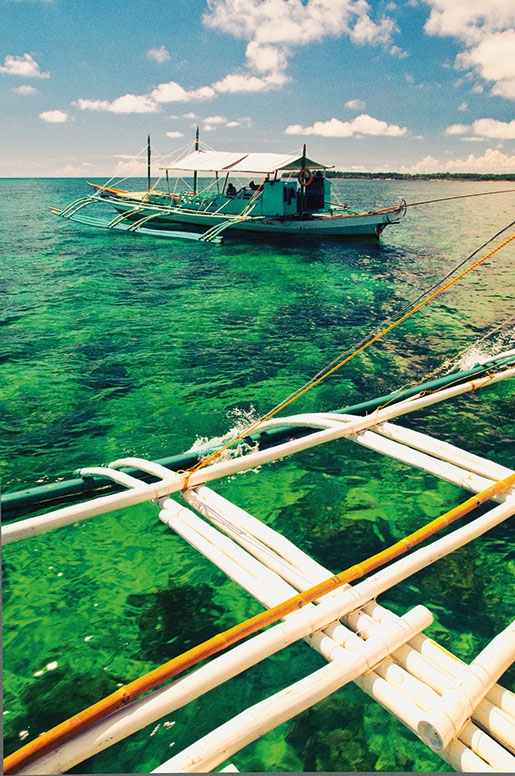 PIRATE SHIPS AND MANGOES
Friends had been telling me for years that I must visit the Philippines, that on the merits of beauty alone the islands are unmatched, with restive and restorative powers unparalleled. I had intended to spend an inordinate amount of time lazing on the beach, reading a book, writing stories and chasing Red Horse Beer with shots of rum. I thought I might have to deal with sunburn or a sand crabs in my swim trunks, but certainly not the spirit of a headless fisherman. What Edita may or may not have foretold held little consequence for me, as I felt as though I had awakened some dreaded island spirit and the ancient eyes of the siyokoy were upon me.
“Siyokoy are the male bantay tubig, the naughty ones, and they used to sink pirate ships,” Edita told me. “They did it for the gold and for the swords because they like shiny things. If a siyokoy ever offers to show you his pirate sword, you had better say no.”
A weighty presence fell upon my shoulders like a dark cloak as I ventured deeper into the island’s interior toward the village of Logon, Malapascua’s only settlement of substantial size, a place where coconut palms and thick bramble block out the sun and a long forgotten rural world is reality. The notorious reputation of this nation weighed heavily on my mind as I followed a dirt path past thatched bamboo huts, tin-roofed workshops and open-air slaughterhouses; it seemed as though everyone carried a sharp knife or a weapon built to bludgeon. Even the children were armed; one pantless boy ran past me with a sharp stick, chased by another swinging a knife.
A young man minding a fruit cart called out to me, waving an exceptionally large knife in my direction. He asked me if I liked mangoes; I considered my options and swore that I did, and the young man hacked at fruit held firmly in his palm. He didn’t lose any fingers and he didn’t take any of mine, so I accepted a slice when he offered it to me. He asked me where I was from, what I thought of the Philippines and whether or not I’d like to stay and help him run his business. “The pay is very bad,” he said, juice running down the side of his mouth. “But the fruit is very good.”
I explored the rest of Logon with my faith in the Filipino condition reinvigorated. One Logon family asked me to join them for a meal; another to rub the belly of their lucky black pig; one man asked me if I would do him the honour of beheading his prized chicken in preparation for a mighty feast. I respectfully declined this last invitation, having seen one too many severed heads for a single day. Instead I bought a bottle of rum from a sideways-leaning bamboo shop stocked with American products and shared it with a few village elders – men who remembered the island before it was touched by tourism. 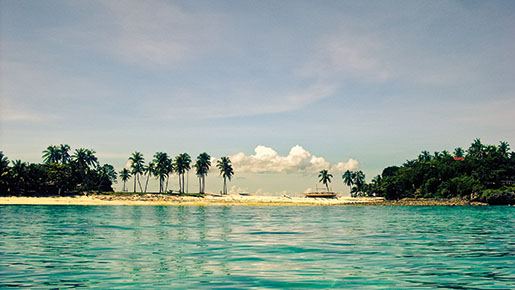 THE MALAPASCUA TITAN
Filipinos like to wax lyrical on the subject of the siyokoy and the sirenas (their female counterparts), and I found myself treated to numerous tales of deep-sea tomfoolery. In spite of a fear of all things oceanic, I decided I would do some snorkelling. I fastened a pair of cheap goggles to my face and packed my ears full of gauze as a defence against the amorous eyes and spellbinding song of the sirenas, and slipped into the deep blue sea not far from the island in a local diving hotspot, where I quickly discovered more old bones.
Scattered on the sea floor are the steel skeletons of Japanese WWII fighter planes, harbingers of death that now play host to immense coral gardens and a vast array of sea life. I spent an hour swimming through the wreckage, chasing baby barracudas and dodging tiny dorsal fins when suddenly the sun above disappeared. The light was extinguished by a black apparition; naturally I thought the siyokoy had come in search of pirate booty. As my eyes adjusted to the dark I realized that this was no spectral beast, but rather a flesh and bone Malapascua Titan, a creature otherwise known as the thresher shark. I screamed and swallowed half the sea.
By virtue of its shark-ness the thresher is a terrifying fish; mostly harmless to humans, it cuts an intimidating silhouette with its disproportionately enormous blade-like tailfin and striking resemblance to its evil Great White cousin. Ruperto, my boatman, assured me that it was safe to swim with the thresher and that I was lucky for spotting one so far from the Monad Shoal, a rocky stump where threshers, rays and other sharks congregate in the pre-dawn hours.
Malapascua has become one of Asia’s premiere scuba destinations on the strength of pristine coral gardens, high visibility and the opportunity for divers to swim with a wide variety of primeval beasts, and here was my opportunity to experience the best of the ocean. I flippered with the shark until it decided I would not make a decent meal and swam off into the sea. Ruperto hauled me aboard his boat and we returned to shore with the sun setting over our shoulders. “You are always safe around the thresher,” Ruperto said. “But you need to watch your toes when you see the hammerhead.” 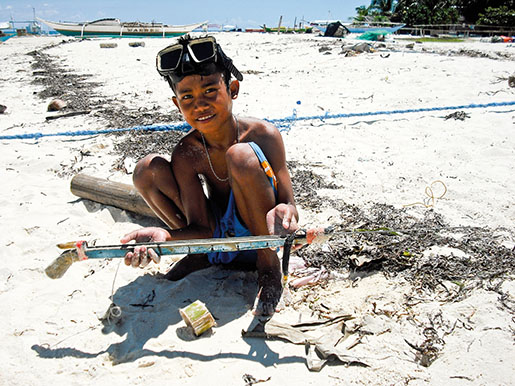 BIRDS OF A FEATHER
Legends soar on currents in the rarefied air above Malapascua. On the island’s eastern shore, on a sandy plateau where the waves break and the water turns smooth, there exist ancient totems of wood, some bamboo and some banyan, slender poles erected in the sand to hold coconut bird’s nests high above the water. Exploring the island’s atmospheric interior, swimming with sharks and lounging on the beach are all great reasons to visit Malapascua, but as I stood in waist-deep water watching the birds fly I fell in love with travel all over again.
In a testament to the island’s narrative legacy I was treated to three different stories related to the existence of the nests. A squid fisherman told me that the birds had grown tired of living in the dark island interior and had moved their nests out into the sea so they could watch the sun set. A group of gregarious children told me that their fathers had trained the birds to fish for them so that the men could focus on more important work, and the birds did such a good job that no one on the island would ever go hungry. One old man told me that the birds patrol the seas at night, ready to ward off the siyokoy should they come ashore looking for bones and souls to drag into the ocean.
I never did meet Edita again, and I never had the chance to ask her about the birds. Time has a habit of slipping away before it’s gone, and before I realised it my time on the island had come to an end. A tropical utopia that sits a few kilometres off Cebu’s northern tip in the municipality of Daanbantayan – one of the Philippines’ most densely populated and frequently visited islands – Malapascua is unlike any other place on earth. It embodies the best of the Philippines with sand, surf, sun, scuba and snorkelling in abundance, but above all else is an ephemeral paradise, a place where myth and magic have mixed to create experiences that are as enchanting as they are enlivening. •
Photography by Flash Parker. 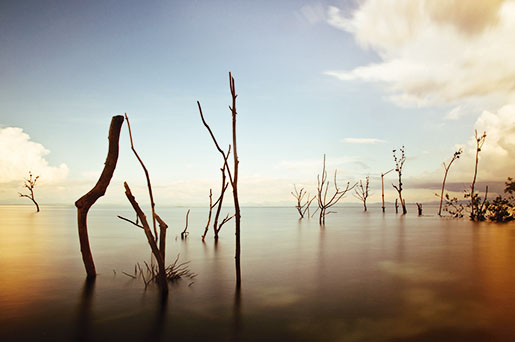