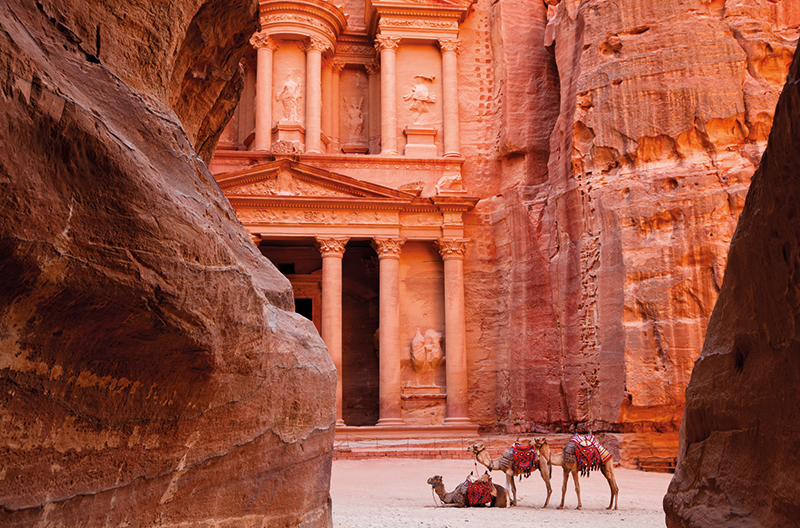 Did you pay attention in Ancient History lessons at school? Regrettably, as a shortsighted teenager obsessed with the present, I found the subject boring and irrelevant. At a riper age, I’m in Jordan for the first time and finally, my patchy vicarious knowledge starts to fill in the gaps of this region’s fascinating historical jigsaw.

Ancient history lessons are now a leisurely pursuit, while I soak up and distinguish the occupation between various cultures over the eons of time. From Edomites, Ammonites, Romans, Byzantines, Israelites, and Nabataeans to the current day multicultural mix of Arabians and Bedouins, it’s a historical feast.

Given the region’s conflicts, I was asked if I thought Jordan was safe, sharing the contentious borders of Saudi Arabia, Syria, Iraq and Israel, as it does. Recently, the answer is yes, as tourism is one of its largest foreign incomes and Jordanians pride themselves on providing safe passage for travellers eager to unlock the mysteries of their archeological history and birthplace of three major religions – Judaism, Christianity and Islam.

Statistically, the taxi ride to the airport isn’t safe, and slipping over in the bathroom is pretty common also. Nevertheless, I decided to take the trip and what’s more, at the moment Jordan has less tourists, thus less crowds.

An expert local guide is essential and our guide Waleed Hiasat, methodically unfolds layers of history from the very first day with visits to one ancient ruin after another. His knowledge and prowess as a historian and Arabic cultural ambassador is the basis of a fascinating six-day conversation.

As travellers, religious and cultural differences draw us together, dispelling misinformation which is the most enlightening part of travel. On the topic of politics and religion, I was politely told not to ask what religion or politics people practiced in Jordan, as this is considered intrusive and irrelevant within the daily social interaction between locals and new friends. Advice I did take!

Jordan has several archeological and natural attractions, with the most popular sites being Amman, Petra, Wadi Rum and the Dead Sea. A round trip can be tailored between each location and we manage to comfortably fit it all in over six days. 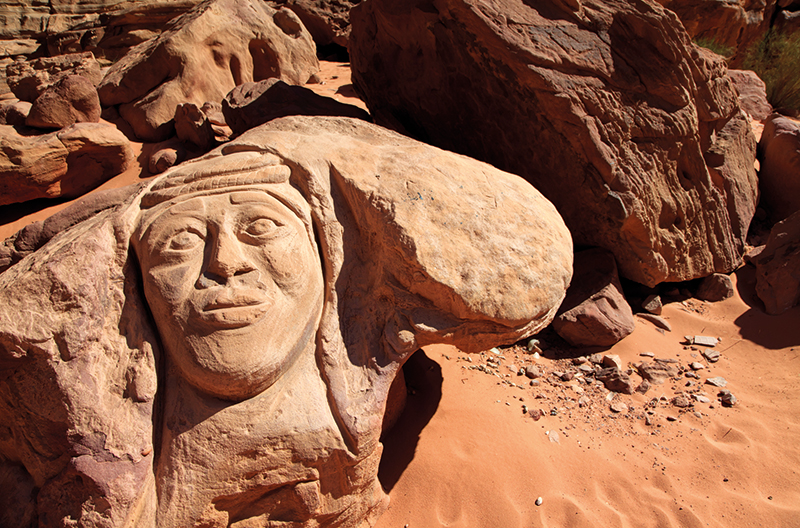 Amman, the capital and gateway to Jordan, was once the Roman city of Philadelphia, (meaning brotherly love). It’s very hilly, and intricately linked by sprawling classically dense low-level Arabic architecture with a Mediterranean touch and all in the consistent brown-washed colour of the surrounding desert. Skyrise buildings have recently modernised this city, with shopping malls and trendy
suburbs emerging with great restaurants and galleries with a multicultural clientele of locals and tourists.

Situated between the desert and the Jordan Valley, ancient ruins are the draw card, including the famous 2nd century A.D. Roman Temple of Hercules and the grand dome of the Umayyad Palace complex. Within view across the valley is the 6,000-seat 2nd century A.D. Roman Theatre carved into a hillside protecting it from most of the day’s sun. It’s still used today as intended, for cultural, musical and theatre events.

Four hours’ drive from Amman is Petra, a UNESCO World Heritage site and one of the Seven Wonders of the World, and for good reason. It sits at the end of the Siq, an astonishing corridor to this ancient city via an approximately one-kilometre walk into a narrow chasm of towering walls of red glowing sandstone, formed by shifting tectonic plates. It was once a bustling Nabataean city and strategic cultural trading hub, carved out of rock and famous for several archeological sites and its water conduit system. 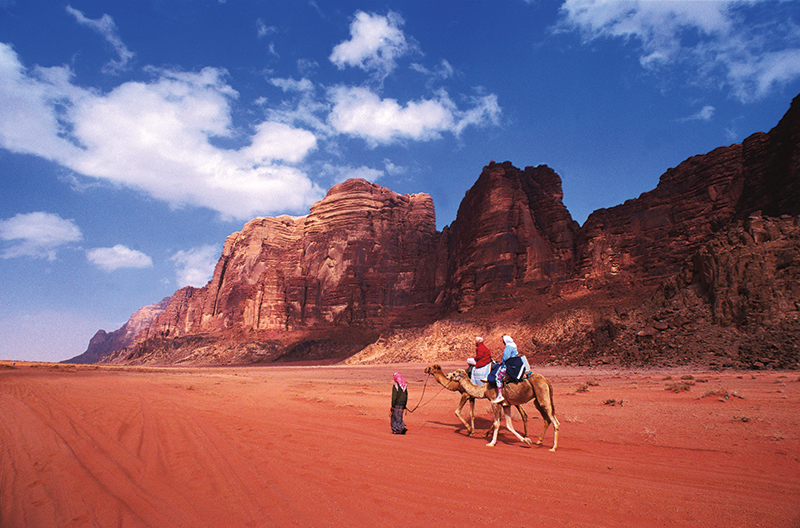 It’s best discovered at sunrise when the rich morning light helps capture incredible photos of Al-Khazneh – The Treasury – an astonishing temple made famous by the Harrison Ford movie Raiders of the Lost Ark. El Deir – The Monastery – is another temple and is the second most visited sight in Petra, along with several other ruins, tombs and caves later influenced by the Greeks and Romans. Petra is a sight to behold and one of the world’s finest and best-preserved ancient sites of civilisations we are still learning from. Their craftsmanship, use of rope, pulleys, tackles and geometrical lines aligned by the sun, were the equivalent modern innovations of today’s technological advances.

Only a 90-minute drive from Petra, in southern Jordan, is the lesser-known Wadi Rum, fabled as The Valley of the Moon by Lawrence of Arabia. A protected desert landscape with Bedouin camps, Wadi Rum is, in my opinion, the jewel in Jordan’s crown. Recently, it was the set for the Ridley Scott film The Martian starring Matt Damon. It’s a harsh and desolate landscape, with huge imposing granite and sandstone rock formations and sweeping sands of rugged beauty, leaving all who visit, awestruck. This astonishing location is as close as I will get to another world and it’s a part of our planet. I feel privileged to have witnessed it. 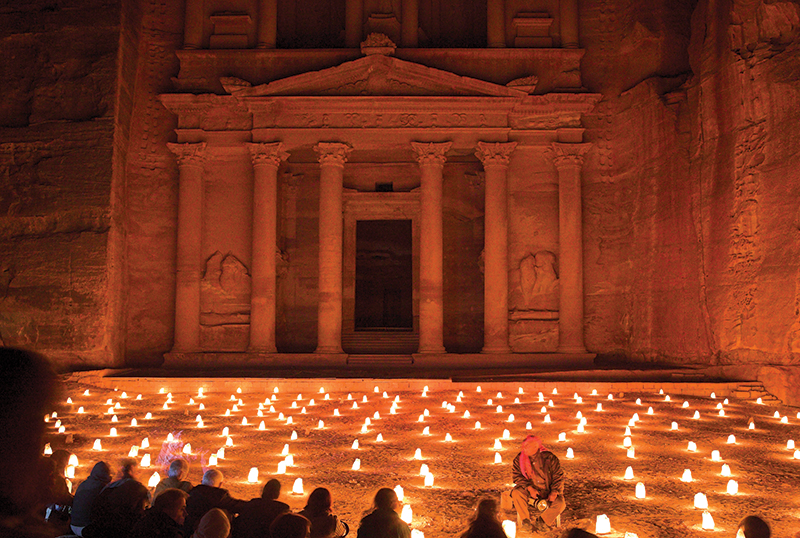 Tourism and eco-adventure have become increasingly popular as the local Zalabia Bedouin now offer travellers stays in luxury desert camps, rock climbing, trekking, 4WD tours, horse and camel safaris all under a blanket of breathtaking stars. You may even see Mars if you know where to look.

Jabal Umm ad Dami, just 30 kilometres from Wadi Rum Village has the highest elevation in Jordan, juxtaposed by the descent to the Dead Sea, which is literally, ‘all down hill’ and the lowest point below sea level on the planet. A good four hours’ drive from Wadi Rum, the last hour is as spectacular as it is panoramic, with views of the entire Jordan Rift Valley with Israel and Palestine in the distance. 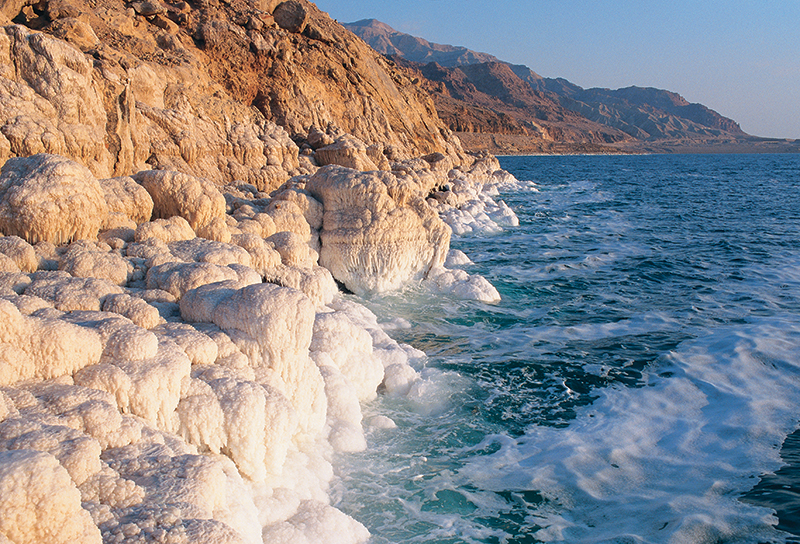 Overnighting at the Dead Sea is recommended with a longer stay to soak up the Sea’s healing properties even better. We are privileged to stay at the huge five-star Kempinski Hotel Ishtar, which is regarded as one of the best resorts in the Middle East, boasting exclusive shore line access and health spa packages. Opulent and of a Mediterranean and European style, this resort’s unique spa offerings are unrivalled with cleansing mud applications complemented by the water of Dead Sea itself. The incredibly high salt content – 34.2 per cent – gives the same sensation of warm oil on the skin. What’s more, the buoyancy is remarkable as nothing sinks – you can even read a magazine while floating. The name is a contradiction given its centuries-old healing properties, and as such it is home to the oldest health spas on record. The day’s shimmering heat haze fades into a spectacular sunset and as night sets in, the lights of Israel and the West Bank create a spectacular backdrop.

To experience all of the above, I recommend visiting them in the same order, as the return trip to Amman from the Dead Sea is only an hour’s drive away. Jordan’s tourist crowds will return in huge numbers soon, so get there before they do and enjoy Ancient History lessons on your own terms. •

Photography by Jordan Tourism Board.

Getting there
Qantas fly daily direct to Dubai with connecting Emirates flights to Jordan. qantas.com; emirates.com