This is a place where time moves a little slower. Where the curve of the coastline is dotted with rainbow-coloured boats bobbing in the turquoise water, while woven beach umbrellas sit pretty on the slightly yellowed sand. A place without roads or cars and limited Wi-Fi.

Peppered throughout the South China Sea on the northeast coast of Malaysia, the Perhentian Islands are a collective of seven atolls, most uninhabited, a mecca for snorkelling and scuba dive sites for their warm crystal waters teeming with coral reef and marine life.

The name “Perhentian” means “stopping point” in Malay and nods to the traditional role of the islands as a waypoint for traders between Bangkok and Malaysia. While maps from the nineteenth and twentieth centuries attribute the name to “The Station Islands,” a term from the British colonial period and the English translation of “stopping point”.

For centuries, the islands were inhabited by fishermen, but in 1994, they were declared a marine park, prohibiting fishing within 3.2 kilometres of the shore. Pulau Perhentian was also one of the islands Vietnamese refugees landed on during the 1970s.

Today the two main islands of Perhentian Besar and Perhentian Kecil are idyllic destinations fusing leisure and indulgence. Think tropical sunshine and technicolour coastlines, bobbing boats and beach bars. If you were looking for a lesser known paradise, you’ve found it.

Whether you’re into exploring less travelled location or needing some serious R&R, the Perhentian Islands are a must-do. And begs the question, are these islands the new Bali?

Perhentian Besar is all the beauty without the party and social scene. Popular with couples, newlyweds and families, you’ll find a more premium and polished experience with several luxury bungalows and villas. The so-called “Big Island”, the bigger of the two, exudes a quieter, more relaxed feel while offering an abundance of outdoor pursuits – trekking, snorkelling and diving. And you can expect to pay more for food while at it.

The island is the abode of a profusion of hidden bays and quiet coves, with Turtle Beach touted as one of the best beaches on the Perhentians. Along with snorkelling favourite PIR Beach, Tuna Bay and Bubbles Beach.

Perhentian Besar is a paradise for nature lovers and hikers, adorned with spectacular ocean vistas and jungle views. You can walk around the beach path from Tuna Bay to Teluk Keke Beach (approximately 10 minutes) and hike through the jungle from Teluk Keke Beach to Arwana Beach (about 40 minutes). You can also walk from Arwana Beach to Perhentian Island Resort (PIR) (approximately 50 minutes), and you’ll want to stop for a swim and snorkel at PIR Beach. 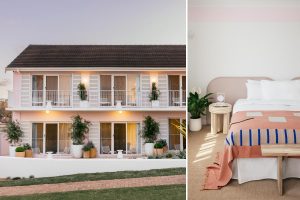 Perhentian Kecil attracts a younger crowd for its mix of nightlife and nature. The accommodation is more rustic, and tourism offerings are more casual. Sunshine hours are spent snorkelling, jungle trekking and diving, and when the moon rises, the music gets louder, fairy lights flicker, and the dance moves come out. The island has also earned its spot on the infamous Banana Pancake Trail – the unofficial track many travellers trace through Asia, with significant stops reflecting factors of affordability, adventure and bustling social scenes.

The island is divided into two sides: Long Beach on the east and Coral Bay on the west, which are connected by a 15-minute partially bricked jungle trail. Long Beach is known for better beaches and more eating, sleeping and nightlife offerings.

There’s also a dive centre and a recreational centre tendering a repertoire of adventure activities and more sedate alternatives, from snorkelling and island hopping to trekking trips and private beach drops and day excursions to wetlands and waterfalls.

Things To Do in the Perhentian Islands

The Perhentian Islands are ideal if you’re a nature lover with a love of the sea and its activities. Holiday goers are known to return with sun kissed faces and smiling eyes after whittling away the hours traversing the tides. While that intent on more demure activities line the shores like lizards until they are baked golden.

Loads of dive companies scattered along the water line with the shells and coral. It’s worth popping into each and comparing prices for dive courses and day trips. Be sure to check out Tukun Laut, or “The Temple of the Sea,” as it’s fondly known, which is one of the best dive sites in Perhentian, known for giant puffers and morays. Terumbu Tiga, also known as “The Three Brothers” or “T3”, is another site worthy of the hit list. It’s made up of three large building-sized boulders and features several caverns and swim-throughs. The 90-metre cargo ship known as Sugar Wreck is another favourite, known for cobias, bamboo sharks and scorpionfish.

As you walk along Long Beach, you’ll notice the technicolour signage advertising water taxis and snorkelling day tours. Snorkel trips can be booked at the beach kiosks and usually include a boat trip to several sites, including Turtle Beach (the location of a turtle sanctuary), Tiga Ruang (the abode of tiny fish including clownfish, sergeant major and black striped angelfish), and Shark Point (a spot frequented by blacktip reef sharks). It’s best to go in the morning before the winds come in. And be sure to organise your trip a day or two in advance, especially during peak season.

Santai at BuBu Resort on Perhentian Kecil’s Long Beach is the picture-perfect place to perch with a pina colada. For those looking to pair a drink with something more substantial, their seaside restaurant, known for its beachside barbeque, boasts a broad menu of European and Asian cuisines.

If you’re going for basic, budget, or something a little more luxe, Perhentian Kecil sports something for every traveller. Whether beachside camping is your thing, or maybe a stay in a more traditional guest house, bungalow or ocean villa or resort.

If it’s simple and cheap you’re looking for, the two-person beachside tents on Long Beach are a great option. Tent hire will set you back between RM30-40 (approximately $10-13AUD) per tent. You’ll be, quite literally, a stone’s throw from the ocean, with a vibrant social scene at your doorstep.

Those looking for a ‘resort’ experience will feel right at home at Mimpi, where the rooms are modern and French doors open onto a dreamy view of the colourful curl of coastline. Postioned on the southern end of Long Beach, by the pier and with direct access to the beach, immerse in a salt-water infinity pool, a wellness spa boasting beauty treatments, and an all-day buffet restaurant. The downfall? The lack of alcohol available due to it being a halal resort.

Perched on the southern end of Long Beach, Bubu boasts 18 gorgeously appointed villas designed with a fusion of traditional and contemporary features. You can spend all day soaking up the sunshine on a private sun-lounger. And by night, work your way through the delicious Italian restaurant menu on-site.

Getting to Perhentian Islands

Getting to and from Perhentian Kecil and Perhentian Besar is primarily via speed boats from the jetty at Kuala Besut, a small, vibrant town on the east coast of Malaysia. Although there is no fixed schedule, boats run between 7am and 5pm and will drop you to any of the main beaches. Return tickets for the 30-minute speed boat journey can be bought at the jetty.

Get to Kuala Besut by bus, car, plane, or train. The nearest large town and airport at Kota Bharu is an hour away by taxi or 90 minutes by bus. Direct coach to Kuala Besut also runs from Kuala Lumpur and Penang.

If you want to travel between the two islands, be it for snorkelling, scuba diving or general traversing the tides, you can take a water taxi. And your primary mode of transportation on the island will be your feet – thongs are optional.

The high season is between June and August when the diving conditions are best. The best season is April to May for those travelling on a budget and keen to avoid crowds. The monsoon season runs from mid-October to February, when the islands are closed to travellers with resorts shut. And many of the locals clear out too.