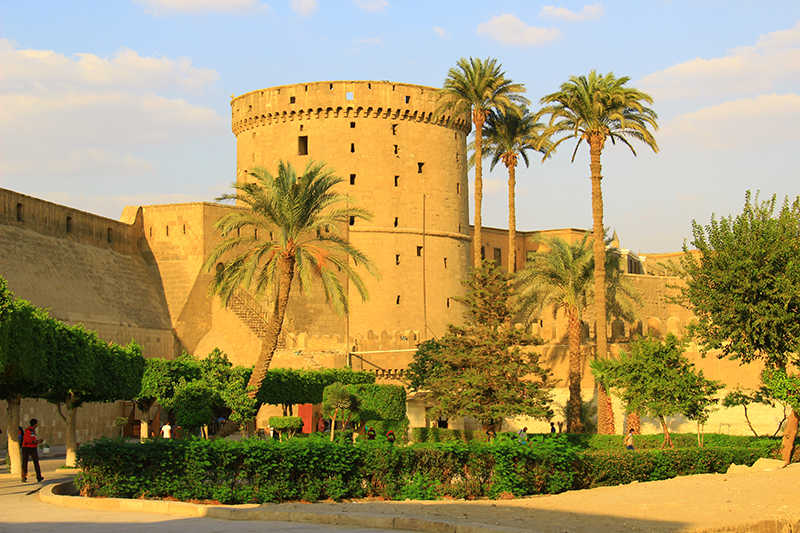 It’s the ancient thoroughfare of medieval Cairo, the lifeblood of a dozen centuries: every time I return to Cairo, I find myself walking the length of Al-Muizz li-Din-Allah. Like most before me, I’m lured by the street’s imposing palaces and caravanserais, its dusty mosques and vivid markets.

I’ve walked this street countless times over a decade, and each time, I make a new discovery. A forgotten tomb. A synagogue. Cool, dark water cisterns that plunge deep underground or a merchants’ mansion, instructive in the ways of generations of traders, aristocrats, craftsmen and families who filled the streets of Islamic Cairo when it was established by the Shi’ite Fatamid regime in 969AD. 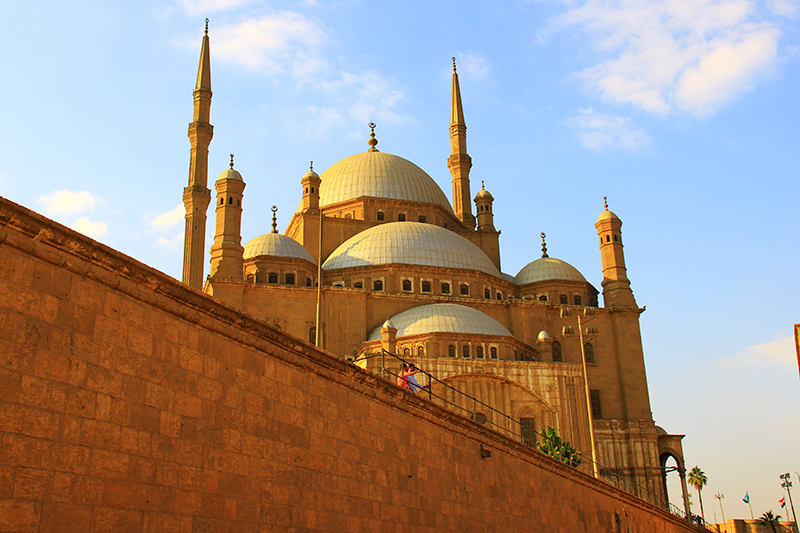 The Fatamids had big plans for al-Qahirah, the ‘Victorious City’, which was built as a showcase of its authority across the Islamic world. Instead of tacking their seat of power onto the existing metropolis, the idealists built their own great walled city, slicing it in half with the palatial thoroughfare, Al-Muizz. The main section of the street runs about 1.2 kilometres, bookended between two of medieval Cairo’s city gates, the dominating Bab al-Futah (the ‘Gate of Conquest’) in the east and Bab Zuweila in the west.

Like many great buildings in Cairo, Bab Zuweila’s foundations are massive, inscribed stones dating from Egypt’s pharonic era, and named for the ferocious Berbers who guarded the walled city’s southern door, stringing their enemies’ heads from the gate. 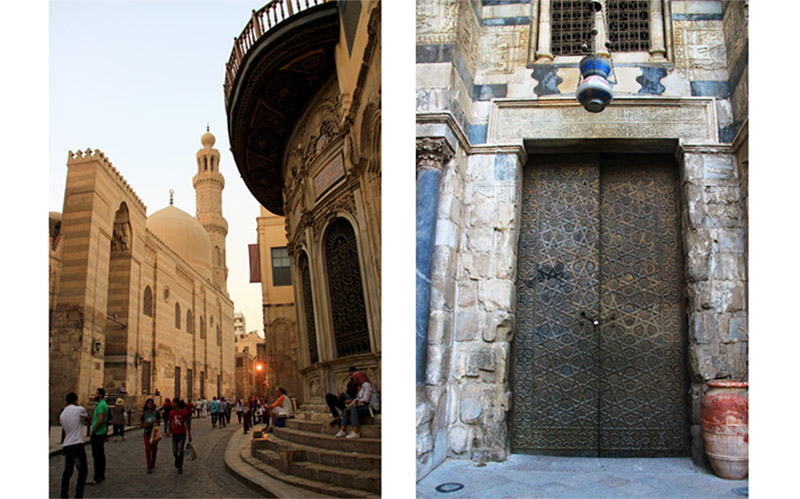 It continues up to two of Egypt’s most significant and beautiful mosques, Al’Rifa’i and Sultan Hassan, all the way up to the Citadel, reworked from a pretty outlook into a military garrison by the great Syrian conqueror Saladin, in 1176. Cairo has long burst its vast city walls and, until recently, Al-Muizz languished as a dirt road, potholed and filled with the soup of a millennium.

However, the northern section of the street, from Bab al-Futah to the bewilderingly busy Al-Azhar Street, is beautifully paved. This is Bein Al Qasreen, or ‘Palace Walk’. At sunset, its turrets, towers and the imposing, 1000-year-old gate begins to glow, lit from the ground to cast a rainbow of light across their beautiful faces. The extravagant promenade lures photographers, fine artists with their easels, walking tour groups and local admirers – and me – until late in the evening. Along the way, buy a heart-shaped stick of fairy floss, a shisha pipe, a portrait of the last king of Egypt, or perhaps a vintage black telephone. 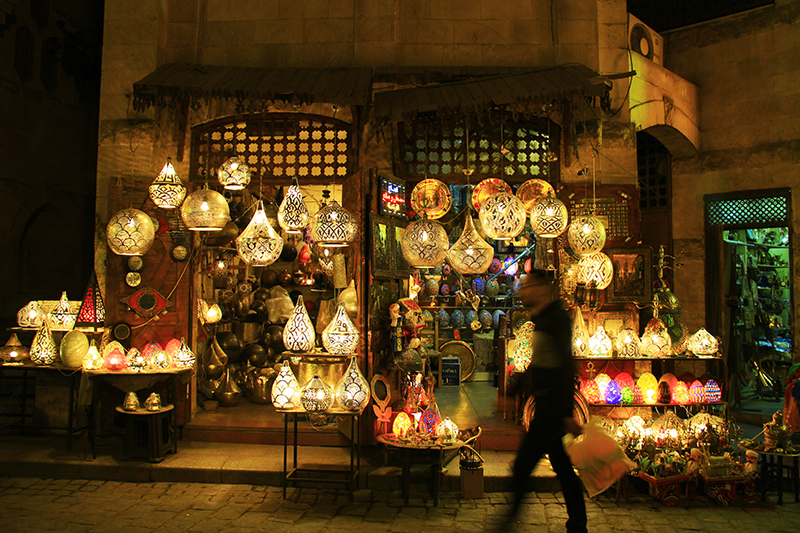 But the true stars of this UNESCO World Heritage Site include the madrassa (school), minaret, hospital and mausoleum of Qalawun, its inlaid stone, stained glass windows, marble and soaring ceilings masterfully created in just 13 months in 1285. There’s the beautifully modest Mosque of Al-Aqmar, built in 1125 now sunken into the street, and the oldest building on the street, al-Hakim Mosque, which in the past also served as a prison, stable, school and even a fortress under Napoleon. Its great age – the mosque was built in 928 – is belied by its cool, white interiors, thanks to a renovation by an Indian Shi’a benefactor in 1980.

Also on your list should be the Madrassa & Mausoleum of Barquq, built in 1411, and the Sabil-kuttub (water stand and library) of Katkhuda, a charitable building supplying water and knowledge. Built relatively late in 1744, it was built squarely in the middle of the street: step to one side to enter the Egyptian Textiles Museum. Running off the main street are alleyways that lead into fantastical lantern shops, cafes, surprisingly quiet squares populated only by a dust-laden antiques trove or a craftsman making Egypt’s distinctive boxes decorated with mother-of-pearl inlay. 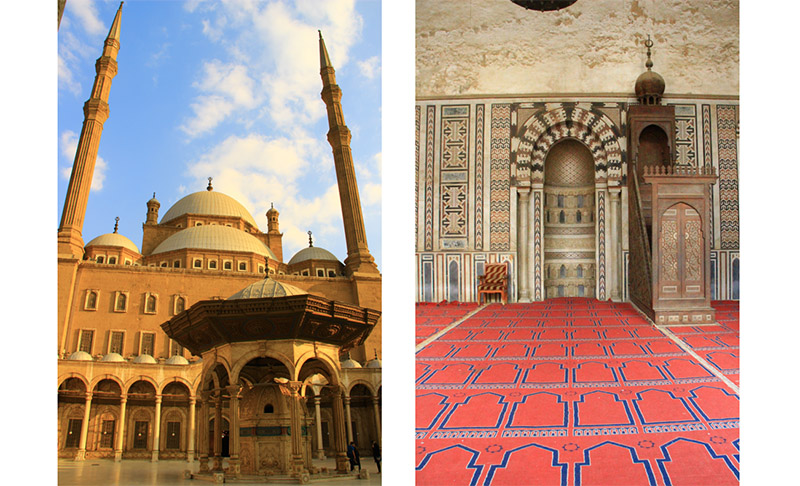 Drift into a street of coppersmiths’ tiny workshops or spy a man brewing the coffee and sweetening the tea that fuels the market for the long day. Long-legged boys run the streets, trays loaded with small glasses, steady against the onslaught of traffic that cuts the ancient thoroughfare in two. The best time to begin your visit to Al-Muizz is an hour before sunset: set your orientation, then let it spin into the air, which sings with the maghreb call to prayer from 100 mosques as the sun dips below the horizon in the west.

To my mind, there is no finer view of Cairo than from the roof of the Al-Ghouri or Sultan Al-Muayyad mosques: for a handful of Egyptian pounds, the mosque attendants will take your shoes and lead you to the rooftops, where 100 loudspeakers broadcast the call to prayer. To one side of Al-Muizz is Cairo’s mad bazaar, Khan al-Khalili, the city’s heart of trade in gold, copper, fragrances and fabrics since the 1400s. Add a modern layer of Nefertiti fridge magnets, sawdust-stuffed camels and gaudy belly dancers’ costumes, countered by hand-thrown ceramics from the Egyptian oases and antique chandeliers from crumbling mansions for a heady mix of tat and treasure. 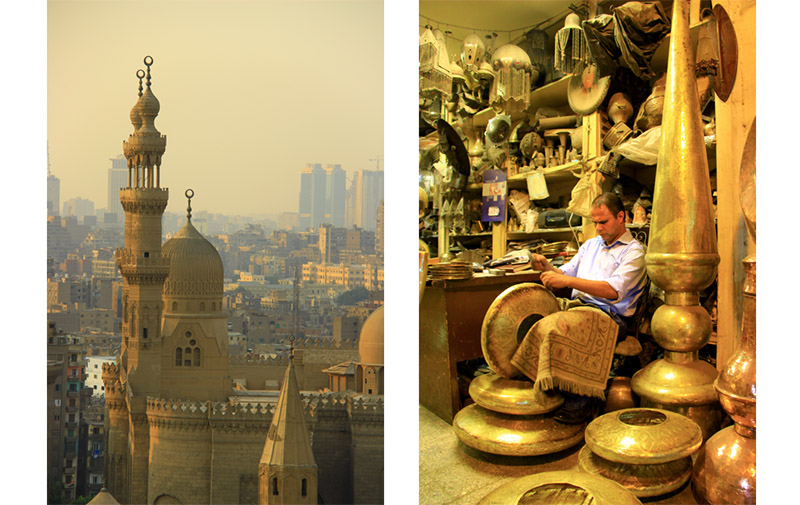 Crossing Al-Azhar Street, look up to the most spectacular 16th-century Sultan Al-Ghouri complex, with its two pillars straddling Al-Muizz. In its heyday, it was a mausoleum, a sabil-kuttab, a mosque, madrasa and a khanqah – a gathering place for Islam’s mystics, Sufis. They still gather today, performing their whirling rituals to Egyptians and visitors every week. Such lofty concerns are counterbalanced by the frantic trade in scarves and socks at Al-Ghouri’s grand feet. From here, Al-Muizz moves from pleasantly jumbled to downright chaotic: shops selling diaphanous nighties and leopard-print lingerie rub shoulders with Cairo’s last maker of the tarboosh or fez, the distinctive red cap with its black tassel made famous under the Turkish Ottoman rule. 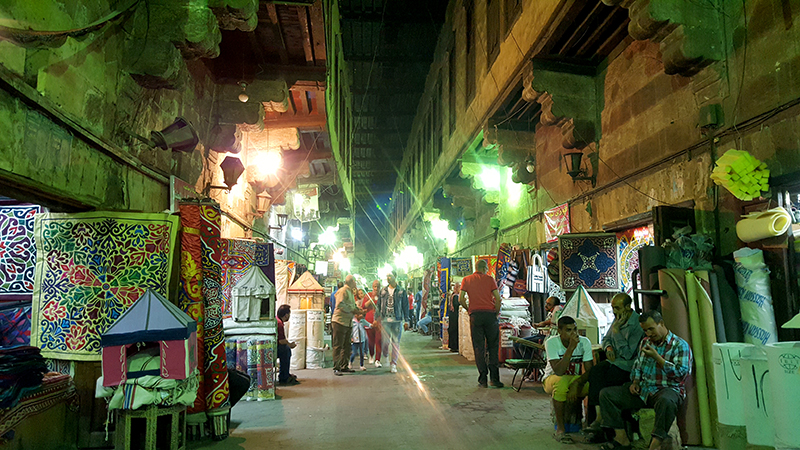 This side of Al-Muizz has yet to enjoy renovation, and sees few tourists, but persist to Bab Zuweila, passing another water cistern: the Sabil of Muhummad al-Pasha, which was built in 1820 and restored with international funds. Like many of Egypt’s monuments – think back as far as Abu Simbel on the Sudanese border – its construction was an exercise in public relations. Built in the Turkish Ottoman style, it sent the message: Egypt is part of this empire, and we are amongst you. Don’t turn around the minute you reach Bab Zuweila – 50 metres more will take you into the atmospheric Tentmaker’s Souq, or kheemiyya, where men stitch embroidered cushions and runners, or cut tablecloths to fit.

The name comes from the bold Islamic fabric backdrops that are used for every occasion – weddings, funerals, Ramadan evenings. Look up to spy elaborately carved wooden screens, or mashrabiya, which would shield the women of the household, but allow them to watch the world unseen. The street winds deep into the neighbourhood of Darb el-Ahmar (the Red Road) and up to Cairo Citadel, seat of military power of a legion of generals and conquerors, from Saladin in the 12th century until Egypt’s last king, Farouk, who built a military museum here in the 1940s. 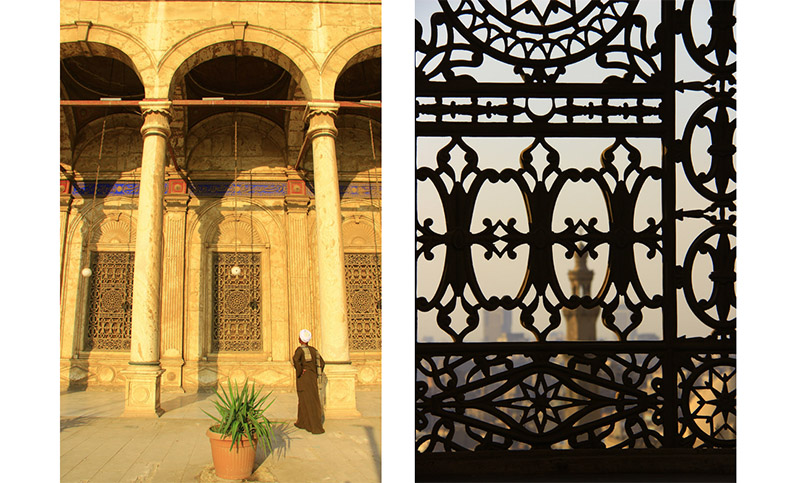 Old Cairo hands know the best place for respite is deep in Khal al-Khalili, at the acclaimed writers’ café, El Fishawy, which has not closed its doors – neither day nor night – for 400 years. Egypt’s only winner of the Nobel Prize in Literature, Naguib Mafouz, wrote Palace Walk here, where he grew up. For a crazier experience (with fewer street hawkers), order cold mango juice and a perfumed shisha pipe at Lords Café, decorated with a lifesize model of Egyptian diva Umm Kolthoum and the more recent edition of a suspiciously tall mannequin of the current Egyptian president, al-Sisi. The Victorious City has changed dramatically since the 2011 revolution, with brand-name shopping malls and whole new cities (with such inventive names as New Cairo) sprouting in the desert past the city limits.

However, the heart of the city remains, with its 1500-year-old Coptic churches, its 700-year-old markets, its palaces, mosques and mansions. And the beat is strong. • 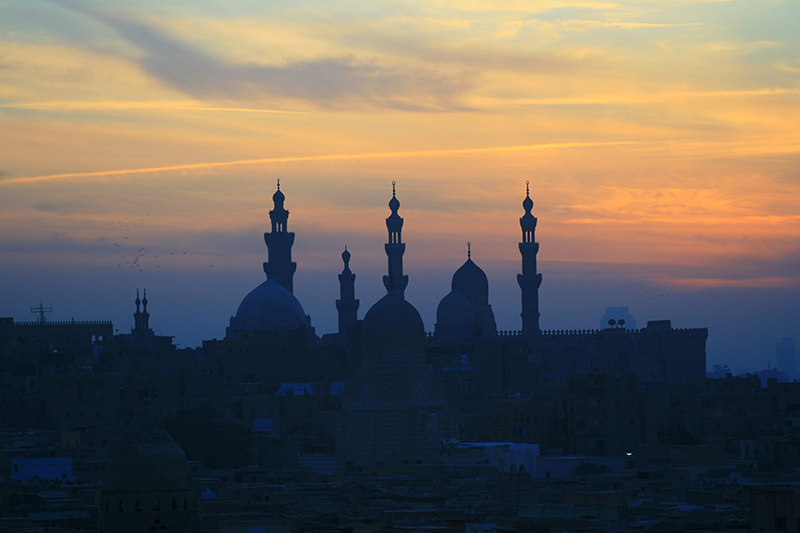 Getting there
There are no direct flights between Australia and Egypt – the most convenient connection is through Abu Dhabi or Dubai with Etihad or Emirates. etihad.com; emirates.com

Where to stay
Ritz-Carlton Nile, opened in 2015, is right beside the Egyptian Museum on Midan Tahrir (Tahrir Square): ritzcarlton.com
Sofitel Cairo Nile El Gezirah is on an island in the Nile, in the centre of the city: sofitel.com
Le Riad Hotel is a 17-room hotel decorated in traditional Egyptian style, right on El-Muizz.

When to go
Avoid Cairo in summer (June to August) when temperatures spike.

Further information
Many sites are open to the public, for a fee, though not are all obvious. Team up with local specialists Abercrombie & Kent to get access above and below the street: abercrombiekent.com.au
egypt.travel