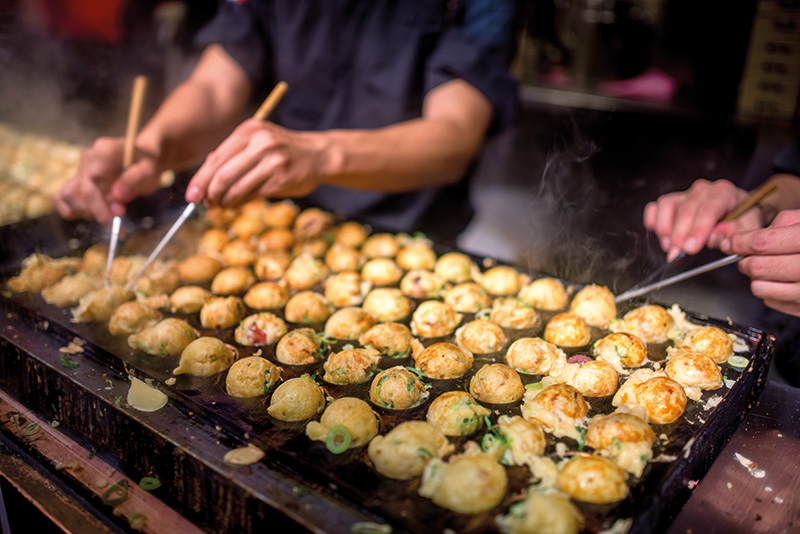 In the midst of a sprawling, modern city crowded with cloud bursting towers and neon lights, sits a moated 16th-century shogunate castle, surrounded by parkland strewn with plum and cherry trees. Osaka Castle is one of Japan’s most iconic landmarks, and though it once played a major role in the unification of Japan, today it is a love of food that unifies the people of Osaka.

Known as Japan’s undisputed gastronomic capital, it is said that the people of Osaka spend more money on food than on anything else. In fact, the city is often referred to as Kuidaore – the time-honoured pursuit of ruining oneself with food, exactly what this hungry writer sets out to do.

Taking it to the streets

With a gluttonous goal of eating my body weight in Osakan street food, I barely pass go, or my hotel, before diving belly first into the neon lit streets of Dōtonbori. I get immediately lost – a skill I have honed to a fine art since arriving in Japan with its endless, nameless streets and multi-exited stations. Fortunately, I’ve also mastered the art of staring gormlessly at a map and it takes just minutes for one of Osaka’s chivalrous residents to come to my rescue. But instead of merely pointing me in the right direction, my knight in pinstriped armour escorts me several blocks out of his way to deposit me right into the tentacled embrace of a giant pink octopus in the centre of Dōtonbori Street, before disappearing wordlessly back into the darkness, no doubt on a mission to rescue another hopelessly lost tourist. 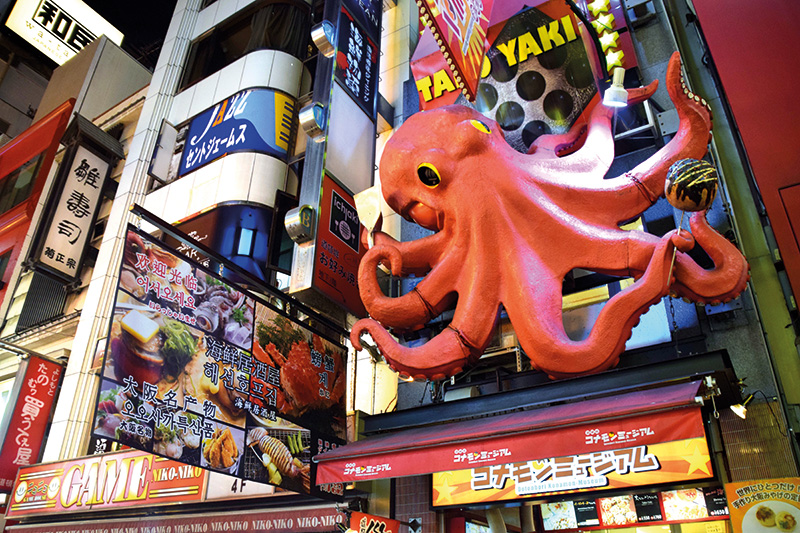 With literally hundreds of eateries lining the neon-lit street, I don’t know where to start. The belly of the beast, or at least Dōtonbori Kukuru Konamon, the takoyaki vendor that sits under the dangling limbs of the cerise cephalopod, seems as good a place as any. I order a dozen takoyaki, which proves to be a wise decision. The addictive balls of flour, eggs and dashi are crisp on the outside and creamy on the octopus-studded inside, then flooded with sauces.

Ready for more, I size up the many winking and blinking oddities beckoning for my custom. An enormous glowing dumpling and gaudy six-metre robotic crab beckon, but I decide to forgo their mechanised charms and stop at Kushikatsu Daruma for kushikatsu, delicious wands of deep-fried meats and vegetables fried in crispy panko crumb.

But still there are more tastes to explore and I’m ready to take on the city’s most famous dish, okonomiyaki, a thick savoury pancake. The ultimate in Osakan soul food, okonomiyaki means “what you like, cooked,” though generally that’s going to be a pile of shredded cabbage in batter, flavoured with the meat or seafood of your choice.
I head straight for Mizuno, reputed to produce Osaka’s best, to join the queue. My traditional pork belly and shrimp pancake is topped with dancing bonito flakes, sweet and tangy otofuku sauce and kewpie mayonnaise, and is more than worth the wait.

Having adequately lined my stomach, I decide to take the death-defying leap of faith into Zuboraya Dotombori for a taste of their infamous fugu. Made from the flesh of a species of puffer fish that boasts a neurotoxin 1,200 times stronger than cyanide, consuming incorrectly prepared fugu can have a few unpleasant side effects, like death. I check that the restaurant employs certified chefs before I take on a platter of fugu sushi, as I have no desire for this meal to be my last. Especially given I don’t find the flavour or the texture of the killer fish particularly enjoyable.

Sated, and alive, I head back to the InterContinental Osaka, just a five-minute undercover walk from JR Osaka Train Station in the newly developed Grand Front Osaka, where waiting in my plush suite is a platter of pretty Japanese sweets – the perfect dessert after my evening of extreme street food consumption. 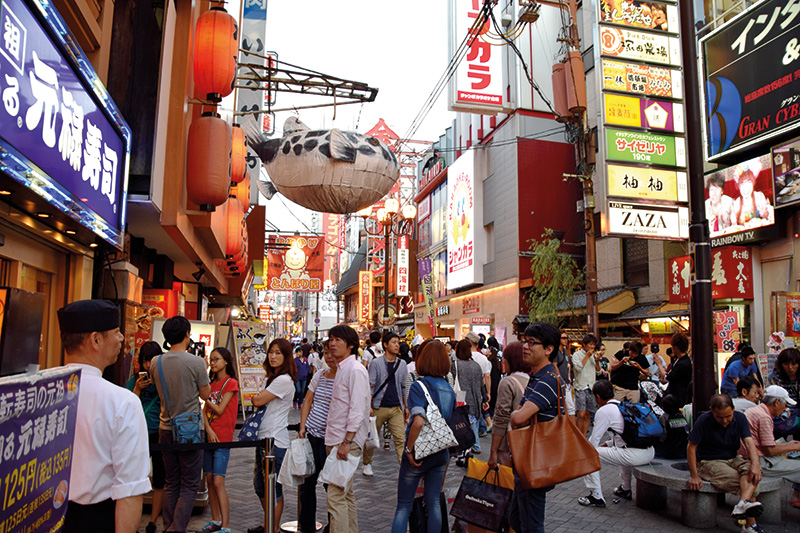 When the hunger pangs start the following day, I explore Grand Front – a shrine to conspicuous consumption that’s enormous even by Japanese standards – to find almost 100 eateries and bars scattered amongst the trendy flagship stores of international fashion emporiums and lifestyle brands.

I join the queue waiting to lunch on the Franco-Japanese stylings of Shunkoku Shunsai, a collaboration between noted Tokyo restaurateur Kiyomi Mikuni and pharmaceuticals giant Rohto. The focus here is on healing cuisine, which I figure has to be a good thing after the previous night’s fling with fugu.

Osaka is also home to its very own constellation of stars, Michelin-stars that is, with 89 restaurants worthy of one or more of the coveted culinary gongs. And my insatiable stomach cannot resist their siren call.

I decide to splurge at the sublime Iroha, renowned for its devotion to the spirit of kaiseki, the traditional Japanese multi-course meal. A culinary must for any self-respecting foodie, authentic kaiseki doesn’t come cheap. But at Iroha, the 13 flawless courses of edible art are more than worth stretching the budget for.

While Osaka isn’t a city that’s focused on traditional tourist sights, there is no shortage of non-culinary activities to enjoy between meals.

Explore pulsing, neon-hued neighbourhoods such as DenDen Town with its many multi-level shrines to gaming and gadgetry, AmerikaMura for live music, cool clubs and bars heaving with Japanese-hipsters, and Midosuji – the Champs Élysee of the Orient – to splash the cash on ultra high-end labels including Louis Vuitton and Chanel.

Originally built in the 16th century, the five-tiered Osaka Castle is one of the most important and visited tourist attractions in all of Japan. Destroyed and rebuilt many times
in the following centuries, its current incarnation was constructed in 1931. Surrounded by water, a river cruise is one of the best ways to view it. 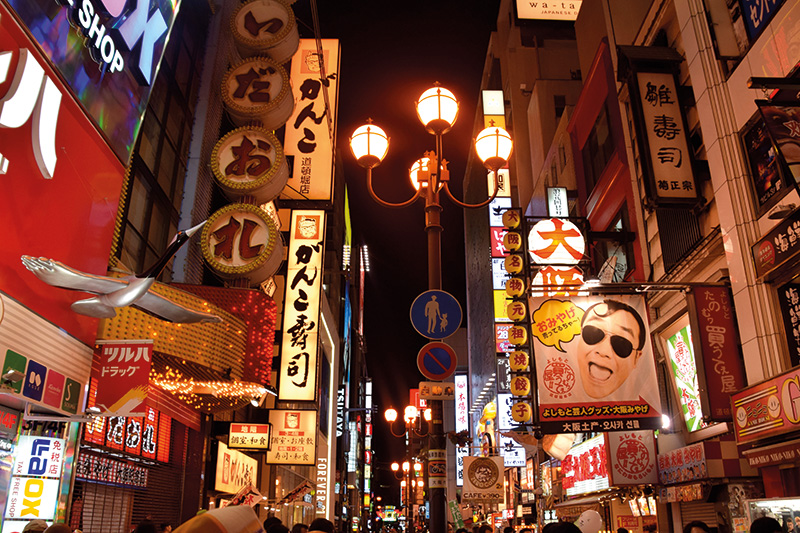 The recently redeveloped Osaka Bay entertainment area has multiple attractions including The Suntory Museum of Art
and The Tempozan Ferris Wheel, one of the world’s largest. It’s also home to the eight-storey Osaka Aquarium, whose multiple habitats are home to a diverse variety of sea life including whale sharks, penguins and giant spider crabs.

For those as obsessed with filling their bellies as I am, there’s also Naniwa Food Theme Park, where myriad stalls showcase Osaka’s cuisine in a fun, old-style atmosphere.

It is Universal Studios Japan that is the Bay Area’s most unforgettable attraction. Ride the topsy turvy backwards roller coaster, take a bite with Jaws in Amity Village, get your dino on at Jurassic Park or just enjoy character meet and greets with Spiderman and Hello Kitty. You can also head to Hogwarts’ inspired The Wizarding World of Harry Potter, to stock up on magic wands and knock back tankards of sweet butterbeer.

If you’d like a little Zen respite from the hyper-stimulated urban energy of Osaka, take the 45-minute bullet train ride to the historic city of Kyoto, the former imperial capital of Japan. Home to an extraordinary wealth of world heritage sites, thousands of Buddhist temples, Shinto shrines, Zen gardens, palaces, pagodas and parks, it is a place to restore the soul. Or just eat some more. Did I mention that Kyoto is the heartland of traditional Japanese cuisine and you’ll find a mean tempura, towers of tofu, sublime soba, and steaming bowls of ramen on just about every corner? •

Jetstar flies direct to Osaka from Cairns with connecting flights to all major Australian cities. jetstar.com