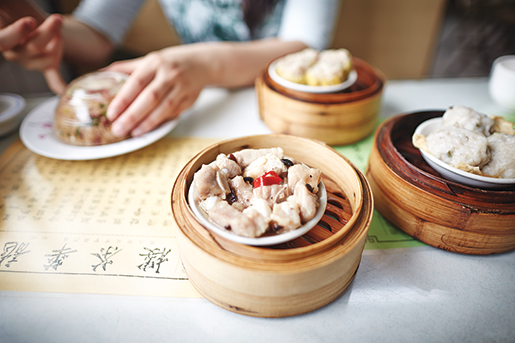 Traditional tastes in the streets and villages of Macau.

Steam rises off the soup stove and merges with the humid air of Macau. Wantons bubble over in the liquid, freshly wrapped by hand just minutes ago. The grandma sits at a table carefully folding the sheets around a mix of prawns and pork. They’re so light that I could eat a village worth.

Everybody in the laneway calls grandma by her Chinese title, Waipo. It’s a family-owned business, with a shop on either side of the alley still known by its Portuguese name of Travessa do Faisao. Kaya toast and milky tea are served on one side of the lane, noodles and wanton soup on the other. The pre working day crowd crush into the tiny tables, politely and without concern for being seated shoulder to shoulder over breakfast.

Macau’s laneways are often narrow and winding as they follow the contours and history of the land. When the Portuguese started building their grand facades in the 16th century they didn’t possess the earth moving equipment of today. Instead they laid out villages on the edges of hills, and for centuries after kept building upwards against the slopes.

These old streets bare the character of Chinese families and the landscape that lies beneath. Laundry hangs on the balconies of apartments above and small Taoist spirit houses are still preserved along sections of footpath. Residents bring incense and flowers to adorn the statues of sages, then throw their scraps of rice nearby for the street cats to feed on.

As you walk through the narrow lanes on peninsula Macau it is often tiles under foot instead of concrete, an ornate nod to Chinese resourcefulness having figured out centuries ago that fired pottery can be both decorative and hard wearing.

Secret walled gardens are hidden amongst the colonial architecture of old Macau, such as the Jardim de Lou Lim IEOC. Over one hundred years ago a wealthy merchant copied the Suzhou recipe of gardens built around water to form this modest-sized gem, now providing an oasis for locals to practise Tai Chi and poetry. Turtles and carp are cared for in the pond by families who bring them bread. 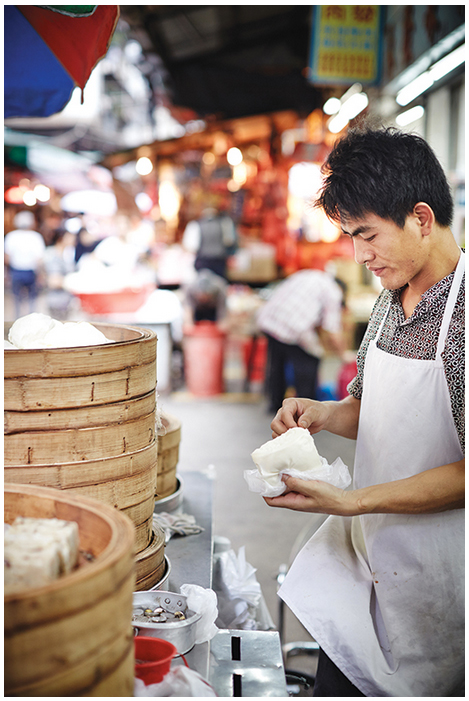 A local bus passes by this garden on its way from the tourist mecca of Senado Square to the produce mecca of Red Market. The seafood section of the market literally jumps with freshness, the thrashing of live eels splattering water onto passing shoppers. Philipino maids come to Red Market to prepare for the evening meal dressed in sequins and high heels, some handling the slippery floors with class and some not.

Outside on the street this market bares a potently South-East Asian flavour. Durian stalls in peak season over-power the smell of steamed buns and dried fish. Roast duck and char su pork are always hot tickets, the sound of cleavers pounding the boards is never far away. A little kitchen under a tin roof bakes almond cookies and sells them by the jar full, an excellent snack before tackling the extensive laneway stalls that adjoin the iconic red building.

These streets of Macau are not so much a gourmet experience but a banquet of indulgence. The produce markets offer an abundance of temptations that are hot and ready to devour. Bamboo steamers are the definition of anticipation, because you know there’s something delicious and savoury hidden away but you won’t know what until you ask. Sometimes it’s pork buns, maybe chicken dumplings or a Macau twist on prawns wrapped in rice paper.

The key ingredient to the best street eats is freshness. The ducks are roasted in front of your eyes, the noodle soup is boiled on the spot and no dim sum spends more than half an hour in a steamer before it’s sold and a new batch racked in its place. Freshness is also the key ingredient to that most recognised of Portuguese culinary influences in Macau, the egg custard tart.

The little fishing village of Coloane sits at the southern tip of Macau and is the original home of Lord Stow’s Bakery. Trays of tarts are popped out of the oven, allowed to cool for a few minutes and then served to customers waiting in line. A modest cafe at the rear of the bakery makes room to sit and enjoy them hot out of the oven with a milky iced tea. The egg tarts in Macau are noted for being less sweet than the Portuguese original and small enough that you don’t have to stop at just one.

Where Coloane is sleepy and peaceful, Taipa Village is vibrant and cheeky. It’s a popular destination for Chinese travellers to seek out matcha flavoured desserts and shop for trendy panda-cartoon souvenirs. Taipa is a melting pot of Macau culture with an eye on the past as it embraces the future. Hidden down a laneway beyond the juice stalls and tea salons is one of the most genuine Portuguese restaurants in Macau, Antonio.

The owner and head chef is Antonio Coelho, a charming man of garrulous proportions. He’s prone to bursting into song and has a way of getting everyone else in the room to embrace the moment. In the middle of preparing flaming crepes suzette at our table he whips out a long sword and demonstrates his preferred technique for popping the cork off a bottle of Espumante. Antonio is doing his best to keep the flavour of Portugal alive in Macau.

Peering down onto the village of Taipa are the glass towers of Galaxy Macau, just one of several integrated resorts that have risen from the reclaimed land that was once ocean. Coloane and Taipa were once distinct islands but the sandy bay between the two has been filled in with land to form the Cotai Strip.

Stepping inside the Galaxy Macau is to step away from both China and Portugal and arrive somewhere completely different. The central lobby is a cavern of marble and lights, with an illuminated water fountain that performs every half hour. Resorts in Macau like to make an impression when welcoming new guests. 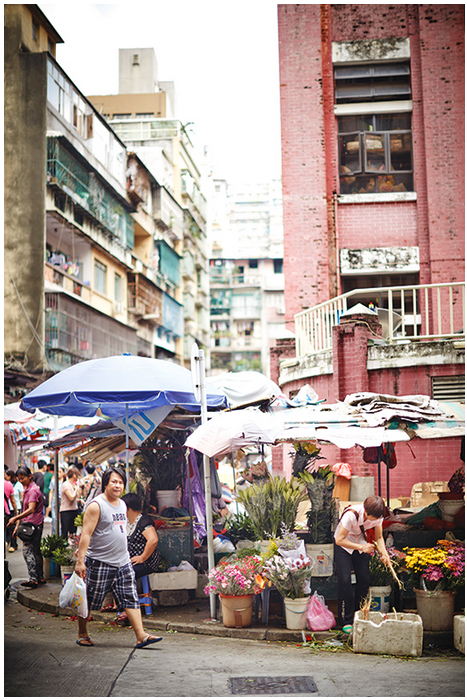 At the centre of the resort is a wave pool with its own beach, providing a place for families to swim in safety and a spectacular view for the hotel rooms that surround it. Access to casinos and fine dining is possible without leaving the resort, and in 2015 the Michelin 3-Star-awarded Umberto Bombana will be adding his name to the dining options at Galaxy Macau.

The Banyan Tree Macau is just one of the hotels in the resort and delivers one of the most impressive experiences in town. Guest can choose from poolside bungalows across from the wave pool, or luxury suites that blend the elegance of Chinese influence with the contemporary flare of modern Macau. Anyone who appreciates the Banyan Tree brand will not be disappointed here.

For my final meal in Macau I head back to the Red Market on the advice of a local. Next door to the faded red block is a modest stairway that leads to the Long Wa Tea House. Upstairs is a large room with tables along the open windows. The breeze is sufficiently cooling and a pot of hot tea lands on the table within seconds of being seated.

A small counter in the middle of the restaurant is stacked with a selection of dim sum. I grab a few bamboo steamers to take back to my table, under the watchful gaze of Chairman Mao.

Every wall of Long Wa is covered in hand-painted art, but the central pillar is reserved for his resolute presence. Macau was never subjected to direct rule under Mao, but his influence was profound and his image appears regularly in shops and homes. Bus drivers always carry a gold framed picture of The Chairman, given pride of place at the front of the cabin. His image alone is believed to scare away the evil spirits.

Mao marks both the beginning of the Chinese reclaiming their city from the Portuguese, and the beginning of Macau’s extensive reclamation of land from the sea. They have mastered the art of respecting their traditions while building a better future. In the coming years many new resorts will be opening with the aim of attracting Michelin stars and higher rollers, but don’t forget the tasty treasures that continue to delight along the streets of the old city.

The hot, humid summers (late May to mid-September) are best avoided. September to December is probably best for bearable warmth, although the winter months (December to February) are milder and make exploring much more pleasant.