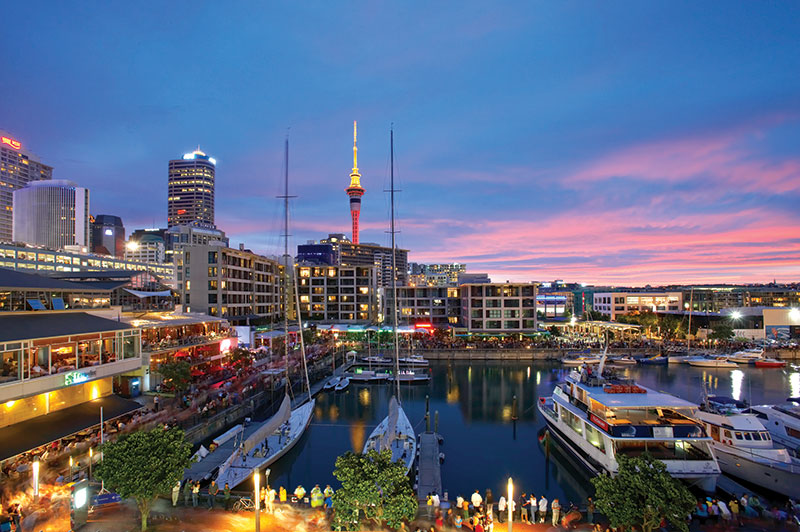 What’s been gradually altering is the sophistication of the wines, food, art and good hospitality offered throughout the country. In and near the cities there has been an explosion of award-winning restaurants and cafés using the freshest local ingredients to produce innovative, memorable dishes. 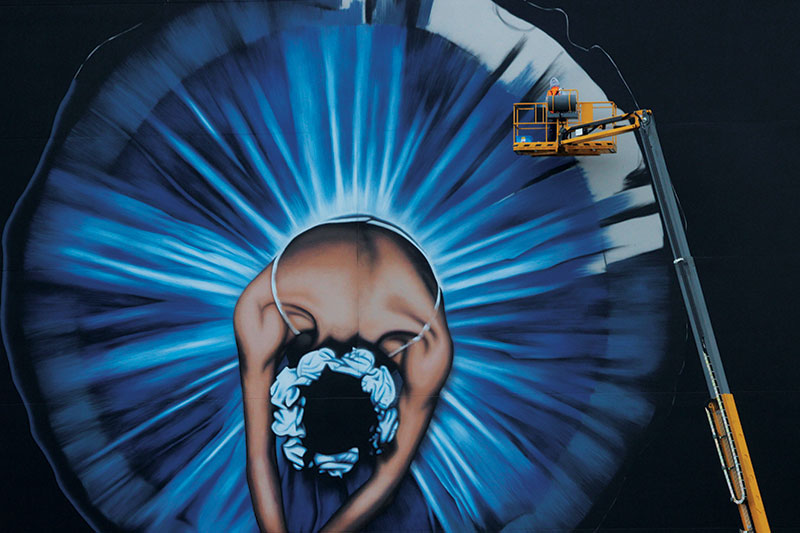 All eyes are on the garden city Christchurch as it grows into its new skin. Five years since the life-changing earthquake of 2011, it’s been renovated and rebuilt using local and international ingenuity, reshaping the South Island’s largest city. Art, food and architecture are redefining it as an exciting centre with a creative vibe.
Giant urban Banksy art has transformed the dull blank walls on existing buildings next to eerie vacant blocks into edgy eye-catching scenes. The mysterious English-based graffiti artist’s use of stencils and satire holds the viewer’s attention.

A Banksy aficionado, George Shaw, owner of one of the largest collections of Banksy work, has transformed Christchurch into a leading centre of street art. Running until the end of April 2016, the Spectrum exhibition ensures brilliant colour and talent is splashed around the city from globally-renowned street artists. After the festival there will be more than 50 major murals. “There’s this fabulous energy that’s happening in Christchurch as the city re-emerges,” says Shaw.

The street art trail can be seen on foot but it’s no hardship to take a two-hour cycle around the flat city streets with Glen Tregurtha from Christchurch Bike and Walking Tours. Previously a graphic designer, he’s the perfect guide and having lived in the city for about 30 years, he takes the less known, more interesting paths.
Tregurtha tailors his rides to suit; for example the ‘architectural ride’ passes the transitional Cardboard Cathedral designed by Japanese “starchitect” Shigeru Ban. It is the only cathedral in the world made substantially from cardboard; with cardboard tubes an integral part of its design.

Adding interest, some historic buildings that survived the quake like the Heritage Hotel on Cathedral Square, have been painstakingly restored by skilled craftsmen. Set in the grand 102-year-old Government building of Italian Renaissance Palazzo style, the Hotel has retained its olde world charm, while others now have a modern element.

In February 2016, the Centre of Contemporary Art opened its doors once again, with its opening exhibition Precarious Balance on until May 2016 and featuring work from national and international artists exploring materials and objects of fragility, balance, tension and the process. The Christchurch Art Gallery, one of the city’s new significant modern buildings also recently reopened to a massive exhibition, some familiar pieces joined by more than 400 new works. Its exterior is lit with major neon work by Martin Creed.
Good shopping has been kept alive thanks to the inventive pop up container mall that sprang up in 2011, the retailers operating from within old shipping containers are relocating back into the city centre. A favourite strip is the cherished New Regent Street with speciality shops constructed in the 1930s remaining virtually undamaged. There is a trend in Christchurch and nationally to purchase eatables from the local farmers’ markets.

Bars, restaurants and cafés selling great coffees have made a heart-warming resurgence, the number now well exceeds those existing pre-quake. C1 Espresso in a 1930s bank building, Supreme Supreme in an artfully reworked former Chinese restaurant and The Smash Palace are popular.

Over the hill in Lyttelton, Roots has been named this year’s Restaurant of the Year in the Cuisine NZ Good Food Awards. “Roots has a fantastic focus on sustainability and localism,” said Cuisine editor Sarah Nicholson. Pescatore is another award-winning fine dining experience in Christchurch city featuring the best of local land and sea produce.
Hot in the wine scene in Waipara Valley, North Canterbury,  is family-run Black Estate, producing pinot noir, chardonnay and riesling and within the same region Pegasus Bay continues to produce fine wines and good food in an idyllic setting. 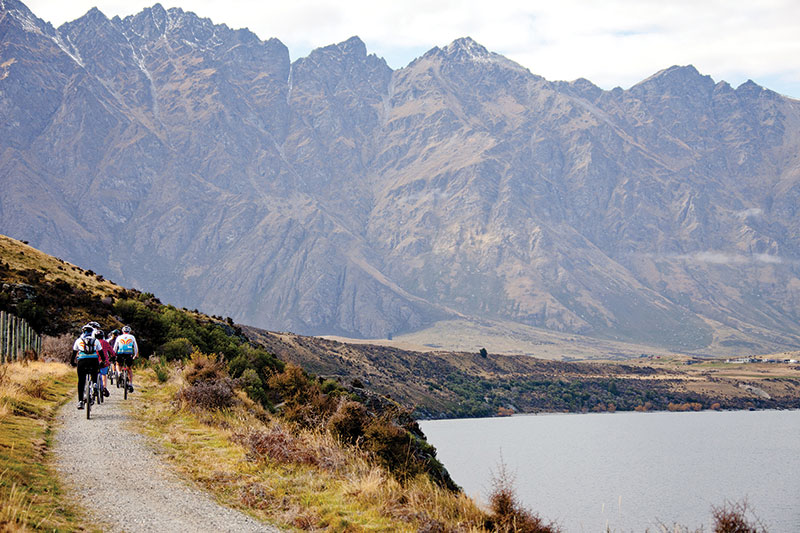 Amisfield Winery & Bistro, 20 minutes’ drive from Queenstown overlooking Lake Hayes, has just launched exclusive private tours of their vineyard and The Rees Hotel continues to impress with its True South Culinary Series Dinners, partnering with winemakers for degustation menus utilising the best of Central Otago’s produce.
Adventure is synonymous with Queenstown, the birthplace of bungy jumping and the ever-popular jet boating, there’s now a new toy in town, jet boarding – a jet propelled surfboard capable of speeds up to 57 kilometres an hour. If getting wet doesn’t appeal, try Black guided art tours to meet local artists and galleries. 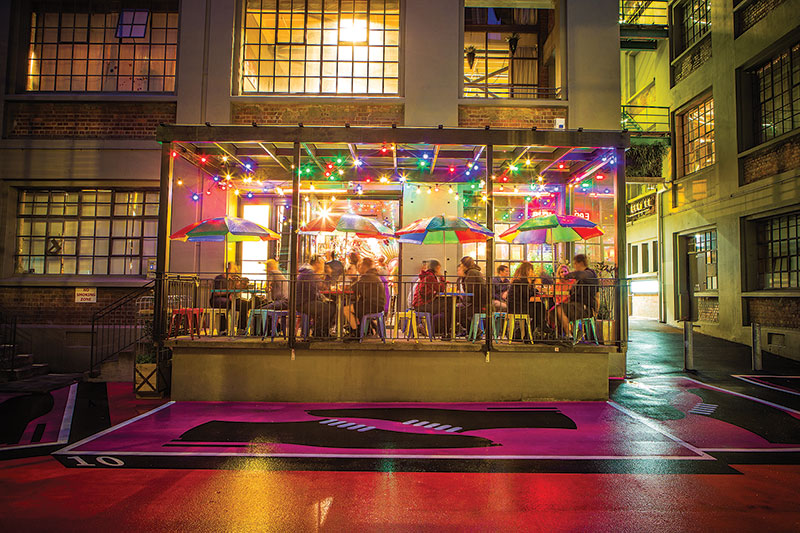 Shoot the breeze in Wellington

In the capital Wellington, its geographically compact city centre makes it easy to get about on foot. High-end fashion shops are easily found as well as good places to eat. A notable new addition is Egmont Street Eatery, focusing on simple cuisine with local produce and, Hanging Ditch, a new cocktail bar, both found in the boutique culinary enclave Hannah’s Laneway Commons. The lane is a hit, dubbed ‘Little Portland’ as it’s a culinary hub to bakers, roasters, grinders, brewers, pizza makers and soda crafters.
Brewers have been opening throughout the country, Garage Project’s new bar across the road from the brewery is GP 91 Aro where there are an impressive 20 beers on tap. Popular in Christchurch is Three Boys Brewery, in Auckland there’s Hallertau, and Emersons in Dunedin.

The Wellington Zoo has recently expanded and one of its newest features “Meet the Locals” celebrates the country’s diverse flora and fauna.
The Lord of the Rings director Sir Peter Jackson and his creative team at WingNut Films have created a sobering World War One experience in Wellington’s Dominion Museum. Taking visitors on a journey through the hardship and horror of the battlefields, The Great Trench Experience opening in April 2016, promises to be a chilling, multi-sensory experience. 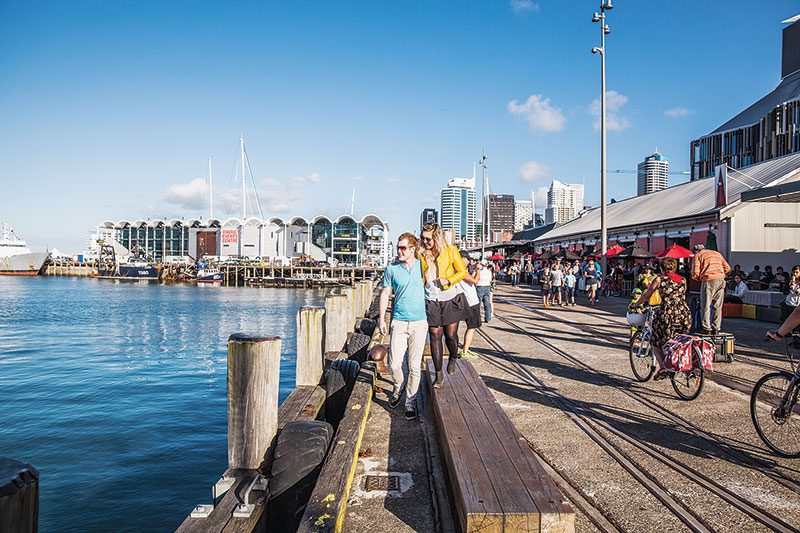 The City of Sails, Auckland, the country’s biggest, fastest moving city, sits between two oceans. In the heart of the city its waterfront is a vibrant place as folk stroll or cycle along a promenade linking the Viaduct, Wynyard Quarter and North Wharf to Silo Park. It is teeming with bars, eateries featuring seafood and entertainment. This precinct is also home to the new Adina Apartment Hotel Auckland which opened last year.

New is Rockefellers Oyster Bar, featuring raw oysters from all over New Zealand and ten minutes away is Ponsonby Road, a concentration of high fashion designer labels combined with Ponsonby Central burgeoning with chic cafés and eateries. Fine dining sees Auckland central restaurants The Grove, The French Café, Sidart and Kazuya named in La Liste among the world’s top 100 eateries. Miann, a brand new dessert restaurant on Fort Street in the city is also irresistible.
Beyond the city’s waterfront, sailing, kayaking, jet boating and fishing are enjoyed in the Hauraki Gulf, home to more than 50 islands and five marine reserves. Among them is Waiheke Island, a 35-minute ferry ride from downtown Auckland. It was recently named the island ‘best in travel’ for 2016 by Lonely Planet and for good reason. White sandy beaches, coves, vineyards, cafés, fine dining and fishing – the island has all the essentials.

Auckland Seaplanes fly and fish within the Hauraki Gulf and for a secluded island escape, Kawau Lodge offers a boutique stay with friendly owners Helen and Dave. Without roads it is bliss, the only sounds are lapping water, birds and boaties. Dave takes boat rides around Kawau Island visiting places like stately Mansion House, as well as tours to other nearby islands.
Further north in Tutukaka Coast, opening in 2016 is luxury accommodation at Helena Bay, exclusive lodges set on  350 hectares of land including three kilometres of pristine coastline and four private beaches. There is a new glamping option in Northland just south of Kauri Cliffs with Magic Cottage at Takou River, and 45 minutes south of Auckland,  Te Hihi Estate, is rural luxury accommodation.

To try to counter balance all this fabulous eating, leisure cycling is now a big deal. Trail rides appear along old railway lines, pioneer trails and vineyards linking riders to some of the country’s most scenic places. There are 23 new Great Rides throughout the entire country, and with bike hire options, shuttles and hospitality galore it’s the hot new way to see the stunning scenery that’s always existed, just from a different angle and pace. •

Air New Zealand is New Zealand’s largest domestic airline and flies to and from Australia. airnewzealand.co.nz