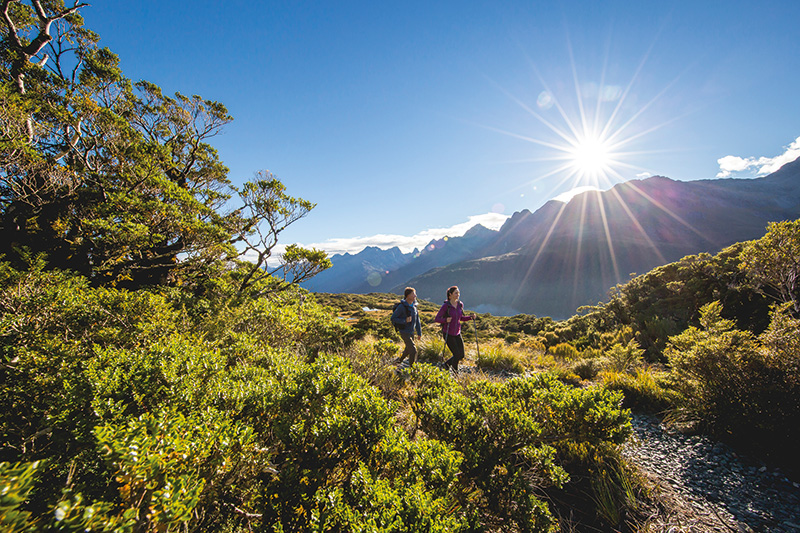 In 1908, a London newspaper described New Zealand’s Milford Track as the ‘finest walk in the world’. Hike it and it’s not hard to see how the accolade has stuck like an honorific for more than a century.

This most famous of Kiwi tracks follows mountain streams so clear that trout seem to hover rather than swim. It climbs to barren alpine heights atop Mackinnon Pass, and then descends to the foot of New Zealand’s highest waterfall and the shores of stunning Milford Sound.

For all that, however, there are many hikers who say there’s an even better walk just down the highway at the Routeburn Track, which takes a higher and more exposed course through the mountains. But maybe it’s not a case of one track being better than the other; perhaps it’s simply that they’re both among the finest walks in the world.

The Southland town of Te Anau is the springboard to the Milford Track, with ferries departing from nearby Te Anau Downs to the start of the walk at the northern tip of Lake Te Anau. From here, 53 kilometres of hiking stretches out for four days through wet and wild Fiordland National Park. 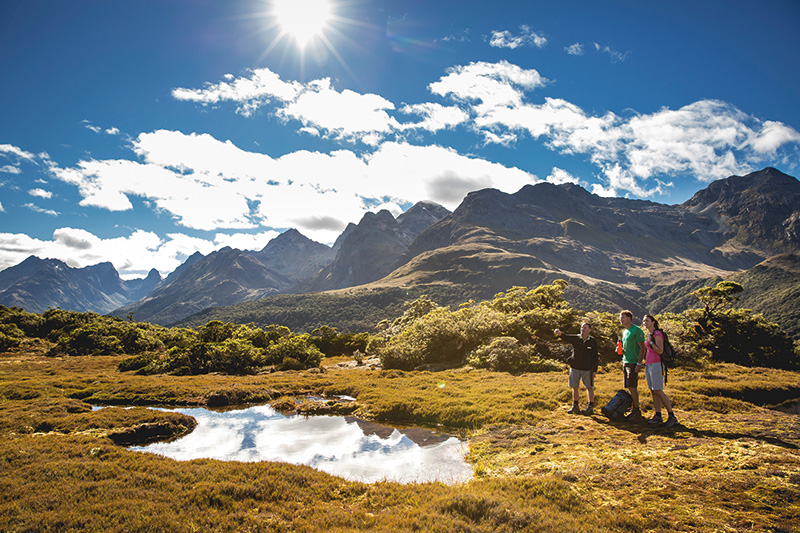 The track begins gently, in both effort and scenery, following the course of the Clinton River as it runs shallow and clear through the beech forest that crowds its banks. As the track and river wind deeper into the mountains, the landscape becomes ever more dramatic. Mountain walls rise almost Yosemite-like from the river’s banks, and the valley begins to narrow almost to a close. Cliffs still scratched and scarred by ancient glaciers tower overhead as the track funnels into the Clinton Canyon.

In here, the cliffs are so steep, and conditions get so perilous through winter, that the valley is striped with avalanches – it’s said that there are more than 50 avalanche paths along the course of the Milford Track, though it’s all very safe during the hiking season.

The track’s only significant climb, and its most spectacular section, begins just before Mintaro Hut (the second night’s stop for independent hikers), rising steeply up to Mackinnon Pass. It’s a 400-metre climb that ends in heady style – atop a long, tarn-dotted strip of alpine land strung between dramatic peaks.

If you set out early enough on a fine day, the pass offers the prospect of memorable views over valleys packed thick with morning cloud, but on a wild day, which are pretty common here, it can be an education in the power of mountain weather. 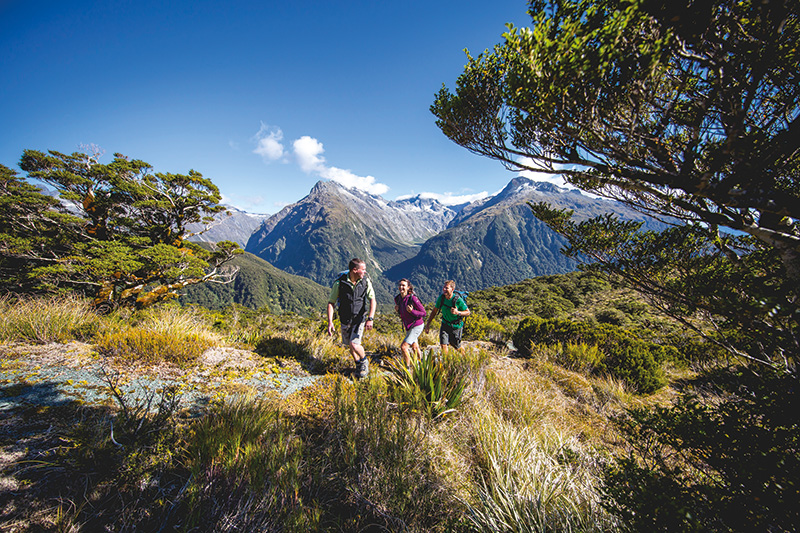 As you relax and regather in the shelter that sits atop the pass, consider the fact that over the 130-year life of the Milford Track, four previous incarnations of this building have been destroyed by brutal weather. Mackinnon Pass is that wild.

From the pass, the Milford Track descends into the Arthur Valley, which it follows all the way to the shores of Milford Sound. On this side of the pass, you’re entering one of New Zealand’s wettest areas – Milford Sound averages around 6.4 metres of rain a year – a fact that readily shows itself in the landscape.

At times, moss grows as thick as lawn across the rainforest floor and tree trunks and, near the point where the track flattens out again, there’s a side trail branching away to the base of Sutherland Falls.

When these awe-inspiring, 580-metre-high falls, which skid down cliffs below a high alpine lake, were discovered in 1880 they were thought to be the highest in the world. It was the subsequent interest in viewing the falls that led to the creation of the Milford Track. It’s about a 90-minute detour to hike to the falls, but to not see them is to miss a vital part of the Milford Track story. 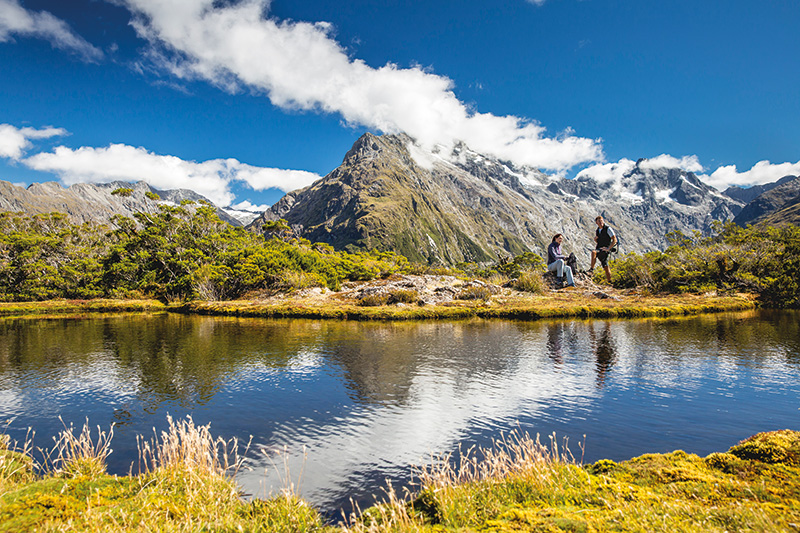 The power of nature continues as a theme through the Arthur Valley. At Bell Rock, the insides of a boulder have been scoured out by relentless water action, and everywhere there are cascades and low waterfalls churning their way towards Milford Sound.

In a direct line, less than 25 kilometres separates the Routeburn Track from the Milford Track, though in this convoluted mountain landscape it’s about a five-hour drive from the end of the latter to the start of the former, just outside of Glenorchy.

The Routeburn Track offers three days and 32 kilometres of mountain magnificence. It begins at around 400 metres above sea level, and ascends another 800 metres to its high point at Harris Saddle, which stands almost 200 metres higher than Mackinnon Pass. 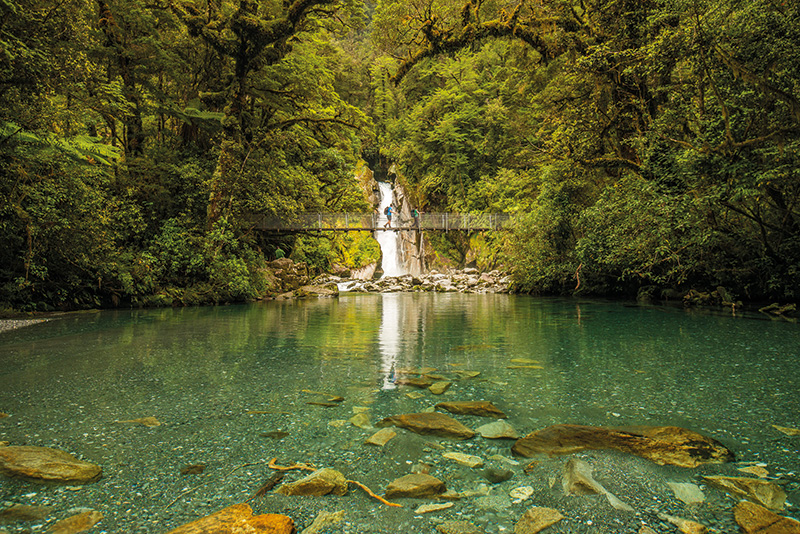 The walk begins as dramatically as it intends to continue, pushing through beech forest and tall ferns along the Routeburn Gorge on a section of trail that’s reminiscent of the Arthur Valley at the Milford Track’s end.

There the comparisons end. After the first night’s stop beside Routeburn Falls, where huts peer out over the butter-yellow Routeburn Flats far below, the track climbs towards Harris Saddle. For most hikers, this is where the pleasures truly begin.

Just below the saddle, the track almost hangs above the shores of Lake Harris in a scene as dramatic as anything in higher ranges such as the Andes or Alps. The pleasure is doubled – literally – if you make it here on a still morning, when the lake can become a mirror image of the bare summits around it.

Harris Saddle is the starting gun on one of the most thrilling sections of walking in New Zealand. For much of the next eight kilometres to Lake Mackenzie, the track cuts across the Hollyford Face, running high above the tree line so that nothing impedes the view. 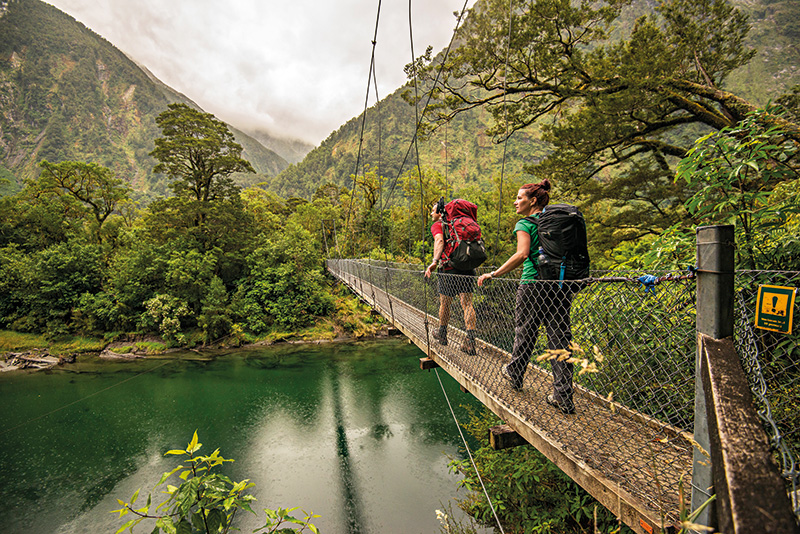 The Hollyford Valley (itself the site of another popular hike, the Hollyford Track) is scooped out below, with the Darran Mountains rising out of the valley to the tip of Mt Tutoko, the highest peak in Fiordland National Park.

Another highlight of this high traverse is the emerald-green Lake Mackenzie. Pooled beneath high summits, it creates a classically alpine scene cut straight from a chocolate box. On its shores are huts for both independent hikers and private guided walkers.

The public hut – as with all such public huts along both the Milford and Routeburn – contains bunks with mattresses, gas stoves and solar lighting, cutting back on what you need to carry (no tents, sleeping mats or camp stoves needed). The private lodges bring the promise of hot showers, comfy beds and three-course hosted dinners with wine or beer.

Tips
For independent hikers, permits are required to walk both the Milford Track and Routeburn Track from late October to late April. Camping isn’t allowed along the Milford Track, but there are two campsites on the Routeburn Track. Both walks can book out months in advance, so plan ahead. Bookings can be made at booking.doc.govt.nz, while track information, including transport options, can be found at doc.govt.nz

Tour operators
Ultimate Hikes operates guided walks across both tracks, staying in its private lodges. ultimatehikes.co.nz
Outdoor Travel has a huge range of outdoor adventures including walking tours on the Milford Track and Routeburn Track. outdoortravel.com.au Active Adventures New Zealand offers a range of adventure tours including the Manuka, a combination tour that includes the Routeburn, Milford, and Kepler Tracks in Fiordland National Park. activenewzealand.com