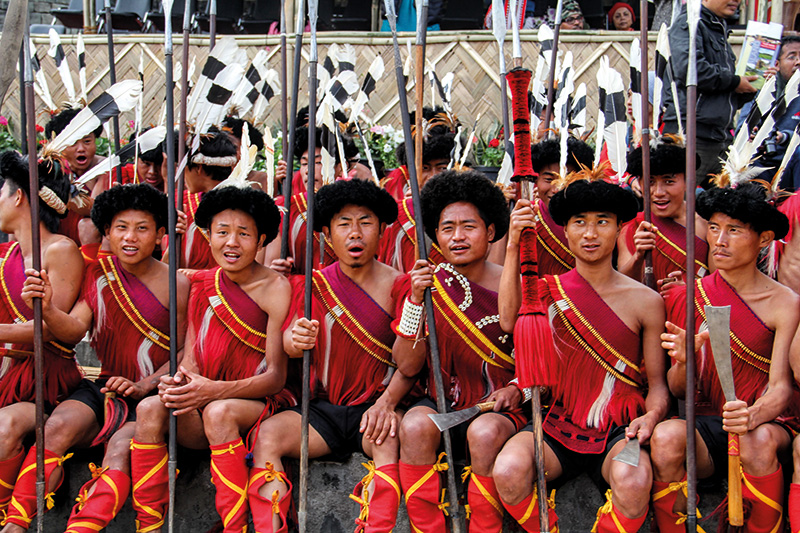 The rhythmic and lilting chanting of the Ao tribes, resplendent in their intricately-woven shawls with traditional motifs signifying bravery and courage, reverberates in the air like digital surround sound. The Angami Naga men stand out with the headdress that they sport – a giant structure that radiates outwards like cheery sunbeams, fashioned out of bamboo strips and cords of white cotton, topped with hornbill feathers. It’s hard not to be awed by the multi-coloured spears, helmets with red tassels, headdresses with boar’s tusks, cowrie shell belts, cane rings on legs, ivory armlets, and tribal regalia of feathers and bones with reams of coloured beads. The beating of log drums and a strident war cry echoes among the hills as the participants in their tribe’s colourful traditional attire march into the stadium, announcing the opening ceremony.

Nagaland, one of India’s smallest north eastern states, was formed in 1963 and is home to some 16 different tribes, tucked away between Tibet and Myanmar. It feels like stepping into a time machine – we have careened around tortuous roads and craggy mountains overlooking paddy fields and pineapple plantations to reach here. Not so long ago this used to be an esoteric world of feathered and beaded, opium sucking head hunters living in magnificent hilltop villages. This remote land used to be the haunt of fierce warriors, and then for years was torn by Naga independence movements and guerilla army’s insurgency. Today, after a peace accord and ceasefire, serenity reigns across the mountains and valleys.

I am here for the 10-day cultural extravaganza called the Hornbill Festival, which is held in December every year at the Kisama Heritage Village just outside Kohima, the state capital. The Festival is a tribute to the hornbill, a bird that is rarely seen today, but shows up regularly in the tribal folklore, song and dance of the state. All 16 tribes, like the Angamis, Chakesangs, Changs, Konyaks and the Pochurys, speak different dialects and have distinct customs and styles of cooking. The Hornbill Festival is a way to promote solidarity and showcase the tribes under one roof, as well as open up this hitherto insular state, to the world. It also serves as a way to reinforce their rich heritage to the increasingly modernised younger generation, who listen to K- pop and sport spiffy hairstyles, and helps them appreciate their culture. 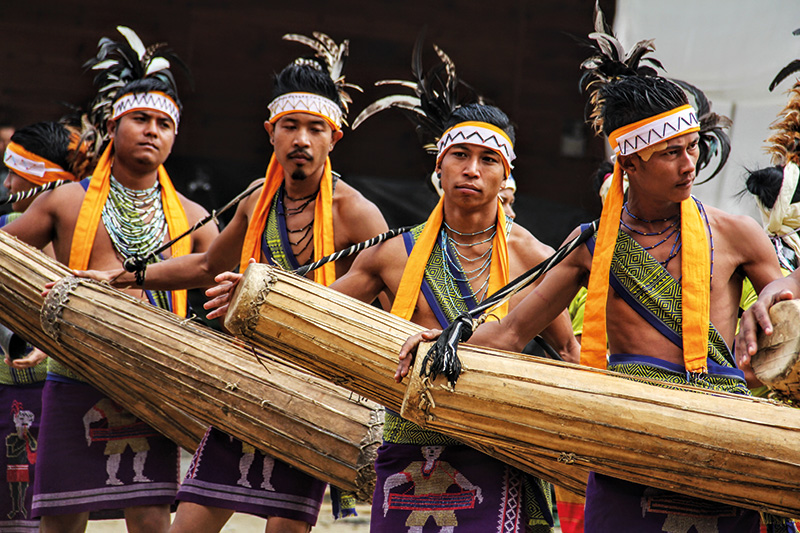 I watch the Sangtam tribal women (who are believed to have originally come from Myanmar) dressed in pristine white skirts and matching head cloths, their rich orange and yellow beaded necklaces creating a vivid effect as they dance to their harvest song. Konyak males stride with their distinctive facial tattoos which were earned for taking an enemy’s headwear and necklaces with bronze faces, reflecting the number of heads they had taken as a rite of passage. It was after the Christian Baptist missionaries arrived here that the Nagas buried their weapons and gave up headhunting; today most Nagas are Christians and the biggest buildings in these ramshackle towns are their churches.

It’s easy to go camera-crazy trying to capture all the mesmerising colour and the exuberant atmosphere of this visual feast with its kaleidoscopic scenes. Regal tribal men in their majestic costumes and the women who stand out with layers of beaded necklaces, headbands with bright red tassels, intricately woven panels of cloth worn as skirts and aprons, and rows of bracelets. The Yimchungru tribe, wearing red hats and loincloths, dance in circles around the dusty grounds and slice the air with ceremonial swords. “As the history of the Nagas has never been officially recorded in writing, their dances and songs serve to pass on stories of valour and victory,” explains Zabu, my local guide.

The most exciting part of my visit is that I am seeing the Festival through a glamorous launch pad – the Kohima Camp, Nagaland, introduced by The Ultimate Travelling Camp, which coincides with the 10-day Hornbill Festival. It’s a luxury camp that pitches tents in the midst of a jungle clearing, with the Japfu Range as the backdrop, reached by a bumpy road from Kohima. With four-poster beds piled high with cushions, gauzy mosquito nets, leather chairs and cupboards, and freshly baked bread and gourmet fare, it is definitely glamping at its best. I even have my own man Friday, a valet who manages my schedule and brings me coffee in bed for the early morning wake up calls. 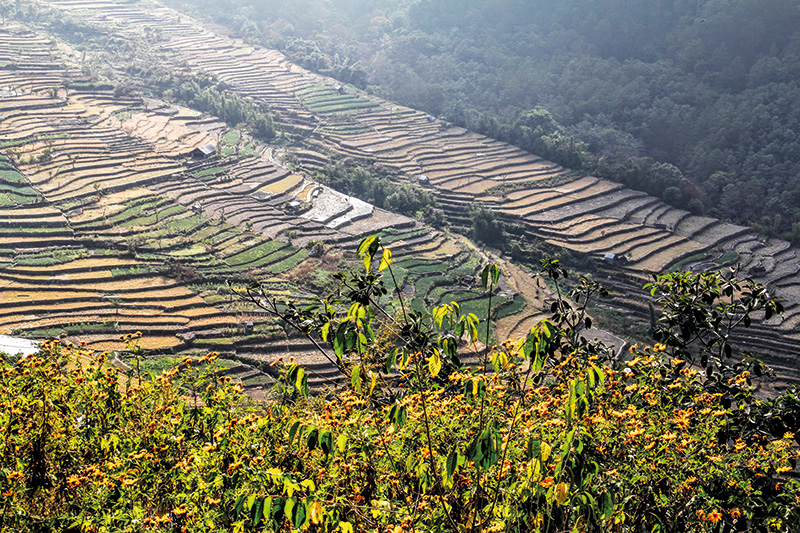 The Festival is not only about music and dance, it is a great way to get up close with the different tribes as well as partake in their culture, and witness fun-filled competitions like a greased pole climbing. Muscled men stripped to their underwear, labour their way up slippery bamboo poles greased with pork fat and upon finally reaching the top, coated in sweat and sand, shout victoriously. There are archery and traditional wrestling bouts as well as an indigenous rice feeding game.

In the breaks in between the cultural performances, I walk up to the longhouses called morungs, crafted out of teak wood and cane, with traditional motifs of animals and birds carved on logs. Morungs have been traditionally the recreation clubs of the village, and are also a place where elders impart training to the younger generations in traditional skills, also functioning as a guard house against intruders. It is in the morung where the boys learn the ancestral folksongs, where decisions of war and peace are taken. What draws in visitors is the remarkable re-creation of traditional tribal life here – they are to complement each participating tribal group. There is a restaurant at every morung that serves delicacies typical to that tribe. As I wander through the morungs, I see tribal men with blackened teeth and fierce tattoos, crouch around bonfires with their bamboo cups of rice beer trying to keep warm. Dance troupes relax over cauldrons of hot black tea and smoke pipes in the winter chill. It’s not all time warp – they whip out their mobile phones from their dresses and want to take a selfie with me!

A lot of the festival is of course about food. There is a popular joke in Nagaland that goes – “If you see a man walking along with a dog, he could be a vegetarian!” The harsh way of life up here means that the Nagas are accustomed to eating almost everything, whether it is frog, dog or rat. At the Chakhesang morung, visitors are invited to partake in a typical meal comprising delicious fried silkworm larvae, frogs, and other local foods. Other tribal kitchens also serve typical dishes such as pork or river fish boiled with fermented bamboo shoots. The favourite local tipple is sour home-brewed rice beer called zutho, served in bamboo mugs. I share a cup of vile black tea, from a kettle hanging over a fire that has been boiling for hours, with a member of the Konyak tribe with black teeth and tattoos – they were the original headhunters. 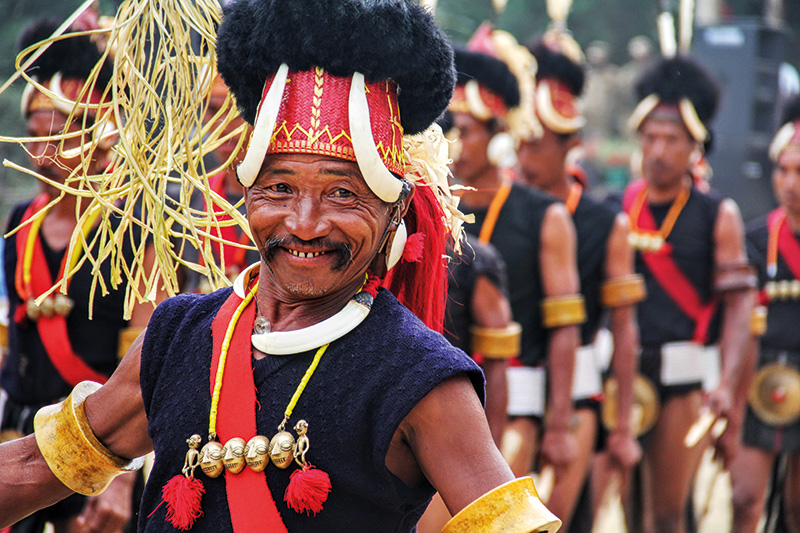 The festival also enables the Nagas to showcase their handicrafts. There are strings of coloured beads, carvings, intricately woven baskets, dried flowers, bamboo containers and even animal horns used for drinking and hornbill feathers offered for sale in a handicrafts complex next to the amphitheatre. The Nagas also have a great relationship with music; this has been one of their integral oral traditions used for passing on stories from generation to generation. Many of their folk songs are inspired by nature, agriculture and fertility. But modernity has cast its shadow. Every evening, the air resounds with the electrifying rhythms of local and international rock bands that compete in a contest with considerable prize money at stake.

The last day of the Festival starts with a ‘Unity March’ with all the participating tribes walking together around the amphitheatre, with their hands linked. The last day is also the day of funfests like the bamboo stilt walking competition practiced by men folk, which is usually done by them during their harvest time. The most popular of all events is the Naga King chilli eating competition – in two categories – for locals and the travellers. Raja Mirchi is one of the hottest chillies in the world and is guaranteed to burn. Each contestant is given loads of red and green king chillies in a bowl and milk powder in another bowl. Ambulances wait ready to ferry the contestants to the hospital in case they need a stomach wash.

Experienced contestants start chomping chillies like they were eating candy. Some of them turn red in the face, others throw up, while a few maintain their composure, drinking bottles of water. A Belgian tourist is brave (and foolish) enough to take up the dare for visitors. He turns ruddy in a couple of minutes and receives medical treatment. 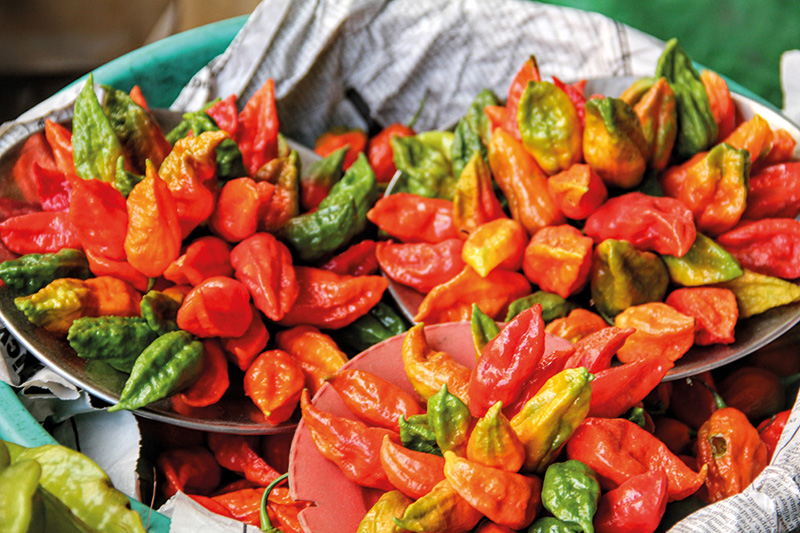 As the sun dips over the hills and the skies fill with the war cries of the tribes, we huddle in our shawls in the amphitheatre. The closing ceremony starts with a bonfire lit by Miss Nagaland. Soon, the tribes start prancing around in lively steps and invite the guests to shake a leg with them. As I watch the different tribes and attempt to match their moves, the past ten days which have been a crash course in Naga culture for me, seem like a surreal dream. What strikes me is the fact that the Nagas still live close to nature, and care for the planet; they still have time to talk to strangers and stand and stare. I pray that the Festival goes on without disturbing this fragile homeland too much. Its traditions, its customs and colourful attire make it one of the most beautiful festivals that I have ever witnessed. •

Getting there
• Air India flies daily to Delhi from Sydney and Melbourne. These are the only direct flights from Australia. airindia.com
• Fly Indigo to Kolkata and connect to Dimapur. From there the Kohima Camp will pick you up. goindigo.in

Where to stay
The Ultimate Travelling Camp’s Kohima Camp, Nagaland luxury camp is pitched for the Festival and offers glamping at its best. It offers two- three-, four- and five-night itineraries on an all-inclusive basis.
tutc.com/kohima-camp-nagaland

What to do
The Hornbill Festival takes place in December with this year’s festival running from 1–7 December. Besides the Festival, visit the Kohima War Cemetery, see the village of Khonoma, climb the Japfu peak, and visit the Naga market for a window into local meat and delicacies.

What to buy
Bamboo baskets, beaded and bone jewellery, and woven tribal shawls. 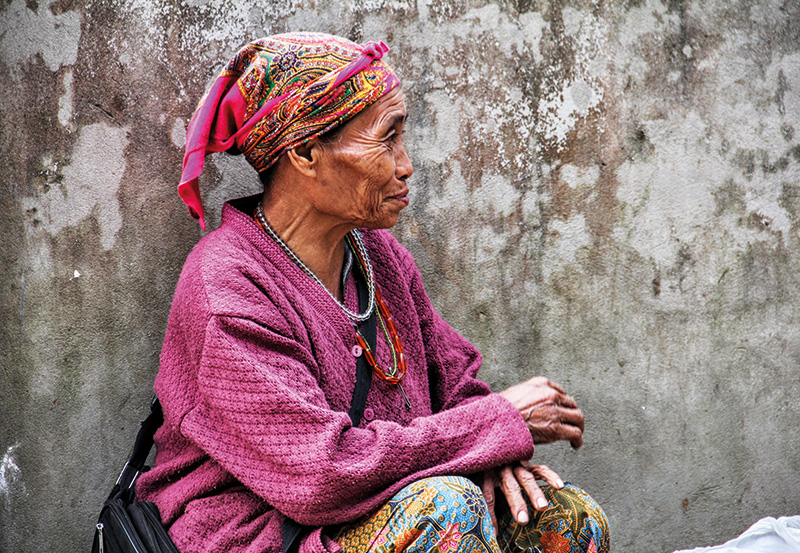