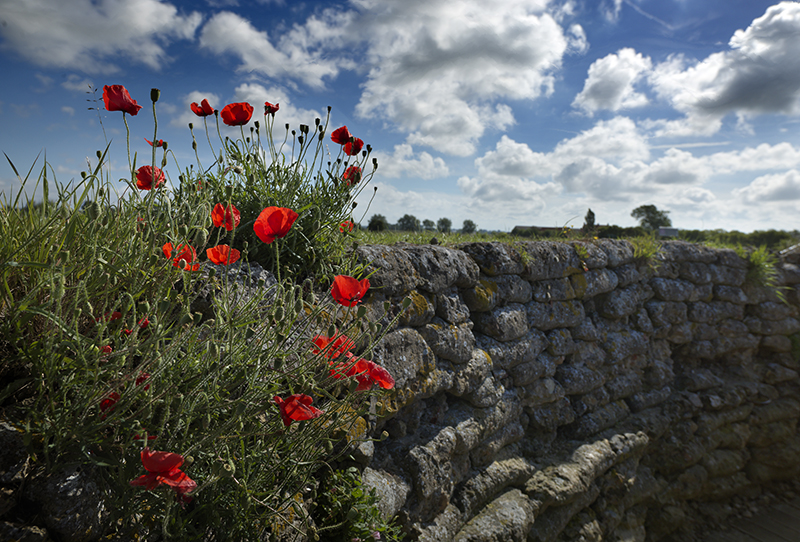 As we remember the horrendous battles of 1917, visitors to the Western Front are on the increase, particularly with the coming of the warmer months of summer. But what happened so long ago to take people off to these far-off places and remember events so long ago?

1916 had been a disastrous year for the Australians, their first involvement on the Western Front after travelling from Egypt. The freezing winter of 1916-1917 had virtually closed down hostilities with men fighting to survive the icy, cold weather rather than the Germans. 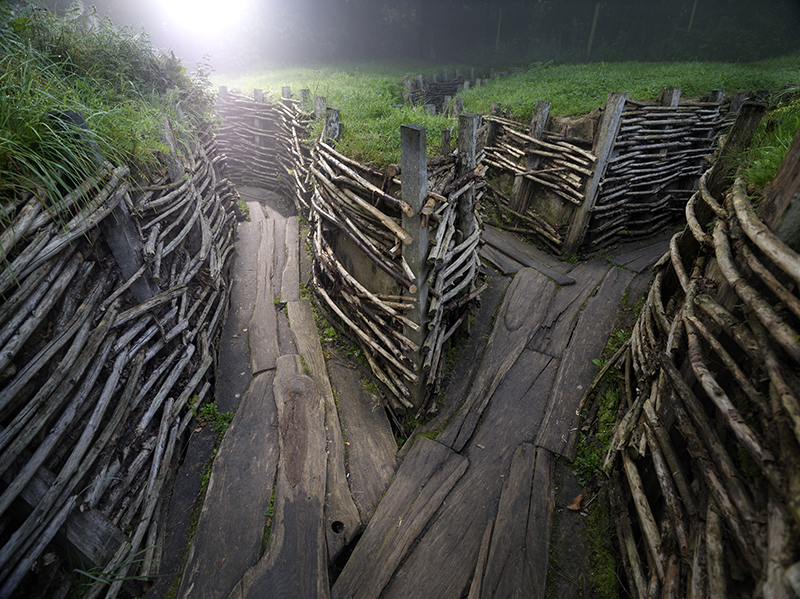 Now 1917 was upon them, the war was far from over and Australia far away. It would not be a good year for the Anzacs. In late February 1917, the Germans made the strategic withdrawal to the Hindenburg Line, in places 20-30 kilometres to the rear. This reduced their frontline, but also created a formidable defensive line for the allies to assault and capture.

One hundred years later, 2017 is for those with a relative or a historic interest in the Great War, an ideal time to travel and visit the battlefields of France and Belgium and vividly see where the Australians fought and suffered. 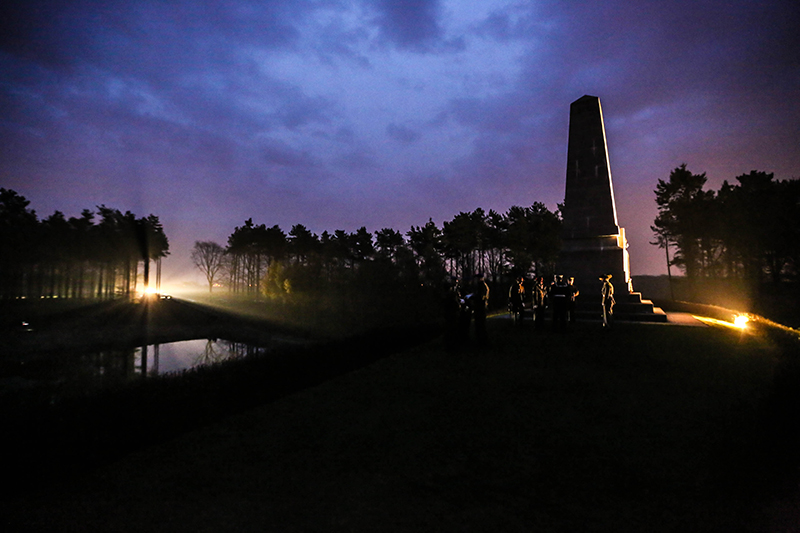 Images of the Great War come down to us in those stark black and white photos of dead horses, up-turned wagons, shattered trees and dead men. Naturally, the landscape today shows no signs of that horrendous conflict. Instead, the trench lines and the land once churned to quagmire by incessant bombardment, are now green, neatly farmed fields between quaint villages rebuilt long ago. But you can still find remnants of the war in preserved sections of trenches, artillery, rusting helmets, shell shards, cemeteries, memorials and numerous museums.

For those interested in travelling to the Western Front, where should you go and what should you think about? Let’s consider the history and the places pertinent to travel and commemorative events for 2017.

If you are considering visiting the Western Front, you need to consider two things. First, there is no public transport available to remote battlefields and cemeteries. You therefore need a car. You can hire a car from Avis in Paris or at Charles de Gaulle Airport (CDG). However, I suggest getting the train from Gare de Nord to Amiens or Arras and hiring a car at the station. 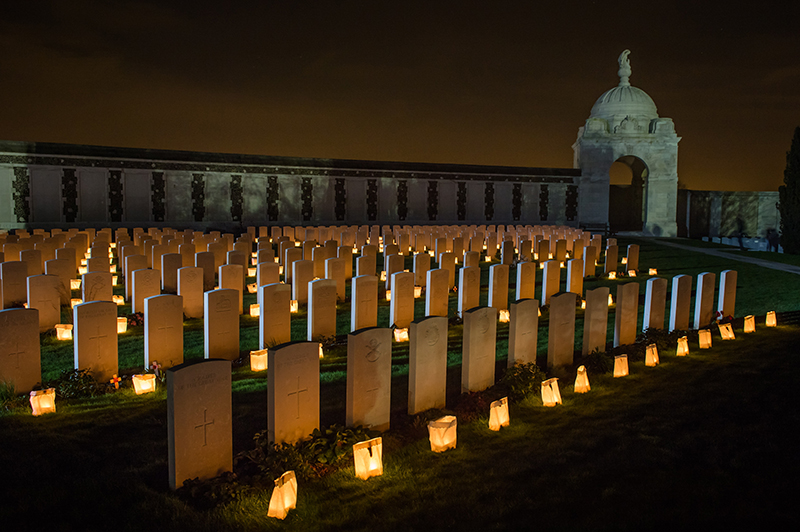 The second is, you need a historian or guide, someone to show you the battlefields, where actions happened, where the frontline trenches were and where the attacks went in. If like me on my first visit in 1994, you turn up with a map and a guide book only, it is very hard to understand what you are seeing and what happened in those waving fields of wheat or sugar beet. I have listed some knowledgeable local guides below.

The Australian operational areas are in two relatively small areas. The southern area along the Somme is contained in a triangle from Amiens in the west, then eastwards to Péronne, north to Bullecourt and back via Bapaume, Pozieres, and Albert, to Amiens. A second separate area is a further 175 kilometres to the north around Ypres.

For the Australian visitor, these are the two areas to concentrate on. If you are going during 2017, the places to visit are those which have their centenary during the year such as Bullecourt, Messines, Menin Road, Polygon Wood, Zonnebeke, Broodseinde and Passchendaele. 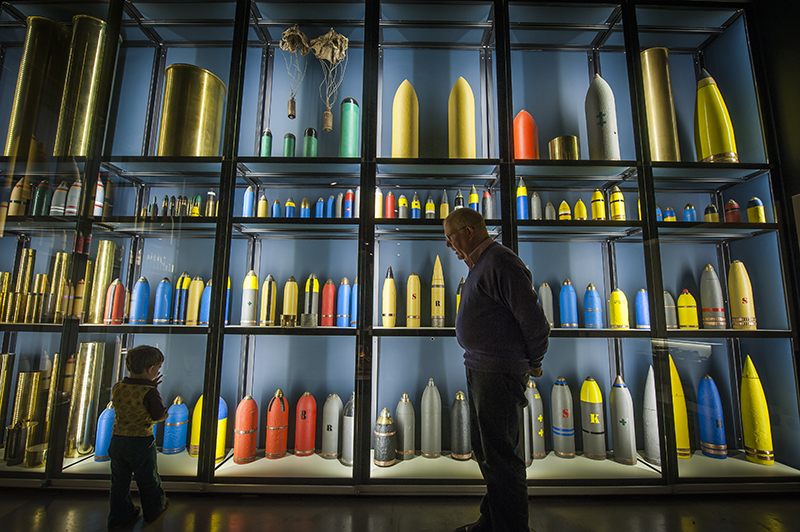 The Somme and Bullecourt

The main Australian action in early 1917 was around Gueudecourt and Flers on the Somme. From here and following the German withdrawal, the Australians fought their way through Bapaume and the outpost villages, only to be confronted with the bastion of the German line at Bullecourt.

It was here during April and May 1917 that the Anzacs fought two disastrous battles. In the first, they threw themselves against the highly-defended Hindenburg Line with little support and, after the failure of the tanks, had 3,000 casualties in one day, including 1,170 taken prisoner. 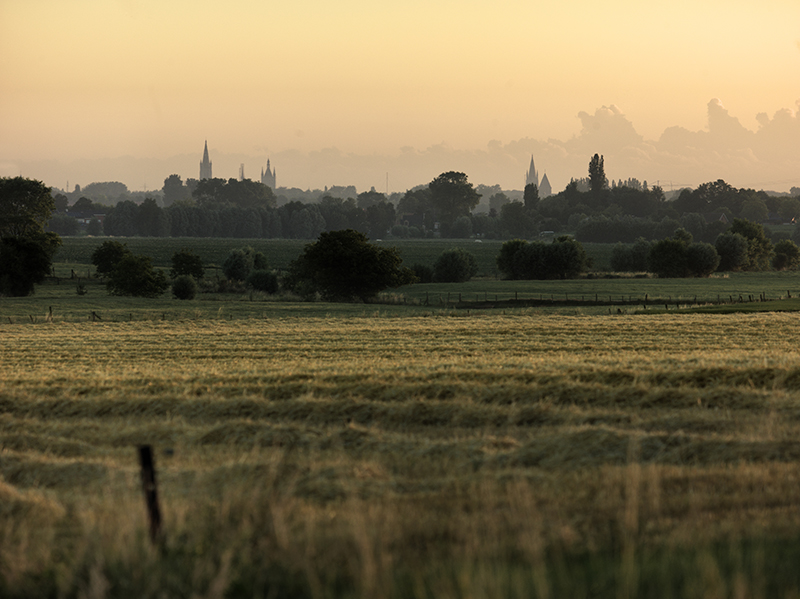 They tried again between 3–17 May, again to be beaten back with 7,500 casualties. Today this battlefield remains exactly as it was, accepting of course that the trenches and barbed wire are long gone and the villages of Bullecourt and Riencourt rebuilt. But you can still see the railway embankment and the sunken road where the attacking battalions formed up and the vast battlefield just as it was (but without snow) in April and May 1917.

Messines
In June 1917, the action shifted to the north and the Messines ridge, a sickled shape line of low hills that went from Messines in the south to Passchendaele in the north. On the 7th June, the British fired nineteen massive mines under the German lines, breaking through on a 16-kilometre front. The Australians were part of this massive offensive, at the southern end of the line at Messines along with the New Zealanders. The remains of German blockhouses still litter the fields where the bodies of Australian dead still lie. 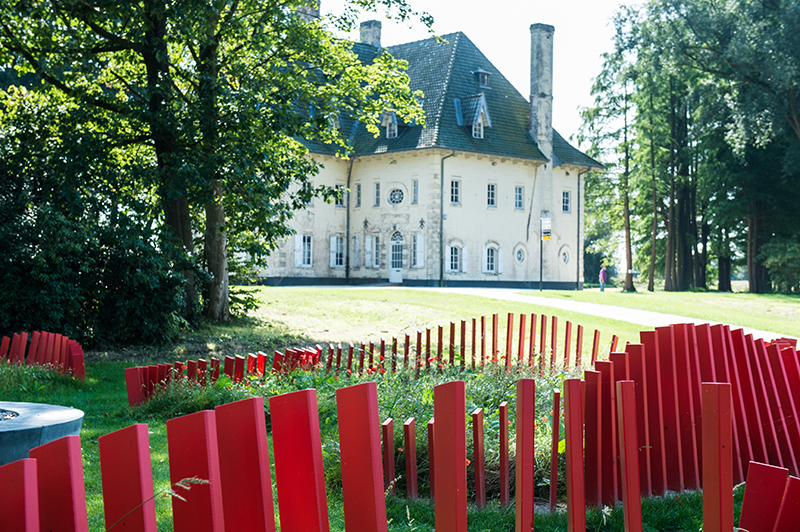 Hill 60
Just to the north, the notorious Hill 60 where the Anzac tunnellers fired two mines, the craters still there today and well worth a visit. For those who might have seen the film, Beneath Hill 60 or read my book, this is the very place where this frightening underground war was waged. Here the Australians pushed a muddy tunnel 100 metres under the German frontline, 30 metres down in the grey-blue clay, far below where the German counter-mining efforts were focused. Today, the shattered remains of Hill 60 can be visited, a memorial site still showing evidence of the mine craters and the German concrete pillboxes that were up-turned by the explosion.

The Menin Road
After Messines, the fighting moved northeast, first to the infamous Menin Road. At the Ypres end was Hellfire Corner, at one time considered the most dangerous place on earth where horses were galloped through and men ran to get well past this dangerous intersection, now an unpretentious roundabout. Along this road, the Australians were subjected to the first mustard gas attack, but were able to push northwards to Glencorse and Polygon Woods. 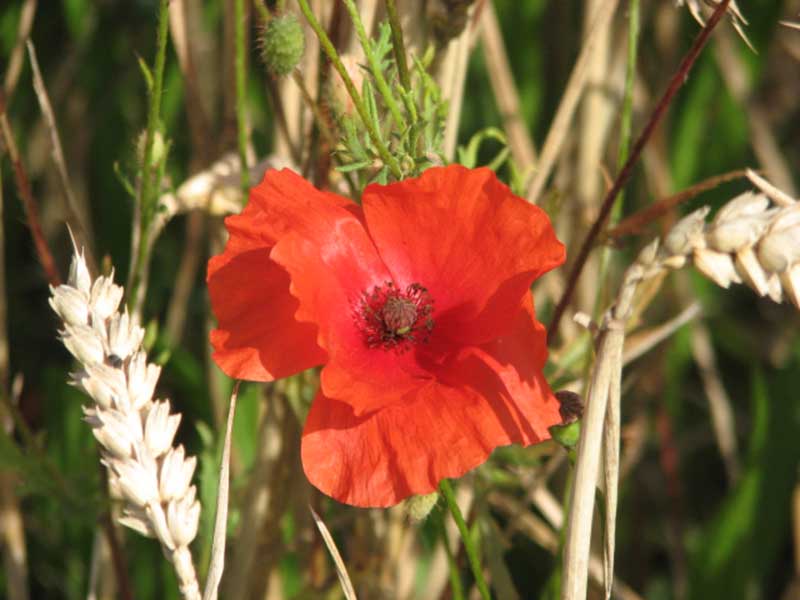 Hooge
Rarely visited but very accessible are the remains of old trenches at Hooge, just a couple of kilometres along the Menin Road. It was here that the first German flame throwers were used and again the results of British mining can be seen in the small lake by the hotel. Behind this and now consumed in a fun park, is Chateau Wood, made famous by the Frank Hurley photographs from 1917.

Polygon Wood
On 26 September 1917, the Australians attacked at Polygon Wood, taking their objective by mid-morning. Here, the 5th Division (AIF) Memorial looks across Buttes New British Cemetery where the graves of five recently discovered Australians lie together and where a walk into the forest brings you to the German blockhouse known as Scott’s Post. 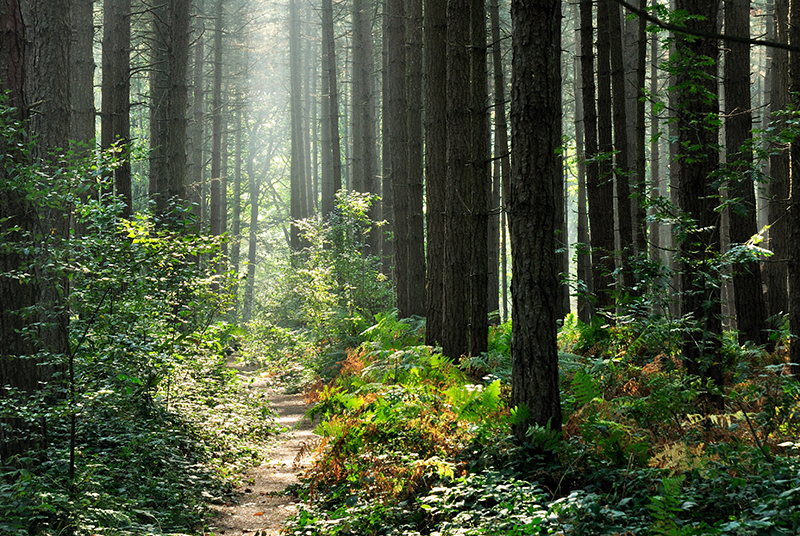 While in the area, you must stop at the Diggers Rest, a café-bar owned by Johan Vandewalle, a man keen to meet Australians and tell of their gallant deeds in taking Polygon Wood. He can be found at the far end of the wood, down the road past the 5th Division Memorial where a salad sandwich with homemade paté and a cold Belgium beer lift your spirits.

Passchendaele
From Polygon Wood, the Australians fought up the sloping ground, first to Zonnebeke where the extensive Passchendaele Museum is now open to the public. Then on to Broodseinde, where a visit to the Tyne Cot Cemetery is a must. This is the largest Commonwealth War Graves cemetery with 11,961 graves, 8,373 unknown. Here lie 1,369 Australians including two Victoria Cross recipients, Sergeant Lewis McGee and Captain Charles Jeffries. 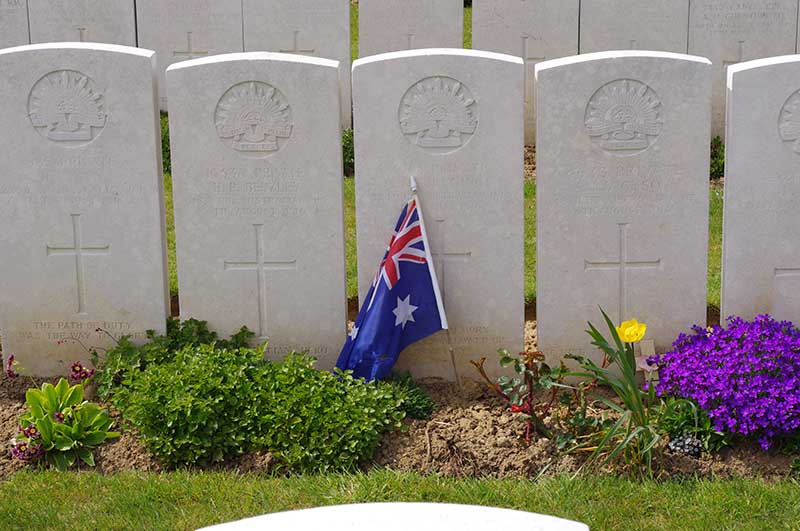 Continuing up the road, you arrive at Passchendaele, (today spelt Passendale), at the top of the ridge, a mere speed bump overlooking the surrounding countryside. A small party of Australians made it to the church in the village, but were driven out and it took another five weeks for the Canadians to finally capture the town.

Other sites to visit
If you are returning to your hotel in Ypres, continue the circular route and visit the German concentration cemetery at Langemark. This is a grim place, the sparse headstones black rather than white and by the heavy stone entrance, a mass grave of 25,000 German bodies brought in from the battlefields of the salient. Nearby, the Canadian Mourning Soldier commemorates the first gas attack of the Great War and Essex Farm Cemetery where Canadian John McCrae wrote Flanders Fields.

Ypres
In Ypres, the Menin Gate was dedicated in 1927 and erected to commemorate those with no known grave. It lists 6,198 Australians, a sad reminder of our sacrifice in the nearby fields during the Great War. At night, visitors should attend the Menin Gate Last Post ceremony which has been going continually every night at 8pm, since 1928 – rain, hail or shine. 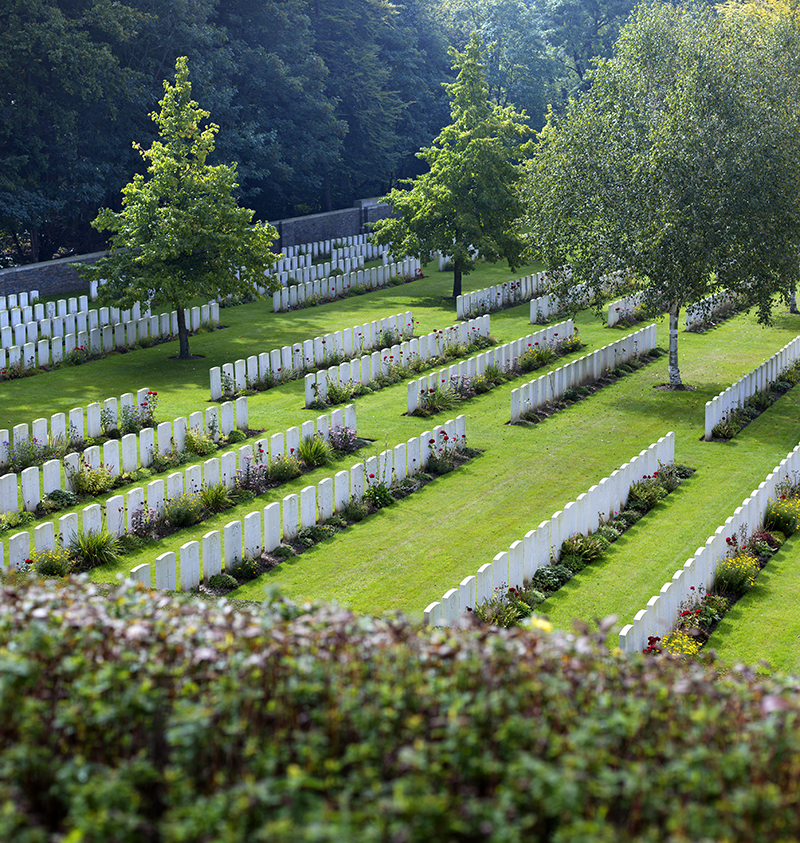 Even today, 100 years after this terrible time, it is hard not to cry, not to feel the sadness and grief of a young nation and their manhood who lie in these beautifully tended cemeteries and these verdant fields so far from home.

So take the time, read about our history, visit these historic battlefields and in the process, remember the sacrifice and those 45,000 Australians who lie today in the cold, Picardy and Flanders mud.

* Will Davies has written four books – Somme Mud, In the Footsteps of Private Lynch, Beneath Hill 60 (a major movie brought this to life) and The Boy Colonel on the Great War. He is a respected historian, and is in demand as a leader of battlefield tours.

Photography by Will Davies & Visit Flanders.

Getting there
Fly to Paris then get the train to either Amiens or Arras. Avis hires cars from both cities but it is best to book in advance. Trains also operate into Ypres, Belgium.

Tours
• Sacred Ground Tours, owned and operated by Australians, specialises in one-, two- or three-day Western Front battlefield tours for singles, couples and small groups. sacredgroundtours.com.au
• Back-Roads Touring has several battlefield tours to bring these important sites to life. backroadstouring.com
• Memorial Museum Passchendaele: passchendaele.be/en
• On 26 September 2017, the Australian Government will conduct a National Commemorative service at Buttes New British Cemetery at Polygon Wood in Belgium. This service will commemorate the centenary of many battles within the region, which are collectively referred to as the Third Battle of Ypres. anzaccentenary.gov.au 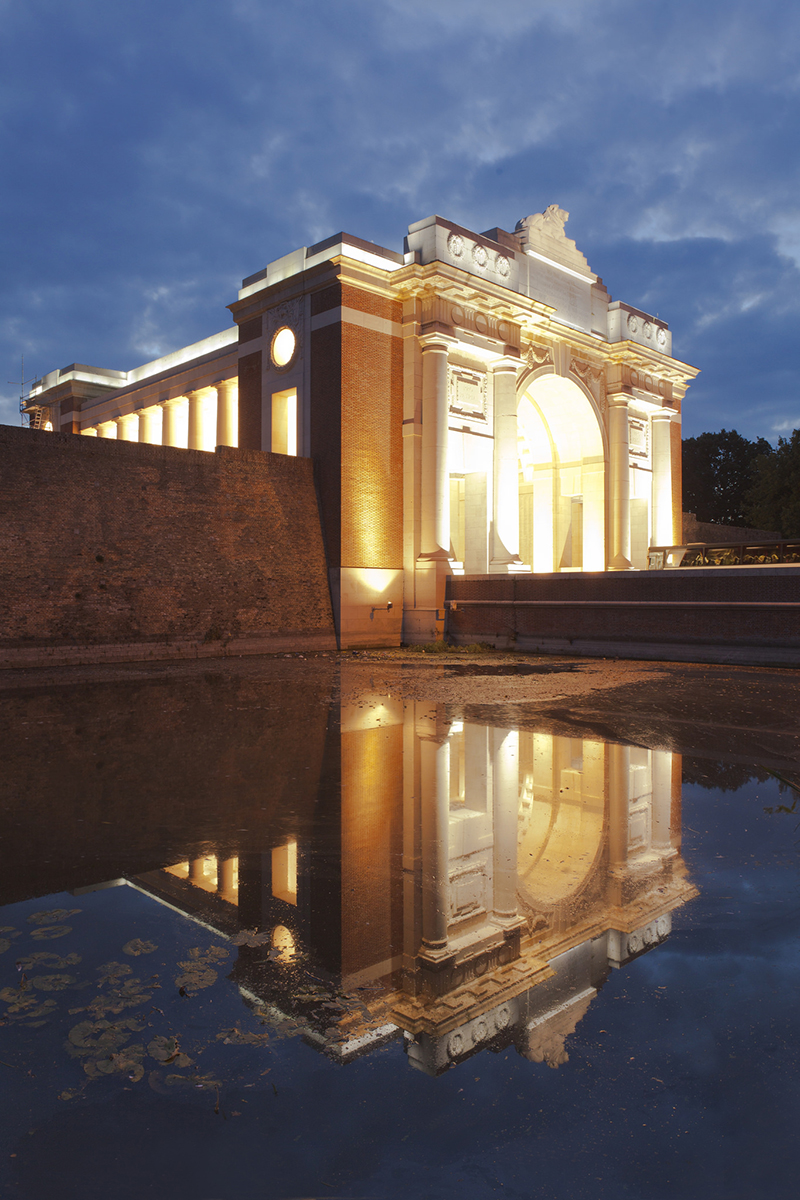