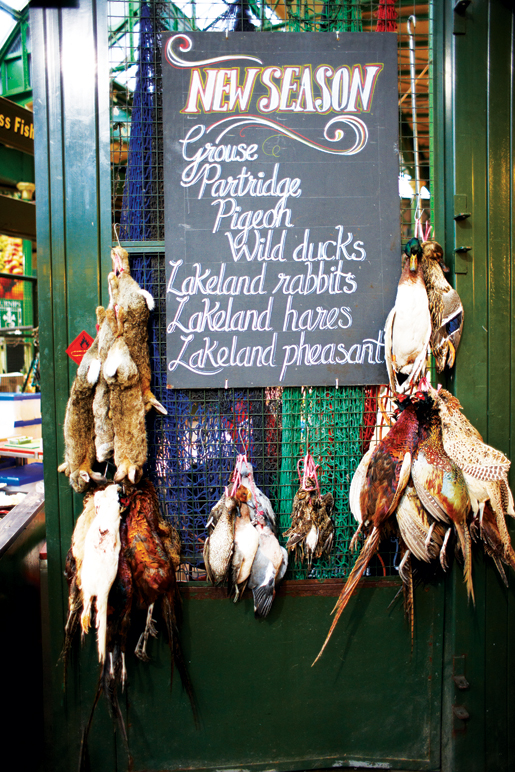 It’s no secret that Chef Michel Roux Jr is passionate about London. The dazzling museums, vibrant art galleries and mellow parks that play the Four Seasons in a kaleidoscope of hues. The architectural legacies steeped in turbulent English history – Westminster Abbey, St James’s Palace, Tower of London and Buckingham Palace. The fearless street fashion and high-end boutiques that roost in the midst of the world’s most exalted addresses. And the West End theatre life, Piccadilly bookstores and lively antique markets that spring into life along Portobello Road.

Then there is the city’s vigorous gastronomic scene which Roux adores, where its rhythms and quirks have not only sparked a culinary renaissance in the lofty neighbourhoods of Mayfair, Marylebone, Belgravia and Notting Hill but have transformed many of the local terroirs of southwest London into the hottest dining venues in the world.

Trends come and go but London’s culinary scene is firmly entrenched. Ask any visitor to describe London’s idiosyncratic vibe and without missing a beat, they’ll tell you that it starts at the table; whether it’s over a silver-tray brimming with wafer-thin cucumber sandwiches and freshly-baked scones with clotted cream, a plate of Jersey mussels at a local gastrobar or sitting ringside in the lion’s den at Restaurant Gordon Ramsay, Heston Blumenthal’s The Fat Duck, Alain Ducasse at The Dorchester and Le Gavroche, which first opened in 1967 by Roux’s French-born father and uncle, Albert and Michel.

Yet London has always been a global creature, sparked by a melting pot of different cultures and piquant tastes. Go anywhere where there’s an absence of velvet-knotted ropes and sparkling silverware, and you will be ushered into neighbourhoods where chalkboard menus of shepherd’s pie and ploughman’s lunch have been replaced by myriad dishes inspired by three continents.

But as Roux attests, modern British cuisine is all about sustainable, organic and low-impact menus, no matter the ethnic persuasion. In fact, the contemporary excitement towards the humble root, cheesemongers and artisanal products has ignited pure wizardry by London’s culinary masters. And nowhere is this more evident than in Roux’s own kitchens at Roux at Parliament Square, Roux at the Landau and Le Gavroche, where he relishes creating his own interpretation of seasonal fare fresh from the farm.

“I love the farm-to-table movement which is well-developed in London,” says Roux who as a boy, searched for wild strawberries in hedgerows, collected chestnuts in the woods and helped his father rear rabbits, pigeons and chicken for the table. “The best food starts with the best ingredients, and I love to eat and serve food when it’s in season. In London, you can get whatever you want but I love to use British seasonal foods.”

Though his penchant for local produce and delectable French sauces were perfected across the English Channel while working as a commis de cuisine at Alain Chapel’s signature restaurant at Mionay near Lyon and while serving in the military at Elysée Palace during the presidencies of Giscard d’Estaing and François Mitterrand, Roux has returned to his English roots not far from where he grew up in the bucolic countryside of Kent. 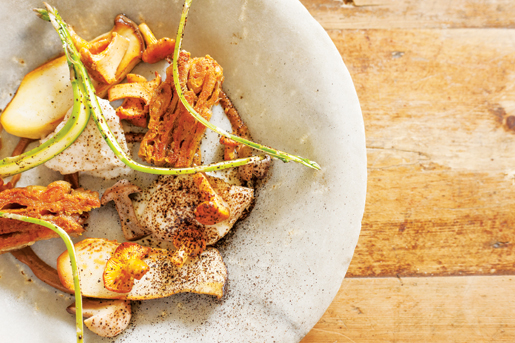 It is in this enchanting corner of England, with its work-horse villages, fruit-scented orchards, summer gardens and fields of golden harvests where he remains patron of the Kent Farmers’ Market and still buys some of his produce.

In fact says Roux, the farmers’ markets including those in London are utterly exhilarating. “I enjoy the excitement you feel when the first asparagus comes through in spring and the purple-streaked artichokes give way to wild mushrooms, garlic and leek in autumn,” he reveals.

Not surprisingly, the epicurean chef can be found pounding the pavement at Borough Market near London Bridge where its gastronomic food tours, cooking demonstrations and succulently-sweet cherries as Roux will tell you, adds another layer of enjoyment to the British capital’s culinary verve.

“In our restaurants, our menus change very regularly to reflect the changing seasonal produce, so there is lots of game in the autumn and fabulous fresh fruits and vegetables in the spring and summer,” says Roux, who as former host of the Great British Food Revival has also been at the forefront of London’s agricultural revolution. “This is why Borough Market is always great because it has so much variety. You can go there and be inspired and it has the best of British produce, too.”

By no means is the pace of the city’s organic rebellion slowing down west of Green Park where the trend to mix lightness with inventiveness is looming everywhere. On one end of the scale, Petrus in Knightsbridge is serving anjou pigeon with smoked onion purée while HIX Mayfair has a menu that features an impeccable mix of British produce; chargrilled paddock farm pork chops with hispi cabbage and garlic shoots and roast loin of Kingairloch red deer with alliums and hazelnuts. But at Koffmann’s, the legendary French chef, Pierre Koffmann has discarded his three-Michelin star bill-of-fare in favour of rustic seasonal dishes inspired from his family’s kitchen in rural Gascony in south-western France.

Of course London is a place where a proliferation of flavours and indulgent concoctions are a notable part of the gourmand experience. “We’ll even pop some produce from my father’s land on the table as a little extra special treat for our guests, when it comes in,” injects Roux whose multisensory dishes come from all points of the compass. 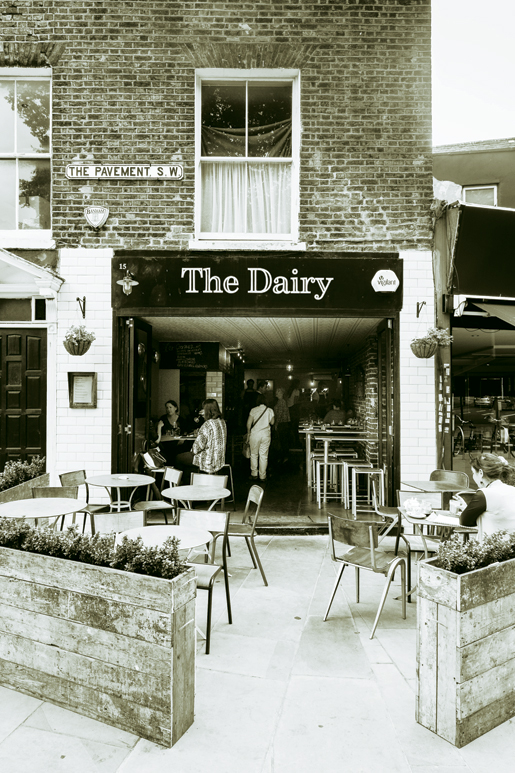 But as any London chef will tell you, the British capital is a juxtaposition of many personalities and tastes. In Roux’s neighbourhood of Clapham in southwest London, there has been a resurgence of reasonably priced cutting-edge restaurants, tapas bars and bistros.

Just follow the exquisite aromas that fill the air off Clapham Common and you will soon step into the cosy enclaves of Trinity, The Manor, Boqueria and The Dairy – also Roux’s favourite haunt. In fact, London’s neighbourhood restaurant scene is a journey of possibilities, where off-the-grid places sizzle with a blend of cultural zeitgeist.

“I think it would be wonderful if every local restaurant was like The Dairy,” says Roux who is equally excited with the new shift in London’s diverse restaurant scene. “It’s affordable, run by a husband and wife team and has a real homely feel.”

Like the modernist fare at The Manor and the delectable dishes they once served at Le Manoir aux Quat’Saisons, chefs Robin and Sarah Gill have dispelled all notions of simple British comfort food with The Dairy’s sartorial garden-to-the-sea taste sensations.

But leave it to the Gallic chefs to reinterpret British cuisine with straight-from-the-net seafood, organic meats and a repertoire of signature dishes.
“At Le Gavroche we have stayed very true to our origins and roots. We are French and we are classical in taste, and people flock to this restaurant because of that,” says Roux who not only took over the reins from Albert and Michel Snr in 1991 but has since left his own imprint on the two-Michelin star name which was inspired by a painting of a French gavroche – an urchin that his uncle found in Montmartre.

Though their iconic dishes have been adapted to reflect London’s modern tastes, which Roux says, “have become lighter and more contemporary over the years,” people still flock to sample his signature Souffle Suissesse and succulent Filet de Boeuf Grillé.

Many restaurants prove the adage that a great dining experience starts with the food and the buzz that surrounds the seasonally-inspired menu. But there are few places in the British capital where the spirit of each dish is not found in the kitchen but with ‘the soul of the restaurateur’. Indeed, some things never change at Le Gavroche.

“At lunch and throughout the evening I make sure that I speak to every table in the restaurant,” says Roux of his speakeasy style. ”It is one of the joys of my job as you meet so many interesting people with the most intriguing stories.” Bon appétit, London. • 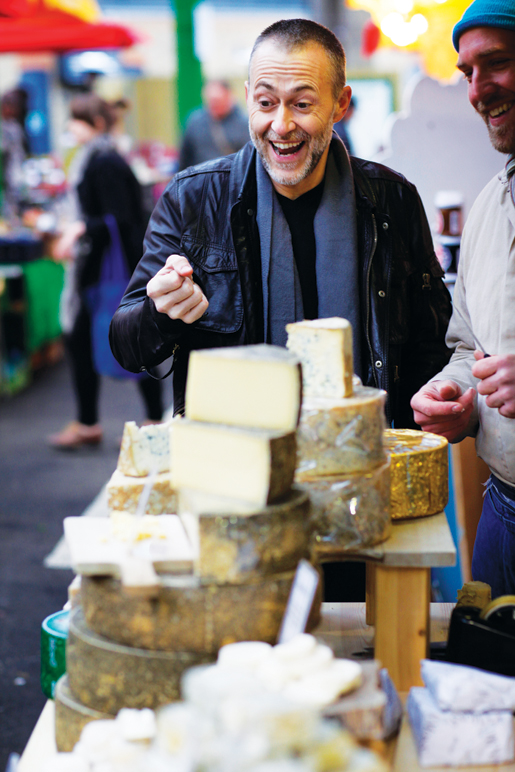