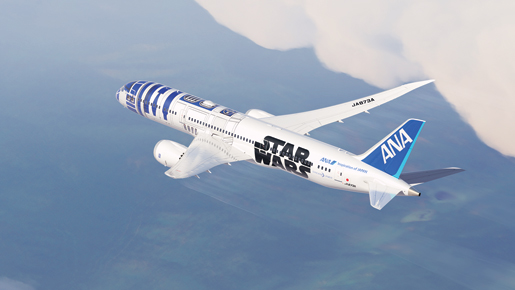 All Nippon Airways (ANA) will be a force in the skies, particularly for fans of all things Star Wars. The airline will be launching an innovative Star Wars livery, featuring R2-D2 on its newest 787-9 Dreamliner, marking the beginning of a five-year ANA Star Wars™ Project and agreement with The Walt Disney Company (Japan) Ltd. This is the first time a character will appear on the exterior of a commercial aircraft.

The Star Wars livery is in line with ANA’s strategy to further enhance its international presence, significantly expanding its international flight network from Haneda and Narita in Tokyo. The airline now has ten North American destinations, launching flights from Tokyo to Houston in June 2015.

The partnership with Star Wars is a perfect match as Japan’s largest airline seeks to connect travellers around the world through this project.