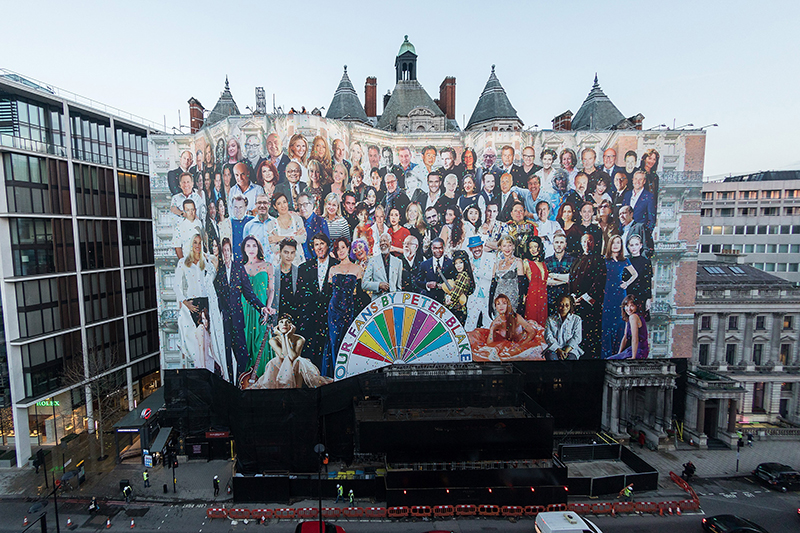 Entitled Our Fans, the giant collage will feature 100 prominent faces, including Helen Mirren, Morgan Freeman, and Joanna Lumley, to represent all the regular guests of the hotel as well as fans of the Group’s hotels around the world.

“We are delighted to showcase this original piece by such a talented artist in London, the home of our European flagship hotel, which is very much a part of the fabric of London life, and this masterpiece not only pays tribute to the city, but also celebrates Mandarin Oriental’s global reach in a truly original way,” Mandarin Oriental group director of brand communications Jill Kluge says.

Born in Dartford, Kent, in 1932, Sir Peter Blake has built up a respectable portfolio of work through his extensive travels across Europe and beyond, coming to the public’s attention and the centre of the London art scene with his first solo exhibition in the 1960s. His work has featured icons of popular culture from around the world and and in 2002, he received a knighthood for his services to art.

The collage has become Sir Peter’s trademark format and one that he has returned to time and again over the years.

“Some of my first works were collages of crowds of people, but this artwork was very different to my usual way of working,” Sir Peter says.

“A collage is very time-consuming and laborious, but this was more a matter of arranging the figures and making them work together, that’s the skill of it.”

The piece is in the spirit of Sir Peter’s design for The Beatles 1967 Sergeant Pepper’s Lonely Hearts Club Band album. In fact, 2017 marks the 50th anniversary of the album and Sir Paul McCartney and fellow Beatles’ bandmate Ringo Starr feature in the poster.

Displayed prominently on the front of the hotel’s iconic façade, the collage will provide an eye-catching diversion along Knightsbridge. At 70.7 metres wider and 24.88 metres high, it is the size of 38 double decker buses, weighs more than 1,055 kilograms and has taken over 10 hours to install.

“It was an amazing project to work on. Hopefully, people passing by will try to spot celebrities they recognise.”