The Maria Island Walk is a wonderful way to explore Australia’s only island national park. 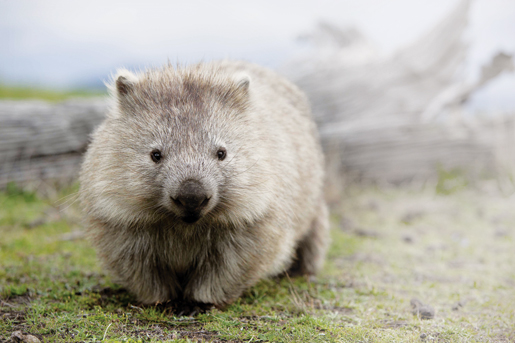 She’s furry, blond and docile with pretty little pointy ears. Not svelte, I might add, but barrel-bummed like a baby bear. Make no mistake, though, I am told she can do the 100-metre dash in less than 10 seconds.

On Maria Island, off the east coast of Tasmania, the need for speed scarcely arises. Indeed, this might well be wombat utopia. On our four-day walk we see dozens of normally nocturnal bare-nosed wombats grazing contentedly all day long oblivious to our clicking cameras … even when we transgress feeding grounds carefully demarcated by cube-shaped poo.

Ten of us are doing the Maria Island Walk with Ned and Claire, two young energetic and informative guides who ply us with as many fascinating stories as they do serious lashings of gourmet food and Tasmanian wines. There’s no better way to explore Australia’s only island national park.
And what stunningly diverse landscapes it offers … a mini Tasmania within Tasmania. Dozens of white talcum powder beaches, boulders draped in technicolour lichen, abstract swirls on sandstone headlands, tall stands of aromatic blue gums, 300-million-year-old shell fossils embedded in limestone cliffs and soaring dolerite columns offering views across the seas to Freycinet Peninsula and beyond.

And it’s not just a wombat wonderland. There are Tasmanian devils, wallabies and kangaroos, pademelons and potoroos, penguins and dolphins, rays and seals and birdlife almost as flamboyant as the Italian dreamer who set about creating a Mediterranean-style Eden here at the end of the earth.

It’s low tide when Maria Island Walk’s boat deposits us on Shoal Bay’s deserted beach. Packs on backs, shoes in hands, we wade through the aquamarine shallows much like the French explorers on Nicolas Baudin’s scientific expedition did in 1802. The landscape remains unchanged. While it was Abel Tasman on a passing ship who named Maria Island 160 years earlier after the wife of the Governor-General of the Dutch East Indies, we can thank Baudin for the mellifluous names he bequeathed to the Pointe des Pyramides, Cape Boullanger, Point Lesueur and Riedle Bay. 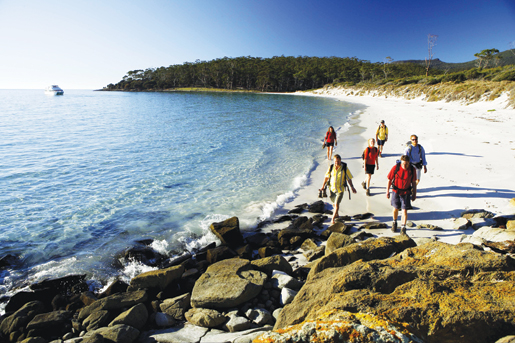 We scurry across a narrow isthmus to Riedle Bay, squally whitecaps dancing across the waves. Tucked behind banksia and she-oaks is Casuarina Beach Camp, six green canvas tents on wooden platforms framing a large communal dining space and deck.

Our packs stashed, we saunter under soaring peppermint gums with Ned evoking Maria Island as “more Jurassic Park than Noah’s Ark” since it’s now the home of the first translocated breeding population of wild Tasmanian devils free of the facial tumour disease that has wiped out four-fifths of their relatives.

The fairy penguins we spy in burrows under gum trees may not be so happy about the new order. We discover a couple of bleached penguin carcasses on Haunted Bay’s impressive granite boulders covered with crimson and orange lichen as though painted from a giant’s brush. Its name, by the way, may refer to mournful baby penguin cries for mum to bring home food or perhaps to the haunted souls of whalers who killed sperm whales here for lamp oil and corset bones.

Returning to a table set with china and candelabras we feast on olive tapenade, vine-ripened tomatoes and basil bruschetta on Hobart’s finest Pigeon Hole sourdough followed by a risotto of Spring Bay scallops and asparagus, and a summer berry pudding with King Island cream. In the glow of candlelight and chardonnay, ten walking buddies become friends and wonder if the adventures can get any better.

Even the twittering of honeyeaters and shrieks of swift parrots don’t wake me from my slumbers snug inside a sleeping bag on a comfy mattress. It takes the smell of freshly-brewed coffee and scrambled eggs with smoked salmon to do that.

And Claire’s tip-off that we’ll walk five beaches today, each one more gorgeous than the next, on our 12-kilometre hike through the early chapters of Maria Island’s history.

Heading north, she gives us the first instalment at an expansive midden under a casuarina tree. The Tyreddeme band of the Oyster Bay Aboriginal tribe lived here for thousands of years and their delectable diet of crayfish and abalone, oysters and other shellfish is spread out before us like an ancient still life. 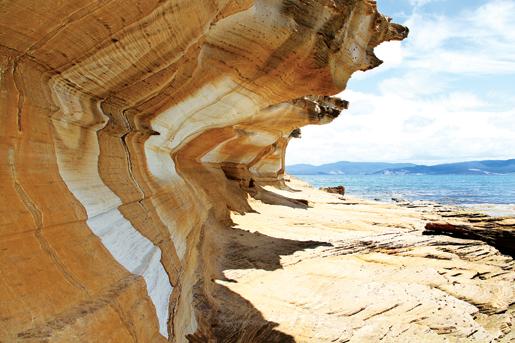 On the forest fringe of old French’s Farm we’re thrilled to glimpse a devil before it disappears with a snarl under some ferns. The beaches are indeed exquisite, littered with large flat Angasi oyster shells, scurrying terns and oyster-catcher chicks, small stingrays gliding in the mercury silver shallows of Mercury Passage.

Skirting samphire wetlands dotted with grey-feathered, red-legged, green-beaked Cape Barron geese, we enjoy our tasty salads under shady Macrocarpa pines. Convict-brick prison cells rim the crest of the hill as a reminder that this area was once a convict probation station and wheat farm. Marauding seals waddling into the fields to snack on the grains (the mind boggles) and lack of fresh water brought its swift demise.

We pass entire headlands of grazing wombats, walk through Tasmania’s largest stand of aromatic blue gums and, at Bloodstone Point, discover orange and red cliffs that were an important source of ochre for the Tyreddeme Aborigines.

Relaxing on the deck of White Gums Camp that afternoon we gaze at reproductions of detailed drawings by Baudin’s illustrators of Maria Island’s original inhabitants. They stare at us with ochre-smeared faces and coiled hair, women with rope-like necklaces and men with ritual body scarring. One of our walking group, also called Maria, is from Pitjantjatjara country in Central Australia. “I wonder what this mob’s dreaming story was,” she says the next day as we gaze on Mount Maria’s burly profile, “because it’s difficult to really understand a people’s culture unless you know what they believe.”

A corkscrew collecting accountant, an anaesthetist, a Steiner teacher, a lawyer and an Aboriginal medical centre manager are other members of our group while country boy Ned is doing a PhD in Third World food systems and Manchester-born Claire has a degree in coastal systems. It makes for lively conversation over wakame and mushroom miso soup, barbecued quail and lamb chops with couscous, and flowerless chocolate cake with island berry coulis as boobook owls serenade us from the treetops. 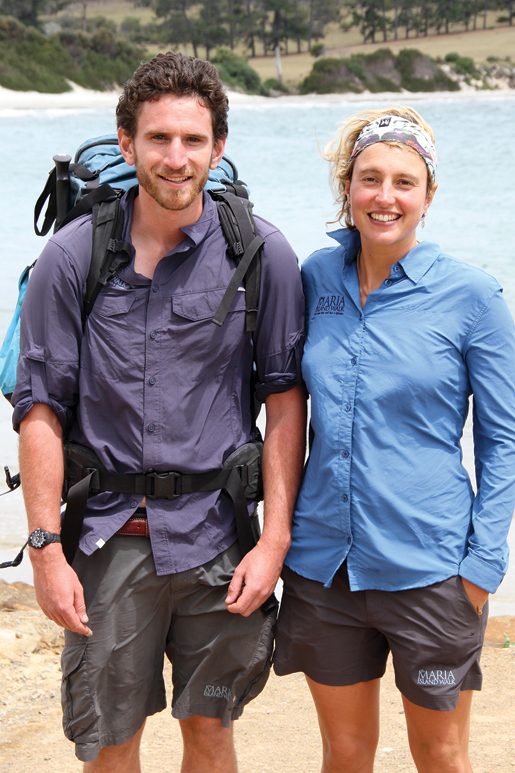 We split into two parties on day three. The adventurous head out early to scale the scree of 620-metre Bishop and Clerk twin-peak dolerite columns, so named for their likeness to the profiles of clergy. They regale us over dinner with just how magnificent the vistas are all the way to Mount Ben Lomond on the mainland.

The rest of us have slowed to wombat time (and I don’t mean on the rare occasions when they become Olympic sprinters). We meet wallabies in the woods and watch blue herons fishing in a brackish stream. Sauntering along an old convict coastal track, we watch dolphins offshore and our furry friends onshore so diligently grazing hillsides they resemble green carpets.

Ned shows us a convict-era quarry whose sandstone blocks were used to build the Melbourne GPO as well as the Commissariat, the oldest building and now the information centre in Darlington. We feast on pasta salad at Hopground Beach, named after the nearby hop fields around Australia’s oldest remaining Oast House, whose kiln dried hop flowers to make beer during the early convict period. Perhaps this is why convicts finagled ways to come to this relatively benign outpost.

Just around the corner are the Painted Cliffs, swirling sandstone rock formations formed by iron-oxide-stained ground water, tides and wind. And at our feet, are rock pools alive with pink algae, blue sea stars, and red anemones. Back on the track we pass wetlands buzzing with birdlife including a male flightless turbo chook and his harem, Tasmania’s bizarre kiwi bird equivalent.

At the top of the hill, UNESCO World Heritage-listed Darlington Probation Station is spread out before us behind the creamy sweep of a half moon bay …. white-washed cottages, convict-built red-brick buildings, the stone Commissariat, striking ruins, cement silos and wooden Victorian cottages. Ned explains all as we follow the Macrocarpa pine-shaded road towards Bernacchi House.

Turns out that 30-odd years after the last convict left in 1850, Maria Island became the passion project of Italian silk merchant Diego Bernacchi, who married beneath himself and wanted to create a whole new world here, a gleaming Ceylon of the Antipodes. We hear his story over a grand finale dinner in the formal dining room at Bernacchi House, where we spend our last night, freshly showered and tucked into comfy beds.

First he planted mulberries for silkworm farms, developed olive groves and vineyards, then started cement works. Darlington, renamed San Diego, was a boomtown with an elaborate Coffee Palace restaurant complete with grand piano. Things went pear shaped in the late 1890s but after World War I King Diego (as newspapers of the time were wont to call him) was back charming new investors with more grand plans only to fail again due to a combination of world recession and poor quality materials.

On our final day we explore Darlington’s eclectic mix of beautifully-preserved buildings before peering over some of the world’s most impressive exposed limestone cliffs under the brooding profiles of twin peaks Bishop and Clerk. The giant prehistoric clam shell fossils in the old lime kilns below offer a sobering reflection on the passage of time.

Indeed, after four days at a walker’s rhythm wandering powdery beaches and slowing down to marvel at lipstick-pink robins and iridescent swirls on abalone shells, we all savour a complete sense of removal from the world. No cars, no shops, no television, no white noise of modern life. Just bird song, a quiet marsupial or two, good food and wine, and terrific conversation triggered by stories from a past as eccentric as it is fascinating. That might just be rarer than the 40 spotted pardalote I just saw in the crook of a white gum. 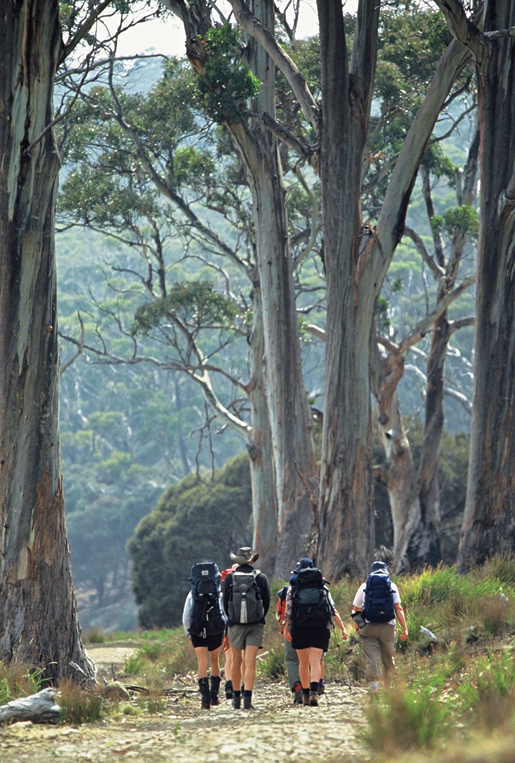 Maria Island Walks transports guests from their hotel in Hobart, with a stop at the office to collect equipment, to Triabunna (about a 90-minute drive) where their private boat makes the 40-minute transfer to Maria Island.
Getting Around

Trips run daily from 1 October to 30 April (subject to availability).

Accommodation is provided at two permanent camps with the final night at the heritage-listed Bernacchi House.

Maria Island Walks is a member of Great Walks of Australia.
mariaislandwalk.com.au