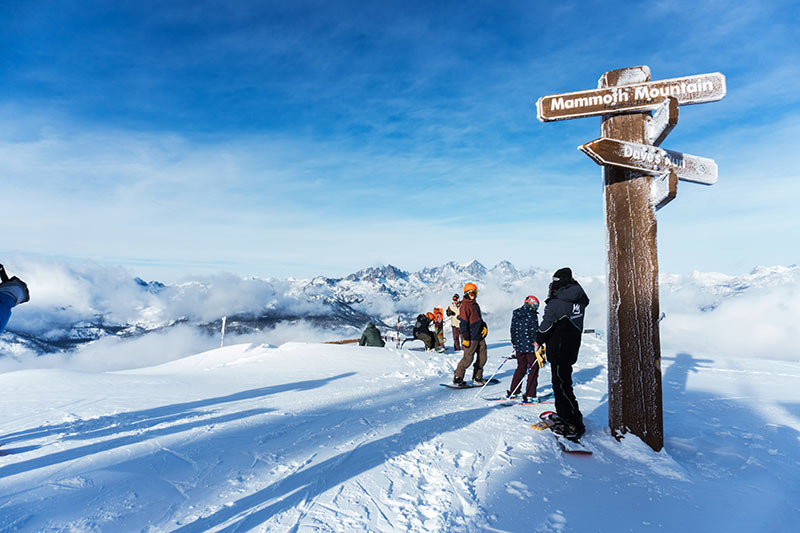 Mammoth Mountain was formed by a series of volcanic eruptions that ceased more than 50,000 years ago. But oversized, prehistoric fossils aren’t the reason for the town’s name. After the area was inhabited by the Paiute Indian Tribe for about 1000 years, it caught the attention of miners prospecting for gold and, in 1878, Mammoth Mining Company was founded.

Mammoth City followed and, while the Gold Rush didn’t boom, word of its beautiful locale in the mountains spread to other Californians. It would be another 25 years before automobiles enabled a ‘convenient’ 2.5-day trek from Los Angeles to the renamed Mammoth Camp, a haven for hiking, fishing, hunting, camping and more. A new highway in 1937 made the trip even more accessible, including for a group of hardcore skiers – one of them being Dave McCoy. 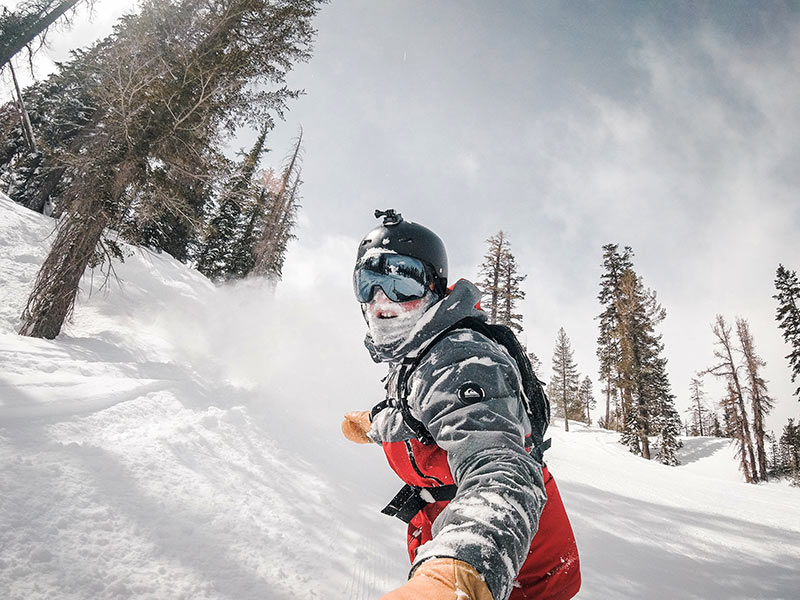 Snow falling on cedars
McCoy sold his motorcycle in order to pay for a rope tow in 1938 before obtaining a permit from the US Forest Service in 1945 to install a permanent one. ‘The Pit’, now known as Main Lodge, opened at the base of the mountain as people lined up for hours to take the first chairlift up for fresh turns in the snow.

Today, McCoy is 102, and works as a photographer and mechanic, and Mammoth Mountain is known as California’s premier ski and snowboard destination. At 3369 metres, the highest chairlift-accessible ski resort in the state boasts an impressive 940 metres of vertical and 865 sq. km of skiable terrain serviced by three lodges and three additional stations – all of this accessible by a total of 28 chairlifts. The resort is also known for its long ski season, often staying open through Memorial Day weekend (late May) or even June. In 2017 it was open until August. 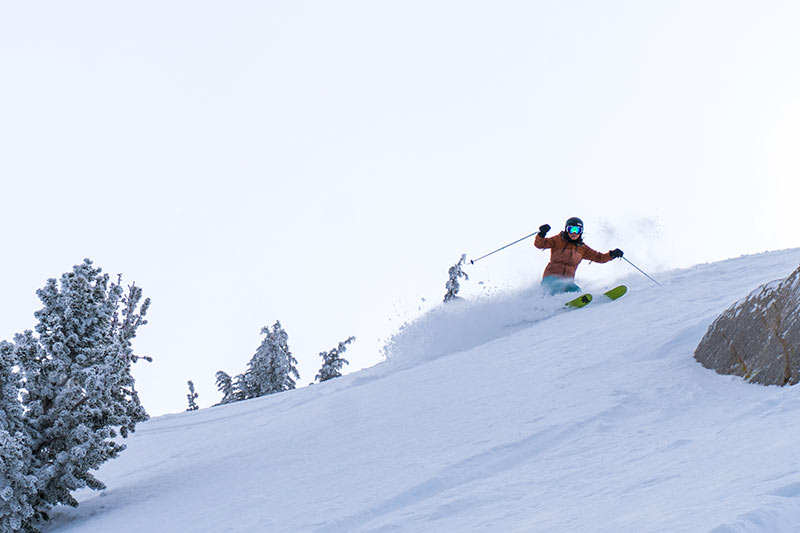 Go for gold
Mammoth is the training ground and even home for many Olympians, from alpine and freestyle skiers to snowboarders and marathoners. Shaun White, Chloe Kim, Kelly Clark, Maddie Mastro and Stacey Cook are all Olympians, with the first two bringing home gold in the halfpipe in PyeongChang, South Korea. In fact, the resort is very closely tied to not only snowboarding history, with the sport’s acceptance influenced by laidback Californian surf culture, but the sport’s progression, too. There are five  Unbound terrain parks and three halfpipes and competitions such as the US Snowboard & Freeski Grand Prix and the Volcom Stone’s Peanut Butter & Rail Jam regularly take place at Mammoth Mountain.

There are also options in Mammoth for skiers and snowboarders who would like to keep things more low-key with plenty of terrain for beginners and intermediate skiers and riders and an excellent snow sports school should you wish to polish up your technique. Mammoth’s sister mountain, June Mountain, is well worth a day trip, too. It is just over 30 km away and is a more intimate resort with fewer crowds, mostly comprised of locals. 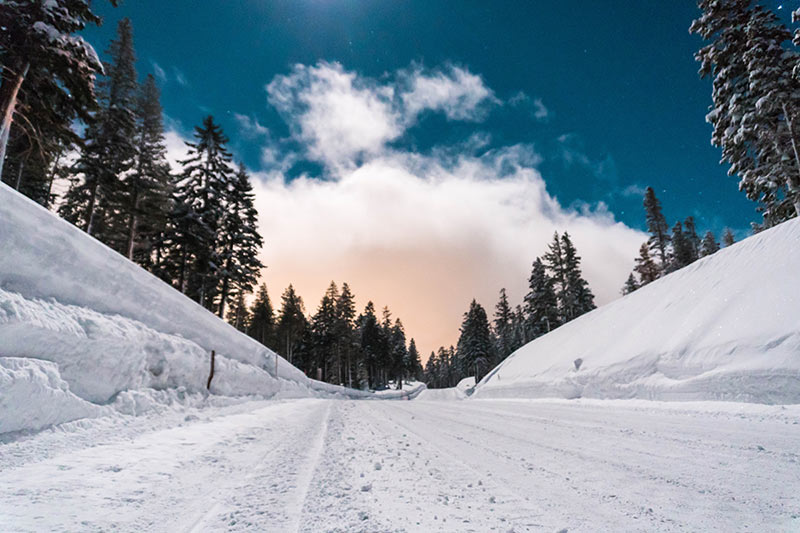 Ride and slide
Snowshoeing is also a great way to enjoy the sights of Mammoth Lakes, with more than 12,000 sq. km of wilderness. Over 225 km of track winds throughout and into Inyo National Forest. Cross-country skiing is also a great way to see Mammoth with Tamarack Cross Country Ski Center the perfect jumping-off point to more than 30 km of freshly groomed skating and snowshoe trails. Families can also enjoy snow play and tubing at Woolly’s Tube Park.

If you feel like adding a little horsepower to your winter adventure, snowmobiling is your answer. There are one-, one-and-a-half- and three-hour guided tours, conditions permitting, which launch from Main Lodge at the resort. Another option is to take a tour to the summit on a snowcat, where you’ll enjoy cheese, charcuterie and Champagne on the beautiful mountain, in full view of the Minarets, Ritter Range and more. 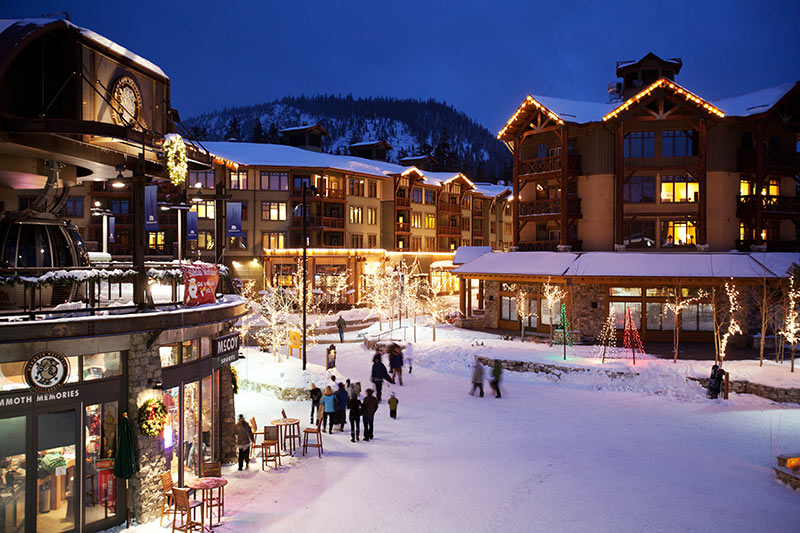 Shop, sip and sup
The Village at Mammoth provides the perfect hub for visitors all hours of the day, especially for après-ski. Regroup with friends and family by catching happy hour at Shelter Distilling, a brand-new distillery just steps from the gondola, before moving on to dinner at Smokeyard BBQ and Chop Shop or Campo. 53 Kitchen & Cocktails is a great establishment for both.

You can also catch some gastropub fare to wash down with local brews right at the source at The Eatery by Bleu at Mammoth Brewing Company just down the street. If you’re feeling like after-dinner drinks, head on to The Clocktower Cellar for a few drinks over a lively game of foosball. Bowling is also a great activity at the end of the day, and you’ll find more than a dozen lanes facing a full bar at Mammoth Rock N Bowl. 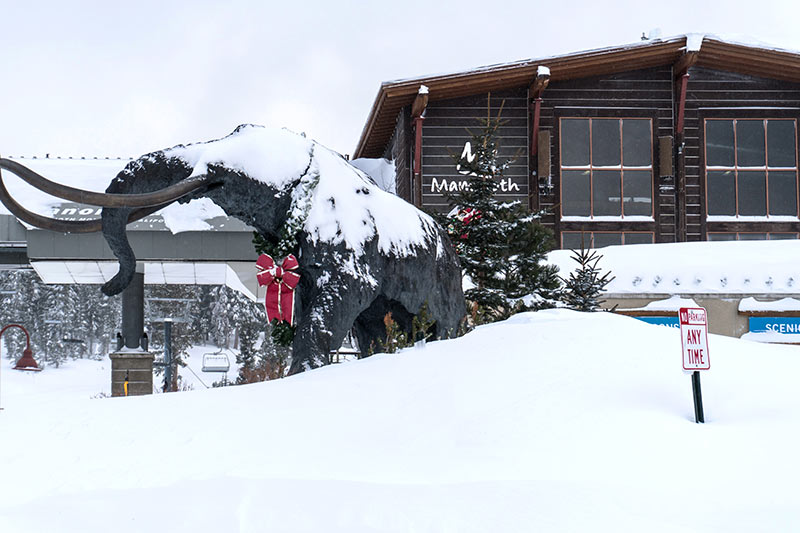 Pampering post powder
Get your retail therapy fix in The Village for official Mammoth Mountain gear from internationally known outdoor brands or fashionable winter clothing made by local designers at Tonik, Chato and Roma Boutique. Away from The Village and along Main Street, you’ll also find ski (Footloose, Kittredge Sports) and snowboard (Wave Rave), which provide rentals.

Anticipate some soreness from a day on the hill? Book a massage or other spa treatment at Simply Massage Body Boutique in the Village. On Main Street, you’ll find Intouch Microspa & Boutique and Belladonna Day Spa for your massage and other pampering needs. If you are looking for a reprieve while in nature, head to the hot springs for a soak. There are no developed facilities, so it’s free. Pulkey’s Pool Hot Springs are the most accessible hot springs in the winter. 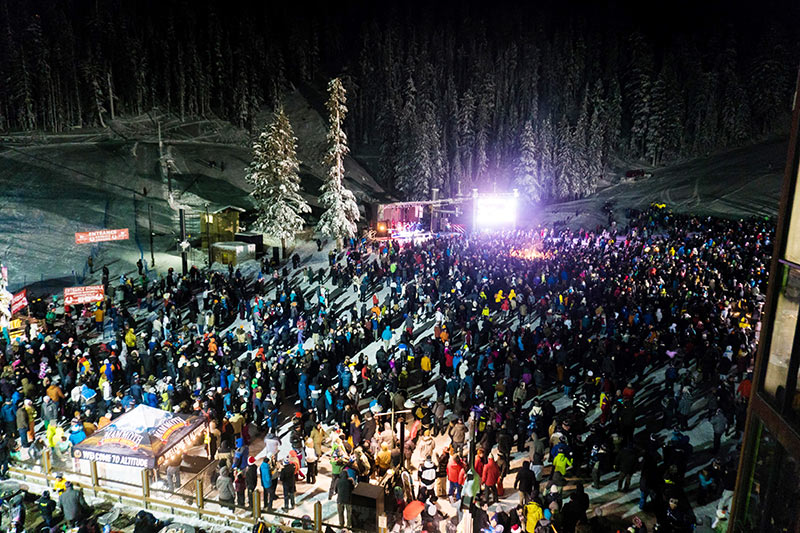 Light up the Night
If you happen to be visiting in mid-December, keep your eye out for the annual Night of Lights, a winter kick-off celebration filled with live music, fireworks and camaraderie at Canyon Lodge.

Whether you’re visiting with family or friends, Mammoth Lakes is the perfect winter getaway. It’s got something for everyone, from the avid skier or snowboarder to revellers who simply want to enjoy the sights from the lodge. And while you enjoy that beverage after a day on the slopes, raise a glass to Dave McCoy, the man who started it all. 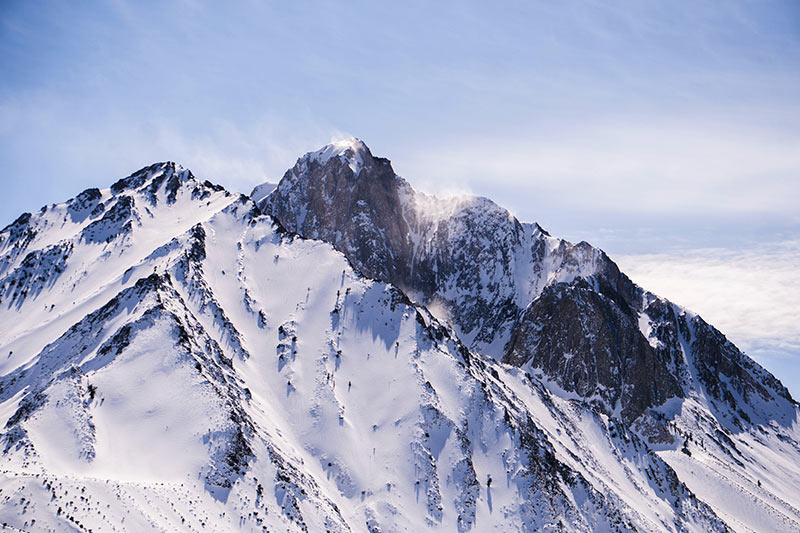 TRAVEL FACTS
Getting there
Fly to Los Angeles and then Mammoth Yosemite Airport with United Airlines. united.com

When to go
Mid-December through April, though Mammoth is consistently open until the end of May. ‘The Night of Lights’ takes place in mid-December.

Where to stay
The Westin Monache Resort is just across the road from the village and the gondola that takes you to the base. The Resort offers a convenient ski and snowboard valet and has a great happy hour spot at its restaurant, Whitebark. westinmammoth.com 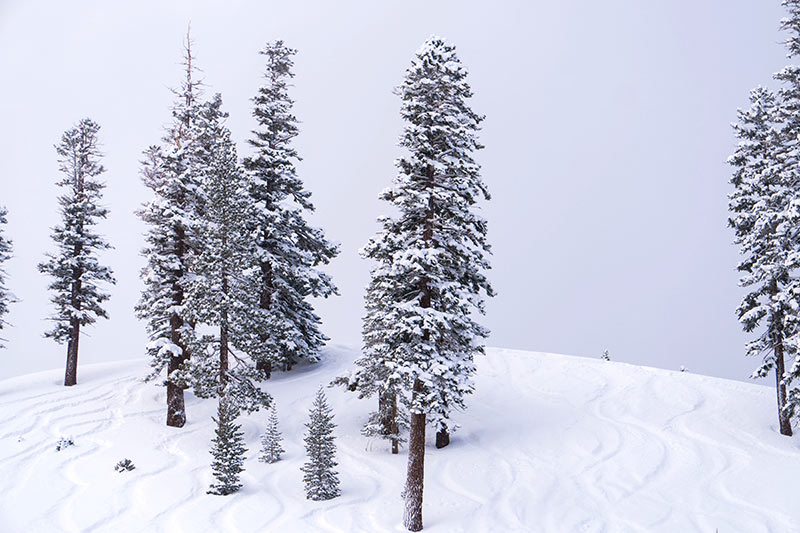