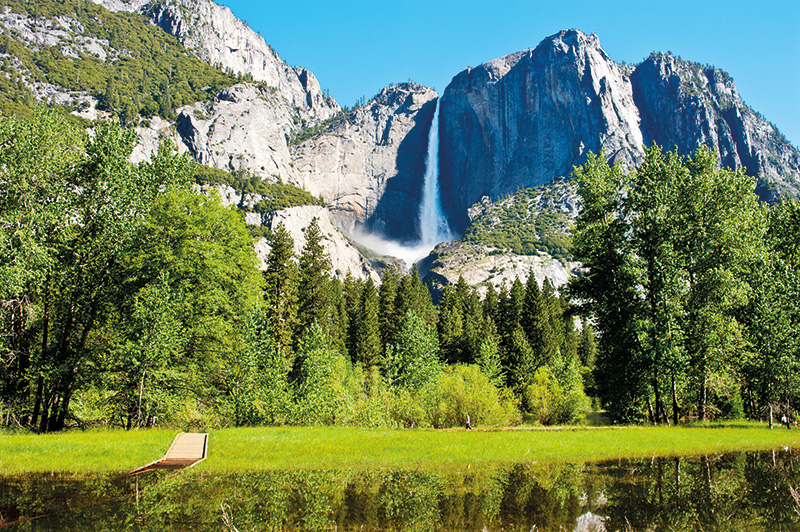 The Mammoth Lakes area is stunning. The jagged 8.4-kilometre-long, 3,000-metre-high Mammoth Crest of California’s Sierra Nevada range towers above a basin of nearly two dozen crystal-clear lakes: five you can drive to and another five only a short hike from the road. The isolated grey, granite monolith of Crystal Crag juts into the sky above the lakes, while both the Lake Basin’s and town’s skylines are dominated by rounded red-brown volcanic Mammoth Mountain, shaped like a mini-version of Washington State’s massive Mt. Rainier – although at 3,370 metres, the appropriately named mountain is not a “mini” anything.

Hollywood’s in-crowd adored the area in the 1920s. Tamarack Lodge on Twin Lakes was built in 1924 by the Foy family, part of Tinsel Town’s vaudeville crowd and the subject of the 1955 Bob Hope film The Seven Little Foys. The lodge’s pine lobby with over-stuffed couches and a pair of wooden cross-country skis over a substantial stone fireplace, still retains the feeling of snug opulence from the Roaring ‘20s when the film industry’s elite hung out there.

If you can pull your eyes away from the rugged mountain scenery here – 450 kilometres north of Los Angeles and 50 kilometres south of Yosemite National Park – you’ll find places to hike, mountain bike, horseback ride, kayak, canoe, swim, fish, golf, real-rock climb on real rocks, fake-rock climb on a climbing wall or do almost any outdoor activity. If you’re under 14, you could ride a zip line. Here are a few tips for getting started.

HIKING, BACKPACKING & HORSE RIDING
Hundreds of kilometres of trails cover these mountains, and many begin in Lakes Basin. Visitors take gentle strolls around the lakes or head uphill on the Duck Pass Trail from Lake Mary to Arrowhead and Skelton Lakes and on to 3,300-metre Duck Pass for views north and south over the Sierra Nevada. The short McLeod Lake Trail starts at Horseshoe Lake, where seeping volcanic gasses have created a bizarre ghost forest. The steep trail from Lake George to Crystal Lake at the base of Crystal Crag rewards hikers with views – and a feeling of accomplishment. Wild flowers like scarlet penstemon, orange paintbrush, yellow Lemmon’s draba, blue flax, lavender pennyroyal, and tall white corn lilies line many trails.

The Red’s Meadow area is one of the few places where the 4,265-kilometre Pacific Crest Trail (which Wild author Cheryl Strayed hiked along) and overlapping John Muir Trail come out of the woods. Here hikers and backpackers can trek on some of the prettiest parts of the famous trails. 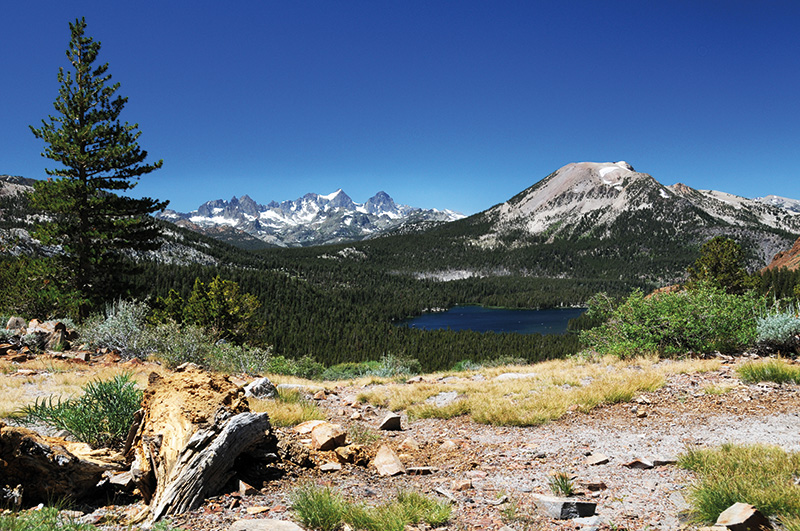 Hikers enjoy beautiful Sierra Nevada views, but you can also drive to one of the most dramatic viewpoints in the Sierra: Minaret Vista, just two kilometres west of the main ski lodge. At the 2,825-metre-elevation viewpoint, visitors gaze out across the canyon of the San Joaquin River and up toward distinctive grey granite, pyramid-shaped Banner Peak and Mount Ritter, and the sawtooth Minarets, one of the most picturesque subranges within the Sierra.

For another perspective and more 360-degree views, ride the Mammoth Mountain Gondola to 3,370 metres in elevation. The Eleven53 Interpretive Center (named for the summit elevation in feet) has displays about animals, volcanoes, weather, geology, culture and wild flowers. (Tip: If you want to walk around – which, of course, you will – bring a jacket because the wind gets chilly up there.)

ADVENTURE CENTER
While the big “kids” mountain bike, little kids can play at the Adventure Center at the base of the gondola, where a life-size statue of a mammoth with massive tusks stands guard. Children can go bungee trampolining or climb a 10-metre climbing wall or, if they’re under 14 years old, scoot down a 100-metre-long zip line. 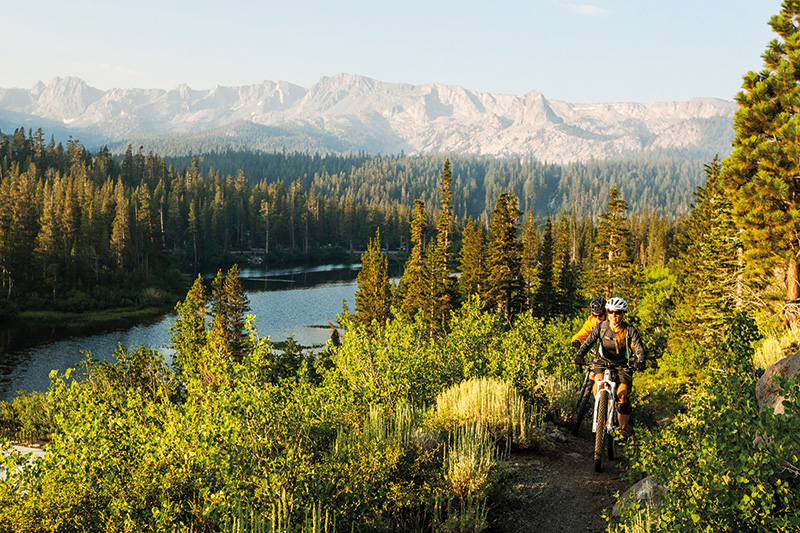 The Mammoth Mountain Gondola also serves as elevator to wild mountain biking in Mammoth Bike Park with more than 130 kilometres of single-track and trails dropping 1,000 metres from the summit. Beginners might want to skip routes named Pipeline, Kamikaze and Skid Marks and instead take lessons, such as the “Intro to Mountain Biking.”

Road cyclists (and walkers and parents pushing baby carriages) can travel on more than 27 kilometres of designated pathways through town, including up to and around the Lakes Basin. Bicyclists load their bikes on a rack on the back of the free Lakes Basin Trolley, take the trolley up the hill and ride their bikes around the lakes and then back downhill to town. You can also rent electric bicycles.

FISHING & WATER SPORTS
Fishing remains one of the biggest draws for the area with rainbow, brook and brown trout and the occasional native golden trout. Visitors can fly fish, troll from a boat, cast from the sides of a rushing stream or just drop some bait into a quiet lake. Nearby Convict Lake and the calm lakes in the Lakes Basin are good (although chilly) places for learning stand-up paddle boarding. The hardy might voluntarily go for a swim. 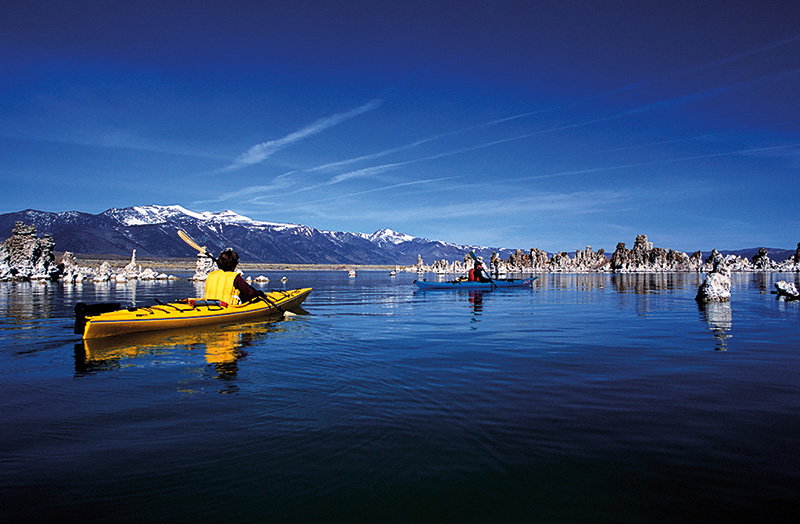 While you can row a boat, kayak or canoe on many of the lakes, the weirdest is oddball and alkaline Mono Lake, an avian haven for one to two million birds and a former inland sea with strange “tufa towers.” Fifty kilometres north of Mammoth Lakes the lake used to be much deeper, and calcium-carbonate spires formed under the surface.

Caldera Kayaks offers guided tours from the South Tufa area so kayakers can glide near the strange grey pillars jutting up to six metres out of the water. The Mono Lake Tufa State Natural Reserve gives free guided walks along the shore three times a day. 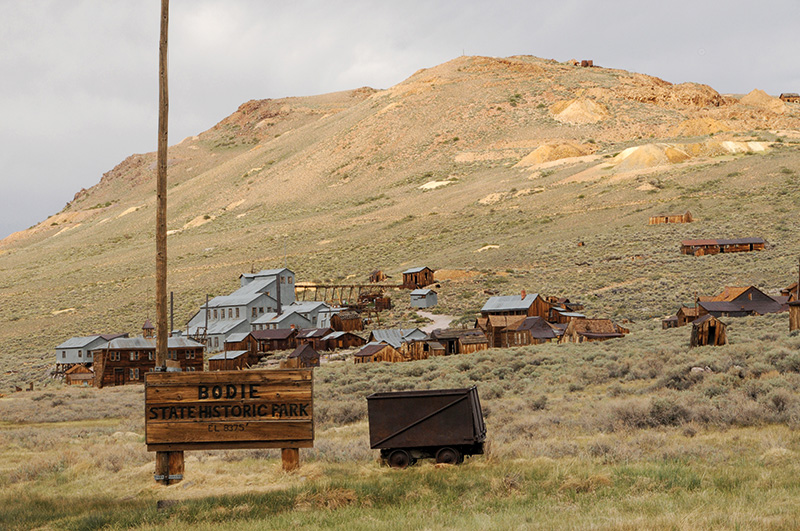 One of the best preserved ghost towns in the American West lies another 50 kilometres northeast of Mono Lake. Bodie, a former gold-mining boomtown that looks as though the entire citizenry of 10,000 people up and left one day, exists in “arrested decay” so visitors can look in windows and still see goods on store shelves. You can poke around or take an informative guided tour – or a ghost walk. Photographers love the place.

YOSEMITE NATIONAL PARK
Tioga Pass and the dramatic eastern entrance to Yosemite National Park – one of the United States’ greatest natural wonders – lies 20 kilometres west of Mono Lake. Some visitors make Mammoth Lakes their base for exploring Yosemite’s spectacular granite-domed high country, including the Tuolumne Meadows area and the dazzling Olmstead Point viewpoint. From Olmstead Point you can look out at a side view of the park’s iconic Half Dome as well as back at Tenaya Lake framed by other granite domes. Be aware that the line can be long at the entrance to Yosemite, especially on summer weekends.

BREWERY TOUR
After all that exercise a good way to relax could be the new Eastern Sierra Brewery Tour, which goes to the Mammoth Brewing Company, Black Doubt Brewing and June Lake Brewing. By taking a tour, all participants can taste local brews without having to select someone as the designated driver.

GOLF
For those whose ideal Great Outdoors trip means hitting a little white ball with a club, Mammoth Lakes has two options. The Sierra Star Golf Course, which at 2,440 metres above sea level, claims to be the highest golf course in California. This means that because of thinner air, your ball might go further. Nearby Snowcreek Golf Course is known for its streams and water hazards. Both rent clubs.

BOWLING & INDOOR GOLF
If all that intense Sierra sunshine has finally gotten to you, there’s Mammoth Rock ‘n’ Bowl. This new bright modern 12-lane bowling alley also has three indoor golf simulators as well as ping pong, foosball and darts. Both its French-style Brasserie restaurant and its casual outdoor patio have panoramic mountain views. You just can’t get away for long from those stunning alpine vistas in Mammoth Lakes.

Summer or winter, spring or fall – the whole focus of Mammoth Lakes is the outdoors. Forty bears live peacefully within the wide-ranging town limits (sorry, but you’re unlikely to see any of them), and adorable little chipmunks and ground squirrels scamper through campsites. Mammoth Lakes is a place to play and a place to learn – and a great place to experience California’s wild natural environment. •

Getting there
Qantas, Virgin Australia, United, American and Delta fly between Australia and Los Angeles. American and Alaska fly between Los Angeles and Mammoth Lakes Yosemite Airport. However, the five-hour drive north from L.A. on Highway 395 to Mammoth Lakes along the eastern side of the Sierra Nevada mountains is gorgeous (once you get out of L.A. traffic).
• Qantas: qantas.com
• Virgin Australia: virginaustralia.com
• United Airlines: united.com/au
• American Airlines: americanairlines.com.au
• Delta Airlines: delta.com

When to go
Mammoth Lakes has a long ski season so a long winter. June to September are the summer travel months.

What to know
Mammoth Lakes lies at a high elevation so it takes a few days to acclimatise to the altitude. Take it easy for your first few days. Drink lots of water, and go easy on alcohol. High elevation also means more intense sun so use plenty of high-level sunscreen and wear hats and sunglasses. Much of the Sierra is wilderness so be aware of hiking and fishing rules and restrictions, which can be found at the visitors centre and online.