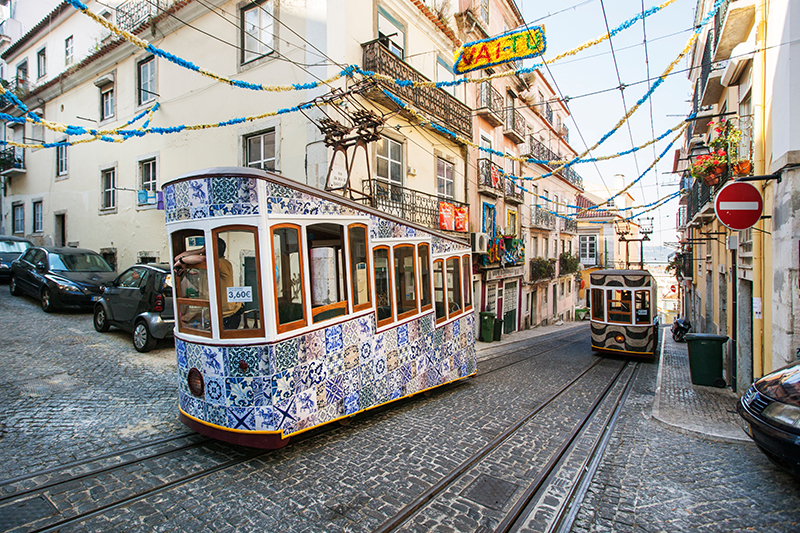 Even the locals acknowledge it: Portuguese people are a modest bunch. Their long tradition of unpretentiousness means that they don’t blow their trumpets loudly about Portugal and their stunning capital city, Lisbon (the exception to that was during the Age of Discovery in the 15th and 16th centuries, when the Portuguese explored and colonised countries around the world).

After nearly 50 years of dictatorship (1926 to 1974) followed by decades of recession, Portugal stagnated. Although still not without its problems, over the last decade, as foreign investment and tourists have poured in, Portugal – especially Lisbon – has emerged like a butterfly. 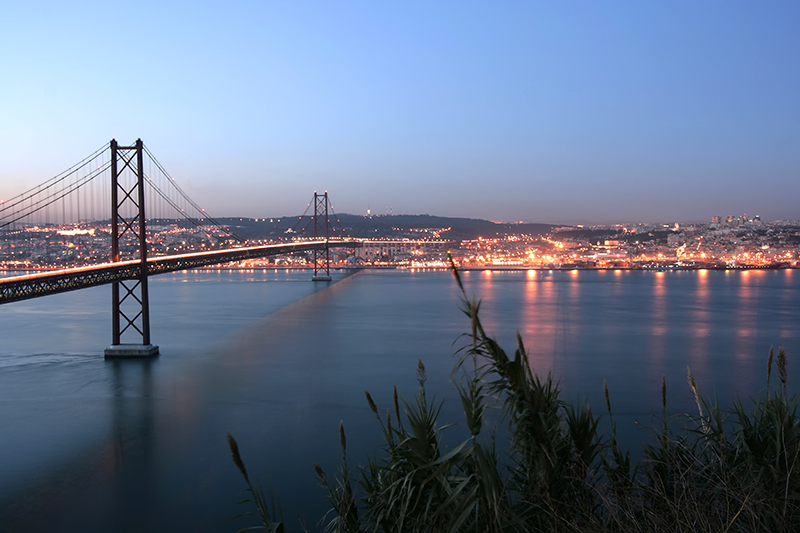 This colourful city has rapidly evolved into the coolest of cool (without being contrived), thanks in part to its creative locals, enthusiastic artists and passionate protectors who have not only ensured the survival of many of the city’s traditional shops through their lobbying efforts, but have transformed the likes of former textile mills into cutting edge creative hubs, and 18th century buildings into cafés.

And, true to Portuguese style, Lisboetas (locals from Lisbon) are not shouting about their metamorphosis from one of the city’s seven colinas (hilltops). They don’t need to. When it comes to cool, understated is best. 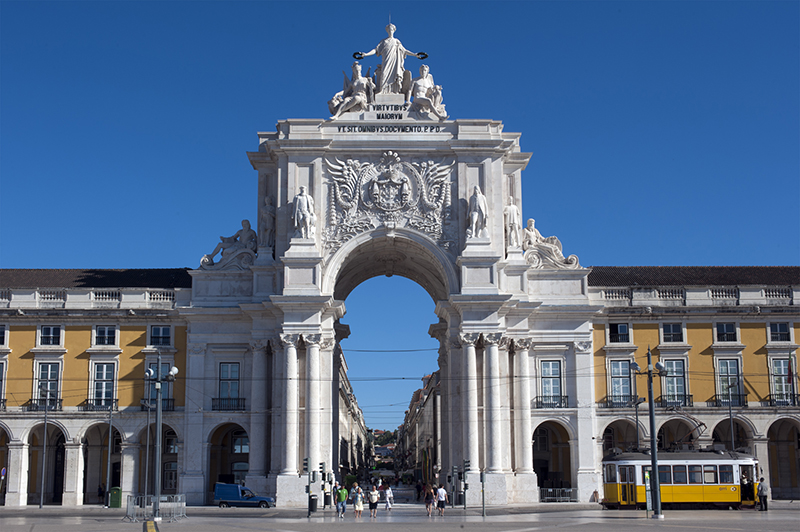 For travellers, however, Lisbon’s choices can be overwhelming, especially if you have limited time. Here’s our guide to help you tap into your inner hipster in a couple of days. And all within a three-kilometre radius of the central ‘hoods of Baixa, Chiado, Bairro Alto, Principe Real and Mouraria. 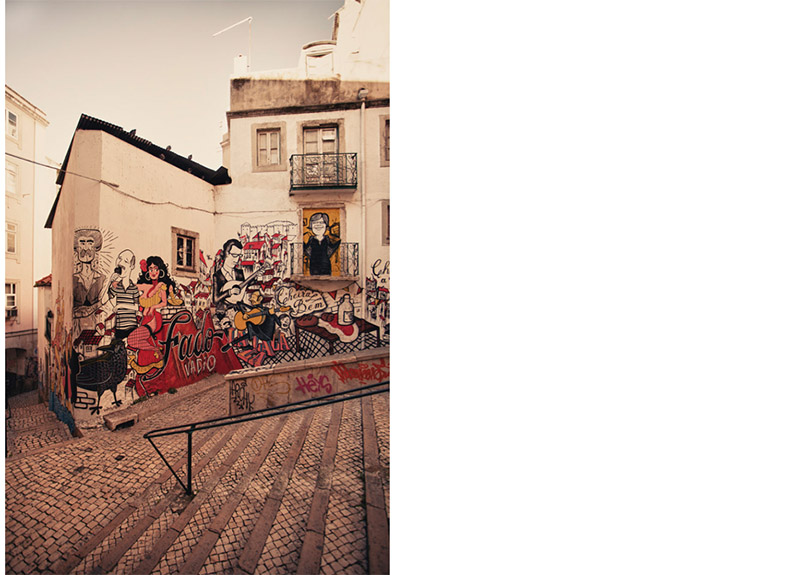 The best way to soak up Lisbon’s vibe is on foot. The urbane, knowledgeable guides from walking food tour group, Taste of Lisboa, lead small parties through a labyrinth of tiny alleys and hidden cafés to provide a fascinating focus on the flavours of foods and Portuguese history. You start in Baixa (literally downtown; it was rebuilt in grid format after an earthquake destroyed much of Lisbon in 1755), before meandering through Mouraria, an historic neighbourhood with traditional houses, terracotta tiles, and street art galore. 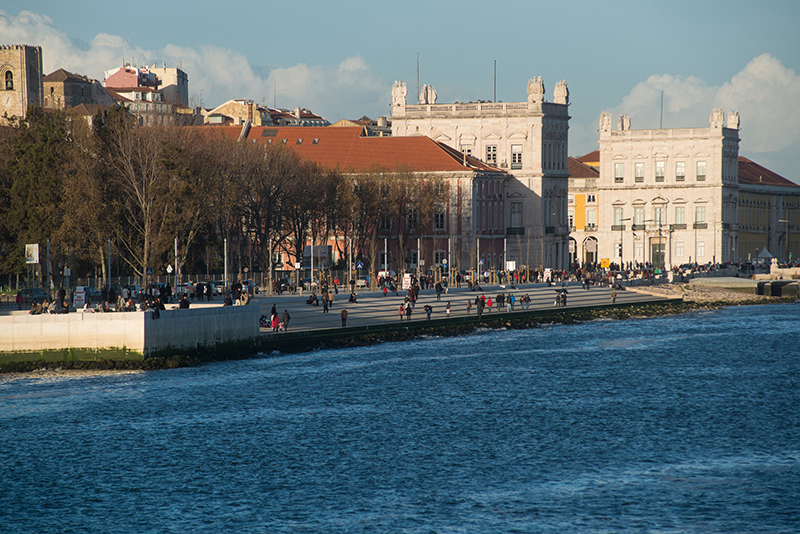 Among other taste tests, you sample cheeses at Mantegaria Silva, a traditional shop with world-class queijos (cheeses), hanging hams, and piles of bacalhau (dried codfish) that are piled high, destined to be transformed into a tasty dish by a home cook or professional chef (the old adage is that there are 365 cod recipes, one for every day of the year, though locals often claim there are many more). Next, you’ll find yourself squeezing into the tiny broom-closet-sized bar, Tasca Os Amigos da Severa, to sip on ginjinha, Lisbon’s cherry (and heavily alcoholic) liquor. At the historic bottle shop, Garrafeira Nacional, you’ll learn how the wine industry in the Douro was revived in the 1800s (after the phylloxera pestilence killed the Portuguese vines) thanks to Portuguese wine matriarch, Dona Antonia Adelaide Ferreira. 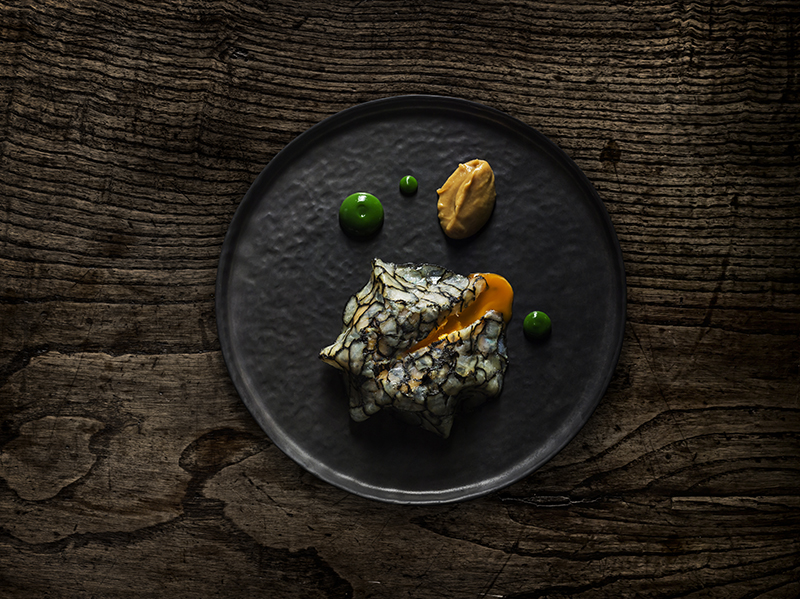 Eating in Lisbon is a serious repast. Despite the explosion of trendy eateries, locals obsess over their Portuguese dishes (think seafood, meat and potatoes), and even the country’s top chefs don’t shy away from their traditional roots. There are enough fabulous restaurants for months’ worth of meals. So, where to experience the best of Portuguese cuisine? It’s hard to go wrong.

The easiest way to enjoy a bite of Lisbon’s many contemporary eateries is to head to Mercado da Ribeira in Cais do Sodré. In line with the creative thinking in Lisbon, this former produce market was regenerated by the artistic visionaries of Time Out Publishing. These days, this buzzy place is a food court that’s lined with food kiosks, all run by high profile chefs who serve up a selection of their signature dishes. 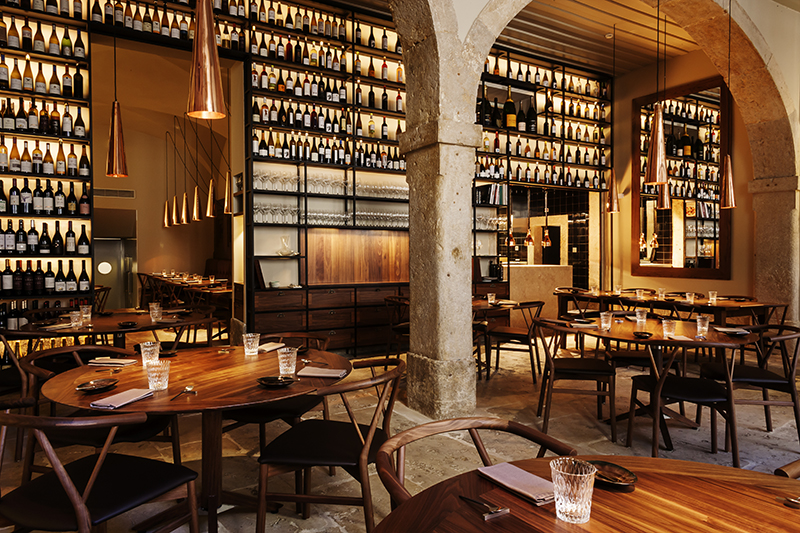 One of the city’s current hot spots includes the stable of eateries run by Chef José Avillez. His smartest restaurant, Belcanto, boasts not one, but two Michelin stars. (Incredibly, it’s often possible to reserve ahead without issues). But his newest eatery and current star is Cantinho do Avillez. Constructed to look like a massive Portuguese tavern, with colourful tiles and an open kitchen, this lively spot serves up fun (you mark off your order with a pencil), and hefty flavours come in the likes of black pork sausage (from the Alentejo region) and veal trotters.

But to understand the soul of Portuguese flavours, secure a seat at Alma, which was awarded a Michelin star in November 2016. The owner Chef Henrique Sá Pessoa is a cookbook author and host of his own TV cooking program. Alma is housed in an 18th-century building that was a former warehouse of the neighbouring Bertrand Livraria, the oldest bookshop in the world. The original stone arches frame a charming dining area that’s filled with contemporary Scandinavian-style tables and chairs. The modern, open kitchen means you can catch glimpses of Sá Pessoa as he works his magic. 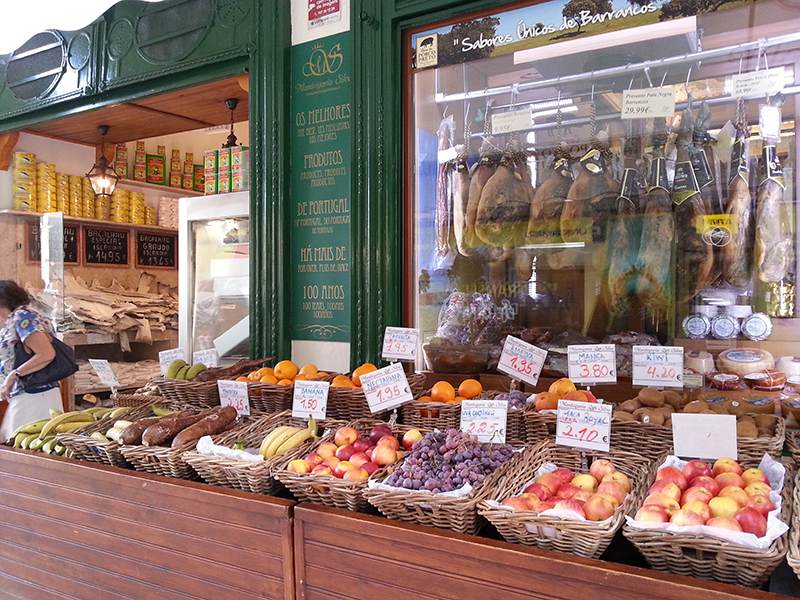 While many of Sá Pessoa’s dishes have Asian touches, his best ones are playful, taking on Portuguese favourites such as Bacalhau à Brás, one of Portugal’s many cod recipes comprising a blend of potato, egg and cod. Sá Pessoa’s own version of this dish, Calçada de Bacalhau, has a deconstructed twist: the potato and egg are encased inside an envelope of cod pieces, so constructed to resemble Portugal’s calçadas, cobbled pavements. You, the diner, mix the ingredients together on the plate (intriguing, fun and delicious). 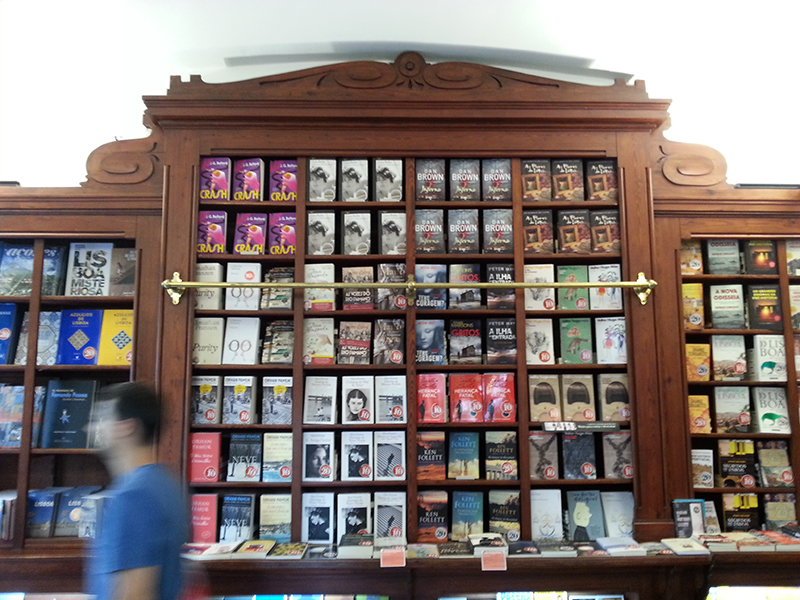 The elegant Principe Real is lined with design shops and clothing boutiques. At its centre is the beautiful green plaza, Jardim do Principe Real. Here, you can sit over a bica (local for espresso) at one of Lisbon’s traditional kiosks, rehabilitated a decade ago by Portugal’s darling of preservation, Catarina Portas. She also runs and owns A Vida Portuguesa. This stunning shop is chock-a-block with traditional Portuguese products that, in part thanks to her commerce, are still fashioned today: Claus Porto soaps, Bordalo Pinheiro’s ceramic swallows, and Encerite wax, which are all worth buying for their funky retro labels alone. 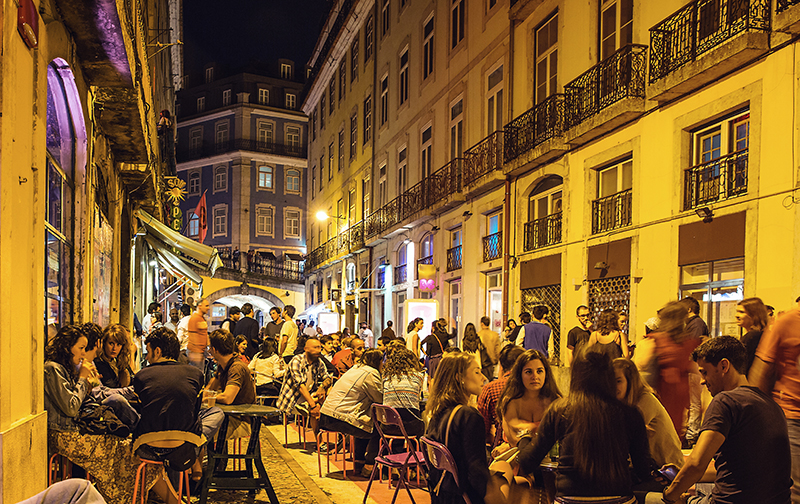 A 20-minute walk south, in Chiado, don’t miss the Loja da Burel (Burel Shop). Manufactured from sheep in the country’s highlands of Serra da Estrela, burel is a felt-like woollen product that was used for centuries by shepherds for warmth and protection from the rain. These days, it’s used in a huge number of contemporary and brightly coloured house décor products, ranging from handbags to cushions (Lisbon’s Microsoft headquarters even uses it in their offices for decorative insulation).

Just north of here, go for a cutting-edge coiff at Facto Hair in trendy Bairro Alto. The scissor skills of talented hair stylist Antony Millard, a former DJ, have made him famous among clients, including Portuguese and international models. 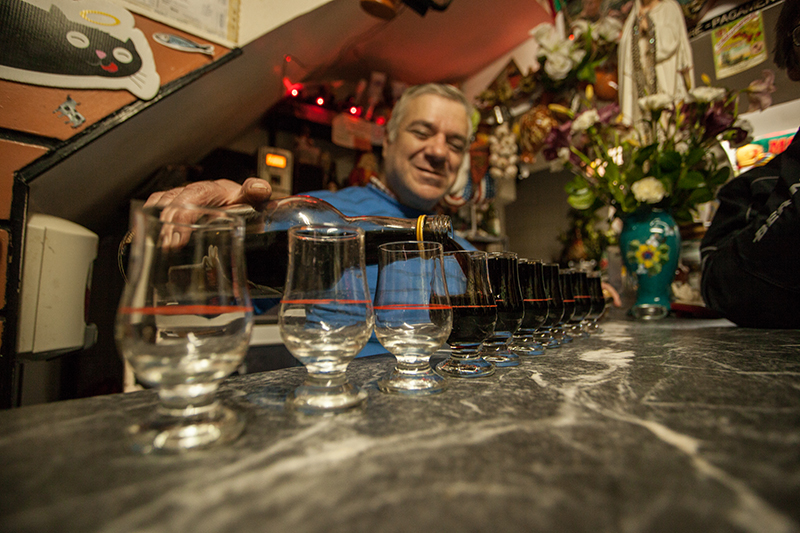 The bar scene in Lisbon is diverse, overflowing and hard to keep up with. Darkened caves with fashionable mixologists. Minimalist wine bars. Boutique breweries. Chic rooftop haunts with a view. Two bars with central locations and rooftop vistas include the elegant Terrace BA, above Bairro Alto Hotel (perfect for a pre-dinner, sunset view over the Tagus River) and Topo. Located incongruously above a shopping centre in Martim Moniz, it’s ‘the’ hangout for a younger, self-assured crowd who flock here for cocktails, views over tiled roofs and the castle, plus the DJs’ sets. Night owls can party with the younger hoards in the grungier Pink Street, located in Cais do Sodré, where drinking dens have lined the streets for centuries, ever since sailors used to hit the bottle after their voyages. 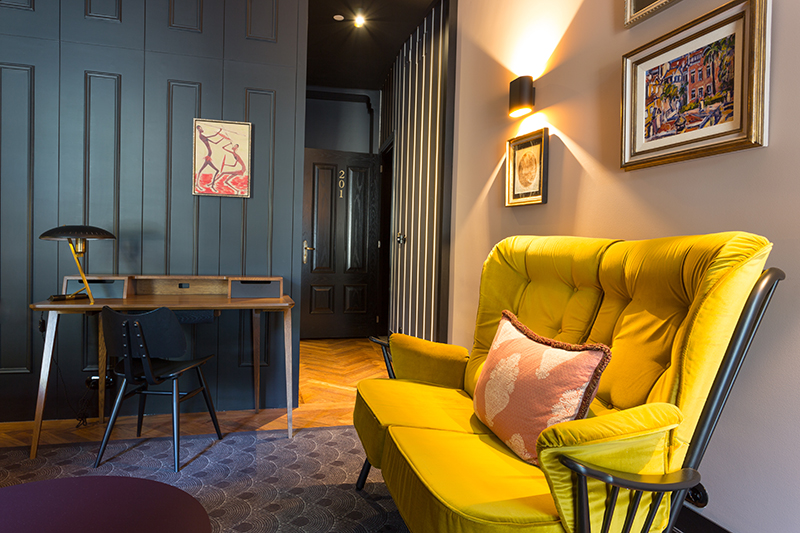 As with the bar scene, Lisbon sees weekly openings of B&Bs, boutique hotels and poshtels (glamorous hostels). Those at the pointier end of the price scale deliver, albeit following a cookie-cutter design approach with eclectic interiors and designer lighting. The discreetly luxurious Hotel Valverde Lisboa has a refreshingly different atmosphere. Its rooms are individually decorated with textured fabrics, mid-century decor and fashionable objets d’art. You can grab a poolside seat in its garden, a stunning oasis. It’s located on the beautiful, tree-lined Avenida da Liberdade, Lisbon’s historic avenue that was built by the Marquis of Pombal mid-18th century to emulate Paris’s boulevards. 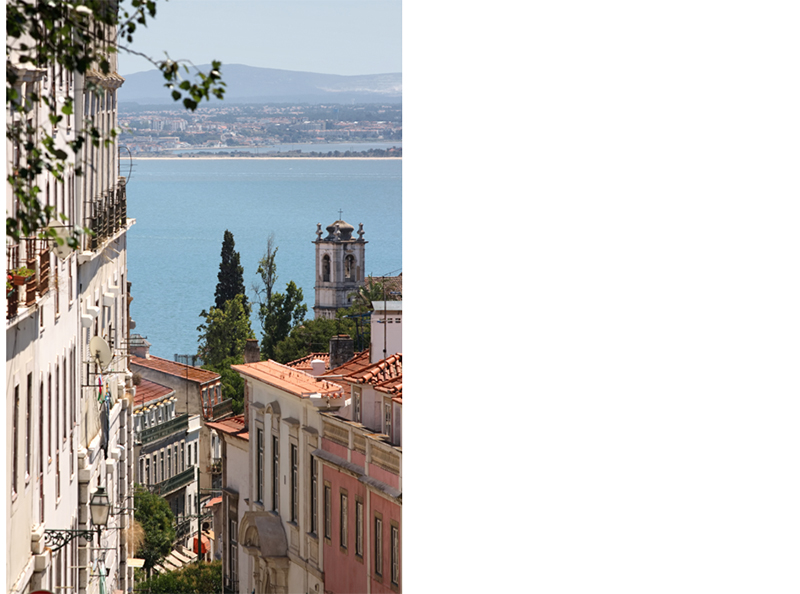 But for location, it’s hard to go past Hotel do Chiado. One of the first contemporary hotels in Lisbon, this charming, historic building is perched on a hill that straddles both the Baixa and Chiado neighbourhoods. Rooms are minimalist and spacious and, what they lack in furniture, they make up for with a fabulous buffet breakfast and roof bar, Entretanto, that affords vistas to the São Jorge castle. 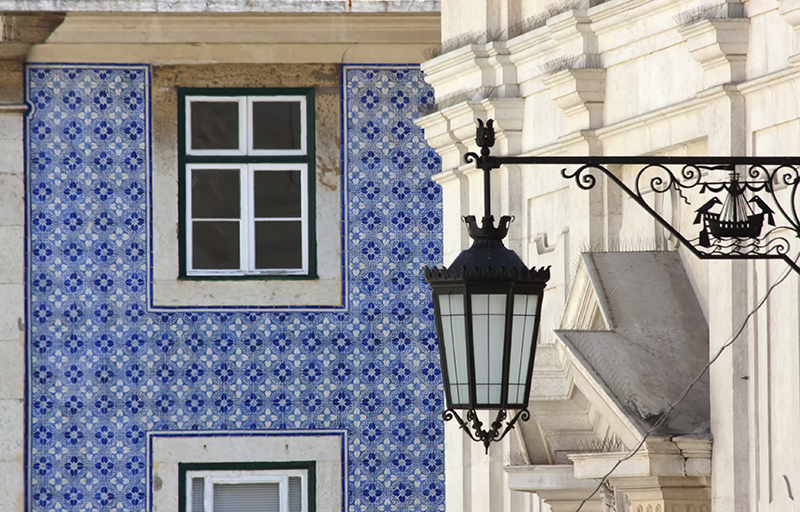 While Lisbon serves up fabulous funky fun, first time visitors shouldn’t ignore Lisbon’s traditional attractions and guidebook ‘must-dos’; munch on a custard tart at Café Antiga Confeitaria de Belém, jump aboard the number 28 tram that trundles up and down the gorgeous alleyways of historic neighbourhoods, and attend a fado performance.  •

Photography by Taste of Lisboa and @visitlisboa.com 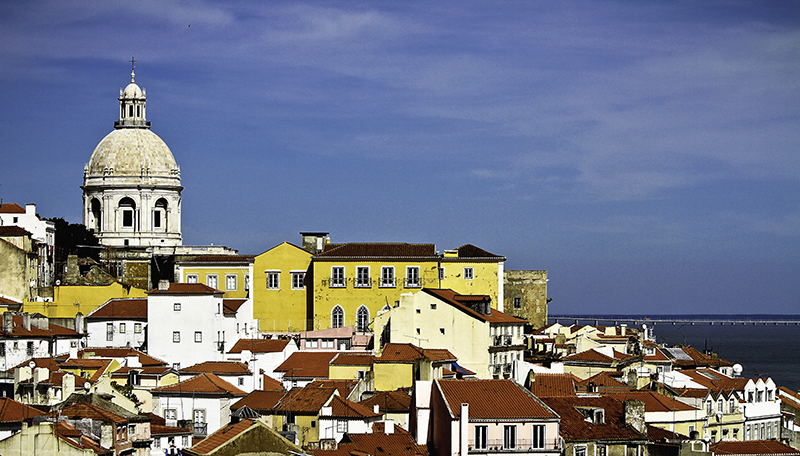 Fly Qantas to Dubai and onto Lisbon with Emirates. qantas.com; emirates.com

When to Go
Any time except July and August when the locals leave and the tourists descend.

Where to Stay
• Valverde Hotel: valverdehotel.com
• Hotel do Chiado: hoteldochiado.pt/en/

Where to Play
• Taste of Lisboa: tasteoflisboa.com
• Facto Hair: factohair.com