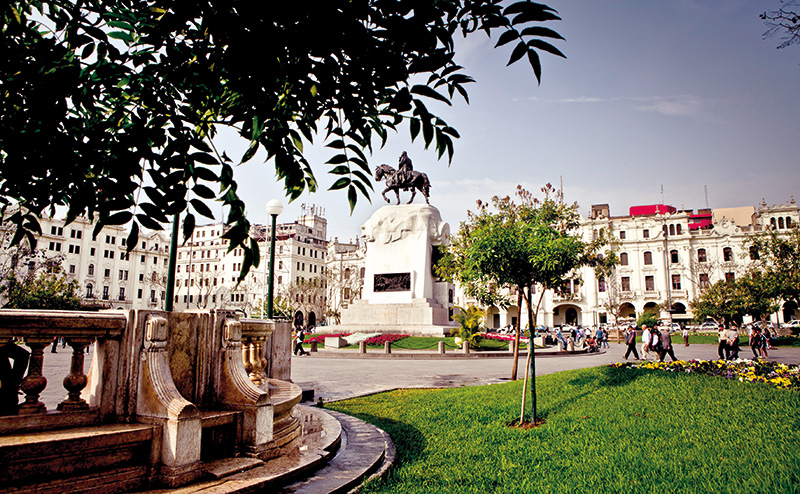 ‘If I’m going to eat guinea pig, it may as well be in one of the world’s best restaurants.’ It’s the first thing that comes to mind when chef Mitsuharu Tsumura greets our table and asks if there is anything we would rather not eat before starting our degustation at Maido.

Creatures I’ve never consumed before may be on the menu but Tsumura prefers to let the dishes speak for themselves, revealing what we’ve eaten after we’ve tasted it with an open mind. While presenting the river snail in a large snail shell was a bit of a giveaway, the remainder of the 15 courses are largely a mystery, and so it is that I eat my first mouthful of guinea pig. In a gyoza. With an Amazonic ponzu. I didn’t see that one coming.

Considered one of South America’s best restaurants, last year Maido made its first appearance on the World’s 50 Bestat number 44. The restaurant serves the Japanese-Peruvian fusion of Nikkei food, and at first looks like a lot of other Japanese restaurants around the world. Simple wooden tables, stools at the sushi counter. Except for the ropes hanging from the high ceiling, mostly natural coloured with some reds in the mix. Look into one of the mirrors around the room and they create a Japanese flag. Look into another and you see the Peruvian flag. A clever and stylish nod to Nikkei culture that also helps the acoustics in the room.

After travelling for 26 hours from Sydney via New Zealand and only having time for a quick shower before coming to the restaurant I had wondered if going out to dinner was a wise choice. Soon I was grateful I hadn’t opted for room service and sleep.

The dishes not only taste divine, they are beautifully presented. Crispy chicken skin snacks arrive in woven baskets rising from boxes filled with moss, succulents and strange twisted plants that look like they belong in a Dr Seuss book; other dishes arrive nestled in large pebbles and cacao shells. 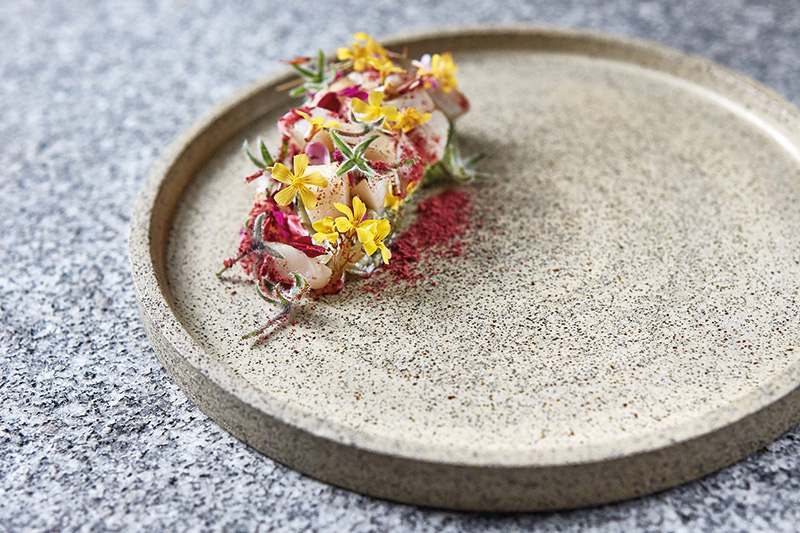 Tsumura is warm and clearly loves talking about his ingredients, all of which, except the miso, are sourced in Peru. When a bright pink smear on a plate turns out to be from one of the 3,000 or so kinds of potato they have in the country, Tsumura brings one out from the kitchen and cuts it in half so we can see the pink inside the dark skin.

By the time we leave, I know this is the best first meal in a country I’ve ever had. The bar has been set high, but Lima is up for the challenge. It wasn’t always this way. There was a time when travellers would return from Peru with tales of archaeological wonders, stunning scenery and friendly people. The restaurants they ate at rarely rated a mention.

Today, Peru is a gastronomic mecca and Lima is its capital in more ways than one. Chef Gastón Acurio has been credited with the start of Peru’s culinary revolution. After meeting his German wife and fellow chef Astrid Gutsche in France, the pair opened a French restaurant in Lima.

Within a year Acurio realised they were doing something wrong with their classical French approach and started playing with local flavours. It was when he decided to focus on local ingredients and modern takes on traditional Peruvian meals that he changed the game.

Today Acurio is a national hero. He has dozens of restaurants around the world, his own TV show, has written more than 20 books and runs a culinary school for underprivileged youth. In Lima, Acurio’s flagship Astrid y Gaston is now found in a 300-year-old hacienda in the San Isidro district, where the fine dining restaurant is joinedby a more casual bar and restaurant, botanic garden and event space.

After we spend some time exploring Peru, we return to Lima, where having just flown in from the Amazon, Pedro Miguel Schiaffino’s Malabar was the perfect choice for dinner. Schiaffino’s menu is sustainably sourced from the Amazon, where he works with farming co-ops to find unusual ingredients harvested in non-intensive ways.

I soon discover Schiaffino is in Tambopata, which is where I woke up that very morning, but we are in good hands in Lima with his chef Santiago Vidal. From the prettily plated fish tiradito with fermented yucca juice, cucumber, pimpinela and green tapioca, to our smoked pineapple, masato and caramelized plantain sorbet dessert, every dish is a new experience for my taste buds. I’m told not even locals have heard of some of the strange roots, fruits and sea creatures Schiaffino serves, so don’t feel bad when they’re new to me. 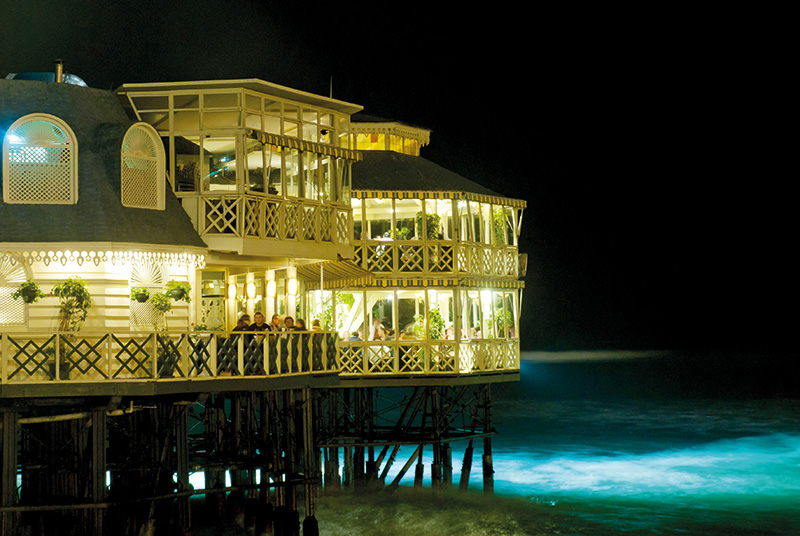 The next day, we wander through the fashionable Miraflores and Barranco districts where Mario Testino’s museum MATE can be found, before going for lunch in one
of Testino’s favourite spots, La Rosa Nautica.

Found at the end of a pier that was built just for it, La Rosa Nautica is so romantic I’m not surprised to hear it’s popular for proposals. The Victorian gazebo style dining rooms are charming and I love listening to the sounds of the waves crashing both under and beside us as we dine on ceviche and other traditional dishes.

As a fan of ceviche, I also welcome the chance to do a cooking class at the nearby El Senorio de Sulco. Here, chef Ricardo Cornejo explains it takes 50-60 kilograms of limes a day to prepare all of the ceviche they serve in the restaurant, and is visibly shocked when we share the price of a kilogram back home.

I also discover why the sweet potato I’d been eating with ceviche in Peru is so delicious: it’s soaked in orange juice. Sometimes Fanta. A trick I have yet to try at home.

After so many memorable dining experiences in Peru, our last night had to be something special. And so it is that we arrive at the number one restaurant in South America, Virgilio Martinez’s Central.

Claiming fourth place on The World’s 50 Best last year, Central is a vertical culinary journey that celebrates the extraordinary range of ingredients that can be found around the country. 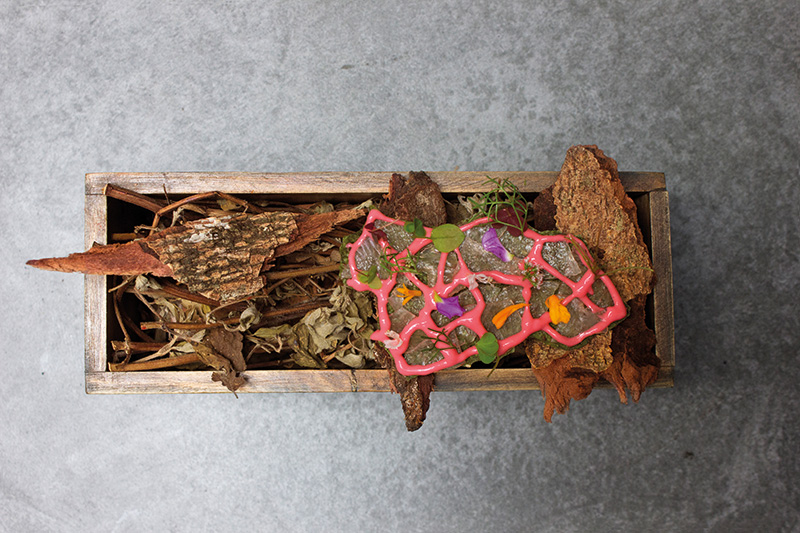 Peru has 30 of the world’s 32 climates, a rich biodiversity and access to some of the world’s best fishing grounds, and it’s this complexity that inspires Martinez’s menus. Here, courses are called ‘elevations’ and each one is based on the altitudes the native ingredients have been sourced from.

Throughout our 17 elevations, the altitudes range from the ‘Close Fishing’ octopus and coral sourced from -10 metres up to the ‘Andean Plateau’ of tunta, annanto and black herbs from 3,900 metres.

Martinez delivers the first course himself, greeting the table and chatting about Sydney. When complimented on the restaurant space, which features an open kitchen behind glass and a large tree trunk in the corner of the room, Martinez explains that his mother is the architect and that the branches of the fruit tree can be seen on the floor above.

The dishes are works of art, each one presented in a different way. A large blue plate broken into four quarters is rearranged in front of our group of four diners, each quarter holding our own morsel of marvelousness. Strange plants frozen into a block of ice carry edible rolled leaves topped with flowers to our table.

The flavour and texture combinations are unexpected, with the Diversity of Corn dish (180 metres) of corn, honey, pacae and tumbo passionfruit coming in three parts, toasted corn kernels, a tangy corn liquid and a crunchy crisped corn ring around the top of the cup. When one of my fellow diners laughs and says ‘my mouth doesn’t know what’s happening!’ all I can do is nod in wide-eyed agreement.

A quinoa beer and pisco cocktail make an unexpected but welcome appearance in the wine pairing, and throughout the meal there is only one element of an elevation that isn’t a hit. 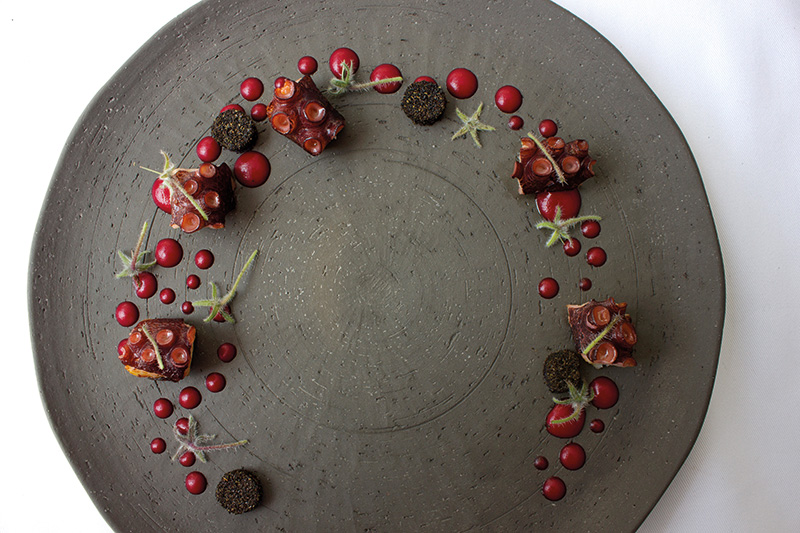 The smoky coco-leaf bread rolls in the Andean Plateau smell a bit too close to tobacco for most of my table, and I notice diners at other tables also fail to show them much love. As pungent as they are, I discover they don’t taste as bad as I expected, but with so many elevations to go, I decide to save stomach space for the things I love.

As Martinez moves around the restaurant charming diners. he notices me slow down around the 11th course. “Don’t worry, I won’t be offended if you can’t finish,” he smiles, and I smile back, knowing no matter how full I am there is no way I’m not tasting everything that comes out of his kitchen.

My trip to Peru started with my best first meal in a country and thanks to Central it also ended with a personal best. These are records that are going to be very hard to beat. •

Photography by Promperu and various establishments.

WHERE TO STAY
The Belmond Miraflores Park Hotel is in the heart of the Miraflores district and easy walking distance to some of the city’s best restaurants including Central: 1800-217-568; belmond.com
Libertador Hotels, Resorts & Spas; libertador.com.pe

WHEN TO GO
Lima’s climate is mild to warm throughout the year with temperatures rarely falling below 14°C or rising above  29°C. Peak tourist season is May to October  with July and August the busiest months for visitors.