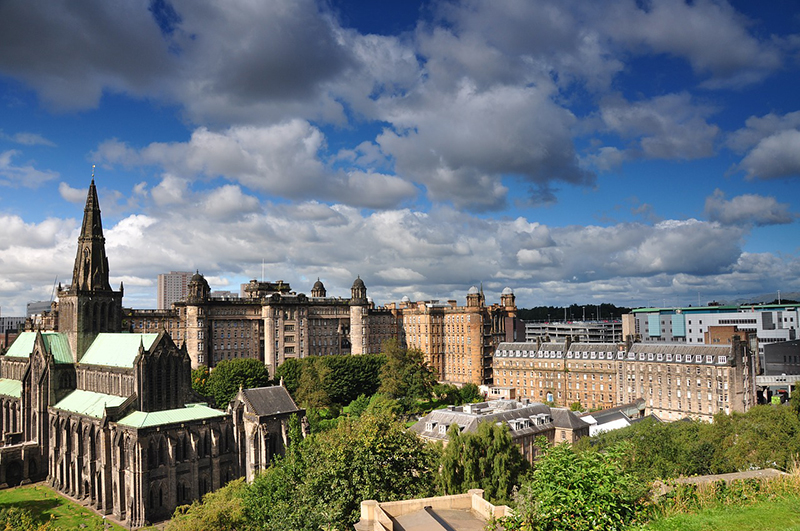 Many Australians proudly claim a wee dram of Scottish ancestry. Chances are, many can trace their roots to Glasgow. The legacy lingers in great grandma’s cherished recipes for fruitcake, marmalade, and other goodies – then there’s banking, business acumen, shipbuilding, engineering and a wicked wit (think Billy Conolly).

While art and architecture may not be front of mind for some visitors to Glasgow, they should be. Powerhouse Glasgow, second city of the Empire – and wealthiest city after London, has an enviable history in the arts. This year, the city’s architectural heritage will be very much on show. 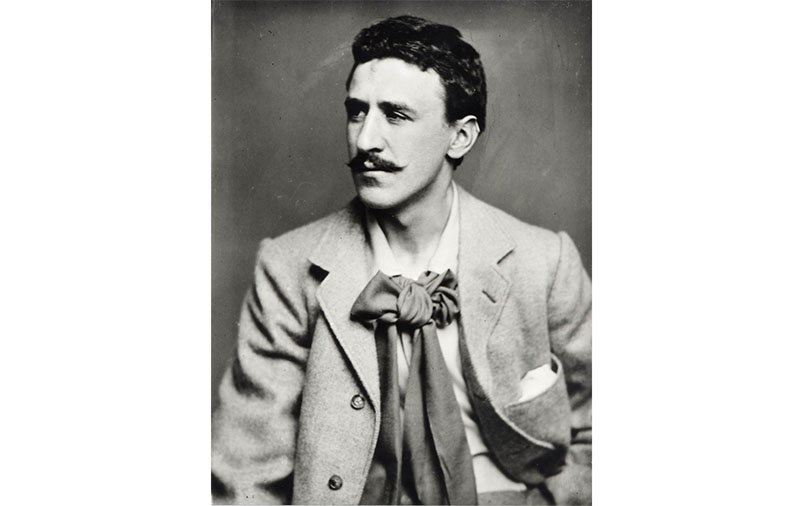 Throughout 2018, Glasgow is celebrating Mackintosh 150 – the 150th Anniversary of the city’s famous son – Charles Rennie Mackintosh – architect, artist, designer and principal creator of the Glasgow Style. Events, seminars, tours and exhibitions will shine a light on this creative genius who is acknowledged as one of the most influential figures of the 20th century in Scottish Arts and Crafts, and as Britain’s most important contributor to the international Art Nouveau movement. 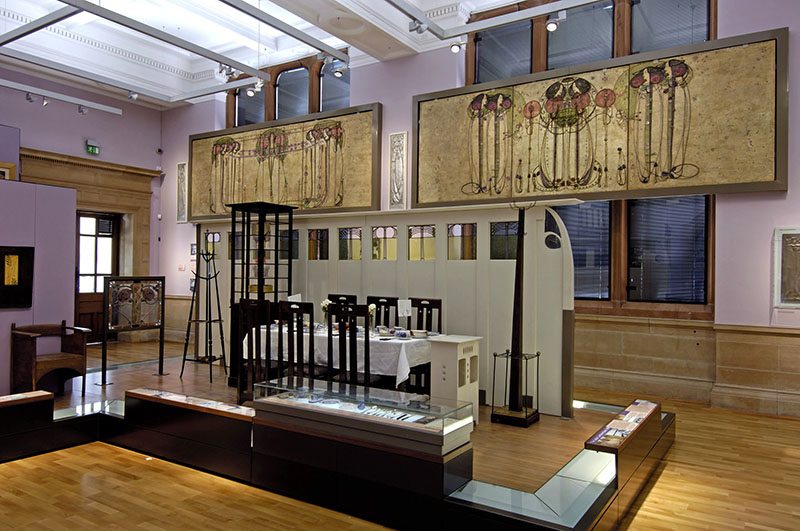 He was pronounced ahead of his time when his work was exhibited in Vienna’s Secession Movement in 1900, then Turin in 1902. It was not just his buildings, it was his elegant furniture – much of it Japanese- inspired, his textiles, stained- glass, and even cutlery. Such was his influence, Austrians and Germans became a steady stream of art and design pilgrims to Glasgow intent on exploring his work. Chances are, you too may have seen some of his creations without knowing – in TV programs such as Star Trek, Dr Who, and films American Psycho and Blade Runner. 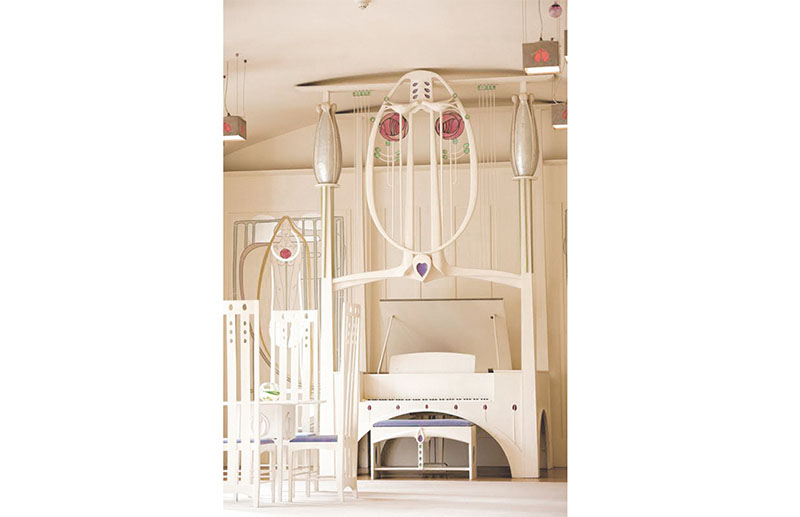 Although in some quarters Mackintosh may have been a household name, to a wider audience, fame came late. An example is one of the city’s most beautiful buildings, House for an Art lover, which was built almost 100 years after his award-winning designs were first submitted to a German magazine in 1901. 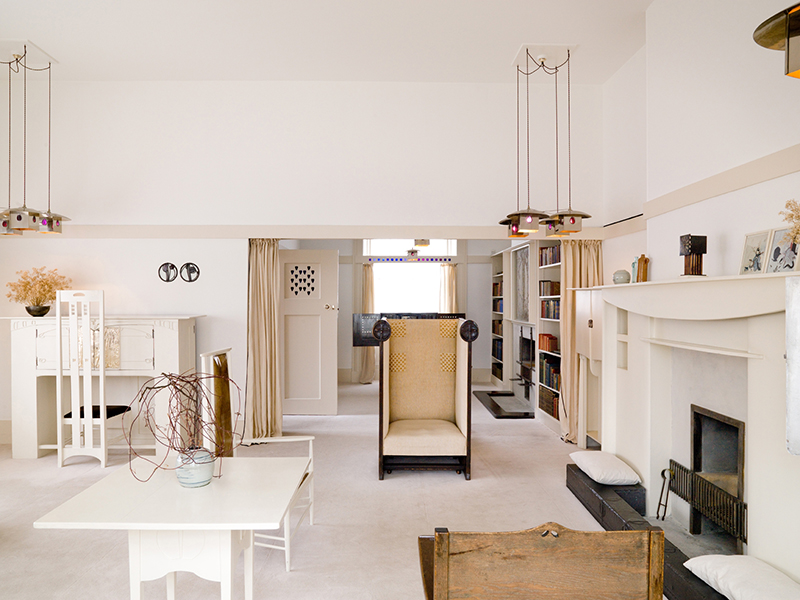 Set in Bellahouston Park, the house – built as recently as 1996, is surrounded with carpets of spring bulbs, tulips and graceful trees. The dazzling light-filled interiors exhibit elegant white furniture that many of us would covet today. (Don’t miss the delightful café and gift shop with captivating Mackintosh design inspired merchandise. House for an Art Lover is also a lovely venue for weddings and special events)

Mackintosh’s buildings, geometric interiors, and linear furniture are universally recognisable, as are the recurring, sensual rose motifs. He and his wife, artist Margaret MacDonald who worked as a duo, were both influenced by Japanese Art, Celtic imagery, Arts and Crafts, and borrowed extensively from Gothic and Scottish Baronial designs. 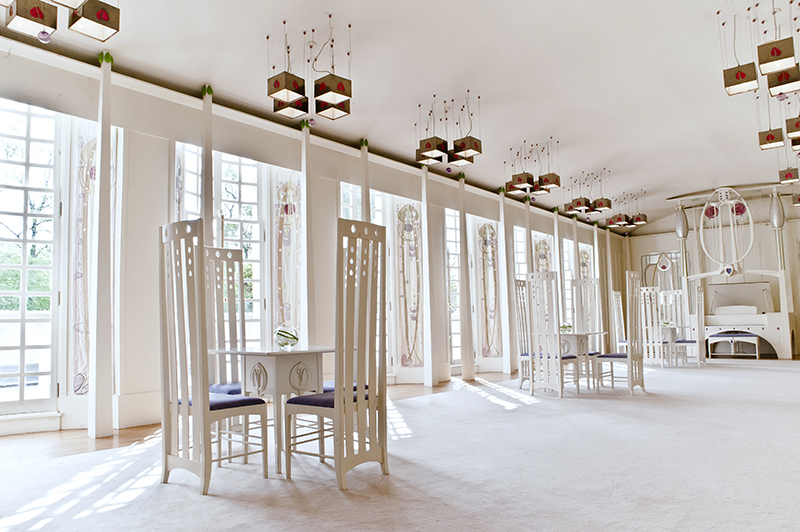 To see how they furnished their own home, head to the Hunterian Art Gallery which incorporates a complete reconstruction of the Mackintosh’s original house, its serene interiors and extraordinary furniture. More examples of their work can be seen at the magnificent gallery Kelvingrove, which will host a big show examining the interplay between “The Four” –  Mackintosh, wife Margaret MacDonald and sister Frances, and his brother-in-law Herbert MacNair and their collective contribution to the Glasgow Style. 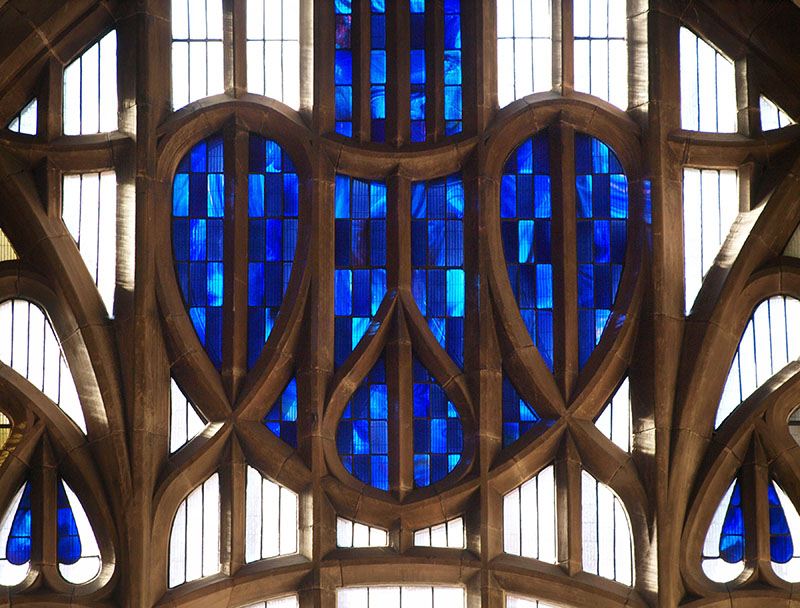 On display will be a full spectrum of the very best Mackintosh works including never-before-seen items: ceramics, embroidery, mosaics, metalwork, graphics as well as Margaret’s luminous gesso panels and the distinctive high-back, Japanese-inspired chairs often used in Tea Rooms designed for Mackintosh’s patron Miss Cranston. Mackintosh was a prolific designer of tea rooms, and the famous Willow Tearooms on Sauchiehall Street which have recently undergone restoration will be known as Mackintosh at the Willow and will open on his birthday, 7 June. Meanwhile, the largest of Miss Cranston’s Ingram Street Tearooms, unseen for 50 years, is the Oak Room. It is currently being conserved and will open to the public in the new V&A Dundee Scottish Design Galleries in the second half of 2018. 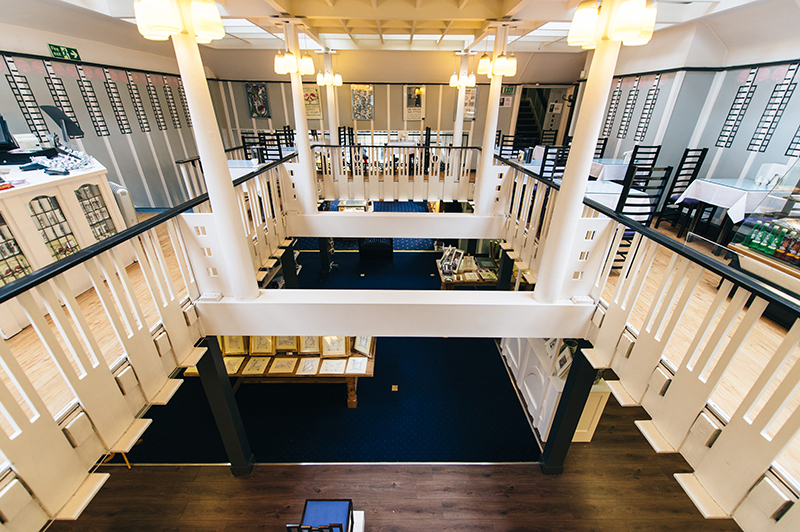 Perhaps his greatest oeuvre is the Mackintosh-designed Glasgow School of Art where he was once a student. In 2014 it fell victim to a devastating fire which destroyed the library, but fortunately much of Mackintosh’s original furniture was saved. The Mackintosh building is now in its final stages of restoration and in 2019 will give the public exclusive hour-long guided tours behind the scenes of this famous building and working academic institution. 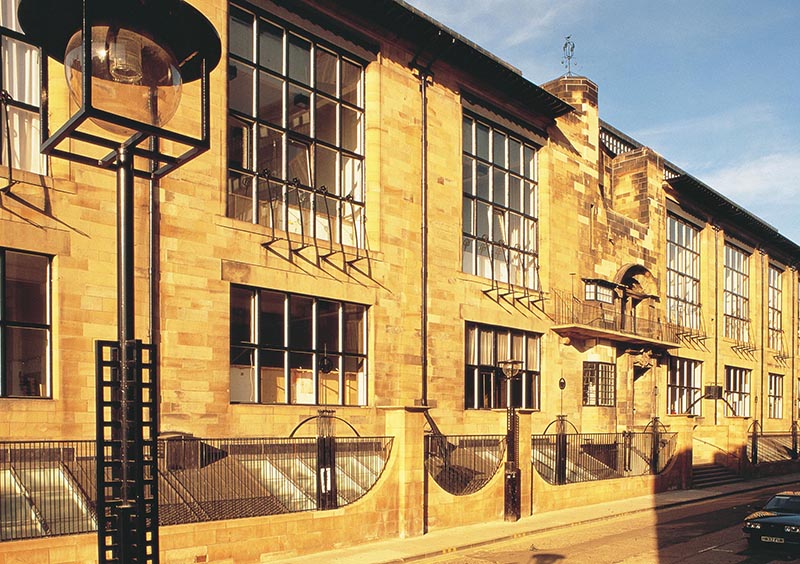 Perhaps most evocative of all Glasgow’s buildings integral to the city’s powerful art scene is the Glasgow Art Club. Mackintosh was no doubt its most famous member. Contributing to the ambience of the period interior is his much-admired frieze.

By now, you will be satiated but stimulated by the fabulous galleries and institutions Glasgow has to offer, so now it’s time to play.

The city has an exceptional food scene, fashionable bars, fabulous shopping, sport and entertainment. And in case you’ve forgotten – Art! • 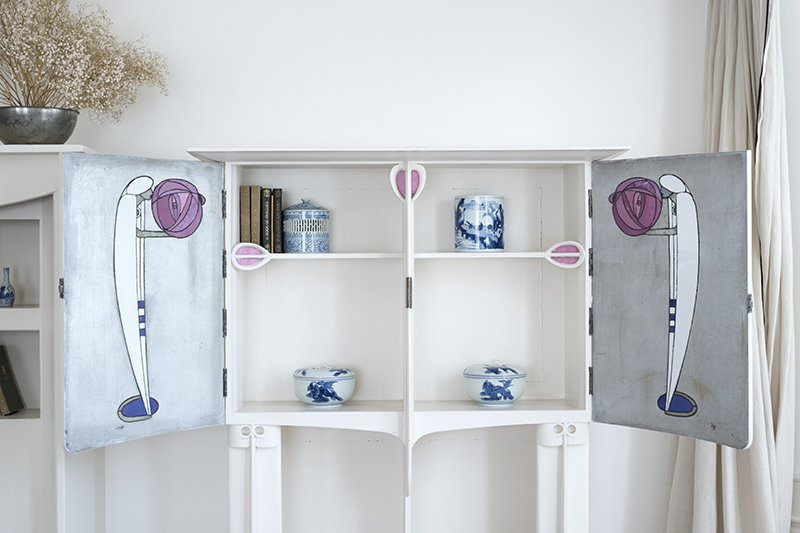 Travel Tips
Trace your Family Tree. Bring your birth certificate and head to levels two and three of Glasgow’s Mitchell Library where you can unearth your family roots.
glasgowlife.org.uk

Visit
• The Lighthouse – Scotland’s Centre for Architecture, Design and the City houses a permanent exhibition of Mackintosh’s work seen in its historical context.
• Other Mackintosh-designed buildings are the Scotland Street School, Queen’s Cross Church and Hill House, Helensburgh.
• Fairfield Heritage and Govan Workspace tells the compelling history of shipbuilding on the Clyde. 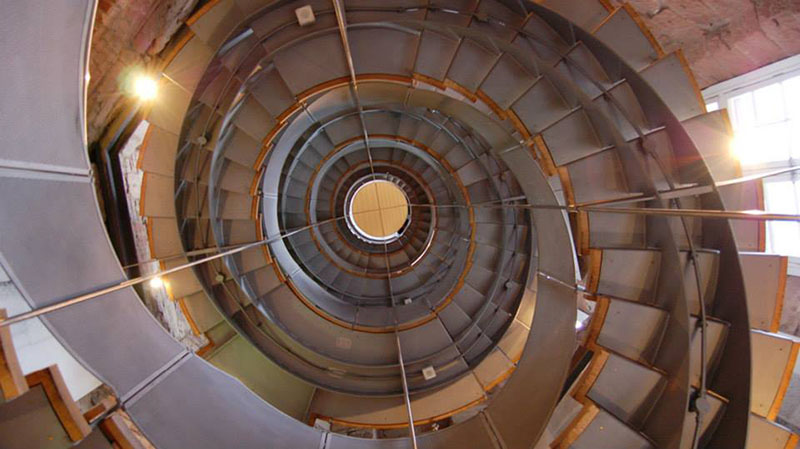 Where to eat
The Western Club, for contemporary fine dining in a refurbished gentlemen’s club.
The Gannet, housed in an atmospheric 108-year-old tenement building in Finnieston features ingredients from sustainable sources.
The Ubiquitous Chip – a Glasgow favourite focusing on regional cuisine in a courtyard setting.

Explore the city
On the Glasgow City Sightseeing hop-on-hop-off Bus.
Riverside
The Transport Museum has an amazing collection of locomotives, trams, horse-drawn vehicles and more.