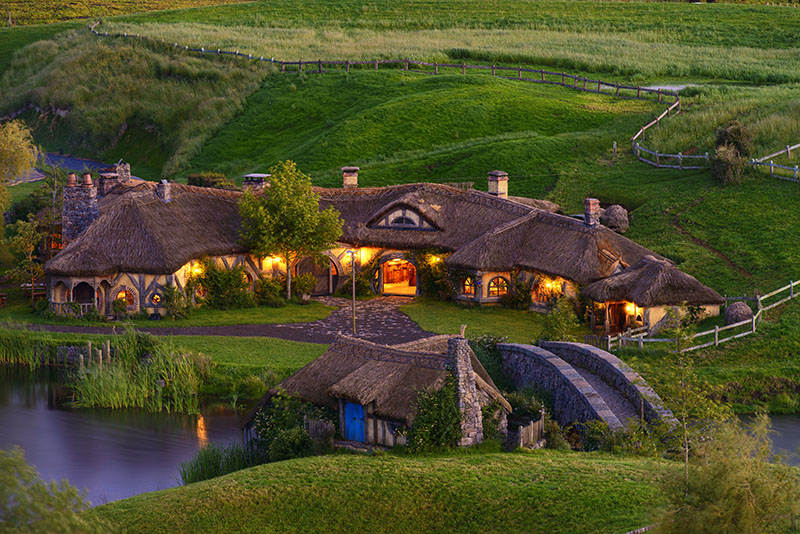 The sun is shining on The Shire and I’m happy. It’s late afternoon and the crowds have thinned out.

It’s been raining for almost a week and while New Zealand can look moody under misty skies, I don’t want my little adventure to be reduced to an arduous traipse over muddy hills with a bunch of folk carrying umbrellas.

The Shire, according to Tolkien, is a “small but beautiful, idyllic and fruitful land”; a place loved by its inhabitants – those hairy-footed, pipe-smoking men (and women) who stand no more than four-foot high. Tolkien used Imperial measure but for the metrically-inclined, that’s just 1.22 metres.

Today’s visitors, my fellow travellers, are well past loving The Shire. They’ve come from far and wide – from Europe, Asia and North America – to worship at the shrine, or more precisely, at 44 Hobbit holes. 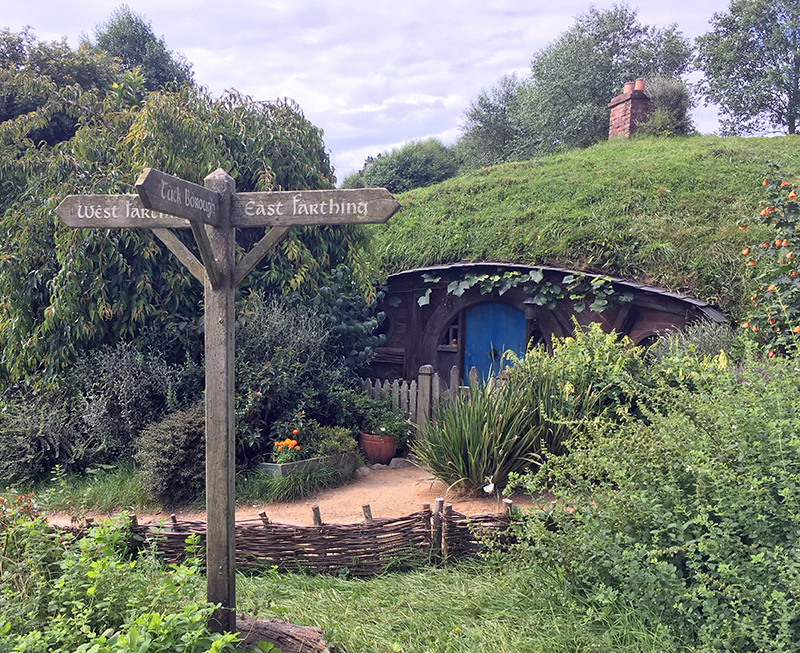 Hobbiton, the movie set built by director Peter Jackson to recreate that blissful rural landscape in The Lord of the Rings (LOTR) and The Hobbit movie trilogies, is nirvana for hundreds of thousands of devoted Tolkien and cinema fans.

I’ve seen the entire Lord of the Rings franchise and the first instalment of The Hobbit trilogy but I wouldn’t know one hobbit hole from the next or be able to remember scenes of Bilbo Baggins running down a certain pathway or Gandalf, the wizard, bumping along in an ox-drawn cart.

But my fellow film fans can and they emit squeals of joy when our tour guide stops at certain places, along the hedge-lined paths, to tell us what happened at that exact spot in one of the movies. 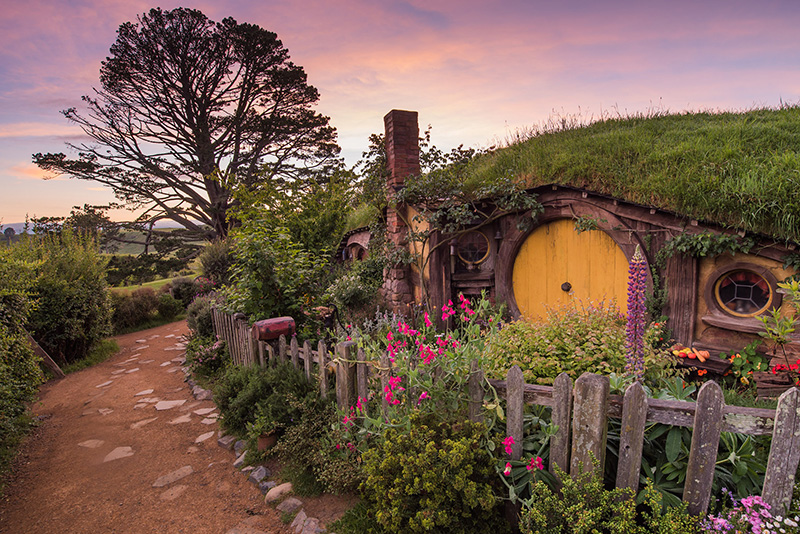 It’s hardly surprising that Hobbiton, painstakingly-built on a portion of privately-owned sheep and dairy farmland just a little south of the North Island town of Matamata, is a huge hit with fans. J.R.R. Tolkien’s books – both The Hobbit and the LOTR trilogy – have sold more than 100 million copies and been translated into more than 40 languages. And Jackson’s movies, released from 2001 to 2014, have been devoured by them and also found a whole new band of followers.

I’m booked on the 4pm tour in mid-February and this turns out to be a smart move as the hordes tend to come earlier in the day. After a rainy weekend, the sun is out and I’m ready to be transported back to the 17th century of the Third Age, that imaginary time when Tolkien’s works are set.

Hobbiton itself dates back to 1998 when Peter Jackson spied the 550-hectare farm on an aerial search for location sites. His scout contacted the farm owners, the Alexanders, and despite a bit of initial reluctance on their part, the plan was set in motion. 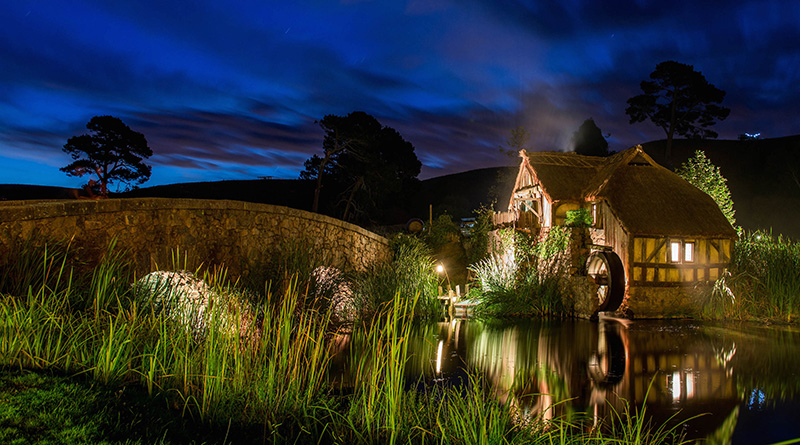 Building began in March 1999 when the New Zealand army arrived to clear the site (the soldiers later played ‘orcs’, fearsome humanoid warriors, in the films) and the three-month filming schedule started later that year. The scenes shot during that period were used in the first and third instalments – The Fellowship of the Ring (released in 2001) and The Return of the King (2003).

Jackson chose the site for its verdant rolling hills, the absence of power lines and roads and a huge pine tree in the middle of a field. That pine perfectly fitted the bill as the ‘party tree’ around which hobbits gathered for celebrations.

That first film set was made of temporary materials only – 7mm plywood and polystyrene. 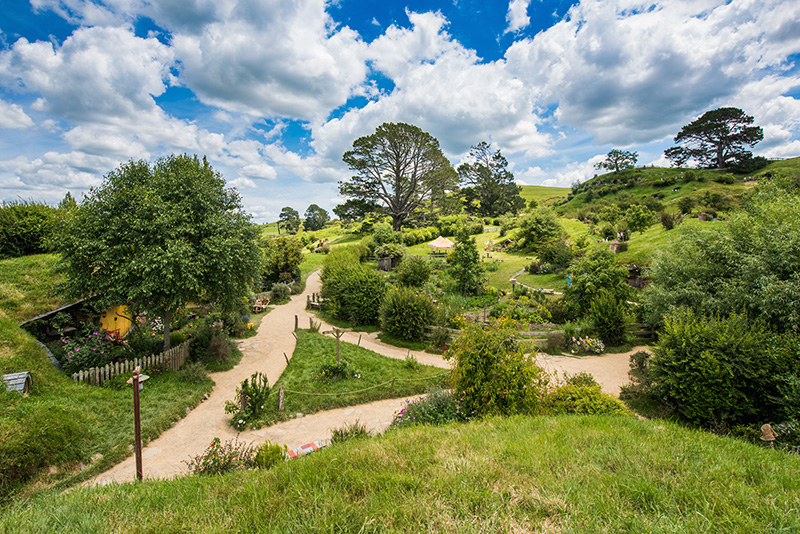 What I’m about to explore is the second movie set, reconstructed in 2011 of vastly more durable materials, built when Jackson decided it was time to start filming the eagerly-awaited The Hobbit trilogy.

Lord of the Rings location tours have been popular in New Zealand from the time the first movie was released. The Alexanders had run their own tours on the farm-turned-film set from as early as 2002, while across the country fans tramped over tracts of countryside from Taupo to Queenstown seeking out the famous landmarks that Jackson chose as Tolkien’s fantastical land of Middle Earth.

However, the opening of the permanent Hobbiton in 2012 has given fans a place of pilgrimage and the Alexander family a serious cash cow. 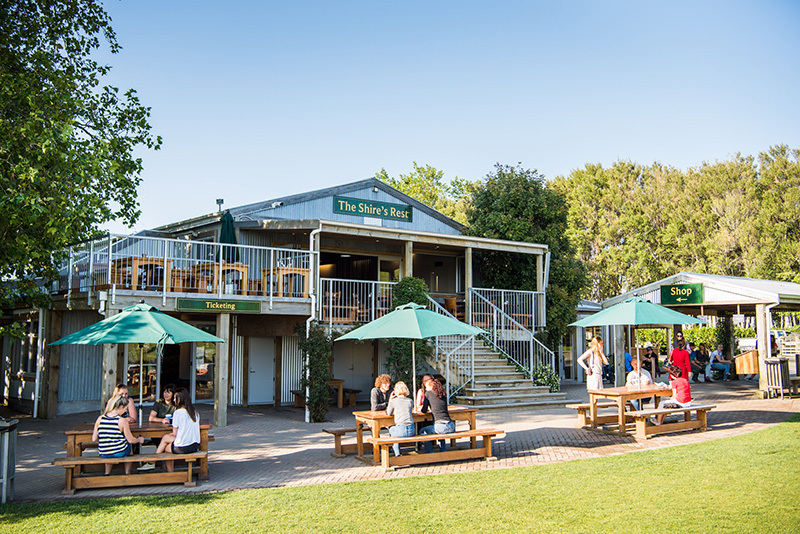 My tour participants gather at the Shire’s Rest, a café and shop at the entrance to the film set and then board the special Hobbiton bus. We drive for 10 minutes, watching a short video introduced by farm owner Russell Alexander and Peter Jackson, along with a couple of movie clips.

On arrival, we’re ushered through a little village gate onto a stone path and within no time, there’s a blue-doored hobbit hole to our right. My fellow travellers are in heaven and yes they remember exactly where that hobbit hole fitted into the movie. At a fork in the road we hear that that was the place where Frodo ran to meet Gandalf and my companions are all nodding in acknowledgement. I am with Lord of the Rings diehards – a multi-national group from France, Holland and three adult siblings from Canada. In fact, I learn that Hobbiton is the New Zealand site most visited by international travellers. 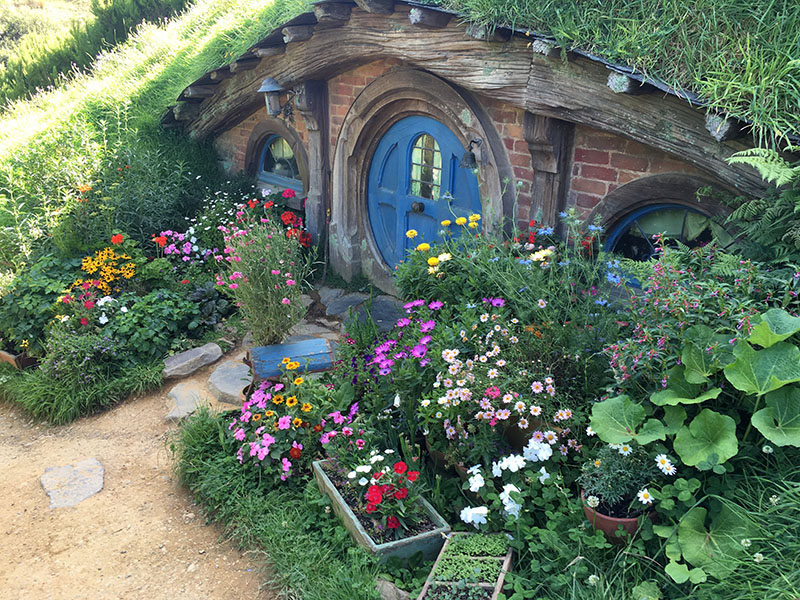 And it is seriously cute. There are 44 hobbit holes in total, with brightly coloured doors, real vegetables and flowers growing in gardens, lichen-covered picket fences, clotheslines of short-person’s washing flapping in the breeze, orchards, a lake and faded signposts. But there is one trick and our guide alerts us to a majestic-looking tree growing on a hill above a hobbit hole – the home of Bilbo Baggins, the protagonist of Tolkien’s first book.

Ever the perfectionist, Jackson wanted an exact likeness to the literary tree that sits at Bag End above Baggins’ house. None was available, so he had it especially made and each leaf was individually painted! The attention to detail is amazing, even to the point that Jackson had the farm’s apple and pear trees stripped of their fruit and decorated with artificial plums in keeping with the plum tree in the story. 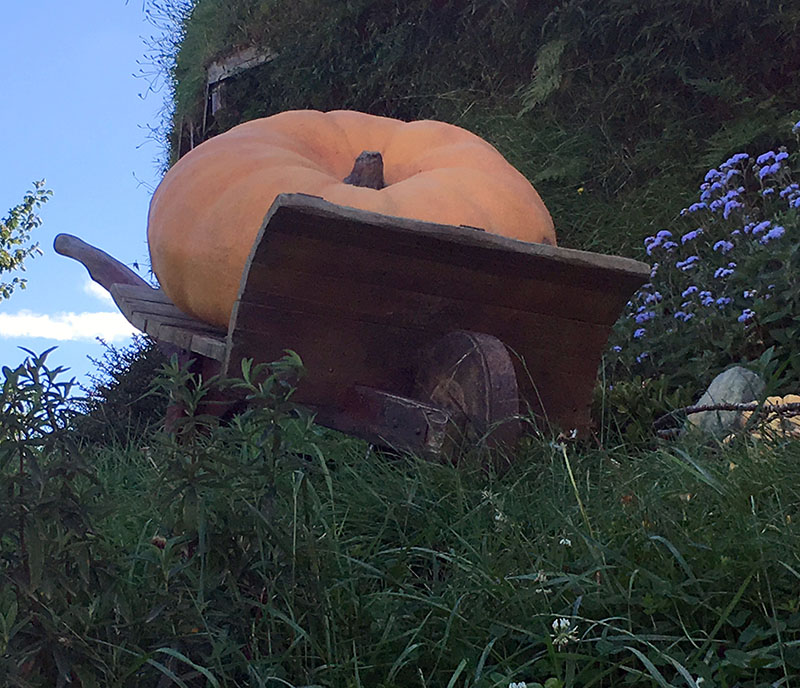 A highlight for many, including me, comes almost at the end of the hour-long tour when we happen upon the only hobbit hole that opens. Like the rest, it’s a façade but one with enough space to squeeze inside and poke your head out for a classic photo. And we all do!

The little country amble ends with a glass of ale at The Green Dragon Inn, a mock medieval tavern with a thatched roof, sturdy beams and oval windows. To get there we pass by the party tree where Baggins celebrated his 111th birthday and walk over the double-arched stone bridge near the old mill. 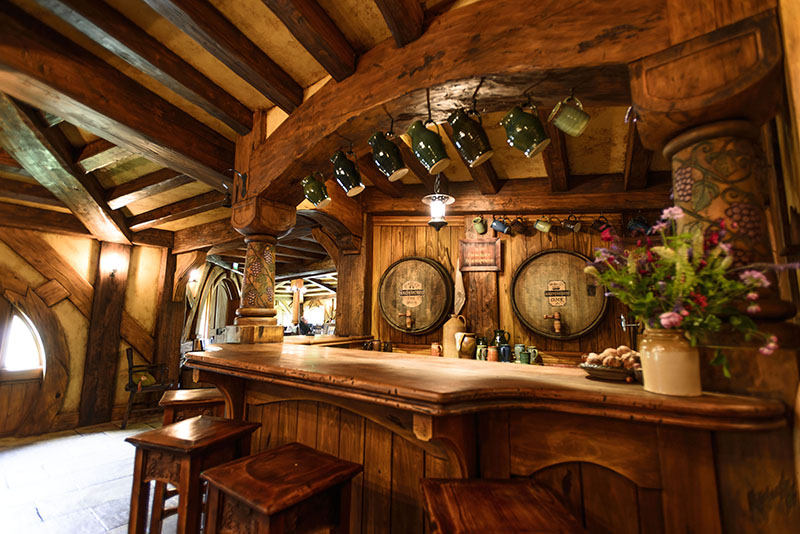 As I look back across the lake to the undulating landscape dotted with hobbit holes, it’s really not that hard to imagine I’m in The Shire. 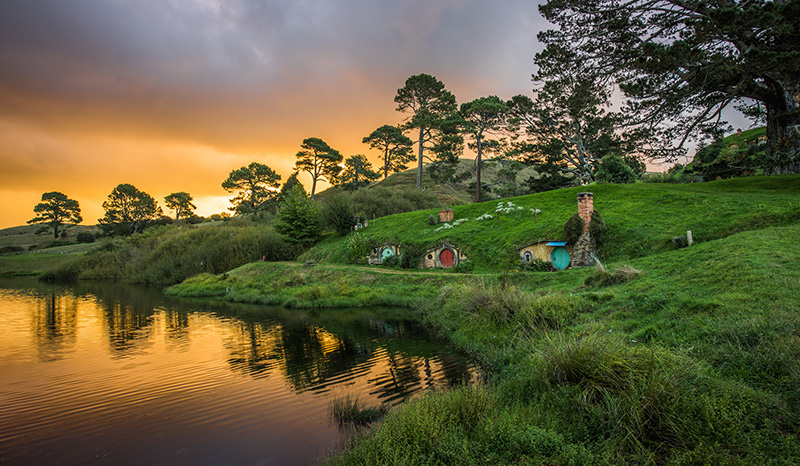 Air New Zealand flies directly to Auckland from Sydney, Brisbane and Melbourne several times a day. airnewzealand.com.au
Hobbiton (nearest main town is Matamata) is 160 kilometres south of Auckland or a two-hour drive. It is 51 kilometres from Tauranga and 81 kilometres from Rotorua. hobbitontours.com

Where to stay
Matamata and Cambridge are the nearest towns and are just 20 and 30 minutes away by car respectively.
Matamata: Arthouse Bed & Breakfast
Cambridge: Villa Shakespeare

When to go
Hobbiton is open year-round, although entrance times differ with the seasons; the film set stays open longer through spring, summer and autumn, with extra tours scheduled in the high season from late December to late February.
An hour’s walking is involved so it’s advised to take an early or late tour in the height of summer. Four-hour evening banquet tours are held twice a week all year round and more regularly in summer.