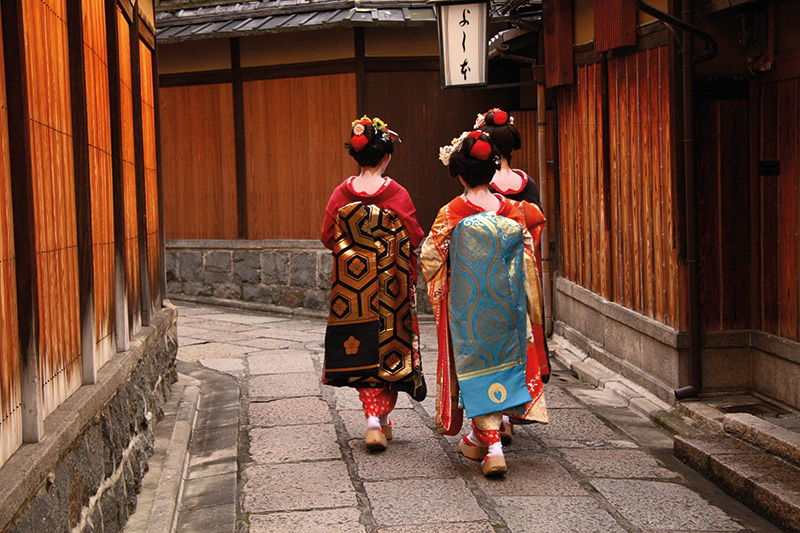 I first see her lightly shuffling along a winding alleyway off Pontocho, in Kyoto’s historic Hanamachi neighbourhood. Her quiet, feminine elegance is unmistakable; she is a maiko; a trainee geiko, or geisha to the Western world; known for her colourful silk kimono and long obi sash, ornamental pins and brilliant scarlet collar. For a few seconds, she returns my gaze; her white-porcelain face poised with only a hint of a cherry-red smile before she veers towards an unassuming doorway. Like a shimmering mirage, she is there – then suddenly she vanishes; melting into the midnight realm of red paper lanterns, tatami-matted rooms with sliding shoji doors and a dreamy accompaniment of three-string shamisen and shakuhachi flutes.

Few cities pack in as much history, culture and natural beauty of Kyoto; an ancient city of omnipresent water, tranquil shrines and temples. And of course, the geisha,  an exotic child from the “flower and willow world.”

Kyoto’s geikos not only symbolise the golden thread that ties old Japan with the new; their beguiling culture is tightly woven into many Zen-dreams. Almost a vision from a Japanese fable, they have long been revered for their poise and accomplishments in the arts and for keeping powerful secrets. Yet over a delectable Kaiseki serving at Jikishinbo Saiki, my host, Hiyori Akatsuka tells me that their graceful silhouettes are ostensibly rare birds of flight in this once-feudal stronghold of Japan.

“In the past there were several thousand geikos in Kyoto but their numbers fell to only 200 at the end of the last century,” she explains as we sample wafer-size sashimi. “When the stock market crash happened, things went very bad. Japanese business people could not afford to be entertained [by them]. There was grave talk that they could soon disappear.” But as fortune would have it, the movie Memoirs of a Geisha ignited public interest, and an arts foundation was created to attract a new generation of geikos. Today, the number of maikos in training has doubled.

“Our heritage is very important to us,” she continues, “which is why we take their culture very seriously.” And it appears that every corner I turn in the Gion, the denizens of old Kyoto find imaginative ways to advance their discreet presence on the city’s tourism grail. 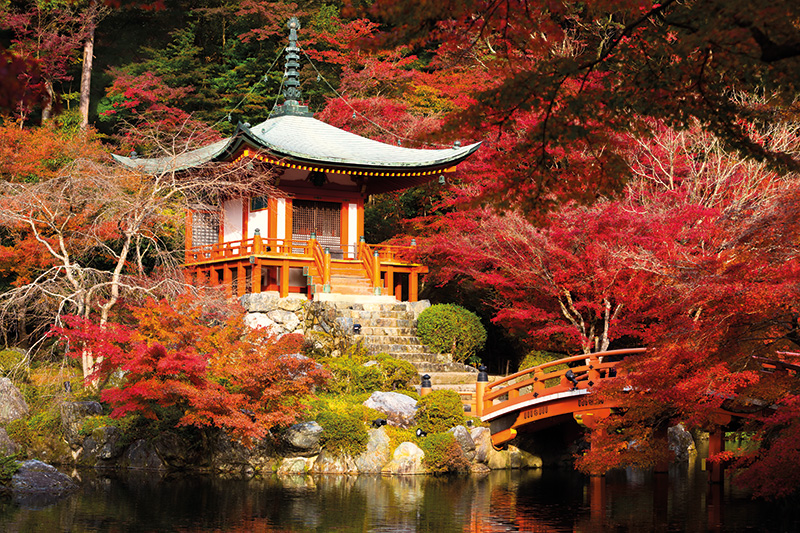 From the onset, the city is historically anchored. Yet you can experience its contemporary cadence, but always with the cultured eye of the past. Trendy sushi bars and Michelin-star ryoteis now nestle in old wooden teahouses that once played host to traditional tea ceremonies. Performances of kabuki take place near palpable Karaoke and pachinko parlours. High-speed Shinkansen trains race beneath sacred Shinto shrines where solemn chants and incense stirs the Shogun spirits that slumber among the rows of scarlet-hued toriis.

The next afternoon I weave my way across the business district. Though it’s infused with markets, restaurants and vast shopping complexes, it seems to be lacking something – the neon energy I’ve come to associate with all Japanese cities. Yet judging from downtown’s sights and sounds, it’s clear that Kyoto has roared ahead into the new millennium. At nearly every city block, streets are humming with red-tail traffic and pedestrian bustle. Black-attired executives are seen talking – no, shouting into their iPhones as they duck around construction sites. Shoppers are flowing in and out of Shinkyogoku Arcade and iconic Takashimaya like waves.  Even its futuristic downtown metro is fast and sleek like everything else made in Japan.

As with many textured cities, the ancient capital is a rich tapestry of culture, with an imperial bloodline that dates back to 794AD. Hemmed in by mountains on three sides and the fast-flowing, Kamo River, which intersects Kyoto’s eastern hills on its long journey to the Sea of Japan, the city literally sits  on shaky ground; the Urazoko fault line which keeps Kyoto  in perpetual motion. But its fierce geology, like its feudal samurai, comes with the territory I am told. Yet in Maruyama Park, an urban oasis flanked by hundreds of lissom cherry blossom, I am reminded that Kyoto’s quiet hand of nature  also has gentle roots.

Fanning across Shirakawa Canal is Tatsumi Bridge, one  of several wooden overpasses that propel the bustle of downtown into a bygone world of old Japan with weeping willows and cherry blossom trees, each tumbling with graceful abandon over cobblestone lanes. At first, I think there’s something ineffable about this vision; perhaps such encounters belong to a mythical setting. But it’s real,  and its cultural energy radiates. 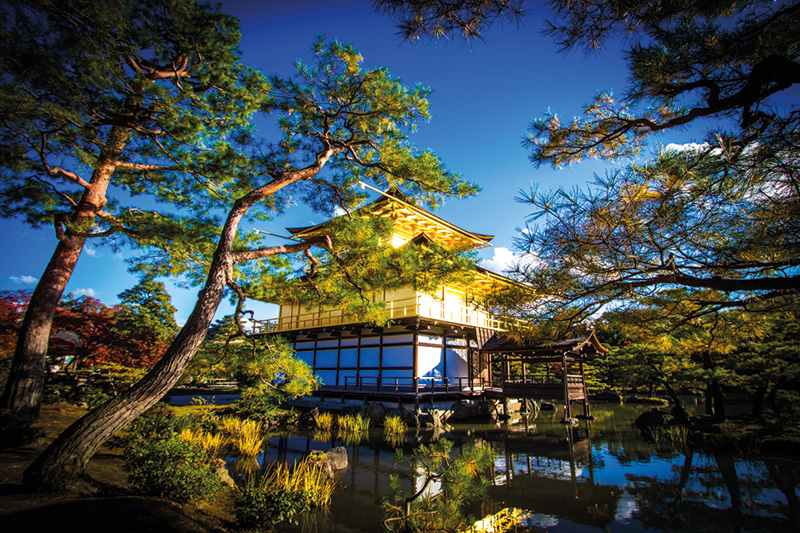 As the afternoon casts an intricate array of cerise-tinged clouds across its western sky, I find myself strolling behind a flag-wielding tour guide along the Philosopher’s Walk to Nanzen-ji Temple, a complex of Zen temples where monks bow and pray at the foothills of Kyoto’s Higashiyama mountains. With a history that dates back to the 13th century and lovely beyond words, I single out Tenjuan Temple, not only to lose my group but also a sense of time. Built for one of the Emperor’s Zen masters, I am in my own celestial plane as I sit on its hojo amid bright lanterns, swirls of pebble-shape currents and an echo of ancient chants – that is until I am ushered away by a grounds keeper at closing time. Even in paradise, there is gravel to rake.

Though Kyoto’s religious structures are in bulk supply, make no mistake: 16 out of 17 UNESCO World Heritage sites alone are Buddhist temples or Shinto shrines and their discovery is more about a cultural pilgrimage than spiritual intention. But at Kiyomuzu-dera Temple, with its sweeping panoramas of Kyoto, the country’s most revered Shinto site can only be described as unadulterated excitement.

Arguably the most spectacular temple I come across is the fabled, Kinkaku-ji, known as the Golden Pavilion. Built as a villa for the powerful shogun, Yoshimitsu in the late 14th century, Kinkaku-ji was later converted into a temple at the time of the warlord’s death. Destroyed several times in its lifespan, most recently by a disgruntled monk who reduced the temple to ash, the pavilion was meticulously rebuilt and embellished with new gold leaves and a gilded phoenix. 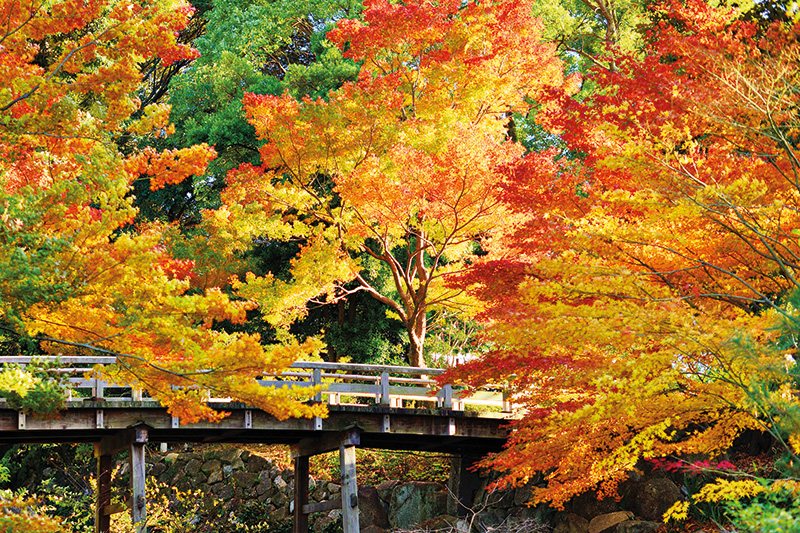 So it is with the same fascination that I set off to view Ginkaku-ji, the Silver Pavilion, originally built as a summer retreat by his grandson, Yoshimasa, one of the great Shogun masters during Japan’s Higashiyama cultural period. As I drift through a familiar pattern of exploration, I am initially taken back by the traditional wooden structure – austere and devoid of any silver dressing. But it is beautiful as with the stirring winds that stroke the golden woodlands. Yoshimasa’s vision remains very much alive.

After several fortifying rounds of shrine viewing, I find myself travelling by train and bus to Miho Museum, a unique glass and steel structure that burrows deep into the heart of the Shigaraki Mountains. Art and nature proliferate here and undoubtedly, pennies from heaven to maintain it. Designed by I.M Pei, the creator of the Louvre’s Glass Pyramid, it would be easy to overdose on the founder’s magnificent ancient art collection, but in truth, it is the dramatic views – deep evergreen forests and the wisps of mountain mist that hold my attention for a seemingly long time. I soon fall into conversation with an American horticulturist, Rob Henderson, an Oriental art aficionado who likens the museum’s setting to Nirvana.

“It is the only place in Kyoto where the surrounding topography fully distracts me from the incredible architecture,” the visiting California native says as he leans closer to a massive window overlooking a canopy of fiery Japanese maple and white birch. “I love that deliberate synergy Kyoto has with nature – especially its trees. They  are a passage of time.”

Hordes of picture-snapping tourists would agree that Kyoto’s cherry blossom season – delicately pink and gossamer when in bloom, and the colourful Gion Matsuri, the oldest festival in Japan hold the year’s best season tickets. But for others, it’s the mere sight of a geisha that inflames their imaginations.

“Cherry blossom time and geishas reflect the soul of Japan,” Rob tells me later that evening at Ganko Sushi. “And there is no other place that can spellbind you like Kyoto.” 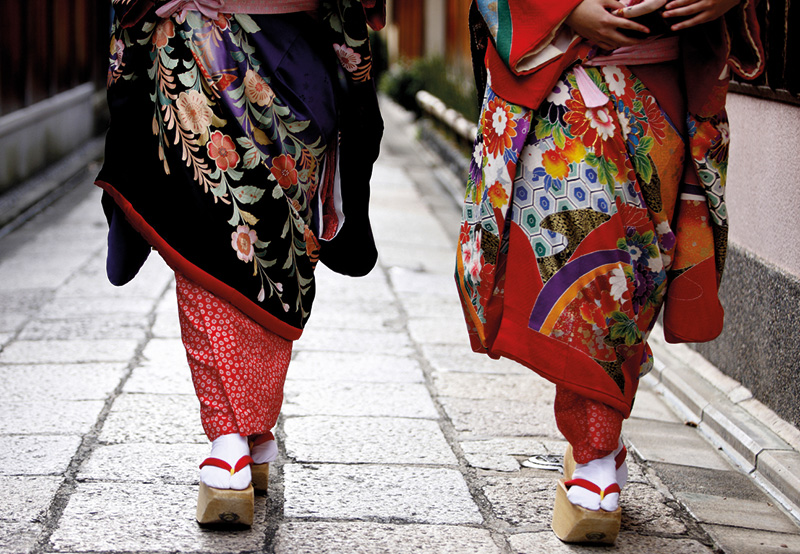 I retreat to my ryokan, a traditional Japanese guest house near the massive stone walls of Nijo-jo Castle, where I’m greeted with a gentle bow. “Misu o kangei shimasu,” my Kimono-clad hostess says. “Please,” she gestures towards my room, “enjoy your rest.” I fall into a billowing futon after a night of sake and shakuhachi. It starts to rain, and a gust of wind knocks against the ryokan’s ageing wooden frame.

The ghosts of Niko-jo’s ruling shoguns and the Gion’s geishas begin to encircle me. •

Getting there
• Japan Airlines flies direct from Sydney to Tokyo. au.jal.com/aul/en
• Jetstar flies to Osaka with a train linking from there to Kyoto – a one-hour journey. jetstar.com.au
• Tokyo to Kyoto by Bullet Train (Shinkansen). railplus.com.au

Where to stay
For a traditional Japanese living experience. japaneseguesthouses.com