The world’s largest water village, Kampong Ayer is a remarkable example of community, home to tens of thousands of people living, working and playing in the shadow of Brunei’s gilded mosques.

A door swings open and a young boy leaps through it. His feet find no purchase on steps or solid ground; he falls through the air and cannonballs into the olive-hued water below, where his friends try to keep a leaky skiff from capsizing. The boy attempts to climb aboard the boat when one of his friends smacks him between the eyes with a fish. The boys can’t help but laugh and I crack a smile from my perch on the gangway that separates one group of stilt homes from the next. The spell is broken only when the young boy’s father pokes his head out the door. Dad is dressed in a freshly pressed navy suit accented with a crisp crimson tie – a man more at home on Savile Row, than rowing a boat. Dad waves goodbye to the boys and disappears back through the house, on his way to work.

From the outside, Brunei’s massive assembly of stilt homes, known locally as Kampong Ayer, is reminiscent of a tin-can hamlet. Standing on a steel bridge that links the village of Sungai Kedayan to the village of Ujung Bukit in Bandar Seri Begawan, Brunei’s capital city, the scope of Kampong Ayer is revealed in a sweeping panorama. Stilt houses surround the Sultan Omar Ali Saifuddin Mosque, a great Mughal landmark built on reclaimed land in 1958 and an homage to the sultanate’s emergent wealth and power. Beyond the mosque central Bandar grows skyward – malls, office towers and manufacturing facilities cast shadows over the water villages, while influence and power radiate from the Istana Nurul Iman Palace south of the city on the bank of the River Brunei.

Brunei has become an Asian commercial juggernaut on the strength of oil and gas profits while citizens enjoy a standard of life unparalleled in the region; the government has made attempts to move residents of Kampong Ayer inland only to be rejected at every attempt, as the public remains dedicated to a life lived over the water in a place where community reigns supreme.

Disconnect defines Brunei. Istana Nurul Iman is the largest palace on earth, home to Sultan Hassanal Bolkiah, the world’s second-wealthiest monarch after the King of Thailand. The Sultan’s palace contains 1,788 rooms, while Kampong Ayer is comprised of roughly 4,000 individual homes, giving shelter to around 40,000 Bruneians, more than a third of Bandar’s total population. The palace contains 257 bathrooms; villages in some of the six mukims, or floating districts, are without plumbing apparatuses, with villagers resorting to doing their business in shanties at the end of long gangways. The palace uses more than 50,000 light bulbs while it’s difficult to navigate from one village to the next at night, so conspicuous is the lack of adequate municipal luminosity. 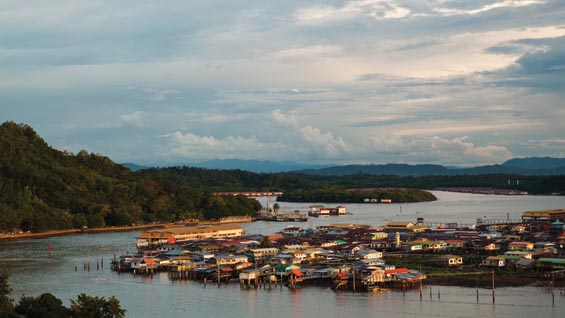 What does shine brightly, day or night, is the golden dome of the Saifuddin Mosque, which, at 52 metres tall, can be seen from anywhere in the city. International critics deride the excesses of the Sultan and his family, citing the country’s great mosques, the Sultan’s palace and other national landmarks as costly vanity projects. The royals themselves are known for infamous exhibitions of affluence; Sultan Bolkiah once had a private helicopter deliver his polo shoes to him before a match with Prince Charles, while the Sultan’s younger brother, the disgraced Prince Jefri, misappropriated more than US$14 billion in federal reserves that he in turn used to bolster his private fleet of planes, luxury vehicles and hotels. Sultan Bolkiah has a museum dedicated to his honour; The Royal Regalia is a collection of curios culled from the Sultan’s closet that includes the Kasur Namat, the official royal cushion, his Majesty’s Royal Chariot and gifts from visiting heads of state that include a copper eagle perched on a clenched fist given by the President of Ukraine, and a Formula 1 racecar bequeathed to the Sultan on his birthday by an Italian dignitary – after it was used to win a race, of course.

Regrettably, there is only so much to be learned about a nation when visiting a museum dedicated to one of its citizens. Unlike other famous men with their own museums, like Thomas Edison or Andy Warhol, Sultan Bolkiah did not invent the light bulb, nor has he exhibited Pop Art images of Campbell’s Soup cans, though he has had a special-edition Leica camera named after him.

Opportunities to wax lyrical over the culture of politics are limited in Bandar – Brunei is a dry nation – so I settle for a reasonable alternative in the form of nasi lemak, a traditional Malay dish, and a side of crisp sambar deer, at the pasar malam (street market) on the east side of the Sungai Kianggeh, a small stream that runs parallel to the River Brunei. On a day that broke squally and grey few foreign folk have ventured down to the market for lunch; most of the expatriates that a choice they’ve made in an effort to ensure the survival of a 1,500-year-old cultural legacy. The government has provided these communities with schools, hospitals, electricity and clean, running water – and most of the other modern conveniences we love taking advantage of in the west.”

As we cross a footbridge over the Sungai Kianggeh, a boat trails a blue ribbon of surf through the water below us. Everything from fuel to education to medicine is subsidised in Brunei, and while there is no denying that the sultanate reigns with absolute power, the people exercise a degree of social freedom and economic autonomy that is only a pipedream for fellow residents of the island of Borneo. After spending time over the water, it becomes clear why Bruneians work so hard to preserve their way of life when it would be so easy to abandon it.

Kampong Ayer is the only place in Brunei where traditional culture has refused to be bullied onto dry land. While Prince Jefri navigates the Malé Atoll on a 46-metre yacht named Tits (Nipple One and Nipple Two are his lifeboats), a devout man at a small temple walks through a plume of smoke and stares out the backdoor over the rippling, seething water kingdom before him. I follow him out of the smoke, careful of my footing; it can be difficult to navigate the planks in some places, as not all districts have benefited from retrofitting and redevelopment projects. With prayer bells sounding all around me – ringing in the belfries at the Saifuddin and Duli Pengiran Muda Mahkota Pengiran Muda Haji Al-Muhtadee Billah mosques – villagers make their usual rounds, visiting neighbours homes, delivering gifts and spreading a week’s worth of gossip.

I’m caught up in the commotion, whisked from one home to the next by a zealous man named Hamizan; Hamizan introduces me as his friend to everyone we meet. Hamizan throws an arm over my shoulder and guides me into a classroom at his village’s schoolhouse, waving to his son who sits proudly at the head of the class. Hamizan tosses me into the fray and I’m swarmed by the kids as if I’ve just run into a bear cave wearing a helmet made of honey. At our next destination, I’m given a fragrant bouquet of flowers by a woman draped in a colourful sarong. She asks me if I would mind helping her bring in her groceries from the water taxi below, and extends an open invitation to dinner. Next door I meet a fisherman who invites me to cast his net off the porch and out over the water. He doesn’t wear a straw hat, but that doesn’t much matter; this is still as complete a revelation as I’ve ever known on the road. 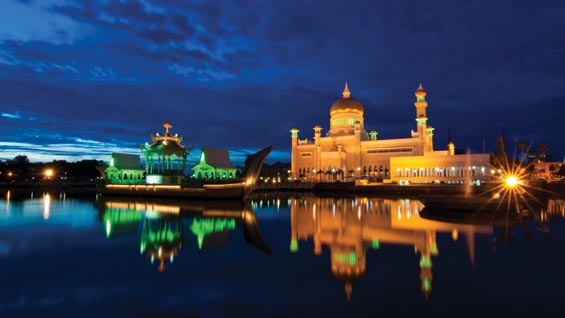 It can be difficult not to romanticise travel in Asia; I have yet to meet someone on the road who hasn’t dreamt of watching elephants thunder through the mist, of stowing away on a slow boat on a lengthy river journey, of diving into cerulean seas or of climbing to the very precipice of the earth. Once we take to the road, visions of travel permeate our subconscious minds, though the reality of the everyday is often lacking in the elements that make our dreams great in the first place. I imagined Borneo as a kingdom of howling primates, cannibalistic sacrifices and untrammelled jungle daring intruders to enter. What I found in Brunei was something else entirely. Kampong Ayer crafted a new, everlasting vision of Asia that will remain forever etched in my mind, a vision of a kingdom erected on teak poles but held aloft by purpose, devotion and community.

Royal Brunei Airlines flies direct to Bandar Seri Begawan, Brunei’s capital, six times a week from Brisbane, daily from Melbourne and three times a week from Perth.  bruneiair.com/australia when to go
As Brunei is situated just a few degrees north of the equator, the weather is hot and humid year-round. Visit between June and September to avoid the country’s two monsoon seasons: October to February and May to June

where to stay
In Bandar Seri Begawan, check in to one of the region’s most prestigious, not to mention luxurious resorts, The Empire Hotel & Country Club. 673/241-8888; theempirehotel.com

further information
For additional advice on what to do in town, contact Brunei Tourism. tourismbrunei.com