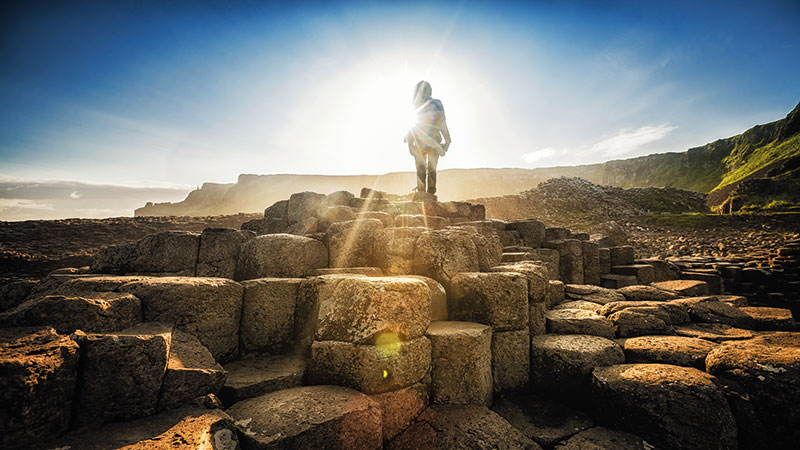 “I’m guessing that Donald would have been your forebear,” Charlie McGonigal told me over a Guinness in Donegal Town. “No, no,” I replied “My family left Ireland around 1870 I believe.”

“That’d be right it was about that time that Donald left town,” Charlie told me with great certainty.

Welcome to Ireland, where 150 years of family history are recounted like last summer’s holiday. For many Australians the links to Ireland are strong. Travel there and you’ll be welcomed home. Indeed, an elderly Irish man told me that Jackie Kennedy retreated to Ireland after JFK was assassinated. When she was ready, she’d venture to the small local pub on Sunday evenings. She discovered that the locals thought it was time for her to come out of mourning when the Master of Ceremonies declared “I’d like to call on the Widow Kennedy for a song” and she complied.

The diaspora, the scattering of the Irish population across the world during the 19th Century potato famine, ensures there’s a never-ending stream of Australians, Americans and Canadians, amongst others, heading to Ireland each summer. Most are bound for Dublin and the Ring of Kerry, a circuit of popular sights in the south. If you’d like to meet Irish folk, rather than fellow tourists, it’s a better idea to head north where there’s a string of sights, a lot of history and the best local whiskey. Donegal, at the very top of Ireland, was one of the hardest hit by the famine, as its museums reflect. 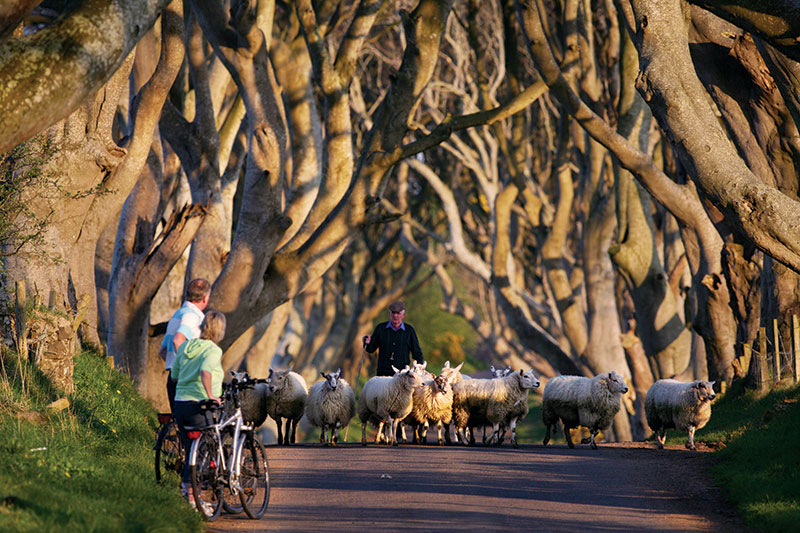 Ireland rewards slow travel. It’s no secret that the people of Ireland are the real gems of the country and spontaneous conversations are much more likely to be long remembered than any number of castles and cathedrals. Rushing from site to site doesn’t really allow time to engage. So my advice is to find a city or, better yet, a town or village and stay for a few days. Tour around during the day but pick a pub and stick with it. By the second or third night you’ll be welcomed as a regular and the strength of Irish community and Irish traditional life will soon become apparent.

The whole of Ireland is a beautiful mosaic in shades of green. From the Giant’s Causeway to the wilds of County Donegal and the cities of Londonderry/Derry and Belfast with their tortured histories and incomprehensible accents, the north is an area that has a lot to offer.

Of course, the top of the island of Ireland is divided into two countries: the Republic and the UK’s Northern Ireland. Only a few decades ago the border was heavily fortified. Today the border is so vague that you’ll probably only notice you’ve crossed it when you notice the phone booths and post boxes have changed from green to red – and you need pounds not euros in the shops. 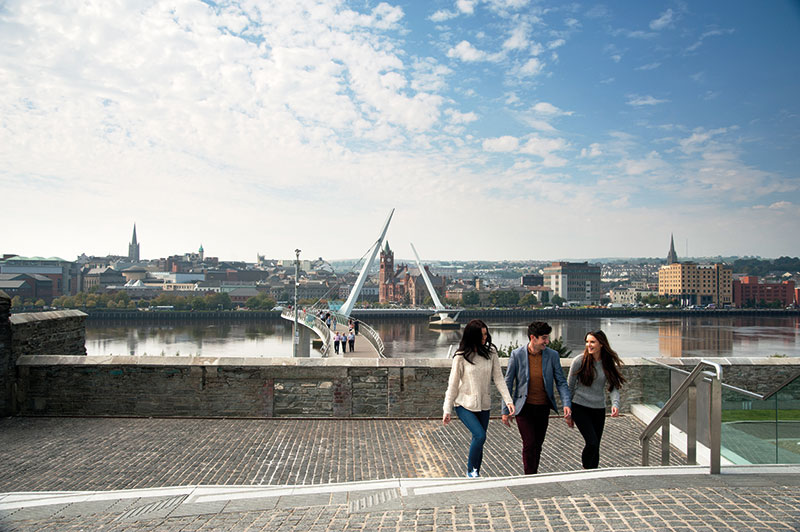 A good way to get a perspective of “the Troubles” is to take a one-hour walk with Derry City Tours. It certainly doesn’t gloss over the awful events that characterised decades – indeed centuries – of inter-religious warfare. Along the way you look down over Bogside from the top of the wide city walls and see the political murals below. Indeed, you can trace the whole history of the Troubles through the city’s murals. Or by the city’s name: for the UK it’s Londonderry and for the Irish it’s simply Derry.

In 2011, a new bridge was completed across the city’s River Foyle and named the Peace Bridge, symbolic of the new mood in the city as it links Nationalist Cityside with the Unionist Dockside. Overall, Derry is one of Europe’s most impressive walled cities – and the only one in Ireland that is fully intact. You can walk most of the 1.5 kilometre circumference of the city along the top of the 400-year-old wall that’s 10 metres wide in parts. No wonder it’s never been breached. There are just seven gates but still 24 canons in place.

But it’s more the craic – the spirit of the city that impresses. In 2013 it was the first UK City of Culture. Walk around town of an evening until you hear music and when you venture inside you’ll find a joyous culture. Peadar O’Donnell’s at 59 Waterloo Street has the reputation as the best music pub in town. 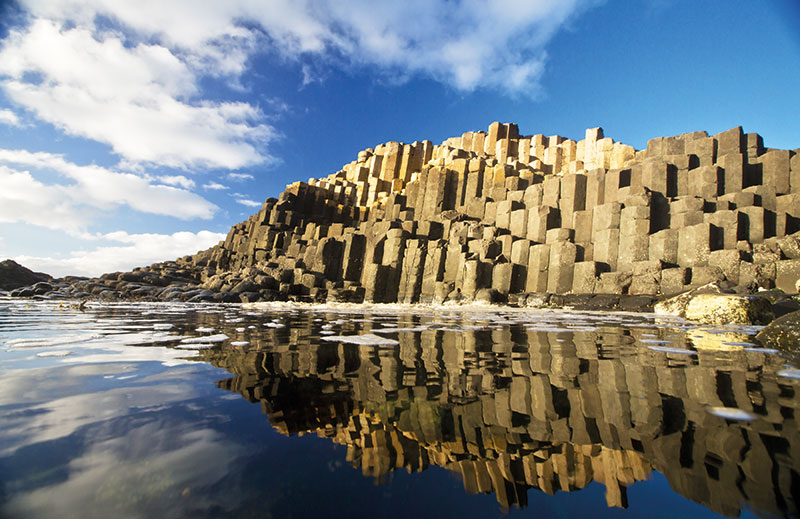 Down the road in Belfast, the big, not-so-new-anymore Titanic Belfast that opened in 2012 is a totemic display of the legendary ship that was built in these shipyards. The nine interactive galleries are impressive and you’ll see and learn a lot. With commendable sensitivity, there are no artefacts from the Titanic wreck site but there’s a lot from the construction and the White Star Line. If you have an interest in the Titanic, this alone is reason enough to book a ticket to Ireland.

If you follow the coast between the two main cities of Northern Ireland, you’ll explore the villages of the Glenns of Antrim as well as discover several locations used in Game of Thrones. Cushendun Cave was where the “shadow baby” was born and the Dark Hedges, a striking row of interlocking beech trees, was GoT’s Kingsroad.

While there’s grand scenery everywhere, in this part of Ireland there’s one dominant natural attraction: The Giant’s Causeway. This World Heritage-listed site is more than 40,000 perfectly-formed hexagonal basalt columns spilling down into the sea in County Antrim. Legend has it that it was built by the giant Finn MacCool as a shortcut to Scotland but spoilsport geologists say it’s the remarkably-uniform remnants of contracted molten lava from 80 million years ago creating 40,000 hexagonal columns. 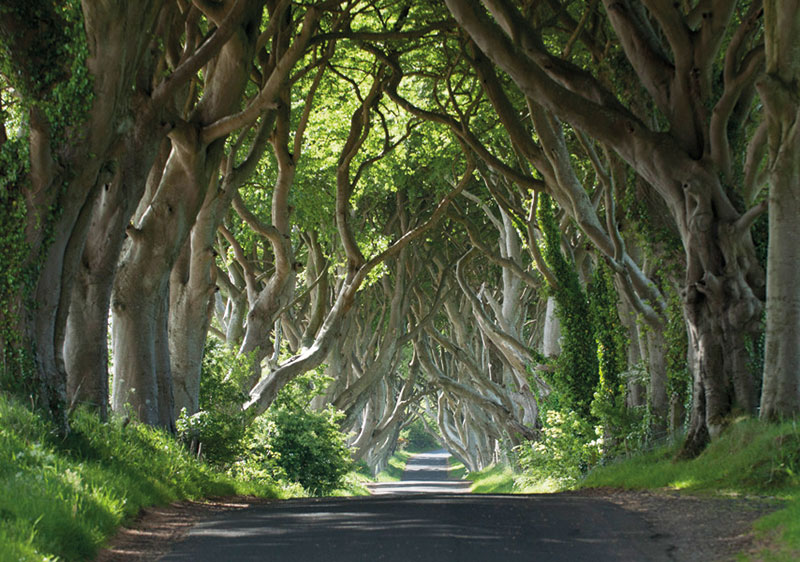 To get to the Giant’s Causeway, you turn off the A2 at the town of Bushmills. Now that may be a name familiar to drinkers of Irish whiskey. Bushmill’s Distillery was first granted a licence in 1608 and still exclusively uses the water from the nearby Saint Columb’s Rill, a stream that’s a tributary of the River Bush. There are daily tours, unless maintenance is under way, and drinkers will be heartened to know that there’s a gift shop.

The scenic route from Derry to Donegal is known as the Wild Atlantic Way, and it’s well named. For a touch of luxury, consider a stay at Rathmullan House a Georgian house built on Lough Swilly, north of Letterkenny in County Donegal. It feels very Lords of the Manor, yet there’s a wild beauty along the shore outside.

The tiny town of Crolly was where Enya grew up. Leo’s Tavern may have given her her love of music and her platinum disks are displayed on the walls. 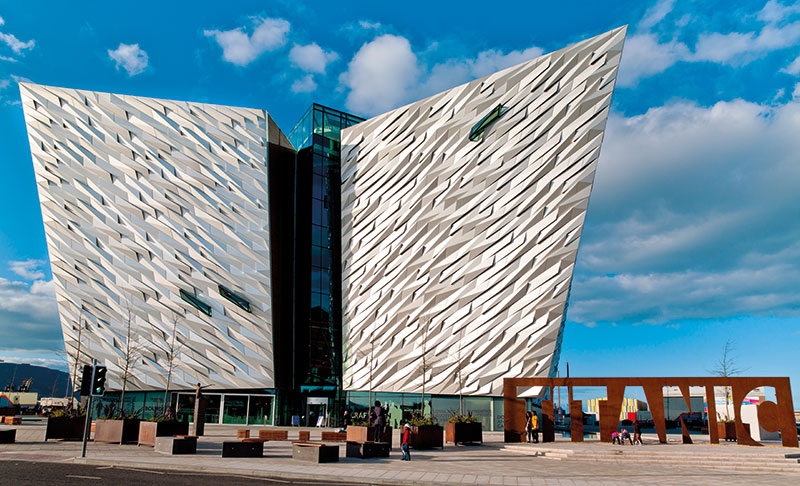 Killybegs, to the west of Donegal Town, is Ireland’s principle fishing port and fishing is an industry that has also featured much in Irish plays. The Maritime and Heritage Centre explains the close relationship. The Slieve League sea cliffs further west are the highest in Europe, soaring 600 metres above the North Atlantic. It’s a great place to take a walk for some wonderful views and, quite often, a lot of weather.

One of the quaintest towns in the north of the Republic is Donegal Town on the River Eske in County Donegal. The major industry of the town is tweed, and that’s on display – and sale – everywhere. Donegal suffered so much in the 1850s that a Donegal Relief Fund was set up in NSW and many residents emigrated to Australia. Whether seeking your ancestors or just sightseeing, a short walk from the castle to the abbey reveals much of the prettiness of the town.

The town is on Donegal Bay and if you take a boat tour on the bay you’ll be following in the footsteps of Vikings. Donegal takes its name from the Irish Dun nan Gall meaning the “Fort of Foreigners” from the time when Vikings established a stronghold here.

There have been a lot of comings and goings to and from Ireland over the millennia. Perhaps that’s why the Irish are so open to visitors. Here in the less-manicured wild north that’s obvious with everyone well prepared to stop for a chat. You’ll get a warm welcome in a wonderful country. • 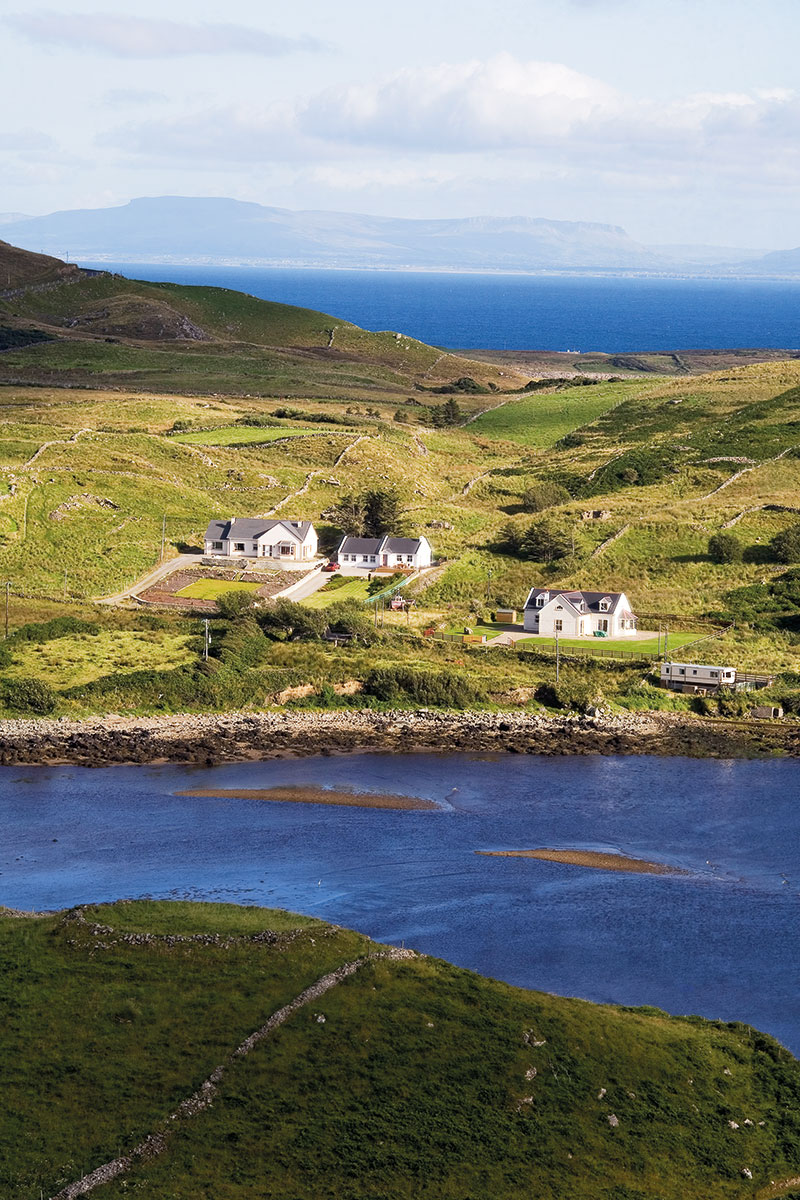 There are flights to Dublin or Derry from London or several other cities in the UK. It’s also easy to travel across by ferry, with or without a car.

Getting around
It’s useful to have a rental car to be able to leave the big cities. One needs caution on the narrow, winding roads once you are off the main highways.
• Renault Eurodrive: renaulteurodrive.com.au

When to go
The summer months are definitely the best time to visit the north of Ireland. There may be some rain but there’s also a good chance for glorious long summer days, too.

Where to stay
Rathmullan House: rathmullanhouse.com