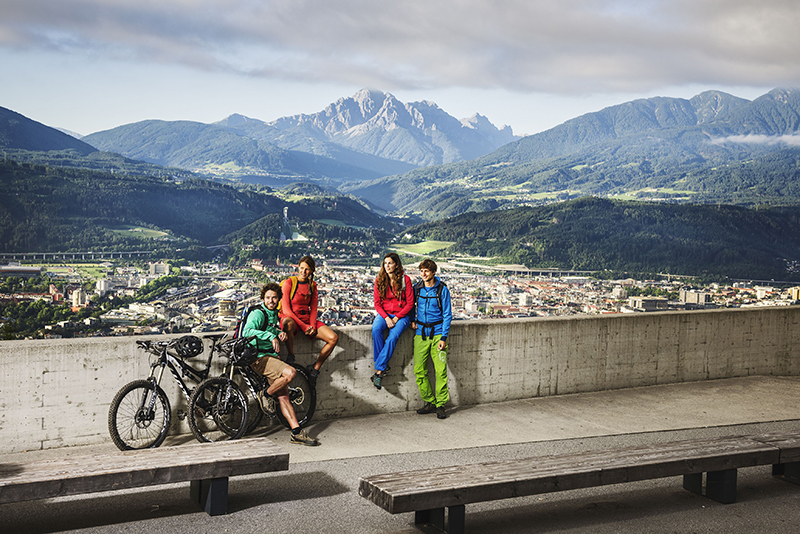 Innsbruck to me has always been a city in black-and-white, seen in the winter when snow decks the rooftops, old-town alleys are deep in shadows and fabulous skiing draws me into the surrounding mountains. Arriving in summer is like being born again, into a new world of sunshine and colour: orange parasols on café terraces, pink geraniums on window ledges, fat tomatoes and peaches tumbling on the Markthalle’s food stalls. The Inn River is milky blue and, above town, meadows explode with yellow flowers. My smile is as big as a rainbow.

Innsbruck has always been one of my favourite small cities: easy to get around, popping with history and culture, lively and edgy thanks to a large university-student population, and with enough startling modern architecture to fit firmly into the 21st century. But summer brings a different vibe. Bakeries spill cake-gobbling customers into the sunny streets, clothing layers are thrown off to reveal hairy hiking knees, and much longer days mean I have time to enjoy the outdoors, even long into the evening. 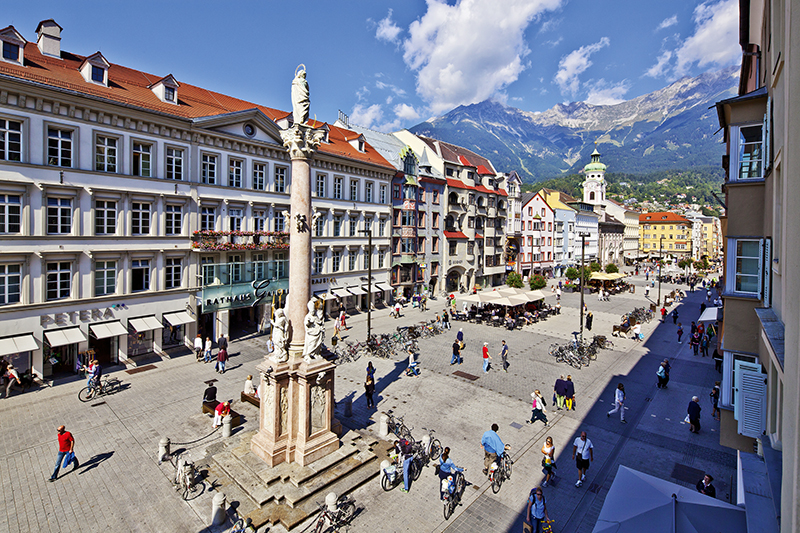 That means giving Innsbruck more of the attention it deserves. The city became Austria’s capital in 1420 and, before the turn of the century, had reached the height of its political and cultural importance. It’s a pleasure reacquainting myself with its historic highlights. The vast cream-and-yellow Hofburg palace in the middle of town is an entertainment of squeaking parquet floors, wobbly-chinned Hapsburgs in portraits and a frescoed splendour of bare-breasted nymphs and dimpled cherubs. Nearby is Maximilian Chapel, where full-size statues of the Hapsburgs line the nave like a chorus-line turned to bronze. 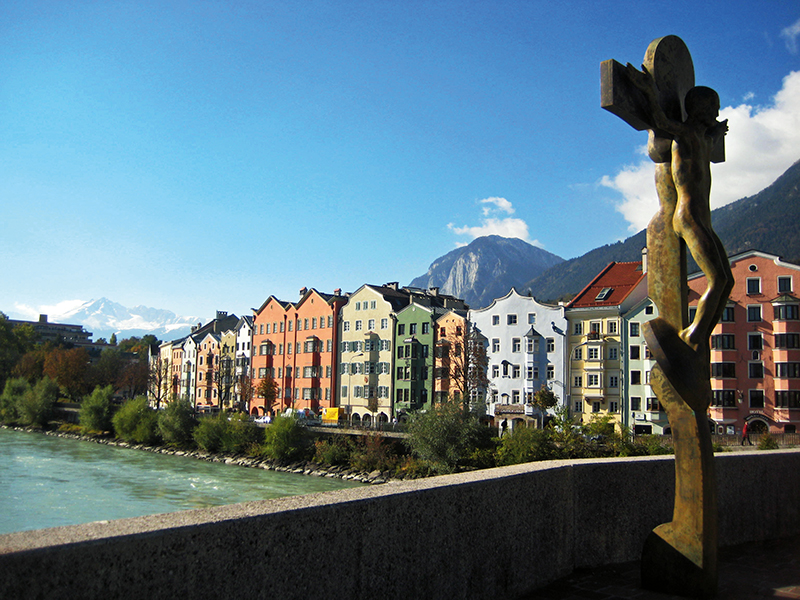 Innsbruck’s eclipse by Vienna did the town no good but preserved its historic medieval and Renaissance core, safe from the expensive renovation rescues of busybody baroque architects. Maybe in winter I had my shoulders hunched against the cold or my eyes obscured by woolly hats, but warm weather allows me to appreciate the old town at a slower pace. Streets are lined with yellow and orange buildings, punctuated by church spires and monuments to battles and plagues. In the central square the Golden Roof winks in the sun as if transmitting semaphore. The gold-plated tiles on this Gothic building once sheltered a royal box from which emperors watched tournaments. Now it looks down on happy tourists in cafés, forking up nut strudels topped with an extravagance of cream. 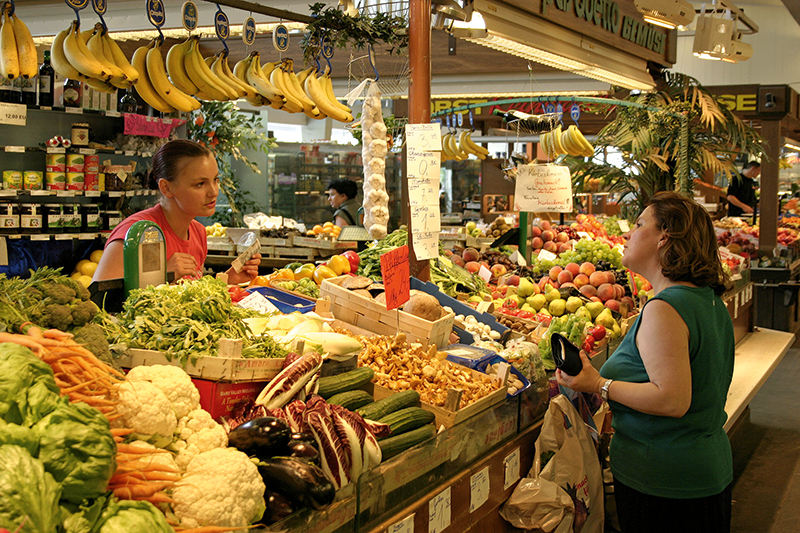 Innsbruck isn’t just about old things, however. Chic department stores line Maria-Theresien-Strasse, which eventually becomes Leopoldstrasse and leads me to the newly hip district of Wilten, with its boutique eateries and fashion shops. I also track down new, high-tech museum Audioversum, which delves into the science of hearing and sound. I join kids making music by jumping up and down touch-sensitive stairs, before having a good scream inside a soundproof box that records decibels, and later discovering that it’s possible to hear through your elbows. 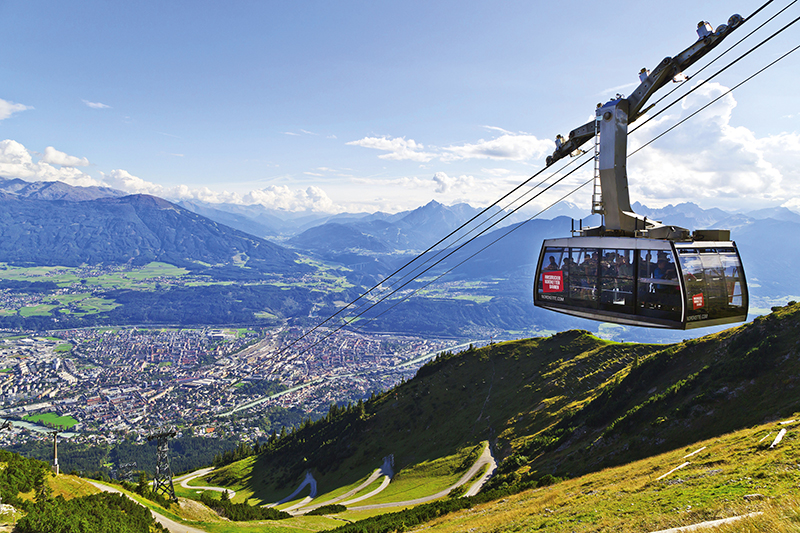 Two top attractions sit just outside town. Lumpen white Ambras Castle sits on a crag at suburbs’ edge and hides fabulous art, antiquities and curiosities collected by Archduke Ferdinand II, while Swarovski Crystal Worlds has stunning and occasionally weird installations made from the glittering crystals of the world-famous local company. I enjoy this unexpected, enchanting kingdom immensely as I wander from a crystal-encrusted tree to an Ice Passage and a giant floating jellyfish of winking crystals.

Outside, sun glittering on a Crystal Cloud installation reminds me that, in summertime in Innsbruck, I shouldn’t devote all my time to museums and urban landscapes. One thing I know from winter visits is that the best characteristic of this city is how easy it is to get into the mountains. I do the same now, hopping onto a train and cable car from the very centre of the city. Just 20 minutes later, I’m on the 2,256-metre summit of the Nordketten, lightheaded with an extravagance of alpine views. 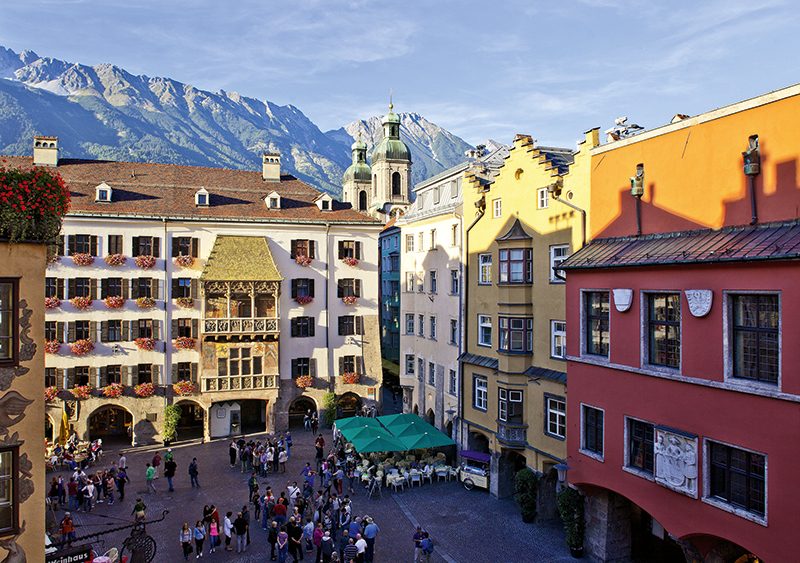 Across the valley on the other side of town sprawls a sunny alpine plateau dotted with stands of pine trees and flower-scattered meadows. Getting there is just as easy: I sit on a rattling red tram and am soon alighting in the village of Igls.

The landscape is as happy as a child’s drawing: mountain peaks, scarlet geraniums, sunflowers as tall as people, and houses with snug red roofs. Walking paths lead off into the countryside backed by mountains, as if I’ve just gate-crashed a Sound of Music movie set. 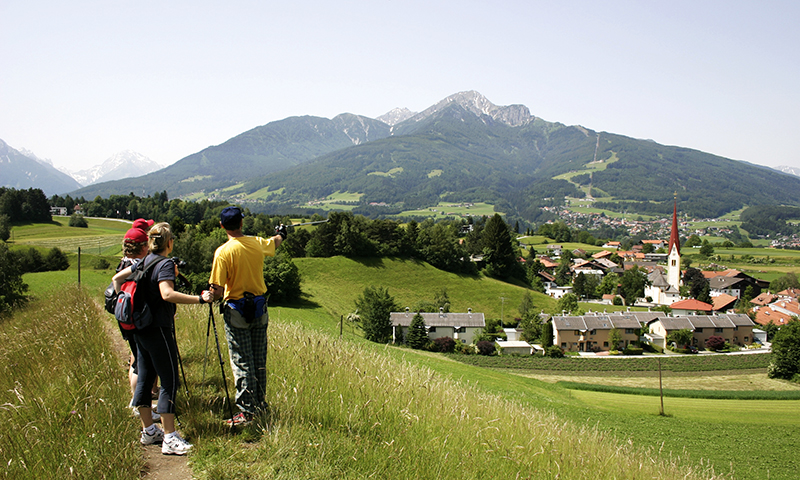 Up behind Igls, Patscherkofel assuages my sudden urge to climb every mountain. I’ve been up this in winter on ski lifts, but in summer a few hours of hearty hiking bring me wheezing to the top. I return the next day to tackle the seven-kilometre Zirbenweg path that leads around the summit in under three hours, through clumps of centuries-old pine trees and mountain ridges, where panoramic views of the Inn Valley and the Alps greet me at every corner.

Innsbruck is down below, snug and sedate. My holiday happiness is found, sitting here on a gorgeous mountainside knowing that, before the day is out, I’ll be back down in one of Europe’s prettiest cities, tucking into an outrageous schnitzel and well-earned beer. •

When to go
The best time to visit – unless you’re a skier – is May to October.

Where to stay
• Nala Individuellhotel sits on a tranquil street a walk from downtown and has quirky, all-different rooms, many with mountain views. nala-hotel.at
• Hotel Grauer Bär is a good mid-range hotel adjacent to the old town. grauer-baer.at
• Sporthotel Igls is a comfortable, unpretentious hotel with a health spa in an alpine village setting above Innsbruck. sporthotel-igls.com

Where to eat
• Restaurant Ottoburg has an old-world, wood-carved interior and dishes up hearty helpings of sausages and schnitzel. ottoburg.at
• Sitzwohl might be Innsbruck’s best restaurant, with contemporary reinterpretations of Tyrolean dishes. restaurantsitzwohl.at