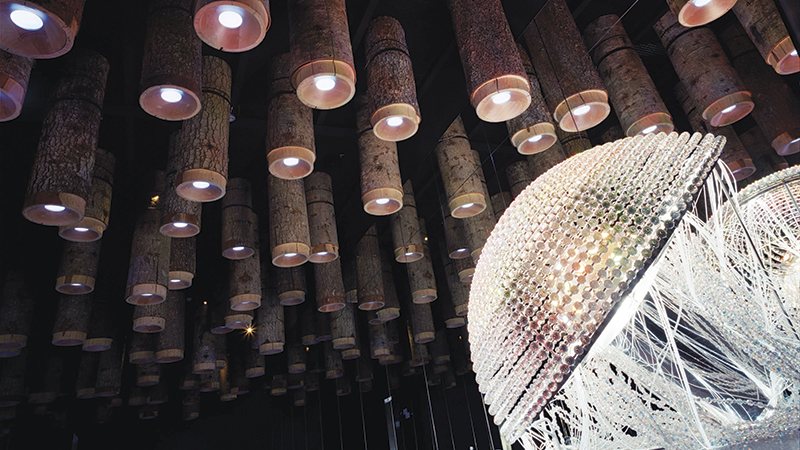 Just what is it about mountains? I ponder this when staring at a quote affixed to the windows at the Seegrube, a restaurant and gondola station perched high above what is Austria’s most beautiful alpine city.

“The mountains are calling and I must go” wrote John Muir, a Scotsman who moved to America and became a writer, mover and shaker and constant traveller. He lived in Yosemite and it was his idea to create Yosemite National Park. He loved and lived for the wilderness, and if he ever had of made it to Innsbruck, high up in the Nordkette where I stand, he undoubtedly would have fallen in love with it too.

There is something spiritual, something soul stirring when surrounded by nature’s best work, whether covered by its winter coat of powdery snow or dressed in forests of green with a bit of wildflower bling. We experience a little of both on our visit, and like a child fretting that mum and dad don’t go out of sight on a family walk, I find myself constantly looking up for a peek of the Patscherkofel or a glance at the Glungezer. The soaring ranges are entrancingly beautiful and I can’t get enough of them. Muir was definitely on to something. 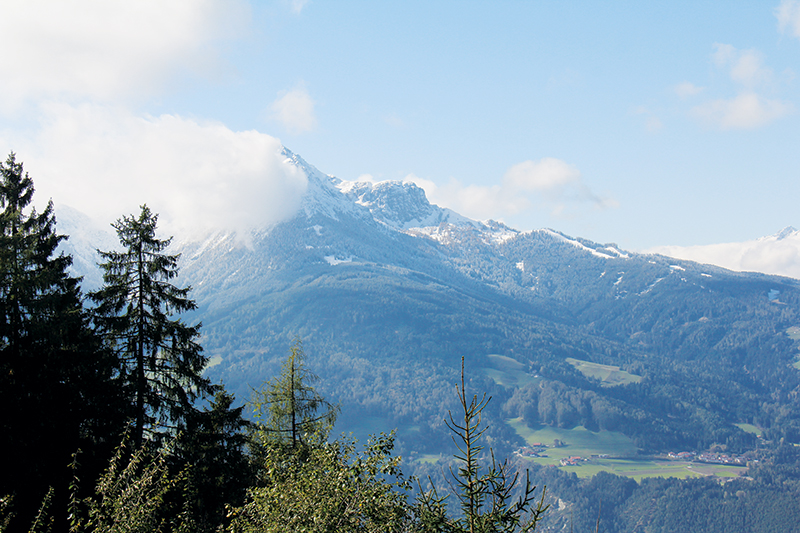 Innsbruck is not a one trick pony, with an impressive blend of alpine, urban and imperial attractions. Walk through the Old Town with its medieval buildings, cobblestones and extra thick stone walls to hold out the enemy and it is not a stretch to imagine you are walking through with a sword hanging off your hip; your horse enjoying a drink in a nearby stable. Stop outside the Golden Roof, with its two storey balcony and 2,738 tiles made of gold, and you can picture the Emperor Maximilian sitting in what was then a type of Royal box, watching jousting and the like in the square below.

These days it is the Roof that people come to see, from backpackers to seniors and every one in between. Once the Instagram and Facebook pics have been snapped, it is fascinating to stroll around the alleyways, perhaps picking up a souvenir or two at one of the many shops, an apfel or topfelstrudel at Kröll Strudel Cafe, some traditional elegant Austrian clothing at Gössl, or perhaps some sacher torte at the elegant and historic Café Sacher.

After licking up every last morsel of that wicked Sacher Torte, toddle up the stairs to the Imperial Palace (Hofburg), built in 1500 and a Hapsburg stronghold. The highlight is the Giant’s Hall, a truly magnificent hall which now displays paintings to commemorate Empress Maria Theresa, the only female ruler of the Hapsburg dynasty, and her 16 children – including Marie Antoinette. It is a little disconcerting to know that after her husband, Emperor Francis, died during the wedding celebrations of their son Leopold (11) in 1765, he was laid out in this very room. Maria Theresa then ordered that a Triumphal Arch be built, celebrating the wedding on one side and the death of her beloved on the other.

Just up from the Imperial Palace is the Hofkirche, which is where we find Emperor Maximilian’s Tomb along with 28 massive bronze statues of his ancestors. The workmanship is quite extraordinary, with the standout pieces being King Arthur (Maximilian was a fan) and his first wife Mary of Burgundy. The Hofkirche is also home to local hero Andreas Hofer, who led his native Tiroleans in battle against the superior forces of Napoleon on the Bergisel in 1809. He was successful in fending off the interlopers in the first three battles, but lost the fourth. Fresh flowers on his tomb show that he is not forgotten. 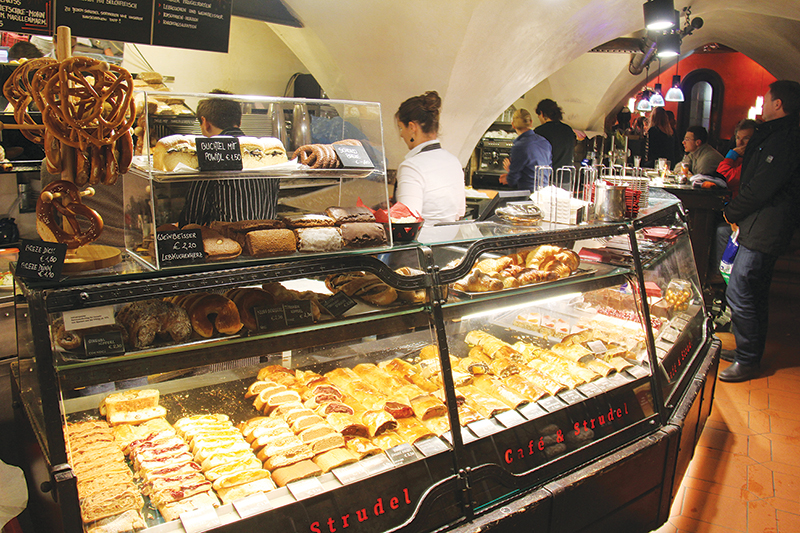 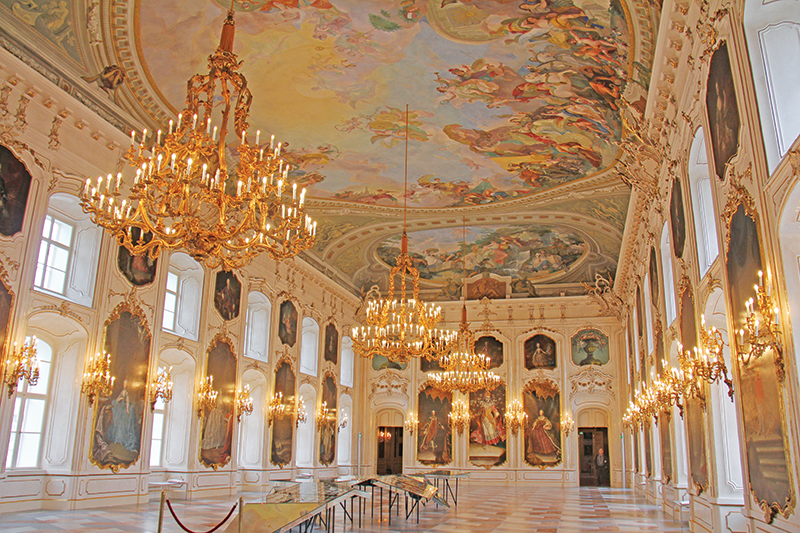 Hero on the hill

Curiosity piqued by the stories of Hofer’s battle, we head up to the former battleground to find out more. The Tirol Panorama Museum is quite striking on the outside, situated on a plateau above Innsbruck next to the Andreas Hofer Museum and just down from the Bergisel Olympic ski jump. Inside, we find a giant panoramic painting, 1000 square metres in size, but it is not the size that wows us; it is the incredible attention to detail and the lifelike feel of the painting. We look across the floor of the Inn valley seeing what Innsbruck looked like in 1809, with the smoke from gunpowder billowing out from too many guns. We pick out Andreas, our new hero, and are sorry when we hear later that he was shot to death for his efforts.

The view from the Bergisel Ski Jump over that same once gruesome battleground is very different. We go up to the top of the jump and see just how steep it is, wondering how the jumpers feel as they lift off into the air to glide over 100 metres. As they soar, we hope that they don’t think about the cemetery near the base, but rather look to the mountains ahead.

It is up these mountains we go on the very high tech and smooth Nordkettenbahnen cable railway with its stations designed by Zaha Hadid, before switching to a cable car from the Hungerberg up to the Seegrube, where there is a very fine restaurant and even finer views. From here we choose to go even higher up to Hafelekar, at a lofty 2256 metres. We marvel at the intrepid locals, hiking up and down and across these hills like mountain goats, and I shudder as a local tells me how people ride mountain bikes down the vertiginous slopes, or ski down them in winter. The panoramas from the top, down over the city and its valley, and across to the numerous peaks on the other side, are immeasurably beautiful. On a clear day you can see as far as Italy.

Innsbruck is well endowed when it comes to walking trails, with well-marked tracks up high in the mountains and down low linking the postcard-pretty holiday villages such as Igls, Lans, Aldrans and Rinn. A favourite is the Jochleitensteig hike around the Patscherkofel, accessed by cable car from charming Igls, but we regrettably don’t have time to do that, so choose to hike up to the Heiligwasser chapel, named for the healing waters found here. The chapel was built around the 1650s and pilgrims have been coming ever since, hoping for a miracle. We take a sip of the cool water at the spring in front of the alpine inn next door, before indulging in a lovely lunch of traditional Tirolean fare accompanied by an Almdudler – Austrian lemonade – or two.

Walking back down after lunch, we pass forests of green, a lush paddock with contented cows snatching at the grass, their bells clanging with each bite, and up above are those mountains, standing proud and serene as if safeguarding all and sundry in the city and beyond.

I think of another John Muir quote as I stride, joyful and happy down the hill. “In every walk with nature one receives far more than he seeks.” 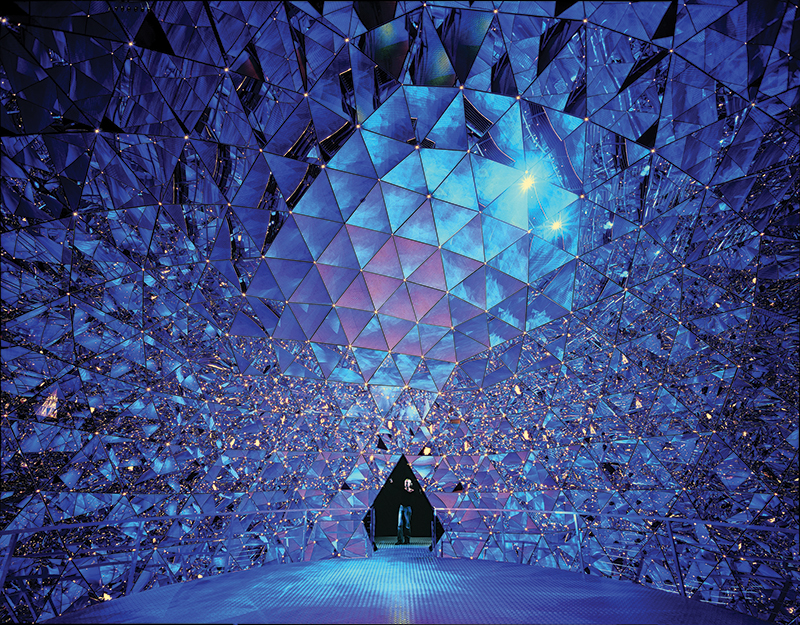 It all started with a little crystal mouse. Now Swarovski is a global behemoth in fashion, jewellery and design. Headquartered in the village of Wattens just outside of Innsbruck, where the alpine is at its purest, Swarovski reopened its incredible showcase – Swarovski Crystal Worlds – last year after a mammoth addition and renovation. No wonder it is one of the most visited sites in Austria. The entrance is mind blowing, the head of a giant carved out of a grassy knoll, a waterfall coming from its mouth. The inside is just as wondrous, with the five Chambers of Wonder containing ingenious displays that combine crystal, technology and innovation by world-class designers such as Alexander McQueen. Outside in the new gardens, the wonder continues with the highlight being the Crystal Cloud – a magnificent installation of grey clouds that float about a black mirror pool. The Cloud contains 800,000 hand-mounted crystals, and when I stand, open mouthed looking at it, the crystals shimmer and sparkle like fireflies, their colour reflected in the pool, along with the surrounding mountains. While there, have lunch in the excellent Daniels Restaurant, named after the man who started it all with that little mouse.

Emirates fly to Vienna or Munich via Dubai, with connecting through to Innsbruck with Austrian Air. Another most amenable option is to use the fast and clean Austrian rail system (OBB) connecting Innsbruck to both airports and delivering a very scenic, very convenient transfer.
emirates.com; oebb.at/en

Where To Stay
NALA individuellhotel is walking distance from most things in the city centre, and is a vibrant, modern property with a range of rooms to choose from. The onsite restaurant, Beretta is excellent and the garden area and rooftop terrace are lovely spaces to relax in. +43-512/584-444;
nala-hotel.at/en

Where To Dine
• Ottoburg dates back to 1180, and offers excellent traditional cuisine in several different rooms – or stubens. The second floor was the old sentry walk of the fortified building and you can still see part of the old city wall in the men’s bathroom. ottoburg.at
• Sitzwohl has two female chefs presenting a modern take on Tyrolean cuisine. restaurantsitzwohl.at