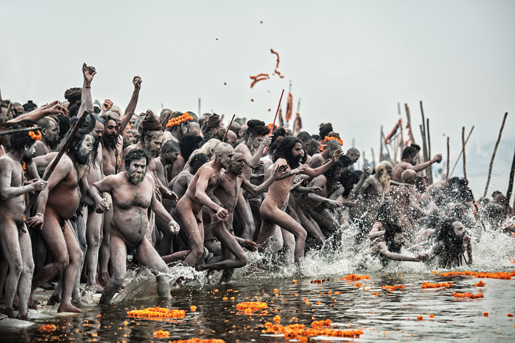 The Maha Kumbh Mela, is the largest gathering of people in the history of mankind, and India’s most important Hindu religious festival.

Sanjeev is very tired and feels cold. The journey that brought him together with his family from a small village in the south of India to the big metal bridge crossing the Ganges, not far from the first houses of Allahabad, has been very hard. As the extraordinary scenario appears in front of his eyes, through the rusty metal bars, any trace of fatigue is instantly erased. His eyes capture the boundless multi-coloured camp full of tents extending along the banks of the sacred river to Hindus, stretching to the horizon and wrapped by dense fog.It is a wet and cold dawn, and today is his first day at Maha Kumbh Mela, India’s most important Hindu religious festival, and the largest gathering of people in the history of mankind. He is there and you can tell from his face that this makes him very happy. Sanjeev is 15 years old, and he is just one of the ninety, or some say, one hundred million pilgrims from the remotest corners of the Indian continent. Each had travelled by any means of transport between January and March 2013 to participate in the most unique gathering in the world. The Kumbh Mela event traces its ancient roots in Indian mythology, which tells the story of an epic struggle between the gods and demons for possession of a jar full of the nectar of immortality, the Kumbh. The legend of the four drops of the divine liquid falling on Earth thousands of years ago became religion, originating in the holy cities of Ujjain, Haridwar, Nasik and Prayag, now known as Allahabad. From then on, the Kumbh Mela has taken place for centuries, every three years in rotation, which means it occurs at each of the four cities every 12 years. 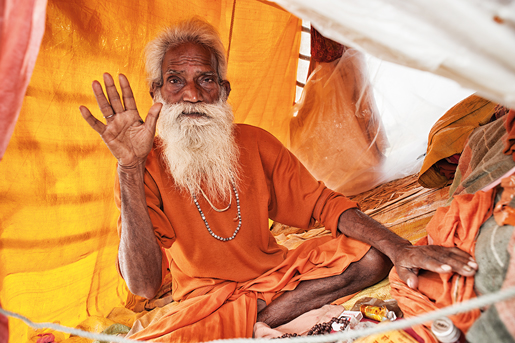 Allahabad, in the state of dell Utter Pradesh, is a very special city because this is where the slow, scrolling eyes of Sanjeev see the magnificent Ganges meet another of the great rivers sacred to Hindus, the Yamuna. The confluence of waters is made even more magical by the presence of a third river, the Saraswati. Some deny the existence of the latter river due to it remaining underground, and thus it retains an air of the mysterious.

The city accommodating the multitude of individuals coming from all over India is built in record time for the occasion. Its ‘houses’ are 600,000 tents that the Indian government has managed to assemble in less than two months, on the dry and sandy banks of the river. At a similarly unbelievable rate, a powerful infrastructure is created from scratch, comprising of tens of kilometres of pipes, electrical wires and metal plates, capable of providing thousands of new homes with drinking water, energy and facilities. This infrastructure furthermore includes roads passable by cars, tuk tuk, Indian prams, and all kinds of transportation.

Despite the great efforts of the government to make everything work, there is not however, room for everyone. Sanjeev and his family have had to settle for accommodation under a large plastic sheet that they share with other pilgrims. It is there that they will all sleep, prepare food, and stay warm for a few weeks by burning cow dung. 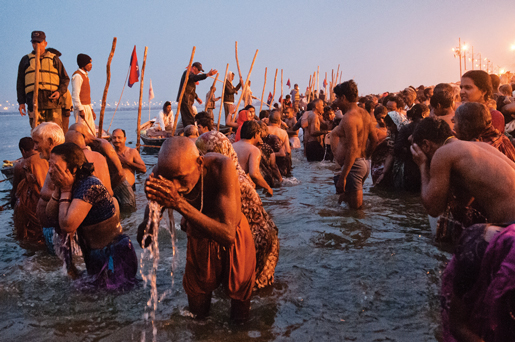 What drives people belonging to all castes to take such a trip, which for most is an intense and extreme experience? The Kumbh Mela is not just the Hindu equivalent of the Muslims pilgrimage to Mecca. It is a religious duty that at least once in one’s life the devotee should perform. However, bathing in the holy Ganges during the event guarantees, in fact, a much more concrete reward to the believer. It first means to stop for 13 generations the “samsara”, the reincarnation understood to be the continuous cycle of life, death and rebirth. The second reward is to return in Brahma, which is the Great and Ultimate Reality that encompasses everything. This takes place during the mass purification that reaches its apex in the great ritual baths, such as that of 10 February 2013.

Forty million people spent the night on the banks of the river along the Sangam, the beach where the waters of the three sacred rivers join, dipping and drinking water in big gulps. This water is considered among the most polluted in the entirety of Asia, yet it is viewed by the Hindus only as a beneficial “divine nectar”, able with its energy to heal every hurt.

Sanjeev is also there that night, resisting the bitter cold while accompanying his old grandfather, with whom he is immersed in the Ganges. Thousands of other people are making their ritual ablutions at the same time, under the watchful and concerned eye of hundreds of police and military officers.

Yet, despite the risks, the suffering and the indescribable confusion created by fearful movements of crowds, all the Maha Kumbh Mela is held in an atmosphere of overall joyful tranquillity. It is as if faith, like a powerful engine feeding the soul, prevents any violence. This spirit somehow ends up being transmitted even to the most indifferent visitor, who simply finds himself immersed in this experience, which from the sensory point of view, is absolutely extraordinary. The Western tourist arriving at Allahabad to savour the spirit of ancient India, is suddenly catapulted into a visual reality that is halfway between that of a heavy metal band concert and a boundless amusement park, with sparkling lights and colours and the noise of being. Big faces of the most famous baba on gigantic posters dominate the scene; and schools of mysticism rival each other with sets and décor worthy of the most gorgeous Bollywood films. 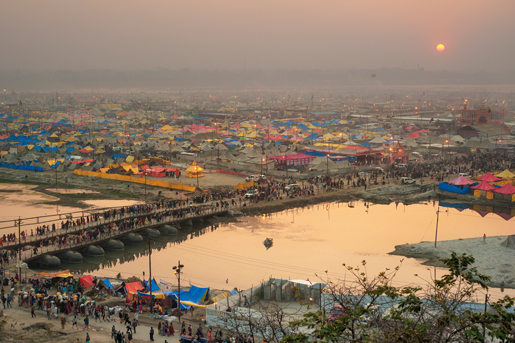 Behind this facade, with $100,000 SUVs belonging to holy men millionaires parked in front of the great temples of paper mache built for the event, there is more. The Kumbh Mela is like a spacecraft that has travelled through millennia of human history, continuing to this day in many respects identical to itself. Thousands of Naga Sadhus, mystical warriors who come from the most remote forests, from the deserts and mountains of the North of the country, take us back to an India of some millennia ago. Their interesting appearance, completely naked bodies sprinkled with ashes, their life of asceticism and meditation, leads all of a sudden to the image of humanity considered by many extinct, yet seems to be a rather proud survivor to modernity.

After the morning bath, Sanjeev and his family spend their day walking for miles on the dusty roads running through the city of tents. The great asharm, communities led by charismatic religious leaders are racing to provide hot meals to the needy pilgrims and places to sleep, under their large and colourful tents. No one should go hungry during a party that has as its cornerstone the concept of donation. This cornerstone theme is a powerful magnet that is likely to attract thousands of beggars, lepers, or just poor people from all over the content, recipients of the generous offerings of devotees. Even the Naga Sadhus, ascetic disciples of the fierce goddess Shiva, live off donations. Under the tents that house them, they give in exchange, a show of their most radical rejection of all pleasures of life, excluding use of hashish, with gymnastic exercises and extreme humiliation of the flesh worthy of the most famous fakirs.

Everything at the Kumbh Mela is extreme. The colours of the clothes of the holy men and their ritual hairstyles, the din of thousands of speakers that transmit continuously day and night, music and heartfelt appeals for missing persons, the cloud of acrid smoke that with nightfall takes shape along the banks of the Ganges. The smoke rises from thousands of improvised firepits, around which Sanjeev and other pilgrims try to escape, even if only for a few hours, the humidity and the cold that surrounds them.

United in a community whose strength sinks into the very roots of this ancient country, and through a spectacular and excessive feast, but at the same time deeply spiritual, the whole of India shows its most archaic and charming face with the Kumbh Mela. 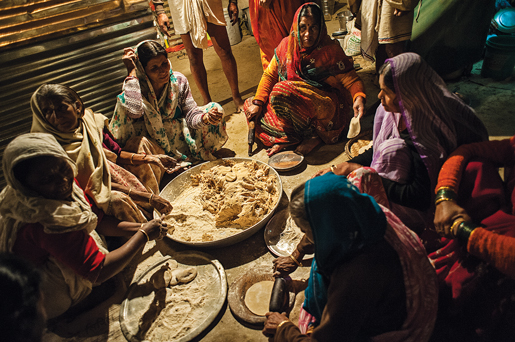 There are four Indian cities, in which every three years in rotation the festival of Purma (complete) Kumbh Mela takes place. Allahabad’s Maha (great) Kumbh Mela is on every 12 years.

Nasik is located in the state of Maharashtra and is known for being the largest producer of grapes in India. Full of majestic temples and impressive forts, the old city is crossed by the river Godavari, where the baths take place during the celebration of the religious festival. The next festival will be from August 15 to September 13, 2015.

Ujjain is situated on an arid plateau in the centre of the Indian continent, in the state of Madhya Pradesh, known for centuries as the route of the caravans of merchants. Ritual bathing takes place by stone steps which fall into the river Shipra. The next date is 2016.

Haridwar is located in the state of Uttarakhand and is crossed by the Ganges. The spectacular and colourful buildings of the old town built on the banks of the river, whose waters are not too polluted yet, make the scenario where the festival takes place particularly spectacular. The next date is 2022.

Allahabad (Prayar) is the most sacred city where the festival takes place, due to the presence of three sacred rivers that converge here along the beach of the Sangam. This is also due to the proximity of Varanasi, home to the Golden Temple, the most important of the Hindu religion. Many of the pilgrims continue their journey along the Ganges to the oldest and most inhabited city in the world, Allahabad. The next date 2025.