The castle city of Matsumoto is rich in Samurai history, but has plenty more strings to its bow. 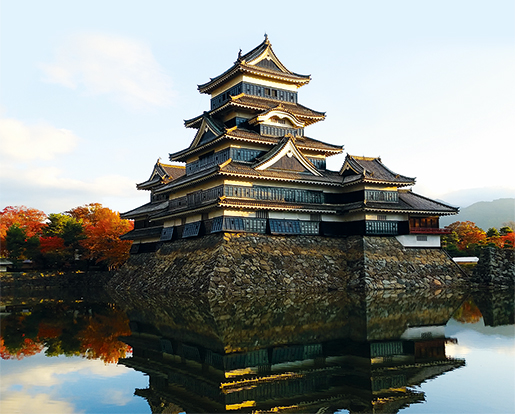 Although known to many Australians as a top ski destination, beyond the Olympic ski jumps at Happo-One and the towering peaks at Hakuba, many of the lesser-known towns and cities in Japan’s Nagano Prefecture are a must to explore for their long and rich history and a glimpse inside rural Japan.

One of the most renowned is the castle town of Matsumoto. Nestled at the foothill of the Japanese Alps, just a few hours from the neon lights and bustle of Tokyo, this picturesque town seamlessly blends the old with the new. The local Matsumoto Tourism Bureau bills it as the home of “Music, Mountains and Education”, and while the ‘education’ bit might not sound like fun, there’s much to be discovered about this happening little place.

At the heart of the town, and the first stop on any visit, is the 400-year-old Matsumoto Castle which gives the city its name. With its peaked gables and shimmering black tiles, the castle seems to hover over the flat plains of the town, like some fantastically inspired wedding cake. It’s one of four castles nominated as ‘National Treasures of Japan’ and the oldest castle in the country.

Inside are steep stairs and low ceilings winding past displays of armour and weapons from the Sengoku (Warring-States) period when the castle was built. As a piece of timing, [fortunately] the building was a bit of a failure. It was conceived at the height of a period of intense warfare between feuding samurai clans, but by the time the extraordinary six-storey structure was completed in 1614, Japan had entered an era of stability that lasted for the next two and a half centuries.

Every autumn, a ‘Moon Viewing’ party is held on the grounds in a specially built room of the castle. It’s said that the moon can be seen three times from the viewing room – in the sky, in the water below, and in your cup of sake. It’s said you’ll see six if the sake is strong!

Across a small bridge on the way to the castle, Nawate-dori is a charming narrow stone-paved street full of restaurants, antique shops and tiny stores selling everything from kimonos to books. Oddly, the street has a recurring frog theme, and you’ll find plenty of souvenir shops selling cute frog trinkets. It’s said that a frog will help things return to you – pretty valuable as a gift for a friend who often misplaces things.

The beautifully restored buildings and houses on Nakamachi Street have earned it the title ‘Old House Street’; although with more than 40 restaurants, it’s also known locally as ‘Gourmet Street’.

If you’re in the market for traditional Japanese clothing, visit Gaku on Daimyocho Street, an antique shop selling old kimonos, yukatas (summer kimonos) and obis (traditional Japanese sashes) at reasonable prices. In the back is a collection of beautiful antique kimonos. They’re pricier then the ones outside, but you’ll soon see why.

Matsumoto’s oshiebina are also a popular art from the middle of the Edo era. It’s said that the ladies of the castle made these fine embroidered dolls, each an individual piece with a different costume and a different face. It’s an art form that is slowly disappearing, but being kept alive by the wonderful old couple at the Belle Amie Doll Shop. Stop by and check out their exquisite collection, with some very rare old examples and hand-crafted items for sale.

For an insight into the origins of Japanese art, the Japan Ukiyo-e Museum is a must. The museum houses the largest private collection of woodblock prints, paintings screens and old books in the world, with more than 100,000 pieces collected over several generations by the Sakai family. Here you can buy limited edition prints by some of Japan’s greatest masters. For a completely different perspective, contemporary artists, including works by Matsumoto’s own internationally celebrated, Yayoi Kusama, can be seen at the Matsumoto City Museum of Art. The town’s music theme comes from the fact that Matsumoto is also home of the famous Suzuki method of teaching music. 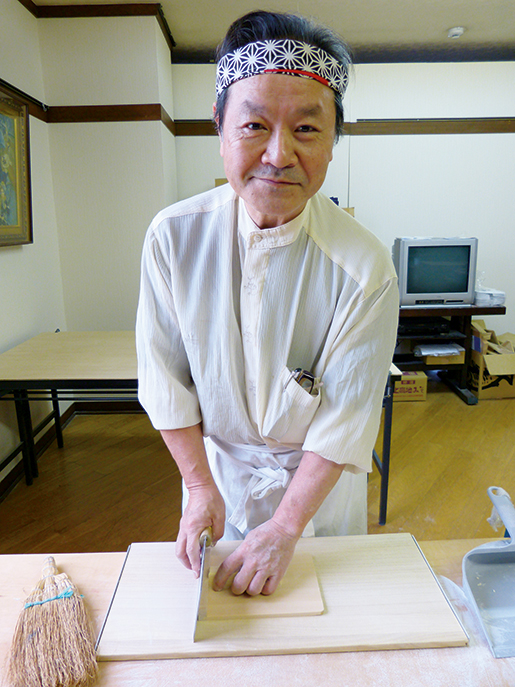 Oodles of noodles
Nagano is the centre of soba (Japanese buckwheat noodles), but it’s said that Matsumoto’s soba is outstanding. At Takagi you can learn the art of soba making from the practiced hands and seriously sharp knife of master, Ken Takagi, whose family has run the restaurant for five generations.

Tagaki’s wife also runs workshops in the traditional craft of temari ball making, another of the symbols of the city, which are said to bring good fortune. You can also buy lovely high quality ones at the souvenir shop below the restaurant. 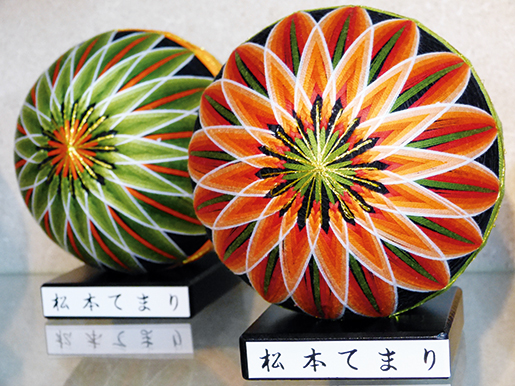 The chance to dine with a real Sumo wrestler is an opportunity to good to miss, Sumo-tei is run by a former Sumo champion, Tochi Sagami, who will fill you up with a Sumo-sized ‘Chanko Nabe’ a ‘secret stew’ of meat and vegetables eaten in vast quantity by sumo wrestlers. Having your photo taken beside a real Sumo wrestler, weighing in at a mere 175 kg, is also a good way to make yourself look slimmer in your Facebook posts.

For a sublime dining experience, the Matsumoto-kan restaurant is the pinnacle. Originally opened in 1890, the restaurant is a designated ‘National Cultural Property’ which showcases Japanese tradition and the transition of the seasons through its cuisine. The ceilings are hand-painted painted and carved with birds and flowers – it’s like a Japanese version of the Sistine Chapel, and its sophisticated and delicate dishes are as flawless as the artworks.

At the other end of the scale, the Old Rock Pub is based on the style of an English tavern and is the most popular pub in town, serving Guinness on tap and Western-style dishes with a Japanese twist.

Beyond the city
Matsumoto is the gateway to Kamikochi, Norikura and other scenic areas in the Chubu Sangaku (Japan Alps) National Park. Venture a little south of the city, and you’ll find the postcard-perfect Kiso Valley, dotted with small towns that were originally part of an historical road connecting Kyoto and Tokyo.

The town of Narai-juku will give you a taste of what Japan was like when samurai travelled these roads. In ancient times, Narai-juku was traditionally where travellers heading from Kyoto from Tokyo took a rest before the difficult Torii Pass. The buildings that line the kilometre-long main street remain much the same as they were back in the Edo period (1603-1868), although today there are many gift shops lining the main street along with small restaurants. Make sure to visit the lovely Shizume Jinja Shrine. Just near the station there’s a site with 200 stone Buddhas, all with different expressions on their faces. Trains run every two hours from Matsumoto and the journey takes one hour.

Also within an hour is the remarkable Daio Wasabi Farm, Japan’s largest. Its restaurants offer not only the popular soba noodles with freshly picked wasabi, but also wasabi-flavoured ice cream, wasabi chocolate, beer and pretty much any wasabi-themed product you can imagine.

Where gods descend
About 50 kilometres west of Matsumoto, the Norikura Kogen and Kamikochi area officially boasts some of Japan’s most stunning scenery. Mount Norikura volcano is the tenth highest mountain in Japan. When I visited in Autumn, a palette of red, gold, orange and yellow framed the landscape of snow-capped peaks. It’s the best time for hiking, mountain-biking and rock climbing.

Kamikochi, which roughly translates as ‘where gods descend’, is the prime attraction of the national park. Saunter along the Azusa River and you’ll see the crystal clear waters reflect the mountains like a mirror. A little way along the river is the Kappa Bridge, one of the most photographed places in Japan. Nearby, there’s a monument to the British missionary Walter Weston, who introduced western-style mountaineering to Japan and opened the Japanese Alps to the world. There are some gorgeous places to stay in the Kamikochi valley including the Imperial Hotel, the sister of the high-end Tokyo property, along with traditional ryokan (traditional Japanese inns). Take note that many hotels in this region only take cash, so you probably won’t be able to use credit cards and there aren’t any banks or ATMs in the area. 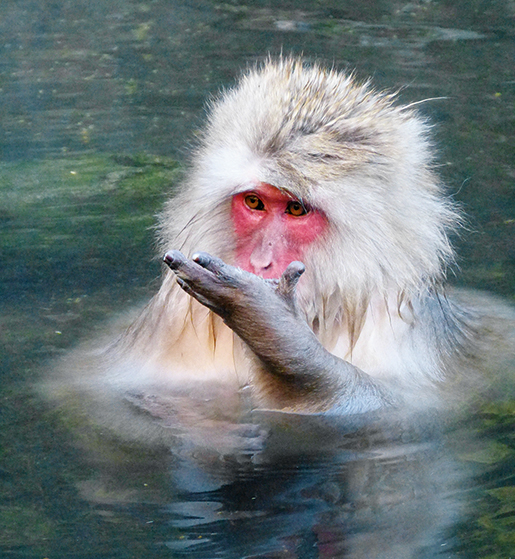 Monkey business
One of Japan’s most popular images is that of the Japanese macaques that bathe in the natural hot springs at Jigokudani Yaen-Koen, which is only about two hours by train from Matsumoto. Called ‘Hell Valley’ because the hot water bursting from the earth’s surface was thought to resemble the place. However it’s monkey heaven, and from late October to early April you can see them bathing in their steaming onsen. Don’t even think about getting in the hot pools with the monkeys. For a start, the water’s about 50 degrees, and the floaty things aren’t pine cones.

So to the city of ‘music, mountains and education’, add Matsumoto’s wonderful wildlife, samurai history, sumo-sized experiences, superior soba, and a journey into the heart and soul of Japan to the list. •

Getting There
Qantas flies daily direct from Sydney to Tokyo with connections to other Australian cities; 131-313; qantas.com.au
Matsumoto is 230 km from Tokyo and best accessed by rail. The Narita Express (N’EX) from the airport to Tokyo takes one hour. Matsumoto is 2.5 hours from Tokyo or 1 hour and 20 minutes from Nagano city by shinkansen (high speed train).

Getting Around
The ‘Town Sneaker’ city circle bus, decorated with Yayoi Kusama art, covers all of the city’s major attractions. One-day ticket is 500 yen (approx AU$5.00). Free bikes are available for use around the town, enquire at your hotel.

When to Go
Matsumoto is the third sunniest city in Japan. Mild temperatures and autumn colours make September – November a spectacular time to visit.

Where to Stay
Hotel Buena Vista is comfortable and great value and located mid-town within easy walking distance of major attractions, restaurants and train station; +81-263-37-0111; buena-vista.co.jp/en