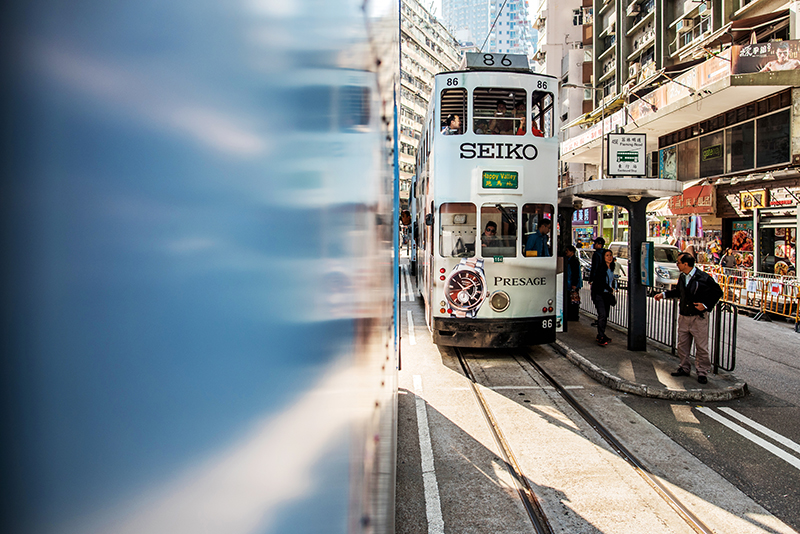 Ever travelled on a ‘ding ding’? You may have, but you just didn’t know it.

The endearing nickname is onomatopoeic. Whenever the trams pull in and out of a tram stop or go head-to-head with that other transport icon, the little red Toyota taxi, the high-pitched ‘ding ding’ is the old-fashioned warning sound that sings out into the traffic. 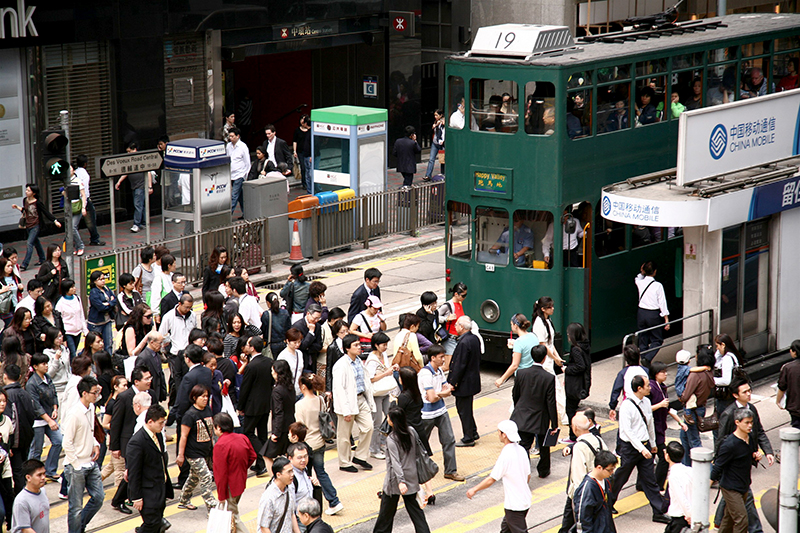 Ding dings came into being in 1904, on a single-track system that ran from Kennedy Town in the west to Causeway Bay. The extension to Shau Kei Wan at the eastern end of the island was added later and by 1922 the loop around the racecourse in Happy Valley, the only deviation from the relatively straight line, was complete.

In 1925, the first enclosed double-decker came into being and the archaic exterior design has hardly changed since, albeit for the flashy advertising campaigns that now distinguish some of them. 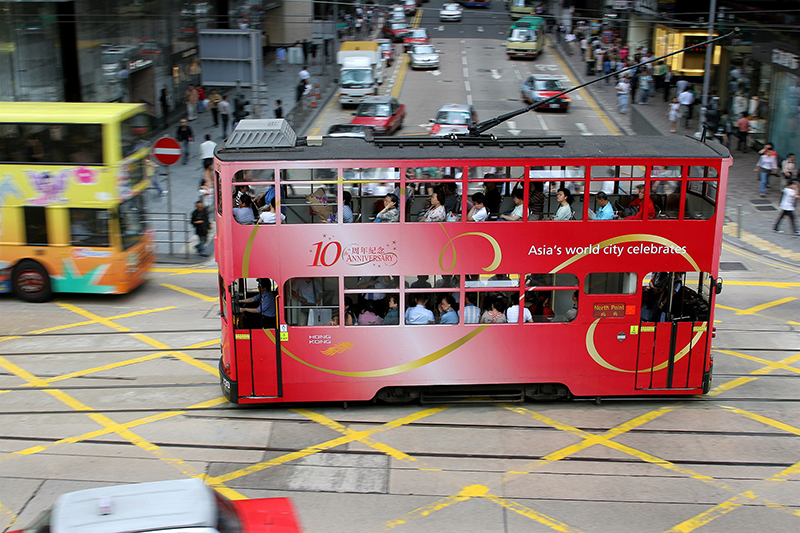 Much like a passage on one of the Star ferries – those century-old antique vessels that still ply Victoria Harbour, a ding ding ride is a quintessential Hong Kong experience.

Even better, taking a jump-on jump-off approach provides a novelty, easily navigable and, at HK$2.30 (AU$0.37) a ride, is a cheap means of exploring some of the small and intriguing neighbourhoods that have developed along the route. Sheung Wan is one of the first stops heading west from Central towards Kennedy Town.

Like older residential pockets in cities the world over, this one has evolved into a hipster hot spot with hidey-hole eateries, corner cafes, artisan sourdough bakeries and cool designer retailers. 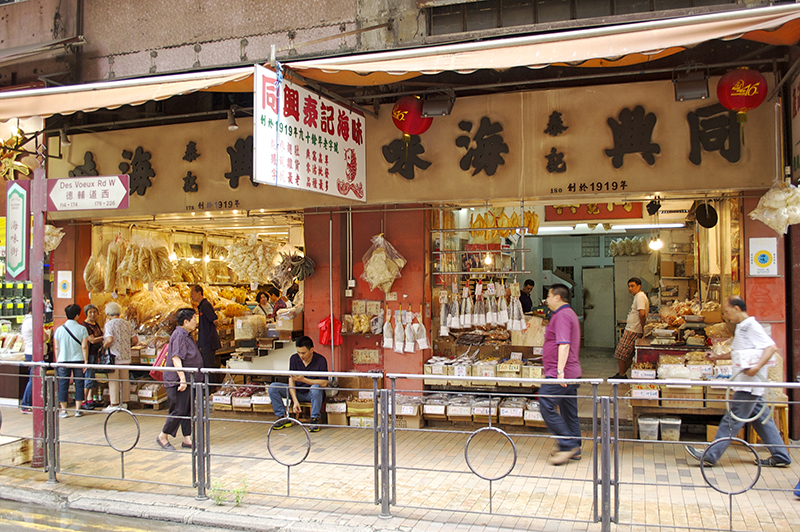 Prepare for a steep walk to the intriguing Hong Kong Museum of Medical Sciences in a statuesque old-heritage building, then saunter back down through some of the little tree-shaded pockets.

The Police Married Headquarters, or PMQ, is a renovated heritage building with 100 or so studio-cum-shops dedicated to Hong Kong’s craft and design set. 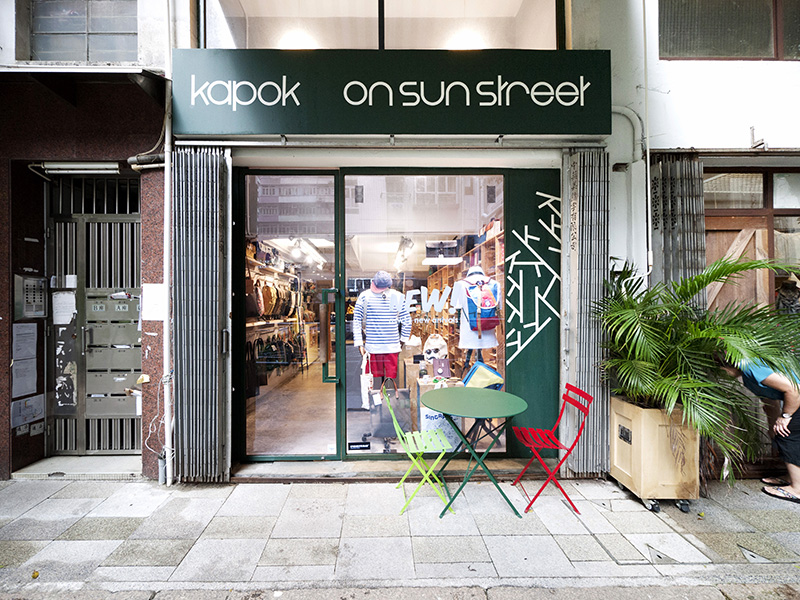 Sniff the air for the incense emanating from Pak Sing Temple. Sheung Wan seamlessly merges into the smaller but equally intriguing next-door neighbourhood of Sai Ying Pun, lovingly known as the Pun. From the tram, it’s recognisable by the traditional Chinese medicine shops that still line Des Voeux Road West. 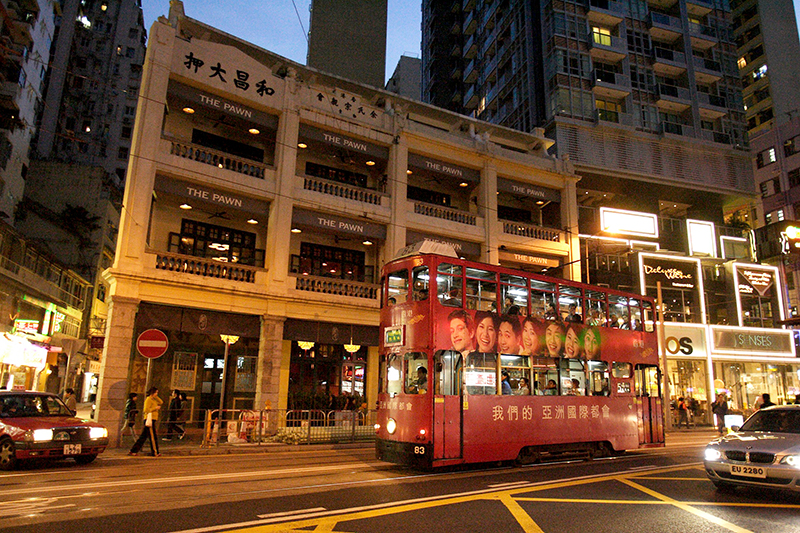 These traditional trades are interspersed with Gen Y favourites such as Ping Pong Gintoneria, a neon-lit gin bar in an old table tennis hall. Back on the tram, continue to Kennedy Town, fondly known as K-Town, a waterside suburb at the end of the line.

This area, which, like the Pun, is newly gentrified with the help of an MTR train station, still has shops with red plastic lampshades hanging over the fruit and vegetables, but they’re likely to be next door to global eateries such as Bistro Du Vin (French), Fugazi (Japanese) and Chino (Mexican).

Davis Street and New Praya promenade have a seaside ambience with eateries that have tables taking in moody views across the water to the city’s distant ports. Heading West in the opposite direction past Central, the tram route doglegs past the old colonial government buildings on one side and the architecturally intriguing HSBC building on the other. 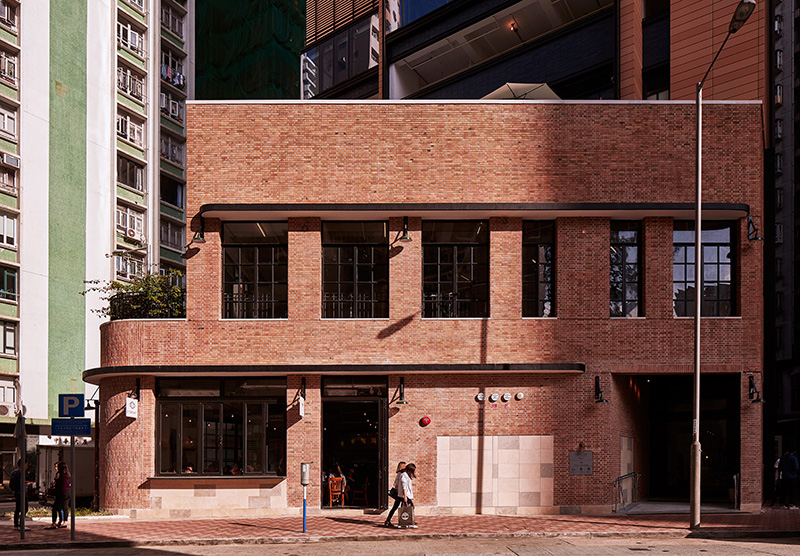 Soon after, alight in Wan Chai. This former coastal fishing village, now hemmed in by reclaimed land, is one of the city’s busiest, with a cross-section of wet market streets, world-class restaurants, mega high-rises and old shophouses.

For an eye on the old days, navigate to the Blue House, an historic tenement block now operating as a museum, and lovely old Pak Tai Temple, hidden in the backstreets. 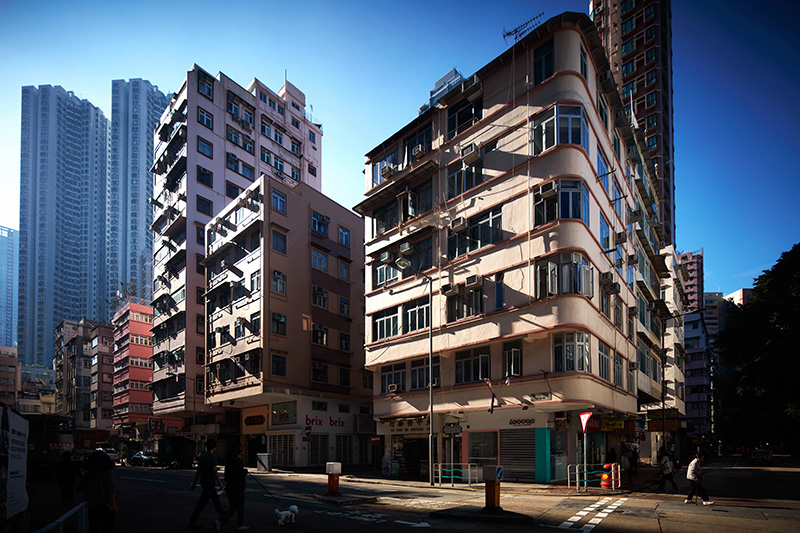 The Wan Chai Street Market is a sensory adventure with stalls selling everything from pig’s ears and flapping fish to cheap factory clothes and plastic-fantastic toys.

Star Street Precinct, including the quiet enclave of Sau Wa Fong, is, in contrast, a heavenly pocket of calm with pedestrianised streets sporting local boutiques like Kapok, hidden bars such as Ted’s Lookout and edgy art galleries.

For a party vibe, head to Ship Street where 22 Ships serves authentic Spanish tapas and Bo Innovation has a degustation menu that traces the history of Hong Kong food. 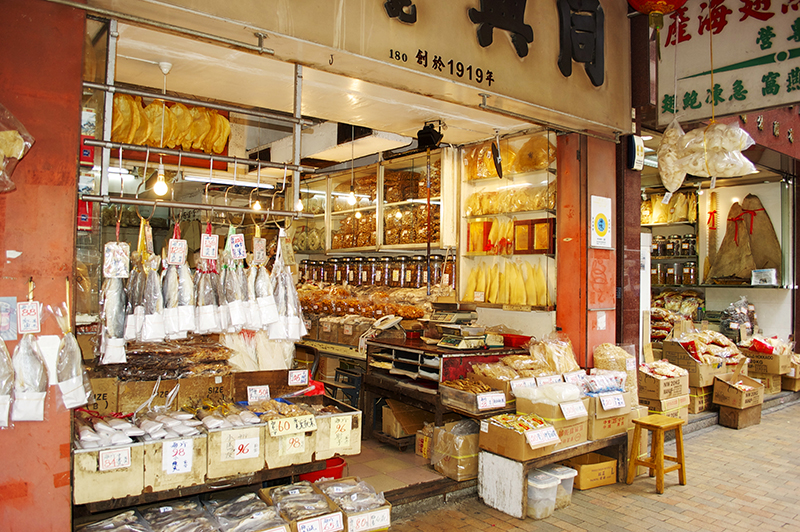 Take in one of the world’s busiest pedestrian crossings at Causeway Bay but do it from the top deck of the tram and get off a stop or two later near the charismatic low-rise neighbourhoods of Tin Hau and Tai Hang.

Once the home of the car mechanic trade, Tai Hang’s grid of streets, wedged into the hills behind Causeway Bay, has quietly got its groove on as an enchanting place for a stroll among esoteric shops, small one-off bars and speciality eateries. 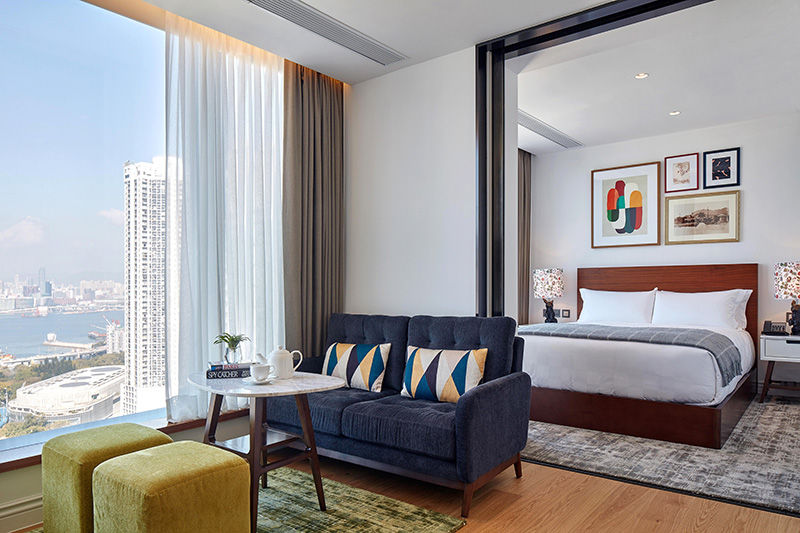 The neighbourhood’s most recent addition is Little Tai Hang, a residential hotel with rooms that have artisanal touches and views across Victoria Gardens to the harbour.

Celebrity chef May Chow’s Second Draft is here, with 20-something craft brews on tap and, up above it, home-style Italian joint Bond has a good vibe with an al fresco deck. 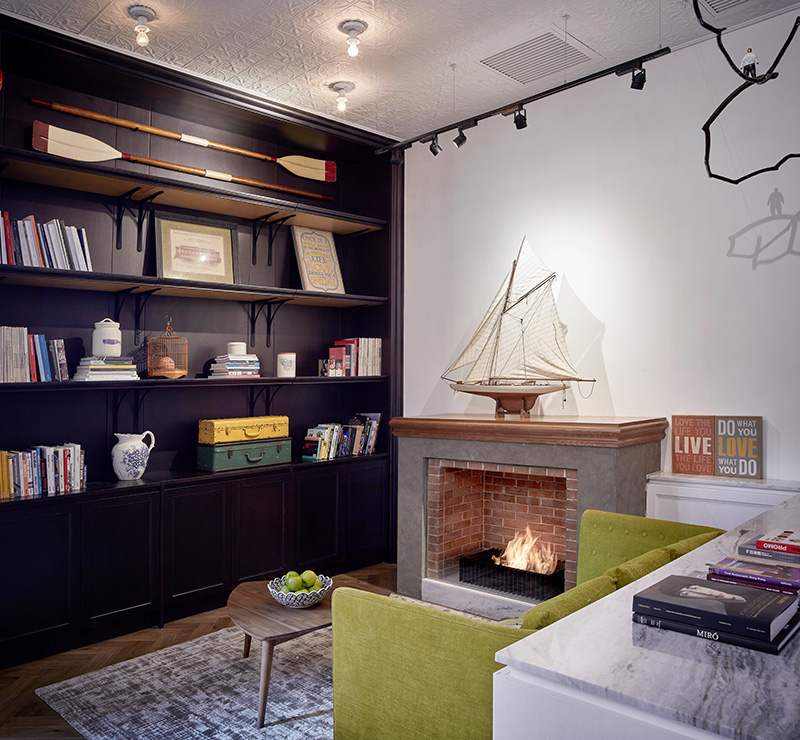 For a dose of culture step into Lin Fa Kung to glimpse the lotus lanterns glowing in the dark, or the 18th century Tin Hau Temple.

The local food stalls also rate, including Bing Kee Tea Stall known for its old-school décor and pork chop noodles. Speaking of food, you’d be forgiven for jumping off the tram at North Point for the sole purpose of tracking down Tim Ho Wan, an offshoot of the original dim sum restaurant that shot to fame about a decade ago for serving the cheapest Michelin-starred dish in the world. 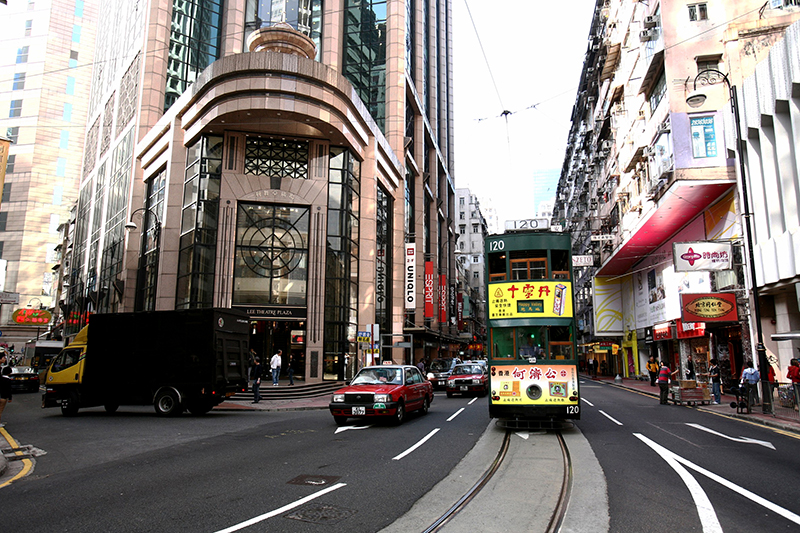 Located in the midst of one of Hong Kong’s biggest housing estates, it’s as much an off-map adventure as it is a mecca for foodies hunting down that famed barbecue pork bun.

Housed in the local municipal building, the wet market is where rowdy Tung Po Kitchen serves seafood favourites such as deep-fried grouper. 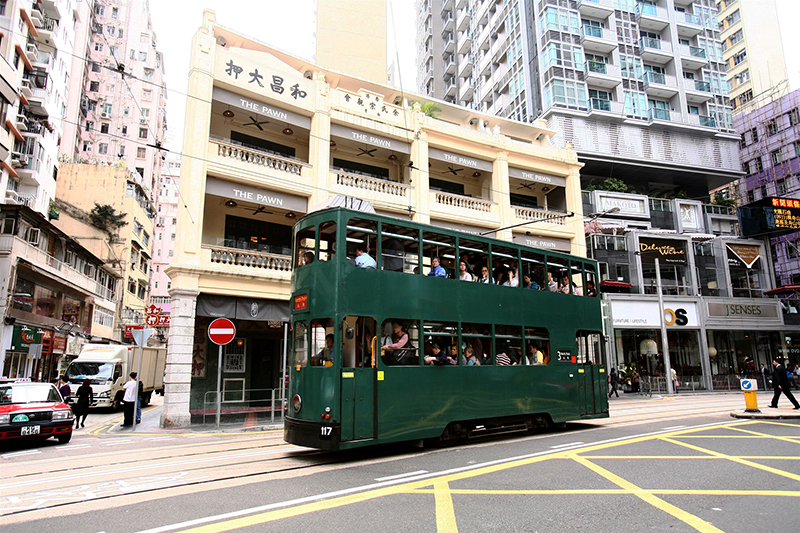 Up ahead, the tram continues to Shau Kei Wan. If you’ve got the time, stay on the line. If not, save it for another day. Hong Kong trams have been rattling this line for over a century and they’re not going anywhere soon. Ding ding! •

When to go
March to April and October to November are the best times to visit with milder temperatures.

Where to stay
• Little Tai Hang is Hong Kong’s hippest new boutique hotel in one of the city’s up-and-coming neighbourhoods. +852/3899-8800; littletaihang.com/en/• The even newer luxury Murray Hotel has pride of place right on the tramline in Central. +852/3141-8888; marcopolohotels.com