Barely three hours flying time out of Sydney, the island of Norfolk in the South Pacific, can take you back to the feeling of a country town. Every passing driver greets you with a nod and a wave, doors are left unlocked and the quiet is punctuated by rooster crows and the mooing of Norfolk’s roadside mowers. 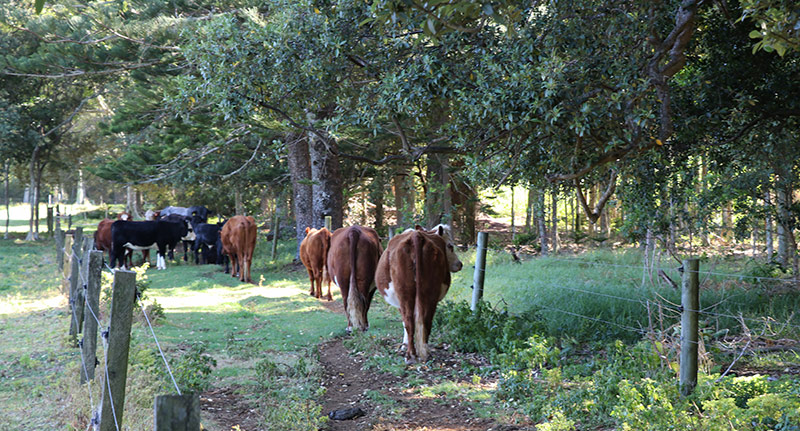 Rising along the ridge line that runs between New Zealand and New Caledonia, Norfolk Island was created by volcanic activity around three million years ago. Polynesians settled here awhile along their pacific seafaring route around 600-800 years ago but then mysteriously disappeared. Norfolk was then settled as a colonial outpost, and later, convict settlement by British First Fleet arrivals in the late 1700s through to the mid-1800s. Norfolk’s defining settlement though, would be the arrival of the descendants of the Bounty mutineers from remote Pitcairn Island in 1856, who make up the core of the island’s 1,800 inhabitants today, as the island was gifted to them by Queen Victoria. 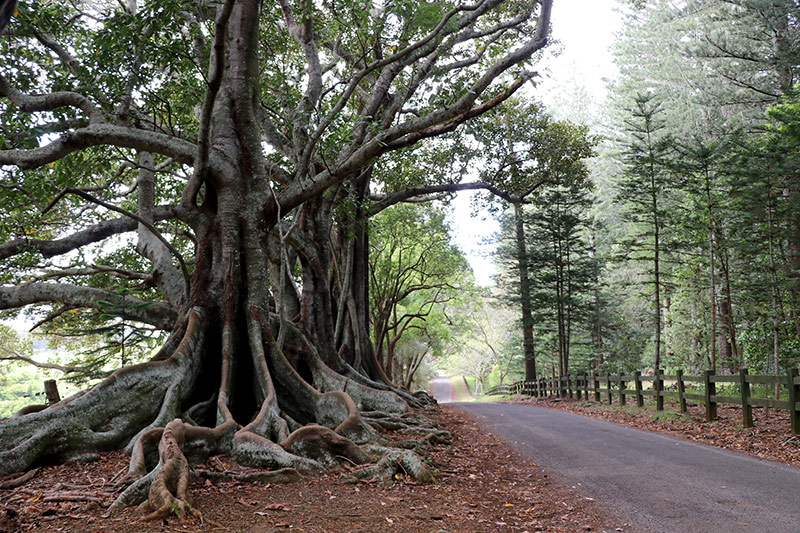 If you have a left side window seat on the flight in, you’ll get a bird’s eye view of the dramatic coastline meeting the deep blue sea which frames this small island, a patchwork of farmland and lush forested areas. Norfolk boasts 32 kilometres of coastline and 170 kilometres of roads, many no more than country lanes. You’ll know you’ve arrived in the central township of Burnt Pine when you rattle over any of the cattlegrids ringing the town to keep the livestock out. When you’re driving your little hire car all over the island and giving the Norfolk wave to oncoming cars, you’ll also need to remember that Norfolk cattle have right of way over any other local traffic as they meander across the roadside verges, keeping them trim as they graze freely. 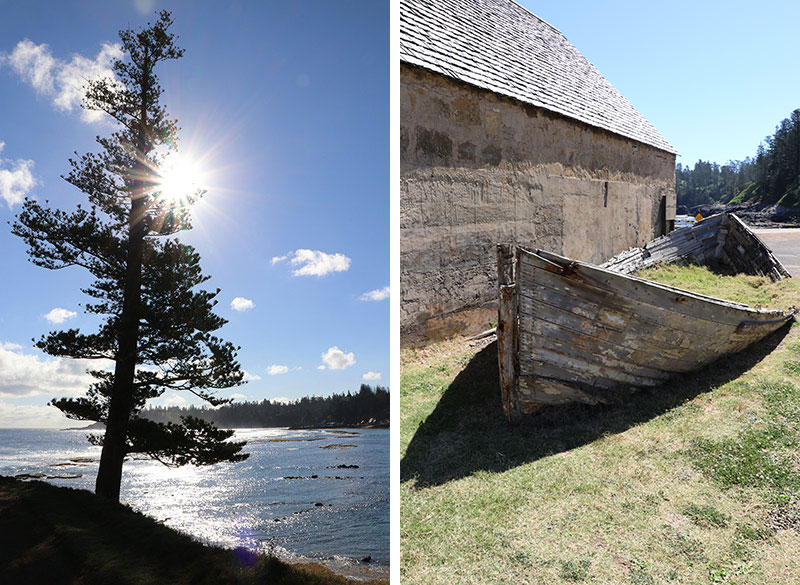 We spend an afternoon touring Norfolk with local guide and natural history expert, Margaret Christian (yes, part of the family descendant from Fletcher Christian). With stunning view stops overlooking the Kingston historic area, Anson Bay, Mount Pitt in the National Park, and visits to Bloody Bridge, St Barnabas’s Chapel, the Cascades and the Captain Cook Memorial, we pack in an impressive overview of this lush isle which sets our bearings for our visit perfectly, as well as mining a great deal of local history and culture, anecdotes and insights from Margaret. 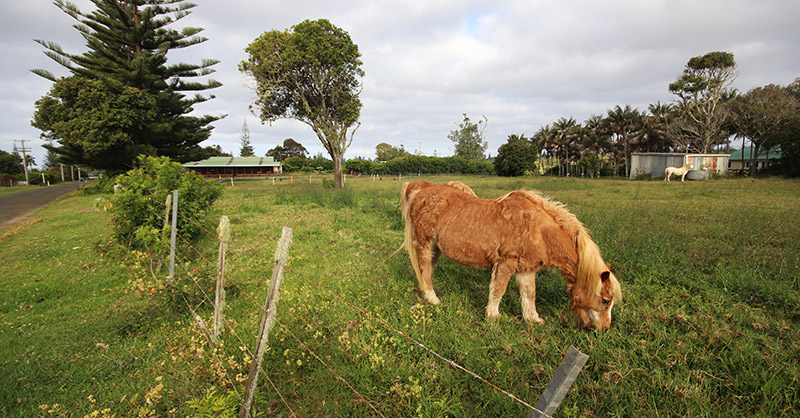 Alongside the Queen’s English, Norfolk Islanders speak their own unique ‘NorF’k’ language, which is a mix of 18th century English, Tahitian and a smidgeon of gaelic. Catch anyone having a local conversation and you’ll only half recognise parts of words, but over time you can come to pick up the jist of talk. As descendants of the Bounty Mutineers, the range of surnames on the island is limited. Many locals are often purely known by their nicknames their whole lifetime, so that the local phone directory has a number of pages set aside to “Faasfain ‘Salan Bai Dems Nikniem”; to fast find a person by their nickname – the directory for ‘Bing’, ‘Dids’, ‘Honey’ and the like. 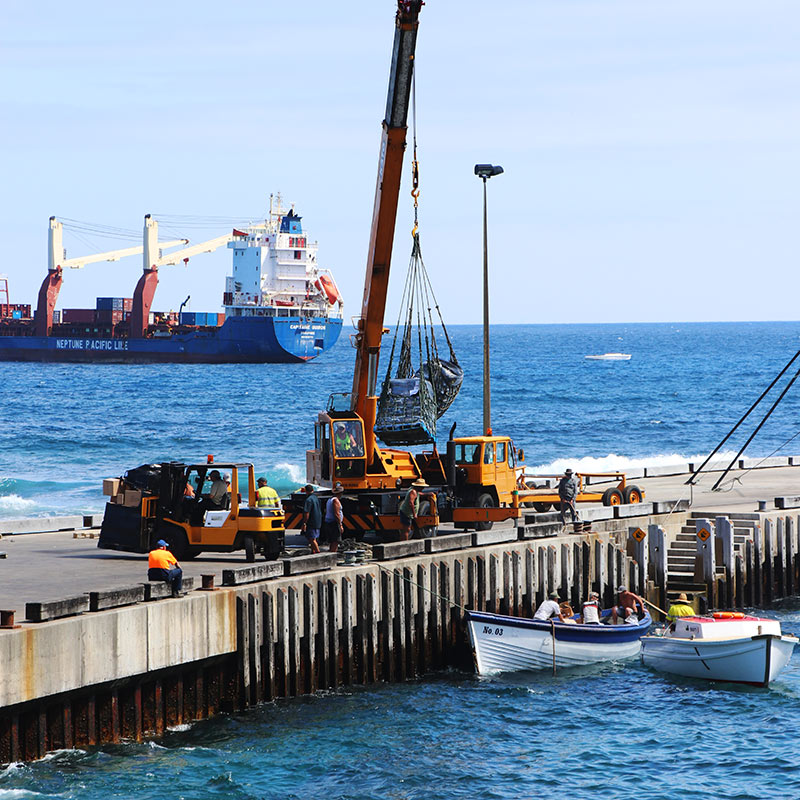 Norfolk boasts rich volcanic soil, and locals supplement brought in supplies with fabulous locally-grown produce. We arrived in a glut of avocadoes and passionfruits, and had just missed the berries. From roadside stalls working on an honesty box system we could pick up vegetables, bananas, avocados and the juiciest and tastiest Hawaiian passionfruit. Our visit also coincided with the Norfolk Island Agricultural Show Day – a national holiday and expo of the island’s best produce, flora and local dishes set up in the Town Hall alongside markets, equestrian events, fair rides and entertainment. Where else could I have seen the prettily speckled “Whale Bird” eggs which Norfolk Islanders enjoy as a delicacy, but which can only be gathered in season for six weeks of the year from the inhospitable Phillip Island at Norfolk’s southern extreme? 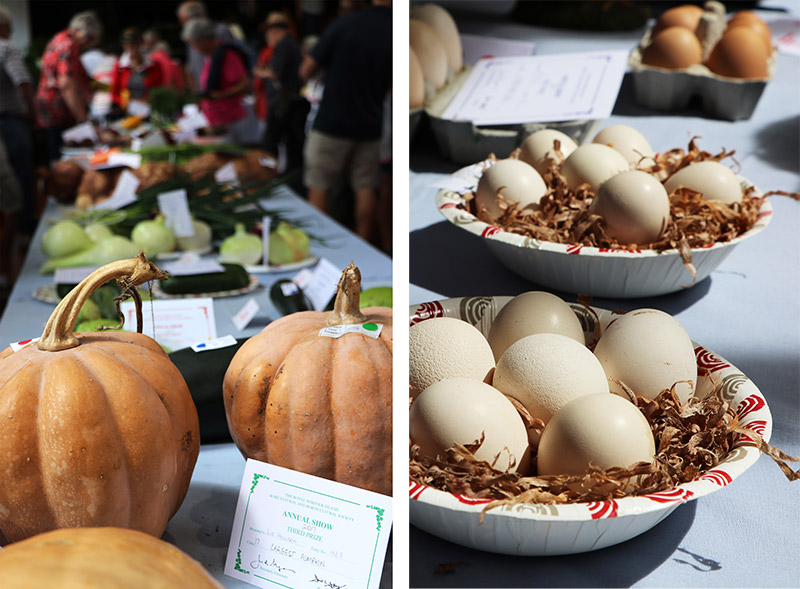 Along the southern approach of the island is the World Heritage Listed, historic area of Kingston and Arthur’s Vale, where the concentration of convict sites and museums are a focus for exploring the island’s culture and heritage. Many visitors come to find the links to their convict ancestors here through local records and the convict cemetery, or to relive history. Once a month you can visit Government House on an open day to explore its history-filled rooms, gardens and central courtyards, and enjoy the views through the majestic Norfolk Pines, over the vale and through to the sea. 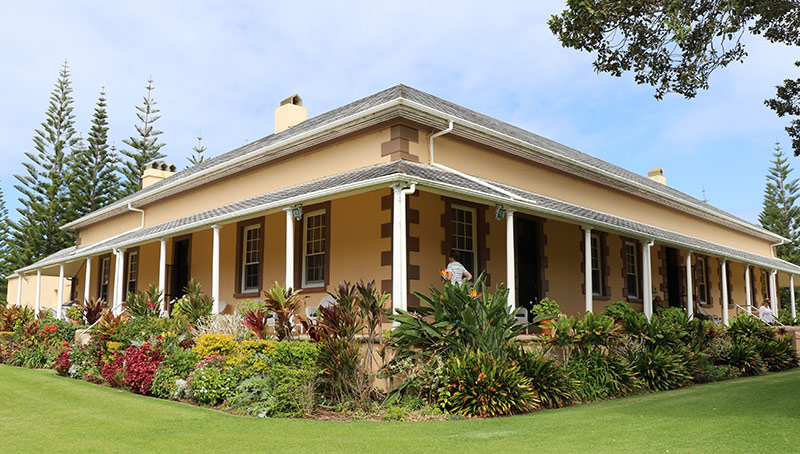 Nearby, Kingston Pier becomes a focal point for both locals and visitors every five to six weeks when the supply ship is in. Norfolk Islanders rely on the shipping of almost everything from their chocolate Easter egg supply, apparel, bulk foods, major and minor appliances, to cars and other heavy vehicles. With the lack of a safe harbour, two traditional timber ‘lighters’ are towed out by motor boat from Kingston Pier – back and forth to the ship anchored offshore to bring the cargo in by hand. This can take a few days to a week, attracting visitors to the shore to view the general proceedings or watch over as maybe a minibus is balanced over two lighters to be carefully brought in. If the sea is unkind and rough, the supply ship may have to move on without unloading to keep to schedule, and locals miss out and make do until the next drop. 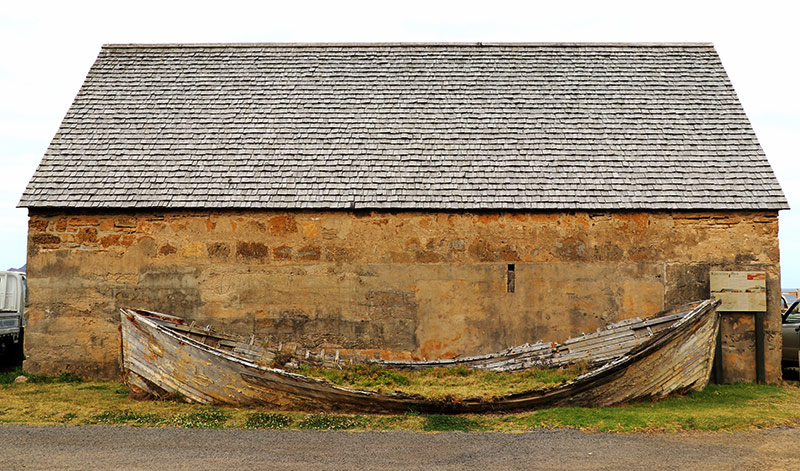 Along from Kingston Pier are the picturesque and inviting (if somewhat dramatically named) Slaughter Bay and Emily Bay, teal blue swimming bays protected by the second most southern coral reef in the world. The Lone Pine stands sentinel at the entrance to Emily Bay, and is so old as to have been visualised in the historic drawings by British explorers. Swim out into Emily Bay only a few tens of metres and you’ll find yourself snorkelling over an amazing expanse of corals with passageways and alleys leading you throughout the bay, passing over beautiful large fan-shaped and brain-shaped corals, sighting vibrant subtropical fish as they dart in and around their hidey holes. Further around the island, there are more snorkelling spots to discover and surfing beaches, or you can take to the sea in an outrigger or sea kayak for a different view of Norfolk. 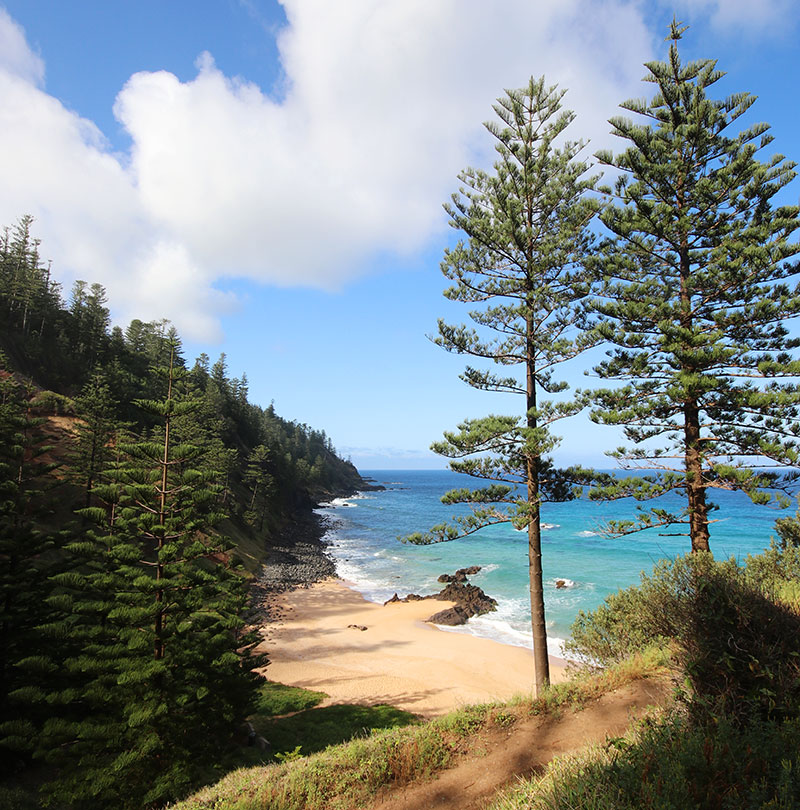 For a small island, Norfolk offers a large number of tours and experiences, and a calendar of events over the year on which to base your visit. Jazz, country music or ukelele festivals are scattered over the year and there are photographic or art workshop tours to explore Norfolk with. Or you can enjoy the island’s local produce and meet the locals by joining one of the bi-weekly progressive dinners for a three-course meal moving between three different Norfolk family homes. Museum tours, heritage tours, fishing, cruising or trekking – there is something for everyone on Norfolk. 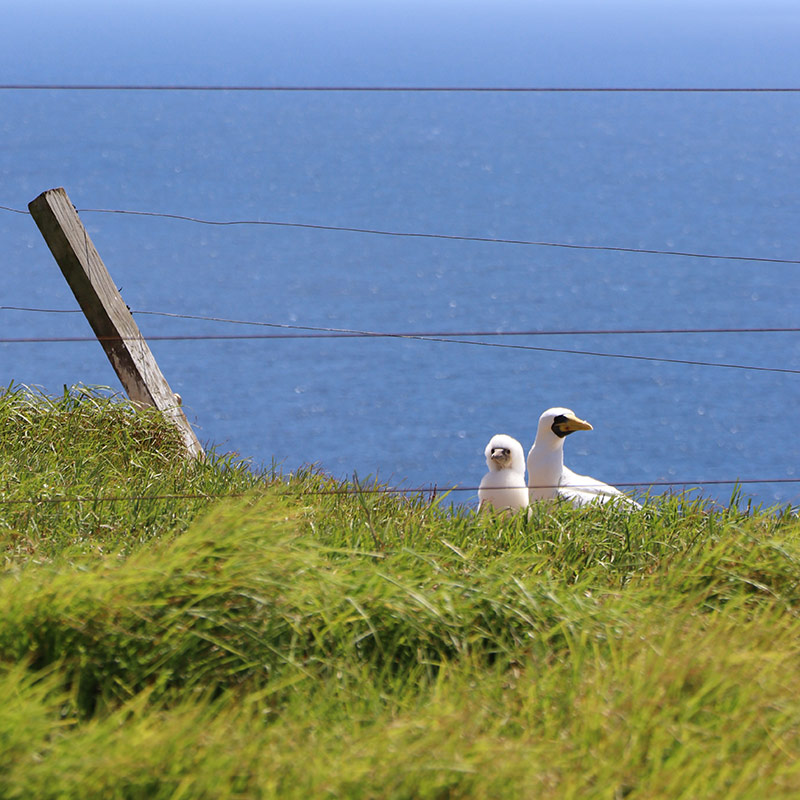 A ‘Wild Mob’ brought me to Norfolk Island this time, as I combined my island holiday with a Volunteer Conservation Project, one of a number held over the year in collaboration with Norfolk Islanders. While our afternoons and nights were free to enjoy island life, our mornings over the week involved team work on local properties to clear introduced weeds that smother native habitats, survey plant regeneration areas or scour one of Norfolk’s stunning beaches to clear any marine and plastic debris washed in. 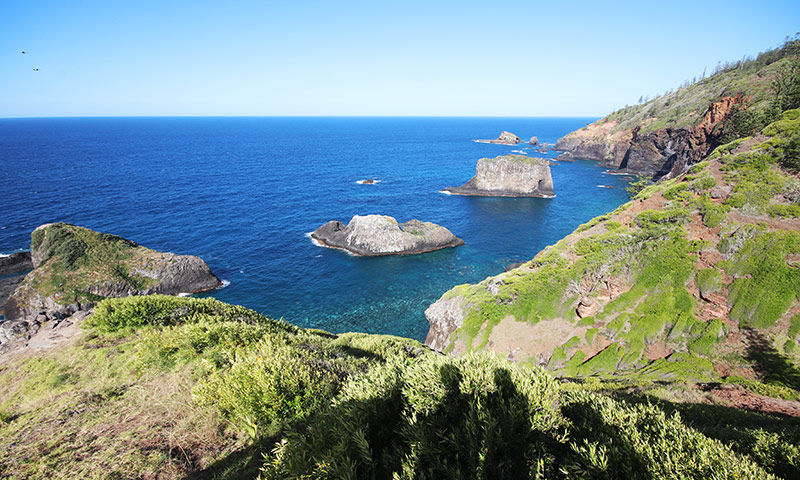 Wild Mob collaborations over the years on Norfolk have helped clear introduced predators from parts of the island and rehabilitate areas important to sustaining local and endangered species. Visiting one of the seaside properties, we were able to (quietly) see the fluffy fledglings of the booby birds that have returned to nest on the cliff lines now that their predators are diminished. We spent another afternoon walking through rainforest along the lush Palm Glen circuit track and managed three sightings of the rare Norfolk Green Parrot, which has recovered from near extinction to a population of a few hundred currently, through these conservation efforts over the years. 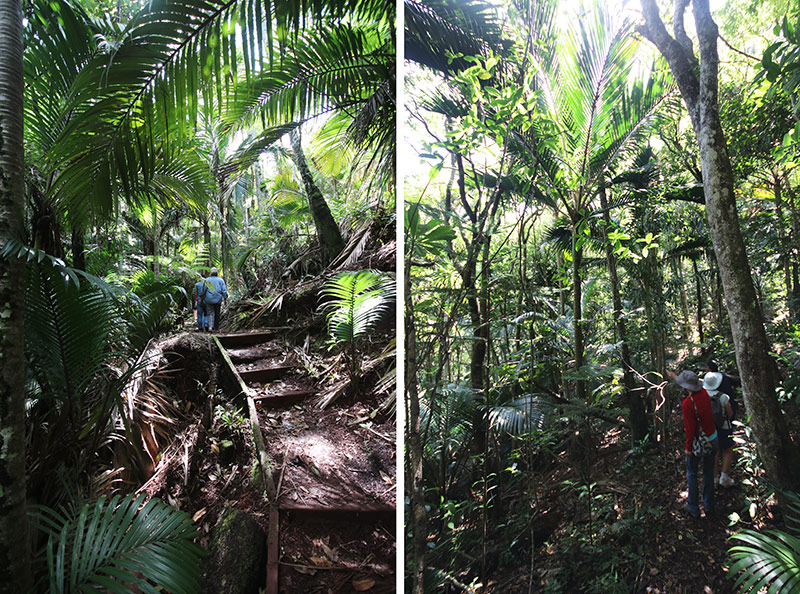 For Norfolk Islanders, there are only two places in the world to be – you’re either on-island, or off-island. As a mainlander visiting Norfolk, it’s not hard to relax and enjoy the rhythm of this island life on a small island in the middle of the Pacific, where you’ll be heading ‘Deffy’ (this way) and ‘Daffy‘ (that way) all over it. From rich history to natural beauty, unique birdlife, culture and the compact great outdoors, Norfolk Island packs a lot in. Make sure you listen up to the locals as they may be asking ‘Whataway’ (How are you?) or ‘Webout you gwen?’ (Where are you going?), and for sure then you’ll get a wave hello ‘morla’ (tomorrow). • 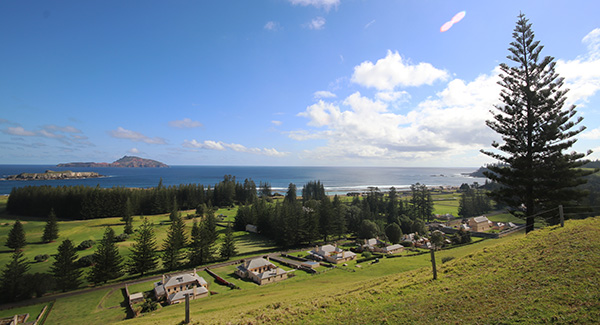