For a golf tragic, is there life beyond bogies, birdies, eagles and that unmentioned hole-in-ten? In Hua Hin – definitely, yes. Thailand’s premier golfing zone, 200 kilometres southwest of Bangkok on the “sunrise side” of the Gulf, lets golfers spend days, weeks even, joyously obsessed by tees, fairways and the 19th hole. But, there’s more.

Modern Hua Hin, you might say, was all but begat by golf. In the 1920s when the railway was pushed through to Malaya, and the Bangkok court and society “discovered” the area’s balmy beaches, Hua Hin’s most important structures were soon its new station, the Railway Hotel and Royal Hua Hin Golf Course, the first in Thailand. According to legend, when the 18-hole course opened, tigers sometimes roamed the fairways. You sent your caddy out to deal with the problem, hoping that when the tiger disappeared it wasn’t along with your caddy. 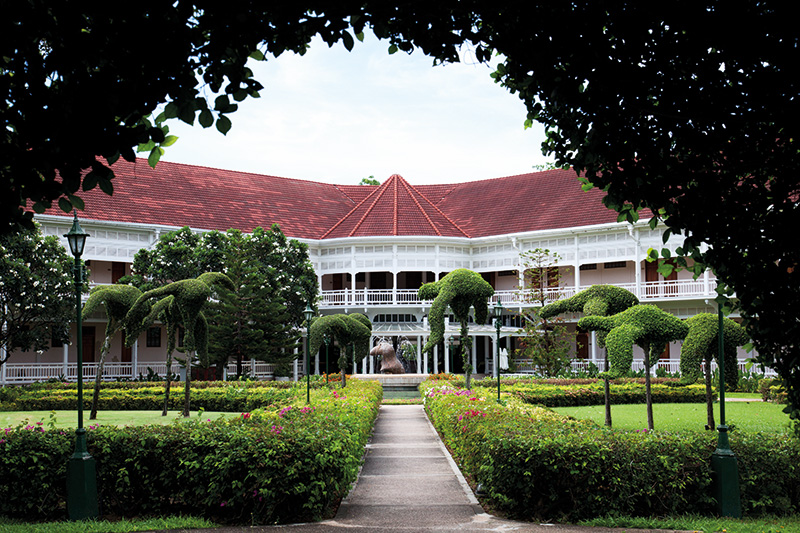 I’m not a golfer but I recently tripped over Hua Hin’s annual golf fest, the Centara World Masters Golf Championship. Enormous fun and impeccably coordinated, it is the largest event of its kind in Asia, with some 600-plus competitors, including a large Australian contingent. The mid-June tournament, organised by GolfAsian and Go Golfing, is open to all players over age 35 with an official handicap.

If four rounds of golf played over five days with 600 of your newest, golf-fanatical friends isn’t really your thing, then Hua Hin also offers plenty of chances to tee-off more privately. Tip: aim for a weekday game to best enjoy the courses as the weekend influx from Bangkok makes them much busier. Playing fees vary from course to course, peaking at top-drawer Black Mountain, where a round costs around $200, which includes your buggy and caddy.

When the sun sets over the fairways in Hua Hin, you don’t find yourself running a gauntlet of rowdy beer bars, vamping ladyboys and baby elephants. (Although some side-street exploring will reveal as much of the above as you might want, bar the baby elephant walker’s shtick.) This is a civilised town, which, because of its long association with the Thai royals, has been spared the excessive “success” of some of the kingdom’s other, more raucous playgrounds. 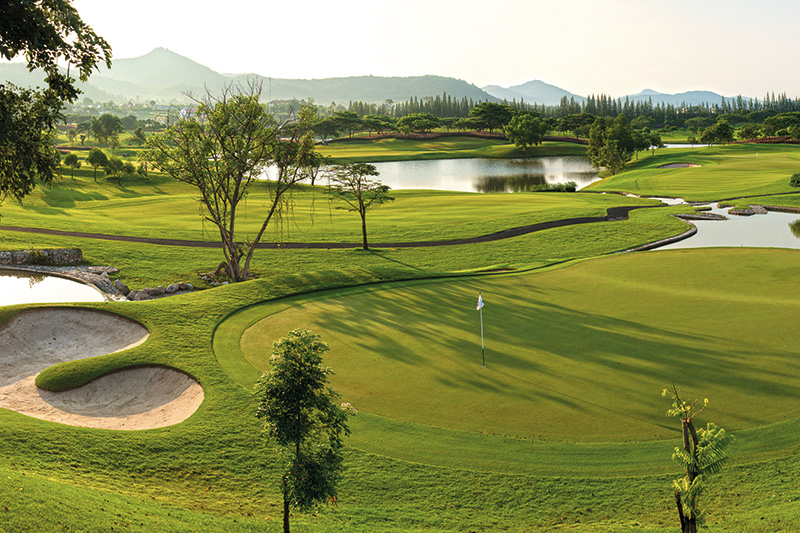 A quick history lesson diversion. Hua Hin (the pronunciation is closer to “Hwa Hin” than “Hoo-ah Hin”) means rock or stone head, because of the low outcrops that jut like “heads” along the shoreline. In 1910, Prince Chakrabongse, brother of King Rama VI, came upon this serene stretch coast in Prachuap Khiri Khan province while on a tiger hunt. Within a decade, the town was in vogue with Siamese society, boosted by the construction of the king’s vast Maruekhathaiyawan (aka Mrigadayavan) Palace. Built in 1923, this huge, now-restored structure – billed as “The Longest Golden Teak Palace in the World” – stands in a Thai Army reserve on the Cha-Am beachfront north of Hua Hin and is open to visitors. Rama VII, Thailand’s last absolute monarch, later built his own summer palace in town. Named Klai Kangwon – “Far From Worries” – it is open to the public only when royals are not in residence.

Meanwhile back at the nightlife, the most accessible, best-fun follies in town is the night market. It’s a pedestrian melee that erupts along a couple of closed-off streets –walk it, gawk it and shop for all the geegaws and T-shirts that we love bagging but don’t really need. Then pull up a stool at a noodle stall or a seafood eatery, open a cold Singha, Chang or Leo beer, and have a feast while the crowd flows by.

Just south of the centre of town, the purpose-built Cicada tourist market offers much of the above but with better seating, though minus the local colour. A more sophisticated market zone called SeenSpace has recently opened a little north of the centre. It sits on the beachfront and features a mixture of good restaurants, such as Hobs and the FIN seafood bar, plus fashion boutiques. The adjacent street market is crammed with the recurrent tat like Messi football shirts, beanies, toys and sunglasses. 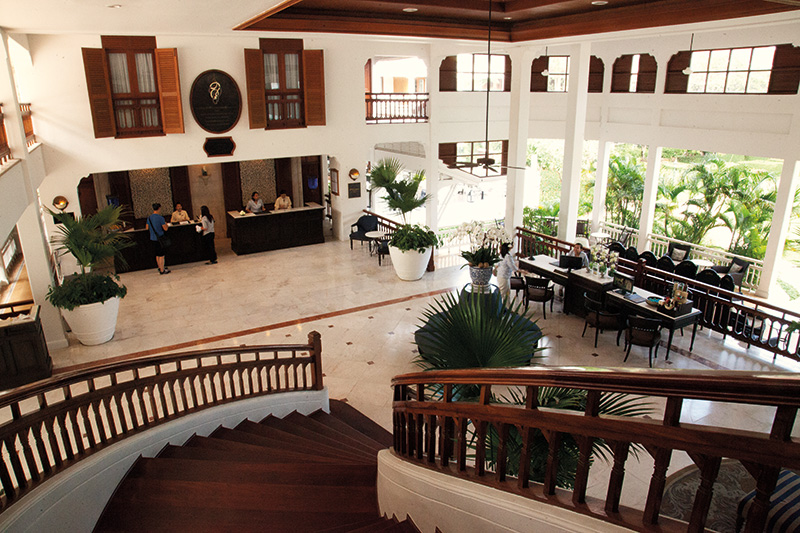 Hua Hin’s Gulf beaches are wide and clean, even if less stunning than the clear-water gems of Thailand’s Andaman shore. So far, they remain unravaged by massive tour group invasions and lethal, hooning watercraft. The view in front of the venerable Centara Grand Resort (the original Railway Hotel) and neighbouring Laksasubha Hotel, remains free of the ranks of umbrellas and beach chairs so prevalent on many popular Thai shores. However, if you like that sort of thing, just metres away the sands fronting the Hilton tower are carpeted with beach furniture and attendant hawkers. For me, the most laid-back beach here is just south of town at Khao Takiab (the name means Chopstick Hill, though it looks nothing like a chopstick) where a conical headland topped by a Chinese-style temple overlooks the long beach.

For golfers (and others) with kids in tow, the Black Mountain golf complex also features a large new water park with a 17-metre tower, plenty of slides, a wave pool and artificial beach. Meanwhile, Hua Hin’s other water park, Vana Nava Water Jungle, is home to the tallest man-made mountain-with-waterfall in Asia.

The blue ridges you see rising to the west of the city separate Thailand and Myanmar. Be sure to skip town for a few excursions in both Prachuap Khiri Khan and Phetchaburi provinces. Twenty-three kilometres south of Hua Hin you come to Khao Sam Roi Yot (“Mountain of Three Hundred Peaks”) National Park, a place of forests, waterfalls, deer and macaque monkeys. Its most popular spot is the grand Phraya Nakhon Cave, a serene, open-air cavern that is well worth the short jungle trek that brings you to it. 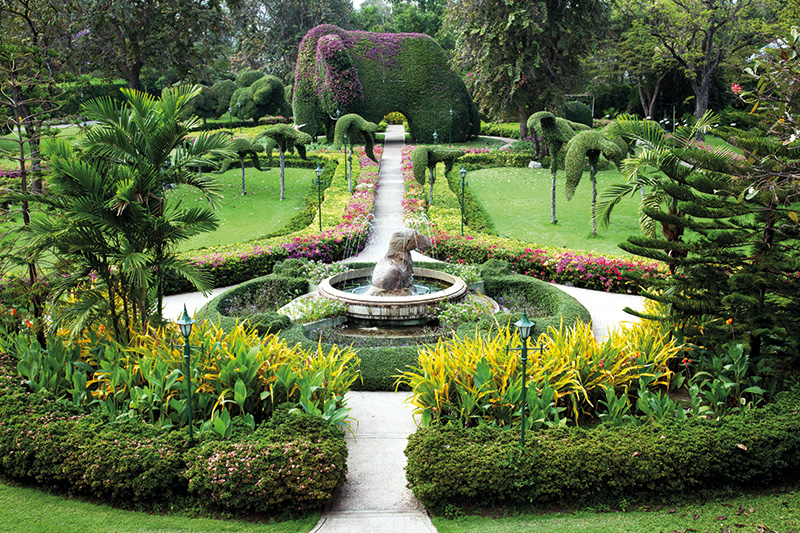 To the north of Hua Hin is Phetchaburi, a provincial capital that features, among other things, numerous Buddhist temples – it has been described as a “22-wat town”. Here you can ride an antique funicular railway up to a former royal retreat that’s perched on a hilltop, Phra Nakhon Khiri, a white, Italianate castle built for King Mongkut (Rama IV) in 1860.

The bottle of wine in front of you declares its vintage to be the year 2558. Which seems a bit premature for quaffing – if not plain implausible – but we’re talking Buddhist year 2558, which equals 2015 in the international calendar. To sample it, and much more, don’t miss a trip 30 kilometres inland to Hua Hin Hills Vineyard, the home of Monsoon Valley wines.

These “new latitude” wines are surprisingly good. You can whip through a quick tour of the vineyards and then get down to the real business of savouring the fruits of, well, someone else’s labour. Perched high on the vineyards’ Sala Bistro deck and tucking into a matched menu of delicious tapas and wines – such as colombard, viognier and a truly sparkling rosé – you soon achieve a long view of both the vines and life in general.

While the afternoon turns slowly into dusk, you realise you haven’t spared a thought for hours about all that arcane golfing stuff like aces and eagles, bunkers, woods, and worm burners – whatever the latter might be? • 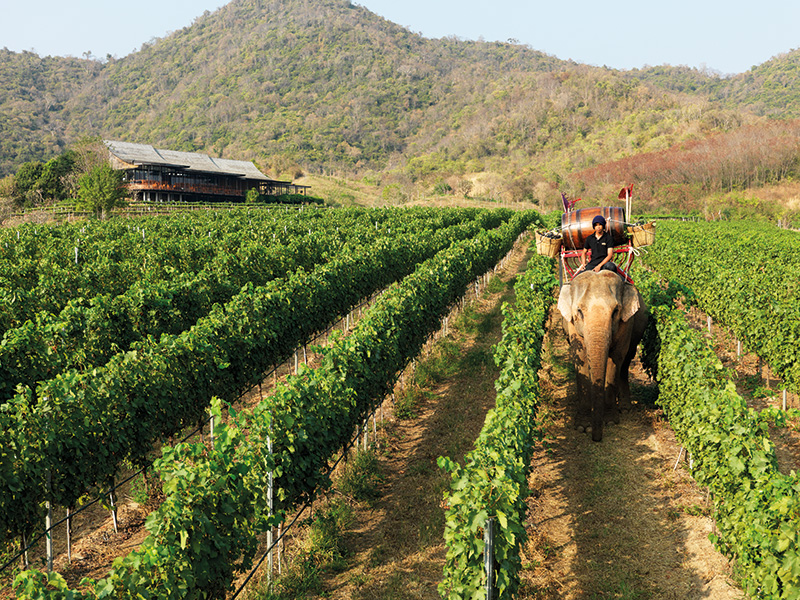 When to go
November to February is regarded as ‘winter’ (the term is relative), while March to June is the hottest period. July through October is wet season.