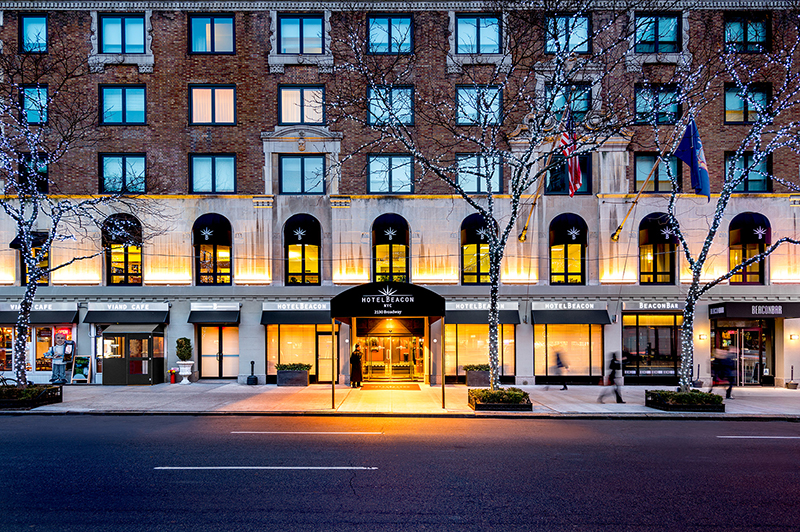 Robert, a concierge at the Hotel Beacon, greets me with a big smile. My check-in is four-hours late at 1am, but even that is not a worry to Robert. Called the ‘Jewel of the Upper West Side’, each of the 270 rooms and suites has a view. Look over Broadway and the Hudson River to the west, Central Park to the east, and the bright lights of Midtown to the south. Originally opened in 1928, the Hotel Beacon was named for its original airway beacon located on the roof of the hotel, and, at 24 stories high, it towered above all other buildings in the neighbourhood and rivalled the skyscrapers of Midtown Manhattan. The name is quite suited to the property as it draws people back again and again thanks to its welcoming home-away-from-home feel. Each room is spacious, comfortable, and most have cooking facilities. It also boasts a brilliant location.

It’s close to the subway linking you to many New York City icons such as the 9/11 Museum and memorial, and the Empire State Building.  It’s a mere three-block walk from Central Park, where you can see Strawberry Fields and remember John Lennon, the Alice in Wonderland statue and Shakespeare’s Cottage. As night falls, plan to kick on to a show on Broadway, allow some time for a stroll along the Hudson River or one of the many boulevards with trillion-dollar addresses, or turn south of the hotel and allow the bright lights of Midtown Manhattan to beckon. No matter what you do in the Big Apple, the Hotel Beacon will be waiting, with the smile on Robert’s face worth bottling.

For more information and to book visit, beaconhotel.com