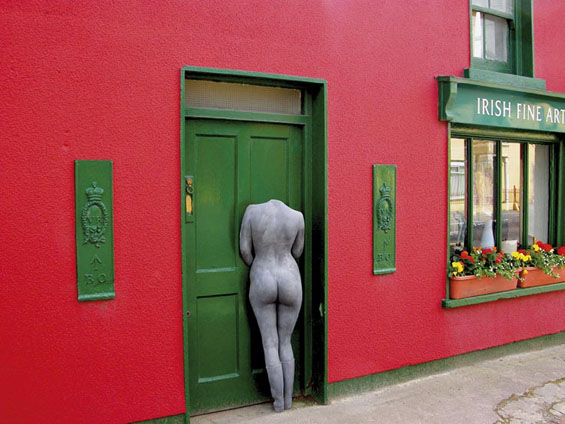 An amused John Borthwick drives around an Ireland of drinkers, musicians and wisecracking characters for a holiday with a smile.

“Are you travelling in a papal carrier?” asks the shopkeeper at Portrush on Ireland’s Antrim Coast. I look puzzled. He repeats, with the precise articulation one reserves for the hard of hearing or the dim of wit: “Are-you-in-a peo-ple carr-ier?”

“No, nothing holy: we’re in just an ordinary car,” I answer. Too late –  the name sticks. From then on, our rental ride, a humble, diesel-engined Opel sedan, is anointed “The Papal Carrier”. 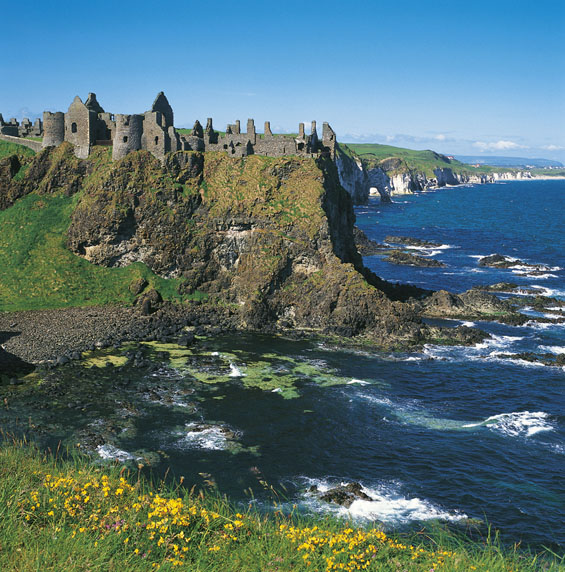 The stretch of Northern Ireland coast that runs down to Belfast is loud with the history of scholar monks, feudal lords, saints and shipwrecks. Alternately wind-whipped and breeze-caressed, Antrim can rain, shine or produce whisky with equal whim. Bushmills, the oldest licensed distillery in the world, has been here since 1608, when King James I allowed one Sir Thomas Phillips to produce uisce beatha, “the water of life”. This being Ireland, the claim is keenly disputed by other stills but, when Irish lies are smiling, you never let a fact get in the way of a free drink. Accordingly, I join the tour of Old Bushmills Distillery.

After centuries of bottling “the mist”, Bushmills know exactly what visitors want. Whipping us past mash tuns, condensers and gleaming stills, the tour guide points us straight towards the tasting room. A dozen different liquors are offered by the mini-shot for us to compare and consume. “I’m a teetotaller, meself,” declares the middle-aged woman opposite me. Working her way deftly through the range from single and blended malt Irish whiskies to Scotch and Bourbon, she declares, “Ten-year-old Irish single malt’s still my favourite! Another wee one, thanks.”

The Antrim Coast itself is almost drunk with history. Over there is a banshee-wracked, 16th-century cliff-top ruin, Castle Dunluce: struck by lightning during a feast, its kitchen, cooks and food all toppled into the sea. Farther on is Tor Head, from whence, in 1901, Guglielmo Marconi made his first radio transmissions. The misty headland across the water is Scotland’s Mull of Kintyre and you can almost hear Paul McCartney counting the royalties. And back a little way is Inishowen Peninsula, the northernmost point of Ireland which, in defiance of cartography and common-sense, is not in Northern Ireland at all but in “the South”, otherwise known as the Republic of Ireland. 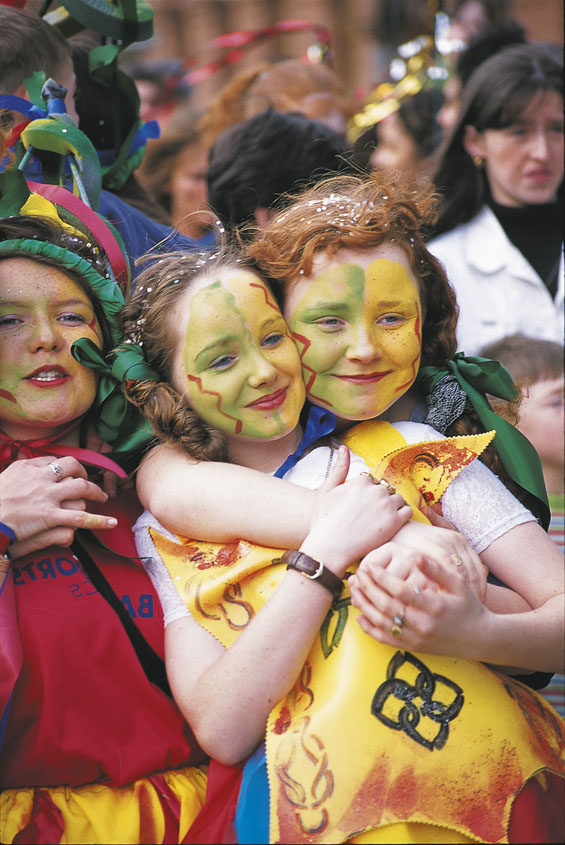 Next morning, we point the Papal Carrier east along the coast towards the Giant’s Causeway, Ireland’s most famous tourist attraction. Its 40,000 hexagonal basalt columns jutting from the sea inspire visitors to deploy themselves among its every nook and cranny, there to be endlessly photographed.

The main man associated with these World-Heritage organ pipes is a legendary warrior-giant called Finn McCool, and it’s on Finn’s so-called “Wishing Seat” that many visitors pose for photos and make wishes for their hearts’ desires. None, I suspect, request physiques resembling Finn’s. His backside, ’tis said, was “wide enough to halt the march of warriors through a mountain pass and … each of this thighs was as thick as a horse’s belly”.

Holy-rolling south-east, we overnight at the Londonderry Arms in Carnlough, a rambling old structure encrusted with gables and ivy. We arrive on music night – but, in Ireland, what night isn’t? Guests and their pints gather in the lounge where two local musicians, Nora Glanville and Robert Farrent, are holding court. She, aged 60 and with the pure voice of a 20-year old, and he, somewhat older but still with the repertoire of a lifetime spent tickling the ivories, take the music down a nostalgic path with The Mountains of Mourne, Londonderry Air and Rose of Tralee. 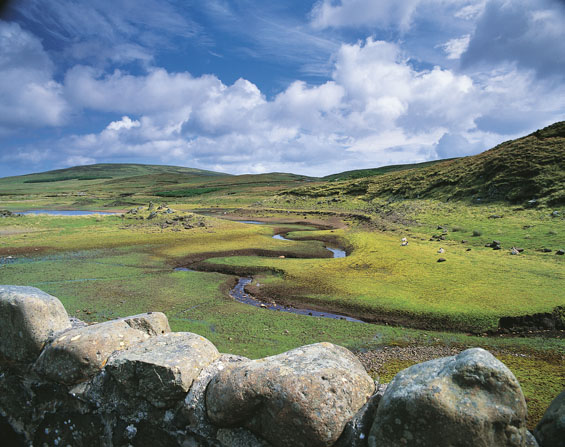 A Baileys’ musical for nostalgia tourists from Boston? No, this is the Irish at home with their own songs, music that embodies the home-grown saying, “our wars are glad and our songs are sad”. Sentiments, not sentimentality, drawn from the stones and from longing, wash over us as the drinks pass around.

Later, I duck around the corner to the Waterfall Pub for a nightcap of something a little more contemporary, abrasive; jukebox Pogues and the like. “What time do you shut?” I ask the barman. “Oh, about New Year,” he bellows.

We reach Belfast and its famous, ornate watering holes, such as Flannigans Bar and Morrisons Spirit Grocers, both national heritage treasures. One look and two pints in any of them and you’ll never again bother patronising the alleged “Irish Pub” with a faux-Paddy name like Filthy McGilthy’s that just opened on your local tourist strip.

As well as being a city of pubs, Belfast remains a city of churches – though our local guide, Ken, assures us that “nowhere is so much Christianity preached and so little practised”. But that’s Belfast, if not all of Ireland: a paradox of faith and fatalism wrapped in a quip.

We drive past an exclusive boy’s school. “The famous writer Samuel Beckett taught there until he was sacked,” says Ken. “The headmaster told him not to mark the exam papers so harshly because, after all, these were ‘the cream of Belfast youth’, to which Beckett answered, ‘Yes: rich, thick and full of clots!’.” 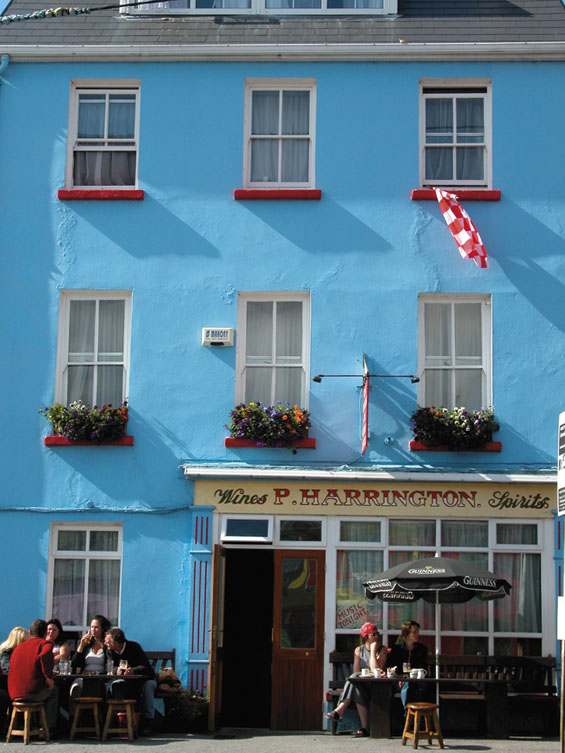 The Irish make jokes about everything, including themselves. “We could rule the world if only we were good-looking,” deadpans a Dublin newspaper columnist. They joke about religion and, naturally, about their climate: “We applied for membership of the Third World but were turned down because of our weather.” At times, they even become the joke – when my travelling companion asked at a post office the cost of sending a postcard to Australia, the response was pure postal logic: “That depends on how many stamps you put on it.”

Above all, the Irish love joking about Americans. Consider historic Castle Leslie, at Glaslough in County Monaghan, where we slept in fusty, aristocratic splendour. “We know when tourist season has started,” says manager Samantha Leslie. “Around May, there’ll be a buzz on the front-door intercom and some American male will say, ‘Hi! I think we’re related. My wife’s Christian name is Lesley’.”

The Papal Carrier rambles on. We are now well inside the Irish Republic but suddenly, the Irish joke is on us. As antipodeans unused to diesel cars, we blithely fill our holy roaming chariot with petrol. The pontifical wheels soon fall off our procession. When I call the rental bloke in Portrush to inform him that our Peoples’ Pope-mobile won’t go any farther, he explodes with impressive spleen. Quite understandable, but still we dub him Finn McUncool.

“We Irish get on with everyone except ourselves,” the tin-whistle player declares. He’s resting between songs at Matt Molloy’s pub in the coastal village of Westport, County Mayo. It is late and the sign on the front door had said “Closed”. The darkened pub seems to be drawing breath after a long day of Guinness and blarney.

“Don’t worry: things aren’t what they seem,” says a savvy Dublin girl I’ve fallen in with. She leads me down a side lane and raps on the pub’s back door. A wary voice calls, “Who is it?” She declares the unembellished truth: “It’s me.” The magic words: the door springs open and we enter a cavernous room booming with laughter and the sounds of fiddle, whistle and uileann pipes.

It turns out Mr Molloy, our esteemed publican, plays flute with that famous Irish group, The Chieftains. Some 50 people, much befogged by smoke and ale, are enjoying “a wee after-hours riot” in his pub.

In County Sligo, known as “the land of heart’s desire”, cash registers trill to the memory of William Butler Yeats, much as Dublin’s do for James Joyce. At Drumcliffe, in the graveyard by St Columba’s chapel, scores of visitors come to see the spot where the poet and his wife, Georgina, are buried. Our guide coyly overlooks their age discrepancy. It seems that Yeats married a woman 27 years his junior. “Not a woman, really,” opines a Dublin matron beside me, “Just a wee lass of 15. And on the same day he proposed to her, he’d also proposed to her mother. Tsk.”

The songlines of Ireland’s poets start in the megalithic mists at Carrowmore, near Sligo, where we walk among 6000-year-old stone tombs – the oldest built structures in Europe – and they resonate all the way to music night at any local pub. Someone takes up a fiddle; someone else, a bodhran drum. The singer might have to bellow above the crowd noise, “We want to play, would you shut the hell up? Please.” And they do. A hymn of resistance or exile or love confounded weaves through the clatter and laughter, until it all falls silent and you find it’s not the smoke but the Ireland that’s stinging your eyes.

Self-driving in Ireland ought to be easy. The Republic boasts bilingual road-signs – which allow us to get lost in Irish and English. Not to worry. Place names such as Tubber-curry, Ballymoney, Ballygally, Folly Lane and Colooney seem to have been concocted expressly to keep visitors laughing while they’re lost.
Needless to say, we laugh a lot. •