Grab a beer – craft of course – and settle in to read all about the hot spots of hipster New York. 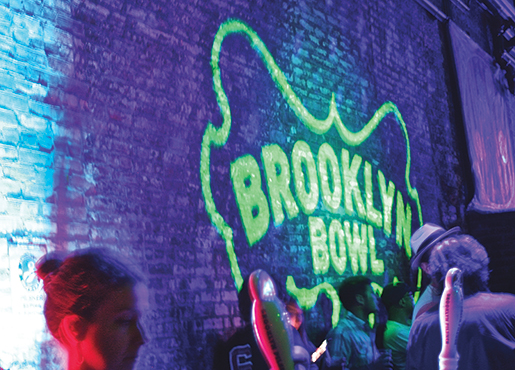 New York City: the mouth that drank up the Old World’s brimming desires. Where numberless dreams have been answered and at once romantically lost when their dreamers fashion their realities. We’ll travel from west to east within the Village zone to find an exotic kind of social complexity baked in the urgency to create and forge new fantasies. There are many ways to go but only one right way, your way.

So bring all your desires, all your fears, joys and discontents. Across these streets, where jazz nocturnally blazes trails both forgotten and ‘found’, across the bending lanes of Bob Dylan’s Jones Street and Carrie Bradshaw’s Perry Street stoop – paradoxes abound in one of the most tenacious of places. Head from the West Village to the East Village and the Lower East Side (LES), hopping the L Train or trekking the bridge into Williamsburg, Brooklyn, where hip culture is defined and works savagely towards urban transformations.

The primordial question; what is “hipster”?
Hipster-like substances forcefully go against the mainstream until they become mainstream and thereby find new expressions. Back in the 1940s, African-American communities used the term hip to describe youths who smoked ganja, occupied the jazz scenes, and loosened the knots around their waists. Harry ‘The Hipster’ Gibson, a white pianist from Harlem with all black bandmates, takes most of the credit for coining the word.

The hipster modality hasn’t changed much since vintage times. Contemporary hipsters are similar to the hippies of the Sexual Revolution because they still represent things made in small batches and intended for esoteric audiences. You might see them in gold leggings or red jeans, knotted wristbands, mirrored sunglasses and Shell Toe Adidas, wishing they were Hunter S. Thompson or some character in a Quentin Tarantino movie. You might catch them making gourmet pickles, drinking green juice until they splurge on beer and burgers, or playing pinball at their favorite dive.

Broadly speaking, hipsters occupy today’s preferred stereotype: a digital-bohemian paradox of urban developments sourced in the stylistic intercourse of funk and hip-hop with video game culture and indie diagrammatics. Underneath it all, hipsterism completes the contentious desire to transgress status quo and become handmade. 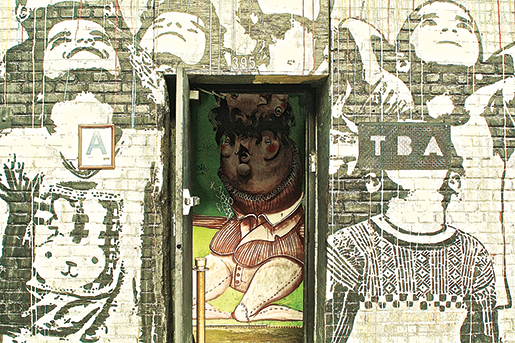 Have Yourself a Little Jazz, Westside
Houston Street (pronounced hows-ton) straddles the zone, running through the West Village, SoHo (South of Houston), NoHo (North of Houston), the Lower East Side, and the East Village; add Chinatown and Little Italy a few blocks southwards. You can cover Houston knowing that there are unique eateries, like Snack and Westville; offbeat theatres, like IFC and the Angelika; and other recherché persuasions on both sides.

Despite myriad influence and continuous gentrifications, the West side still retains many original faces, plus the world’s most authentic jazz platform. In the West Village, you can fire and cool your mind on the veracious melodies of players all through the night.

Jazz is as diverse and pervasive as a continent. So before or after heading east, check the Blue Note’s and Village Vanguard’s schedules. This is jazz master’s territory – where Maceo Parker, John McLaughlin, Chick Corea, Christian McBride and others frequent, altering your musical DNA and reinventing your euphonic palate. For more casual yet equally authentic vibes, try the Zinc Bar, the 55 Bar to catch Mike or Leni Stern, or wait in line across the street to enjoy a set or two at cavernous Smalls.

All these venues charge a cover from $US10, but nearby Fat Cat, the roguish brother venue of Smalls, covers for $US3. It’s a big frenetic basement space for both young and gray (but mostly young), filled with billiard, Ping-Pong, shuffleboard, chess and foosball tables; with old couches that slump snugly against the bands next to the bar, which serves nuts and local craft brews – a maniacally upward movement in NYC and The States in general. Try Brooklyn’s Sixpoint and California’s Stone ales, amongst others; they’re relatively cheap (around $US7 a fill), aromatically seductive, always frothy on tap, and – grab your bankcard before you jet – wily-strong.

The East Village and LES
The East Village and Lower East Side feel permanently broken-in and exclusive like an after-party. There’s a cagey venue with the tiniest sign that reads “The Stone” on the corner of Avenue C and 2nd Street that artistically typifies the East Village. It’s a not-for-profit audio-experimental space that books on a curatorial basis. Admission is $US15 per set and you can hear cutting-edge virtuoso harmonics by Medeski, Martin and Wood’s side projects when they’re in town. All ages are welcome, but there are no refreshments, “only music.” Gather beer from the kiosk across the street if you enjoy superfluous stimulation: the melodies can be quite heady. Other essential music venues include Mercury Lounge, Bowery Ballroom, 151, Arlene’s Grocery, and lastly, the Pink Pony, for a café-styled evening. 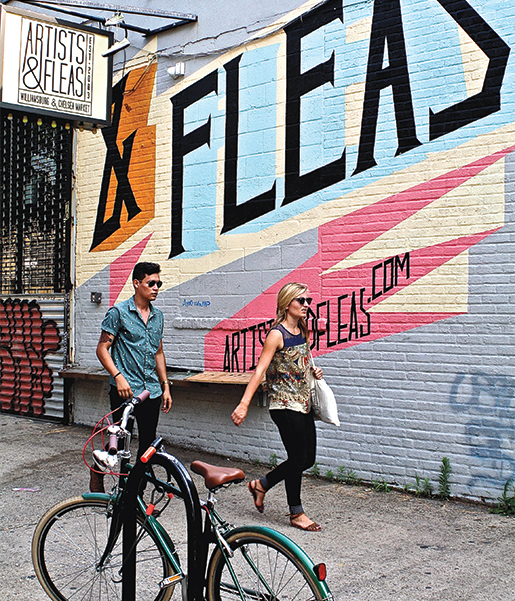 Close to The Stone at 54 East 1st Street, you’ll find lovely little Prune on a quiet block to see what the old gastronomic favourite is (old by NYC standards). Chef Gabrielle Hamilton has new additions. Favour a Mariner at brunch – one of eleven Bloody Marys – made with homemade lemon vodka, clam juice and olives. There are creative and classic dishes, like grilled pigeon with warmed parsley sauce and seeded toast, or grilled handmade lamb sausages and Malpeque oysters served with peasant bread. But the fried sweetbreads topped with bacon and capers are dear to the clientele.

Williamsburg+
Taking the Williamsburg Bridge eastward is like riding a hipster hoverboard; maybe because hipsters always seem like they’re travelling ‘back to the future’. Nevertheless, find yourself some old-time bonhomie and you got all the aesthetic perks that go with the nifty vibes. You can be sure that upon entering, say, the Music Hall of Williamsburg (MHWB) or the Brooklyn Bowl for a great band – you’re guaranteed to hear some of the best live music in the world. Schedules are extensive and continuously updated.

For ticketed shows, buy in advance to avoid waiting in line, wondering if you’ll get in next to the smokers already on their second drink. (There’s always the iconic view of the Manhattan skyline along the East River.) Recent acts to have played at the MHWB include Oh Land, Hurray for the Riff Raff and Conor Oberst. If you dig a more motley lunar experience, head to the Brooklyn Bowl. Rolling Stone magazine once said, “It blows our minds…it’s one of the most incredible places on Earth.” When it opened, I forgot about travelling for a while. There are 16 lanes with fine leather couches that run alongside the stage, a glorified diner at the back with some of the best fried chicken in the five boroughs and a great smaller-venue schedule (the Bowl holds 600). With a local beer list mostly stocked by Brooklyn Brewery (which lies literally right around the bend), a dark and diverting atmosphere and acts like Toots and the Maytals, Soul Live, Karl Denson’s Tiny Universe, and DJs like Questlove and Q-Tip, even if you don’t know who’s playing – if you like brazen music and sonically unified crowds, you’ll have an unearthly good time. It’s been open since 2009, but it’s scant wonder London and Las Vegas now have Bowls of their own.

Williamsburg itself is the hipster capital of the universe.

The neighbourhood is perhaps best enjoyed during weekday nights or sunny Sundays. Bedford Avenue, the main drag, is thronged with funky cafés, bars, and restaurants; and there are park events and flea markets on adjacent streets sporting BK’s overhauling urban art scene. You’ll also find it easier to grab a table at some of the more popular restaurants in town.

For famous Brooklyn-style pizza head to Motorino on Broadway or Roberta’s further afield. For upscale, try Traif or Xixa and for casual go for Pies ‘n’ Thighs and Samurai Mama. All these spots are well-loved and serve ambrosial dishes at prices that should afford you. 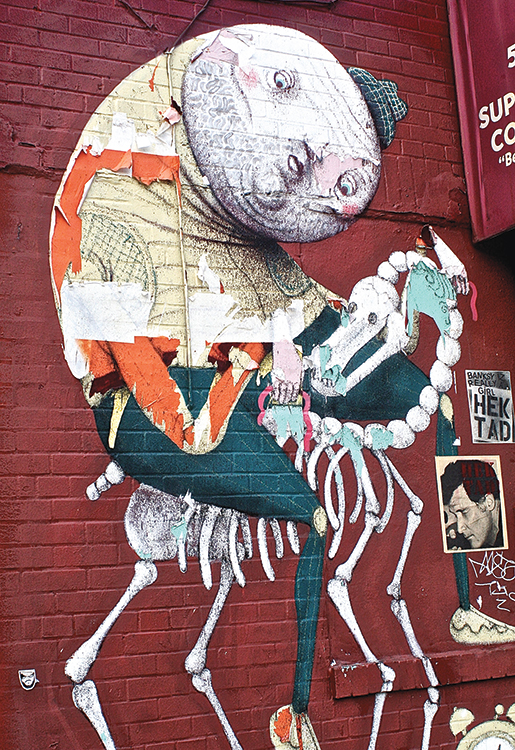 When the streets of Williamsburg swell, there’s more leeway a few blocks north in Greenpoint. Find Dirck the Norseman (named after the first settler in Greenpoint; a Scandinavian ship builder with a killer name), a new breezy brewpub worth a stop (especially since Brooklyn Brewery only does group tours these days). Dirck crafts and carries some excellent brews. Brooklyn Magazine ranks their Tupelo Double IPA on its recent top ten list, detailing, “it pours a vibrant orange, with a nice balance between its soft melon and floral aroma, smooth piney bitterness and sweet, earthy finish…truly an angel in the first degree.” You can also get Other Half, Grimm Artisanal, Peekskill, Finback, and Singlecut brews around town. They’re some of the best crafts you’ll find east of The Lord Nelson Brewery at The Rocks in Sydney and west of Belgium.

There’s a craft brew revolution here, if you haven’t heard, which apparently stalks alongside sappy politics, and, the better the brew the wetter the gut. But whether you’re having a beer or not: always keep your dreams warm and your mind, doggedly cool. •

The Wythe Hotel in Williamsburg is an aesthetically pleasing place to jump off to many restaurants and venues in West Brooklyn; with skyline views. wythehotel.com

When to Go
New York should be experienced at all times of year, but you might skip the winter and save yourself luggage space and gain some more sunlight.