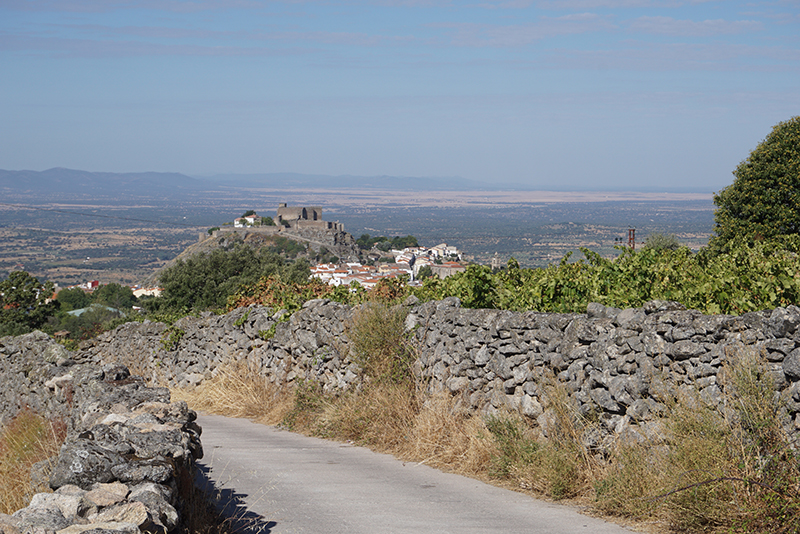 Ok, OK, I love you Italy and it’s been a fine romance but I’m breaking up with you. I haven’t done this lightly, it’s just that I have met Spain and spent some time there . . . and I’m in love.

Apart from short periods of time in my misspent youth, Spain was just a passing flirtation. Someone I had a few drinks with. But recently as a grown-up I discovered a few choice locations in Spain and fell head over heels.

As we couldn’t cover everywhere, we stopped short of a whistle stop trip and picked the eyes out of culture, gastronomy and a little history and some time for reflecting on the cult of gluttony. Gluttony was my failing in Spain – but hey! The country has no mercy and takes no prisoners – just eat!

Arriving in Madrid on a pleasant end of a summer day, we drove along tree-lined streets and were delivered to Villa Magna in the elegant Salamanca barrio (precinct). This is the time when jet-lag kicks in but it’s too exciting being in a new city and it’s afternoon – lunch time, yay.

And this is how the eating frenzy began. First stop was a five minute walk from the hotel to the beautifully restored and beloved Platea Madrid. The old art deco theatre has had new life breathed into it and has become a fragrant complex of tapas bars, Michelin starred restaurants and snack bars with rustic market-style décor. A cooling ale and a plate of potatas bravas (fried chunks of potato with spicy, paprika ridden tomato sauce) and small bites of battered cod – I was hooked. 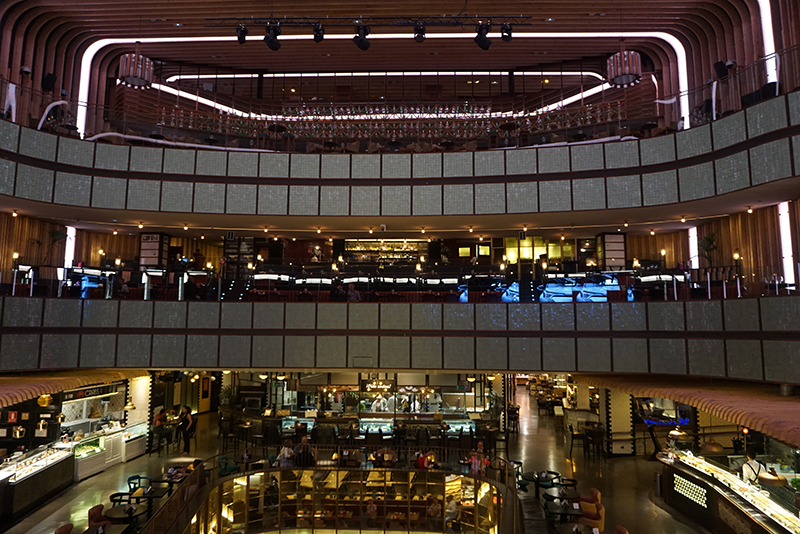 An early dinner eschewed. This was the funny part of the trip – our timing was not always conducive to being ‘hungry’. Breakfast isn’t a big deal here. Coffee and a little pastry maybe or two coffees. Lunch is from anywhere between 2pm and 4pm and if you are on a schedule, you’ll find yourself having dinner within a couple of hours after a banquet of a lunch.

So after a quick change in my room and a serious count of the threads in the cotton sheets, we were off to  nearby Tatal, a fancy restaurant owned by Rafael Nadal and Julios Ingelsias (both of then stood us up for a shared plate). The restaurant started filling up and by the time we left at 10pm (early by local standards) the place was packed with well-dressed patrons – and a week night too.
It was short, it was sweet, but after Madrid there were windmills to tilt at further afield.

Extremadura
We are driving out of town and heading just north of Andalusia, south of Castile and east of Portugal into an untouched and unspoilt region of Spain called Extremadura, an autonomous community. Let that beautiful name roll off your tongue: Ex-trem-a-dura! (Some say it translates to the region’s physical character – hard and strong.)

As we take the three hour drive to discover the gastronomy of the region and to explore three immaculate medieval towns that contain outstanding Roman ruins, World Heritage sites and some celebrity Iberian pigs – I practice a slight lisp to perfect the “gracias” into “grathias” to inflict on my new amigos.

We pass great swathes of dry fields (one more month before the rains come to the plains); small villages and abandoned factories with ‘hard and strong’ graffiti on their walls are scattered along the highway. 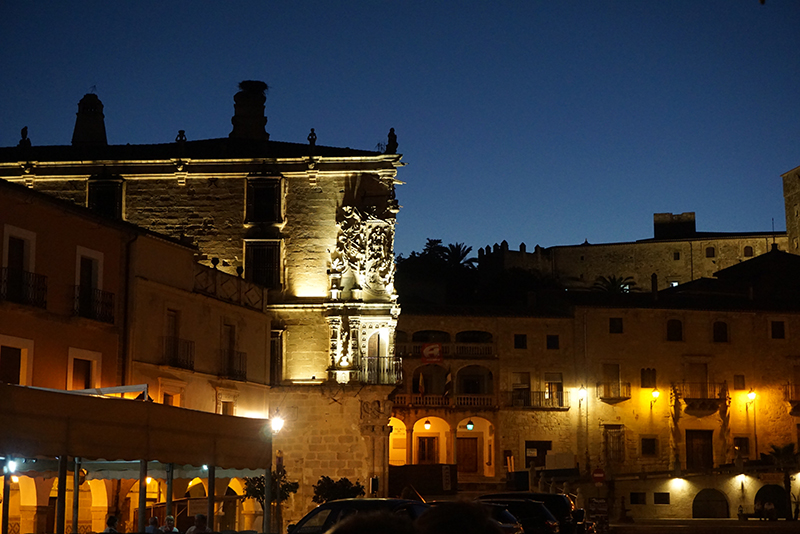 We arrive at Trujillo with its cheery tree-lined streets and we begin a meandering drive up sleepy narrow lanes to a vast open square – shutters up and ‘siesta’ is whispered. This is the old town, a walled, hilltop community overlooking old, old countryside. The town is connected to the Americas because of the discovery of the new world by Columbus in 1492. The first immigrants to South America came from this town. The soldiers were known as the Conquistadors and throughout the 15th and 16th century, brought the new lands to heel by brute force.

The most famous conquistadors were Hernán Cortes (1485-1547) who conquered the Aztec Empire, Francisco Pizarro (1471-1541) who conquered the Inca Empire and founded Lima, Diego Paredes (1466-1534) who founded Trujillo in Venezuela and Francisco de Orellana (1464-1536) who discovered the Amazon. All these ‘hard and strong’ men were born in Extremadura.
On their return from the Americas to Trujillo, the Conquistadors built magnificent residences to celebrate the colonisation of South America and their purloined wealth. The legacy of the conquest can be seen in much of Trujillo’s perfectly preserved architecture and the impressive bronze statue of Francisco Pizzaro (1471-1541) mounted on his horse, dominating the town square.

Before arriving at Trujillo we visited a stunning winery surrounded by the vineyards that went on forever. An enormous sign blazoned from the middle of sun-soaked fields reading HABLA.
The light is different here and as the sun tilted from noon position the tapestry of grape vines was bathed in a golden glow. The winery was started about 16 years ago and by the smile on my compadres faces – the pale, elegant Rose was a hit!

After a long lunch that almost overlapped dinner in Trujillo, a gentle, digestive stroll around the square then to bed to dream of more jamon!

Caceres
On to a cheese factory next day that was a fulfilling experience. We are heading to the World Heritage city, Caceres, stopping at Casar de Caceres to watch the process of making a local legendary cheese called Torta del Casar. Because of import laws in Australia we can’t get raw milk cheese to eat! So here we were ready to see how this slice of heaven is made and by whom.
Only two brands of this cheese is made in Spain. Happy sheep send their milk here and the 72 hour process of turning milk into a raw milk, unpasturised cheese begins – and it’s all down to step-by-step tradition, a clean and perfectly timed process and all at the hand of the master (mistress) cheesemaker – Narcisia Municio. Narcisia is a rarity in the business and one of a handful of female cheesemakers. And what cheese she makes.

We tried the end product and if a little tear of pleasure was spilt – I’m not ashamed. 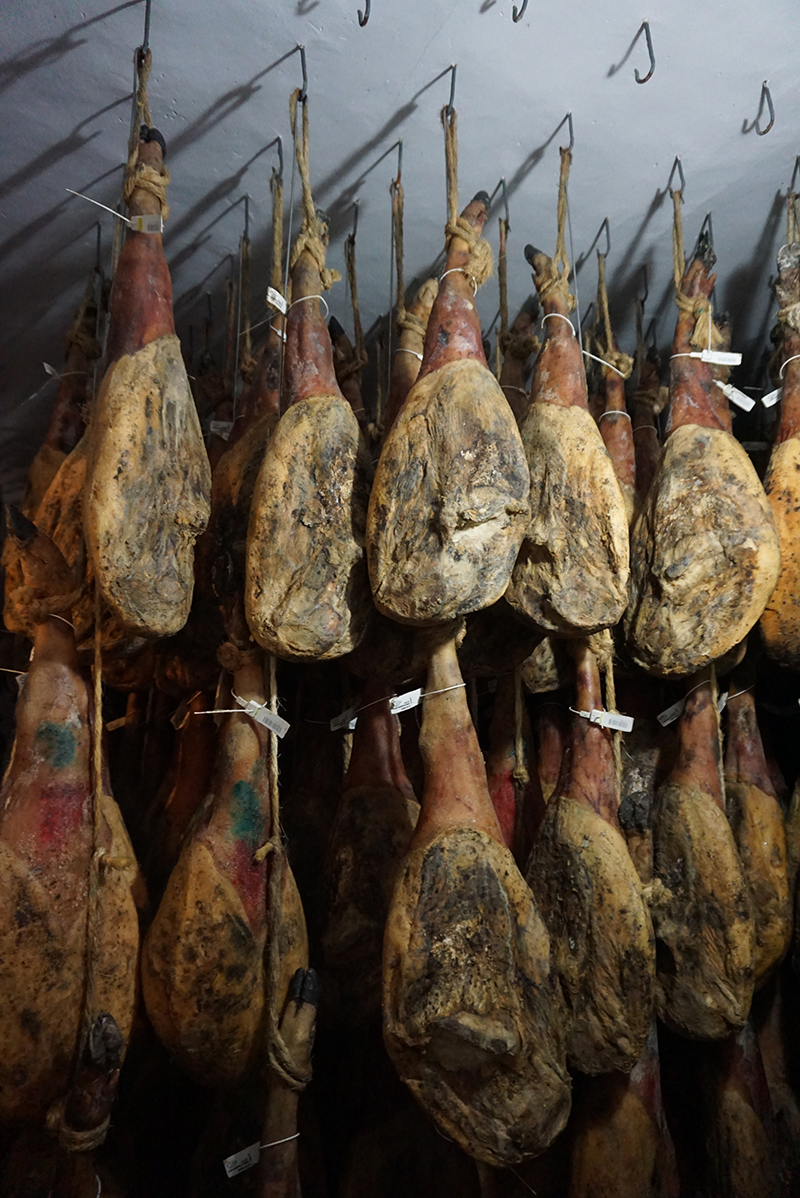 Jamon Iberica in the process of becoming more fabulous

Caceres has been named Spain’s Gastronomic Capital and as a special treat we are to have lunch at a two-star Michelin restaurant, Atrio.
This complete, ancient city from the Middle Ages oozes solid confidence – and so it should as it has embraced, been attacked, colonised and endured with tenacity a blended mix of Roman, Islamic, Northern Gothic and Italian Renaissance civilisations throughout history. And here stand the buildings to prove it. About 30 towers still remain from the Muslim period in Caceres. And as we step over cobble stones and steps that have been polished by thousands of feet, we walk in to Atrio Restaurant Hotel in the Plaza de San Mateo.

A tour of the hotel with its cutting edge flair; the building following a canonical design in harmony with its surroundings we visit rooms with a simple ambience of neutrals and natural light. The terrace offers views of distant mountains and the neighbourliness of historic Caceres.

Before we were actually served our endless degustation we met with chef Tono (Juan Antonio Perez) a charming, modest man with an impish grin and a sparkling personality. He and his partner Jose Polo are behind this splendid, felicitous complex where we were about to encounter the essence of Cacares.

Our lunch followed a perfect pattern of delightful, imaginative dishes served with a light flourish. From a delicate bisque, to silvery slivers of tuna cappaccio and on and on and on until dessert, a dash of foam, fruit crème and a fine stick of chocolate. What a privilege for my eyes and stomach to be so gastronomically rewarded – for what I know not, but I’ll happily accept the prize.

Montanchez
After a late and lazy breakfast – coffee – no food – we depart Caceres to dive into our next culinary caper. At Montanchez to ‘dehesa’, the managed oak forest landscape that is home to the region’s Iberian pigs. These are royalty of the porcine world. The Iberian pig has been part of the Extremadura world since ancient times. The Romans were expert livestock farmers as well as producing salt-preserved hams. This breed of pig has been maintained and is a genetic treasure, an animal perfectly adapted to the ecosystem of the meadow, which performs the miracle, and thanks to its unique metabolism, of changing pasture it eats into one of the healthiest and most exquisite natural products you can enjoy: acorn-fed ham.

It was mine, and my companions’ mission to eat a little jamon iberico at every meal we ate in Spain. Mission accomplished? Well, the last day I piked, enough of this treasure was enough! 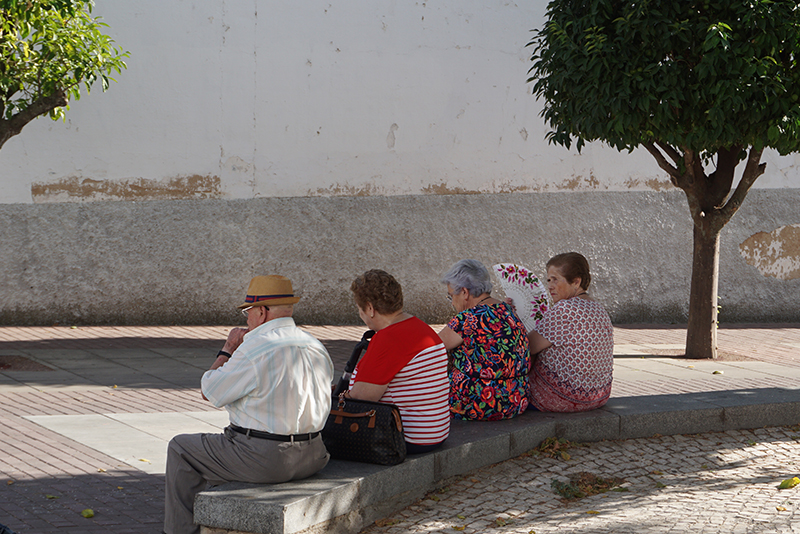 Sitting in the midday sun in Merida

Last town to visit in Extremadura is the capital of the area – Merida, founded in 25B.C. – another World Heritage site.
Perambulate around the town late afternoon and gasp at what unfolds – some of the finest Roman ruins in all of Spain stand here. The beautiful Roman theatre is used for open-air theatre, and the amphitheatre, Temple of Diana or the Roman bridge are sights to behold.
Back to the hotel – a Parador (a parador, in Spain and other Spanish-speaking countries, is a kind of luxury hotel, usually located in a converted historic building such as a monastery or castle. Often owned and run by the government tourism bodies) Parar means to stop, halt or stay.
My Parador de Merida had been a vast convent and my room was austerely furnished with not too many distractions – and later that night I promised to lie quietly and confess my sins of gluttony.
But until then, gee, is that the time? 11pm – must be dinner time. Last meal in the region, so we’ll go hard, we’ll go strong. Ole! •

Getting there
Emirates from Sydney to Dubai and on to Madrid: emirates.com 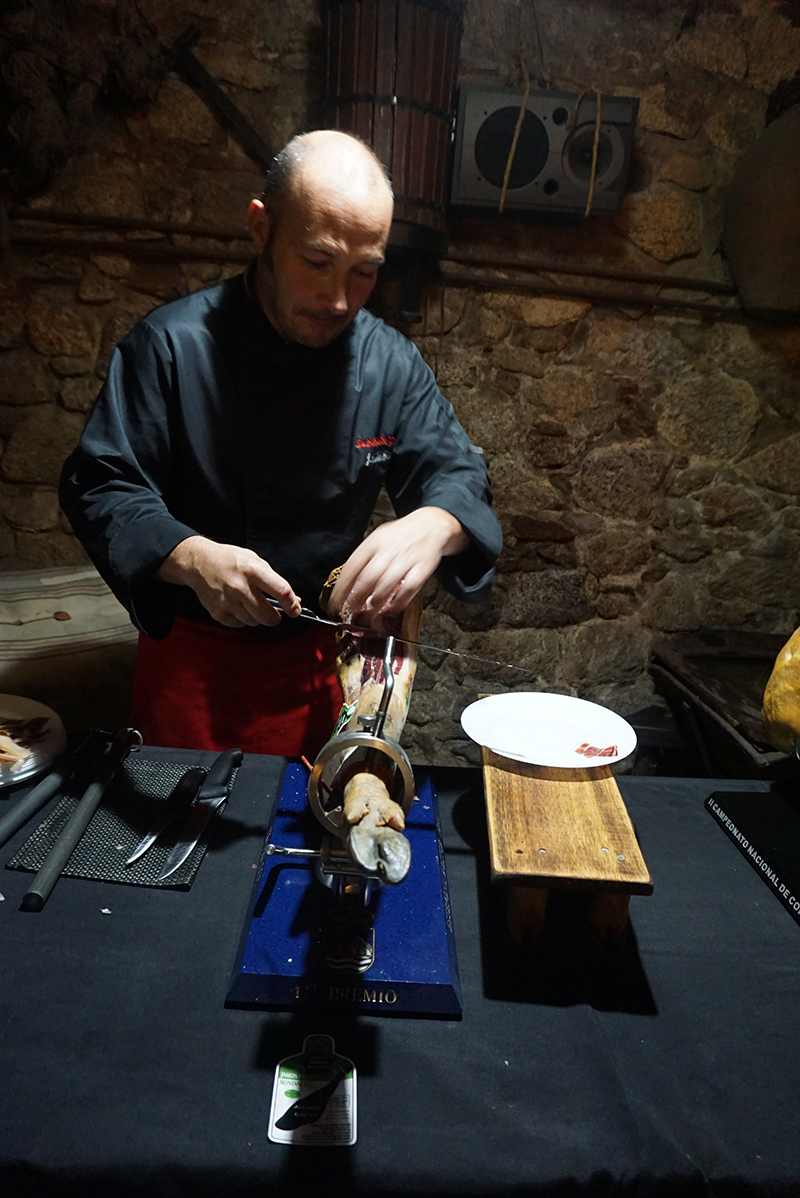 This is how you slice jamon