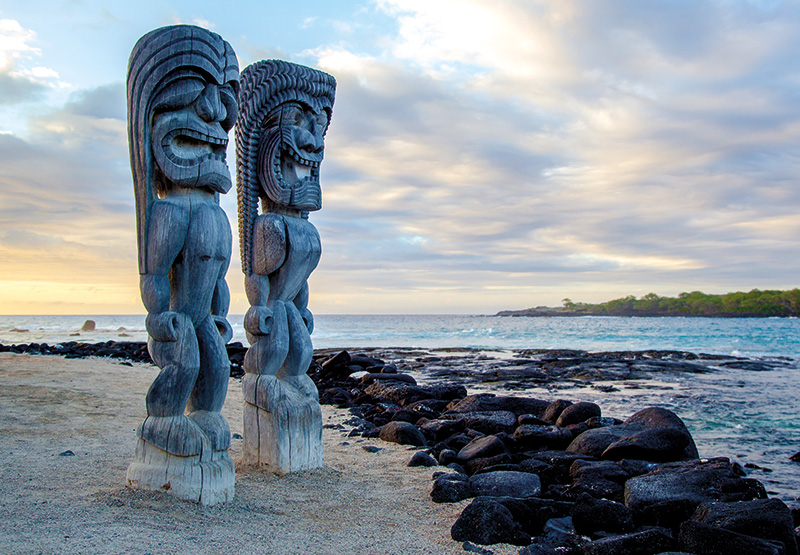 I am following in the footsteps of Hawai’i’s great monarchs and the island’s first missionaries who settled in Kailua-Kona, a seaside town on the Kona Coast. A local points out Moku’akaua Church – the first to be built in 1837 and Ahu’ena Heiau, the temple built by the great chieftain, King Kamehameha in 1813 to honour Lono, the god of fertility. I am impressed, but it is the gods and all that ties in with them – the hula dance, music and myths – that I’ve come to see.

If there was ever a reason to discover the soul of the Hawai’ian Islands, it should start with the legend of the fiery volcano goddess, Pele, who lives at the summit of Mauna Kilauea on the Big Island. “It’s a story waiting to be told, or at least an important induction into our culture,” is how Jai, my thirty-something bartender at the Kahakai Bar sees it.

Not long after Pele created the Hawai’ian Islands, she fell in love with a handsome warrior, Ohia, who was devoted to another. So in a burst of anger, Pele turned him into a twisted tree. The Gods, however, took pity and turned his love into the tree’s blossom so their souls would reunite. “Now, whenever there’s a volcanic eruption,” Jai says, “Hawai’ians know that Pele or ka wahine ‘ai honua – the woman who devours the land as we call her, is mourning the loss of Ohia, who was her one true love.” 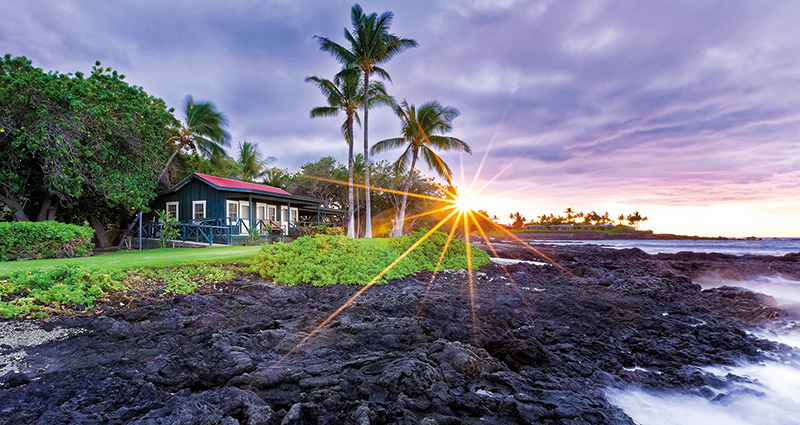 Of course, it would be easy to overdose on Polynesian folklore, such is the richness of the island’s ancient culture. But the Big Island’s intoxicating scenery and mercurial mountains have done little to diminish the myths – think of Hawaii Volcanoes National Park, where Pele’s fiery soul rises and cracks the earth like parting currents.

From the air, the island is even more impressive. Beneath churning blades, I look down upon the quiet inlets fringed by black volcanic sands. Sprawling farmlands of Macadamia nuts, avocado and taro, and large herds of cattle that dot the island’s paniolo (cowboy) country. Sleepy fishing villages where nets are cast and local markets bustle. Treacherous hiking trails that finger scalded mountainsides and lush rainforests. However, the true gems of the Big Island are the belching volcanoes, where rivets of black molten rock and poker-hot lava flows, twists and turns like a hissing serpent before tumbling into the blue Pacific in a plume of steam.

Founded a century ago, the national park today spans 134,760 hectares and includes Mauna Kea, the world’s tallest mountain from base to summit, rising 9,754 metres like a slumbering Leviathan from the ocean floor. Then there’s the Goddess of Fire’s place of rest, deep within the folds of Kilauea’s caldera – the very mountain she brought to life in 1983. As we fly close to it, I tell myself that there’s magic conjured by such scenes, especially when Pele is blasting into existence up to 490,000 cubic metres of lava on any given day. 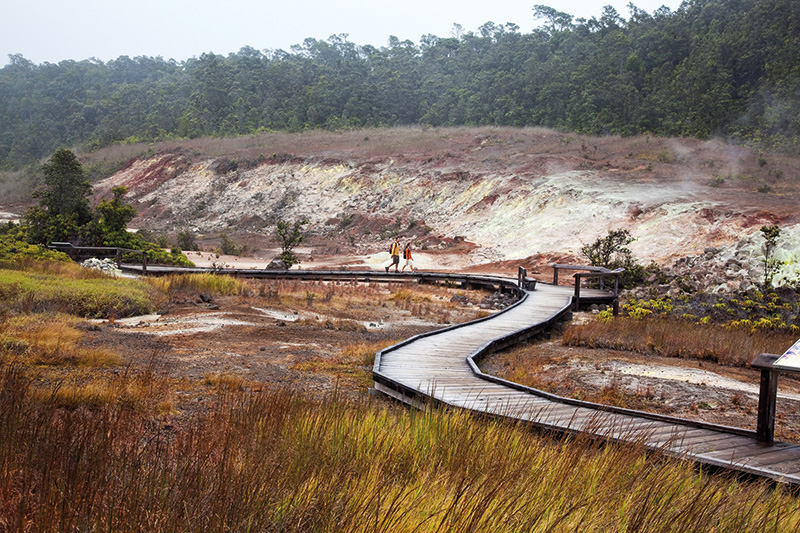 The next day I tour the park in a 4WD with my guide, Pat, who reveals much of the area’s geology. He knows these roads well. He points to exotic ferns and other endemic species that carpet the lush rainforests along Crater Rim Drive. We cruise to Thurston Lava Tube just as a sudden squall catches us. By mid-afternoon, the jeep is humming north along Saddle Road where arguably, the Big Island’s splendour and fury are best seen from Hawai’i’s rooftop at Mauna Kea.

Near its chilly summit, we arrive at its Astronomy Precinct as the late afternoon clouds begin to part. Dusted in snow, it is the sentinel of domes – the ‘eyes’ of the Big Island and the galaxy beyond – along with the high altitude that leaves me breathless. “It does take time to acclimatise,” Pat says reassuringly as a Hawai’ian hawk swoops above us. “And here on the Big Island, time is what we do have.”

With the absence of other tourists, I stand there momentarily to soak in the panorama as the colours of twilight creep slowly across the sky. Beneath a constellation of celestial stars, all manner of harmony radiates. Following my gaze, Pat begins to tell me the story of the Hawai’ians who were the ancient world’s veritable ‘star watchers’. Not only did these seafarers associate the cosmos with ancient deities, but the skies also played an important role in the way they constructed their dwellings and chartered the waters in outrigger canoes. Yet the intended manner of harmony between the land and sky, and the construction of the observatories on sacred land, have caused many seismic rifts.

“For some, the observatories are a constant reminder that the Hawai’ian people’s kingdom and beliefs were destroyed by the Europeans; and to others, their very presence is simply disrespectful,” Pat explains. But tourism is big business along with the international funds for the research that take place here. “It’s a delicate issue.”

The next morning I break away from any touring to pay my respects to Hawai’i’s ancestors; the Polynesians-Tahitian seafarers, who arrived at the Hawai’ian archipelago over 1,500 years ago to cultivate new crops and inhabit the islands. Near the ruins of Ka’awaloa at Kealakekua Bay – now part of the State Marine Life Preserve and where green sea turtles come to shore to nest, I come across British explorer, Captain James Cook’s lofty memorial. As legend has it, Cook was mistaken for the harvest god, Lono, when he first stepped foot on Hawai’ian soil in 1778. Upon his return to the Big Island a year later, his god-like status had eroded and in a heated exchange, he was clubbed to death. 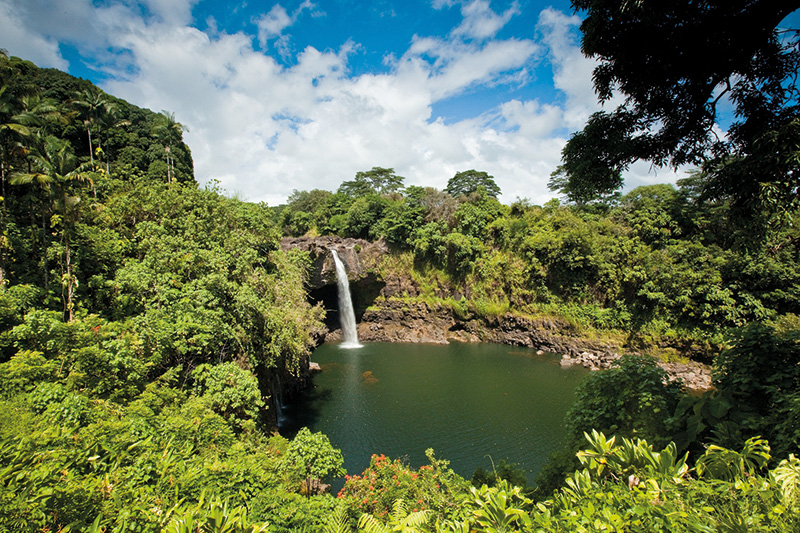 Out of the blue, a voice speaks. It is another site visitor – a middle-aged Hawai’ian with the face of a chiselled warrior. Softly spoken, he begins to tell me about the island’s ancient society, of the kapu laws that bound religion and proprieties, and of King Kamehameha, conqueror and unifier of the Hawai’ian Islands, as we stand in the shadows of Captain Cook’s ghost.

There was a time when the idea of displacing Hawai’ian royalty seemed remote, so disciplined was their society. Nevertheless, by 1893, Hawai’i’s sovereignty was no more. First came the missionaries to spread the word of Christ. Then came the Europeans and Americans who established cattle ranches and vast sugar plantations. Suddenly, I feel like a rude intruder.

In the afterglow of sunset along the shoreline on the Kona Coast, with soft ukulele music drifting from my jeep’s radio and the sound of the rolling surf caressing its golden sand, I am also reminded how the gentle hand of nature still touches this pocket peace of paradise.

The next morning I wind around the coast to Honoka’a, once a thriving hub for the Big Island’s now collapsed sugar industry. A few steps around the sleepy town – that’s all it takes, and I find myself at Hamakua Sports Bar & Grill where I hook up with Aheahe, a brown-eyed surfer, artist and sometimes tour guide for friends of friends. As we drive past fields of untamed sugar cane stalks towards the tiny community of Kukuihaele, I discover that he is also a wealth of information on the island’s history. Within minutes, I drink in his narrative of the Big Island beneath a threatening sky. 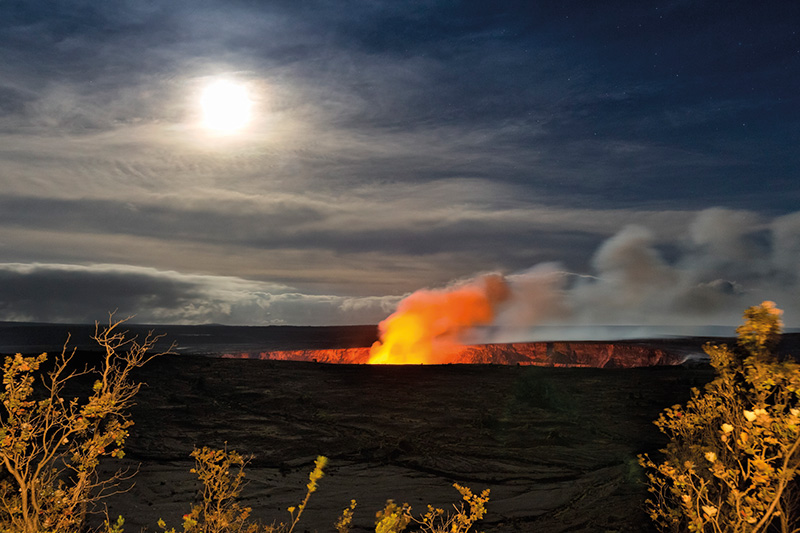 We round a gulch and arrive at The Last Chance Store, which pretty much sums up the village. From boom to bust, to ‘let’s just exist’. Yet there’s a firebrand rusticity to its spirit, it’s robust and magically authentic. As the rain begins to fall, at first a few droplets and then in sheets, Aheahe tells me that Kukuihaele’s persistence to survive from two devastating tsunamis and the collapse of the Honoka’a Sugar Company’s mill, where many descendants worked, is more a reflection of the people who chose to stay. “Over the years, many relocated to find work in Hilo, Kona or at one of the agricultural outfits. I even tried living in Honolulu after college,” Aheahe confesses. “Eventually, the Big Island drew me back; I like to think of it as Hawai’i’s true soul. It’s home.”

Later, we head to the heart of Waipi’o Valley, where the winding road has given way to Shangri-La; a verdant gorge shaped like an amphitheatre. Known as the ‘Valley of the Kings’, I am told that it is also the boyhood home of King Kamehameha; and the place where he was bestowed with his powers as a great leader by the war god, Kula’ilimoku. Nothing special has taken place, yet I feel its magic. The sheer splendour of the steep precipices which cradle the valley. The thundering cascade of Hi’ilawe Falls, which plunges 600 metres into a natural boulevard before being sliced by the Waipi’o Stream. It is easy to lose all sense of time; a thrill I always seek when I am in the Hawai’ian Islands. Only the “No Trespassing” sign I spot betrays Shangri-La; the tourist map for hikers and climbers has undoubtedly found its mark.

Just as Kapu has survived, so have the myths in Waipi’o Valley that fuel King Kamehameha’s legend. At the Last Chance Store, a local villager, Mike, tells me of the story how the “night marchers” – the ghosts of fallen warriors, who carry fiery torches and blaze across the valley’s ancient battlefields. “If you come across their path,” says Mike, “and you’re not related to one of the spirits, you will die.” Aheahe also nods.

Over rich, dark Kona coffee, which we sip at the front of the store, Aheahe then adds a voice of reason to the myth. “Visitors are directed to Pu’ukohola O Honaunau National Park where they can step into the world of our ancient culture and kapu,” he explains. “But to connect with our ancestors, you must first come here to experience it.” 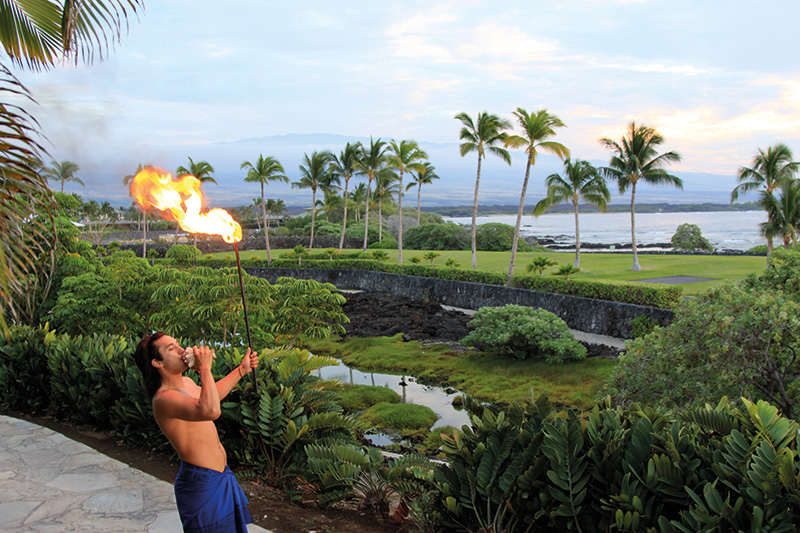 On a windy afternoon, I find myself back in Kailua-Kona wandering the oceanfront, bathed in sea spray and tropical scent. I spot a group of young girls on the beach practising the hula ‘aana –the modern version of the spiritual dance of love. I close my eyes for a moment and drift back in time with King Kamehameha’s descendants – to the ancient world of the Big Island.

I then see an exotic hula dancer at the foot of Halemaumau Crater near Kilauea’s summit; with her long black hair adorned with a red-flamed hibiscus; the colour of the volcano’s fire. Amid the seductive flames of tiki torches, and a spectacle of fire and ash, she is paying homage to the Hawai’ian gods through her graceful movements, and to the time when the capricious and passionate Pele walked the earth.

The Volcano Goddess would be pleased. •

Getting there
Hawaiian Airlines is Hawai’i’s largest and longest serving airline and operates direct, daily non-stop services from Sydney to Honolulu and four times weekly from Brisbane. For passengers visiting the outer islands including Hilo and Kona, the carrier offers nearly 160 connections daily from Honolulu. hawaiianairlines.com.au