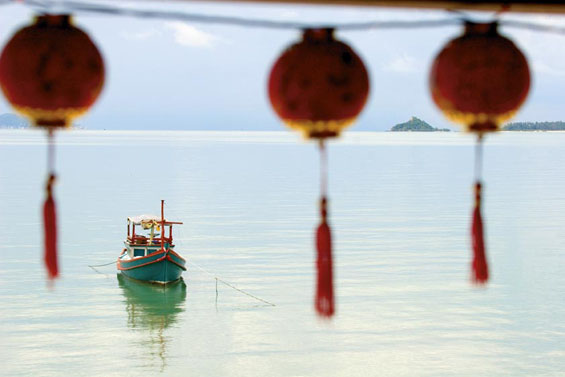 John Borthwick explores Koh Samui and Koh Phanghan, two of the most popular island destinations in the Gulf of Thailand.On the map, Koh Samui might seem like a bonsai version of Tasmania: one that’s been squashed a little sideways. Samui’s weather – eternally tropical rather than plain intemperate – trumps all other comparisons with Tassie. Jungled ridges tumble down to Samui’s Gulf of Thailand shores, where the sands at midday blaze so white you might wonder if there is a seaside version of snow-blindness. 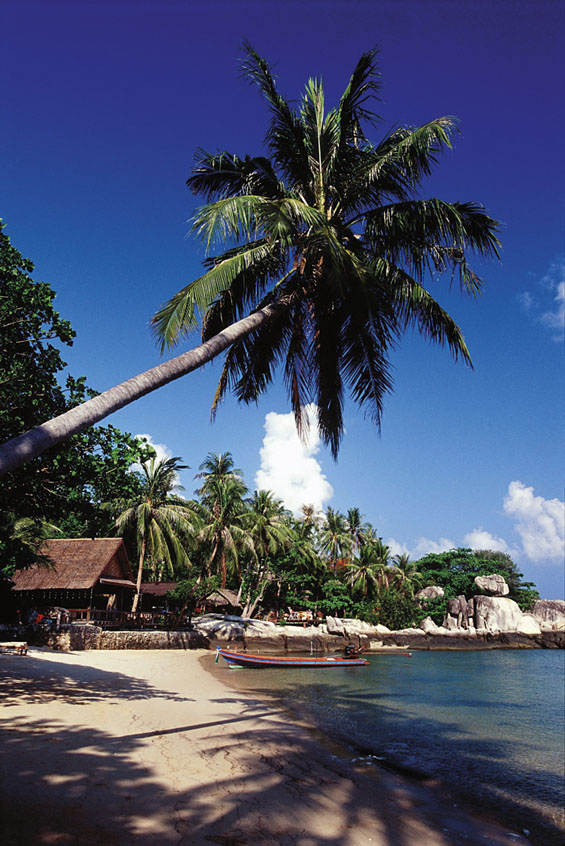 Vivid as it still is, Koh Samui is one of those places where, according to some, yesterday was always better. It’s true that in 1971, for instance, there weren’t around one million visitors annually, nor was there an airport that handled scores of flights a day. Then again, there were no hotels on the island in 1971, and almost no roads. In under four decades, this formerly somnolent fishing settlement about 40 kilometres northeast of Surat Thani in the western Gulf of Thailand has gone from “undiscovered” to Thailand’s second most popular island destination, after Phuket. As well as excellent resorts, there’s a golf course, some 40 7-Elevens, an Irish pub, Biergartens, pizzerias and English-style cafés that serve bangers and mash.

Much of the rest of the island, however, remains green and snoozy – except if you want it loud and pumping. Take the north-coast fishing village of Bophut. Unlike Samui’s booming beach towns of Chaweng and Lamai, Bophut retains some of its Thai character even while the old, two-storey teak shop-houses along its shorefront main street are reborn as cafés and boutique lodges. 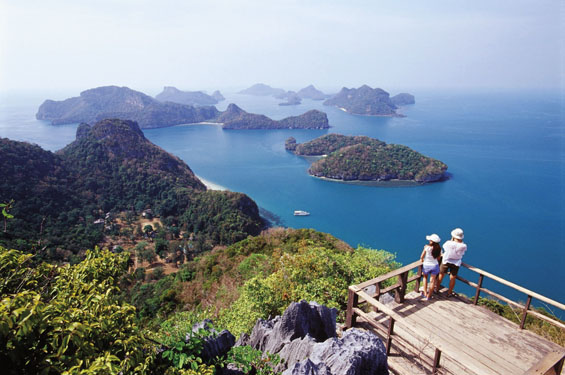 Koh Samui, Thailand’s third largest island, now lures visitors primarily to its increasingly upmarket resorts. Backpackers were the mainstay of the island’s business during the 1980s and early ’90s. Many of them now return to Samui to stay at four- and five-star hideaways. Meanwhile, their own backpacking kids use Samui as a springboard to less-developed islands such as Koh Phangan and Koh Tao.

The strip of pubs, clubs and malls at Chaweng Beach and the somewhat quieter Lamai Beach, both on Samui’s east coast, are the centres of most of today’s tourist action. Samui has a good around-island road and self-driving is uncomplicated. The few must-sees on this laidback island are more like “might-sees”. One unique spot is the Secret Buddha Garden, also known as the Magic Garden. Tucked away in an upland jungle gorge, this grove of mythological sculptures dotted around a gushing stream was shaped in concrete by a Samui farmer, Nim Tongsung, who worked on them for decades until his death at age 91. 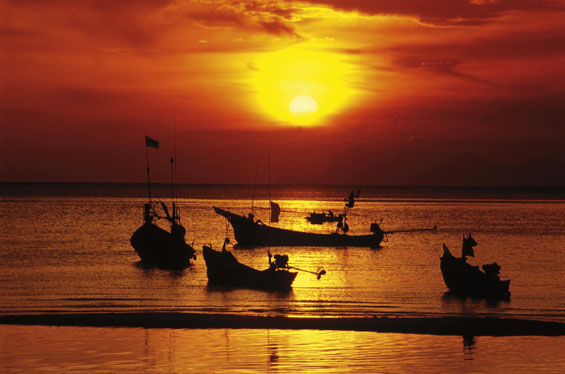 Most visitors head to the island’s first and most enduring icon, the Big Buddha at Wat Phra Yai, not far from Bophut. This 12-metre, golden statue has sat by the sea here for 37 years and, while its bulk is impressive, don’t expect too much meditative solemnity. There’s a hullabaloo of souvenir stalls and raucous, piped music. Other “might-sees” include Namuang Waterfall, south of Nathon, a refreshing cataract with a broad pool; the Hin Ta and Hin Yai (grandfather and grandmother) rocks at south Lamai, whose forms resemble, well, Adam and Eve’s wedding tackle; and the Ancient House near Ban Thale, Samui’s oldest building, constructed completely of teakwood, without any nails.

Samui time for most visitors is mostly about beach time. The east-coast sandstrips, particularly long, broad Chaweng Beach and the smaller Lamai, are the most popular. The water is clear and calm, although Chaweng is thronged with tourists and hawkers. While the west coast is far quieter, the shallows are often coral-strewn; however, uncrowded Lipa Noi on this shore boasts picture-perfect tranquillity.

Angthong National Marine Park is a scattering of some 42 islets around 30 kilometres west of Koh Samui, with spectacular limestone formations, caves, pristine rainforest, lagoons and empty beaches. The scuba diving here is better than any around Samui. The real dive mecca, however, is Koh Tao (Turtle Island), about 45 kilometres north of Samui. Compared to that on Samui, most of its accommodation is fairly basic, but Tao’s great attraction is below the waterline. Lying just off the beach, its coral reefs are the perfect place on which to snorkel or learn to dive. 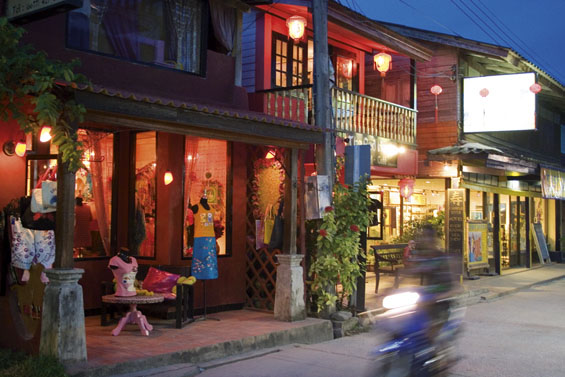 Meanwhile, other travellers submerge themselves in sound waves at Koh Phangan, 15 kilometres or so north of Samui. The all-night raves on Phangan can attract up to 20,000 trance-dancing young travellers, and are so popular that there are half-moon and “black-moon” parties as well as the notorious full-moon ones. International and Thai DJs rev up the crowds, who kick it along further with whatever they’ve put under their tongues. All kinds of music – techno, trance, Goa trance, dub, reggae and house – roar out from huge sound systems across Hat Rin Beach.

If you’re determined to not be part of the “yesterday was better” school of travelling, skip the ’shroomed-up, ekkied-out “mooners” and head to any one of the quieter beaches around the 168-square-kilometre island. “Try getting away from Hat Rin. It’s no more Phangan than Bangkok is Thailand,” advises one blogger, sagely.

Poor roads don’t make this the easiest quest, so pilot that motorbike cautiously or ride the public songtaew pick-up. Some 75 percent of the island is mountainous, tropical jungle with a fringe of coconuts, so to speak. Beaches such as Hat Mae Had, Hat Yao, Hat Khuat (Bottle Beach) and Hat Sadet still give you plenty of chance to enjoy the kicked-back, siesta’d-out option. 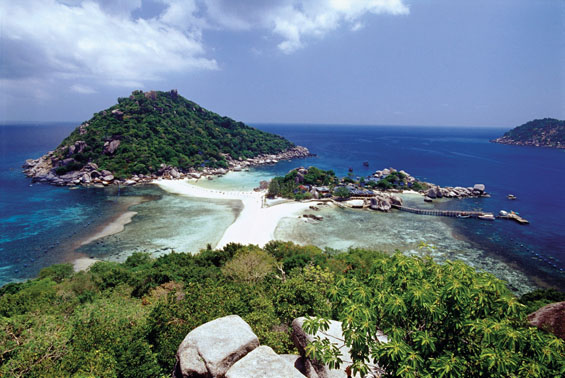 The northeast coast has two fine beaches near Thong Nai Pan. These twin coves typify the image of a tropical paradise, their white sands framed by rainforested mountains. There’s also small village here with a few cool bars and bungalows.

A number of small resorts of growing sophistication have made Phangan more than a backpacker escape. In fact, the island now has more than 250 accommodation places, ranging from five-dollar-a-night bamboo huts to luxury air-conditioned suites with private pools. One resort even runs an annual film festival in late February.

The island is still far less exploited than its big sister Samui. In low season, it’s not difficult to find an almost-empty beach or a deserted waterfall. Satay lunch followed by a dish of juicy, sliced mango and sticky rice. A cold beer or coconut juice. A hammock, a good book and a siesta. It’s still all here. Yesterday lives on, better than ever, at Koh Phangan. • 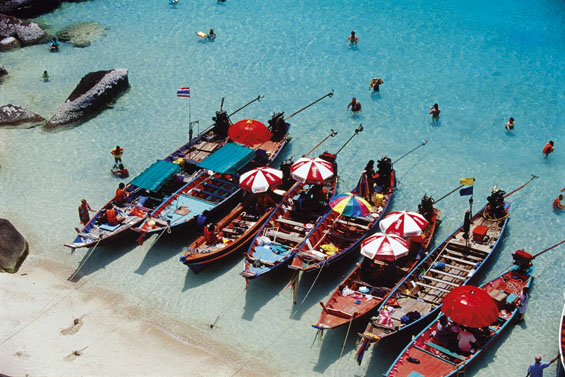