David McGonigal explores the floral garden of Cape Province in South Africa from luxurious Grootbos resort.
Where is the greatest flower show on earth? Until recently I would have answered “Chelsea, Western Australia or Brazil.” The correct answer is none of these but rather South Africa’s Western Cape. It’s not only in mammals, in all their unbelievable permutations from lions to hippos to giraffe and antelopes that South Africa excels. The pride of the Cape Floral Kingdom is the floral richness called the fynbos – the word stems from the Dutch for “fine-leaved flowers” a grouping that include proteas, South Africa’s national flower. The fynbos can boast over 1300 plant species per 10,000 square km while the next richest, the South American rainforest, lags far behind with just 400.
Looking across Walker Bay to the Cape of Good Hope, Grootbos is the perfect base for exploring this sweeping world of land and sea. A luxury lodge within its own 2500-hectare nature reserve, Grootbos is extraordinary. It’s easy to cage dive with Great White sharks in the morning, tour to discover the surrounding flowers before lunch, fly from the resort’s airstrip to Cape Agulhas, the southernmost point of Africa, in the afternoon and be back for sundowners. Between June and December a cruise to Dyer Island, crowded with South African fur seals and penguins, requires many stops when whales come to visit. Other outings can be as relaxed as a walk through the lodge’s Milkwood forest or a tour of the local coastal wineries of the Overberg region. 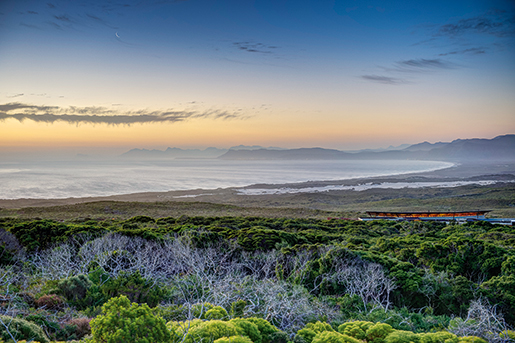 Grootbos is made up of 27 suites across two lodges that operate independently plus a spectacular self-contained six-suite villa that comes complete with private guide, chef and butler. We stayed in the villa room that Brad Pitt had used when he came here to go shark diving. I looked carefully but in vain in the hope he’d left Angelina behind.
Despite Ms Jolie’s absence, the staff at Grootbos appears to relish providing rewarding surprises (like waterfront sunset drinks with whales) that are the hallmark of great hospitality. It’s also a resort well integrated into its environment in so many ways.
Grootbos and the sea
Grootbos is midway between the Cape of Good Hope, the traditional turning point for sailors returning from Asia, and Cape Agulhas, recognised by geographers as the meeting place of the Indian and Atlantic oceans. As modern, cosmopolitan Cape Town attests, culturally and historically this is where East meets West.
The offshore collision of the warm Agulhas Current with the cold Antarctic Benguela Current provides a wealth of marine nutrients. To see who turns up for the feast you only have to head out on a boat, take a flight or walk down to the beach. The most spectacular are the Southern Right whale mothers who bring their calves to bulk up here. The most terrifying are the Great White sharks, always hungry and on the prowl. The title of most endearing is a toss up between the pod of dolphins we found surfing the shore break and the endangered African penguins swimming alongside us near Dyer Island and again at Bettys Bay. 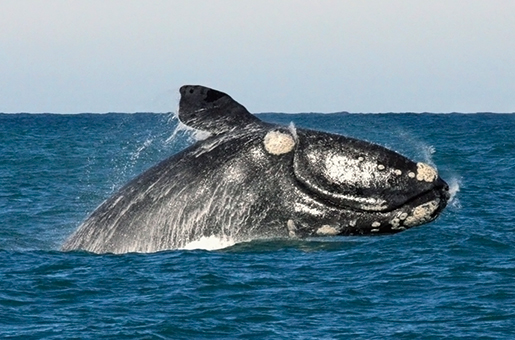 From Grootbos verandahs you can look across more than a kilometre of fynbos to whales breaching in Walker Bay and at brunch each day there are tales of the morning’s encounters with shark and whale. At the end of the day sunset turns the whole bay to copper and backlights distant Cape Point.
Grootbos: at one with the fynbos
Driving southeast from Cape Town towards Gansbaai and Grootbos, it seems as if the coastal heath offers little variation. So it’s a surprise to leave the road and find yourself in dense vegetation and thriving gardens before emerging at the lodge. Both Garden and Forest Lodges manage to merge into their environment without compromising on either luxury or views.
There’s a heart-warming story of how, in 1991, Michael and Dorothee Lutzeyer bought a 123-hectare farm for their family holidays from Cape Town because they were so impressed by the views. Michael’s father Heiner subsequently used to roam the property for hours every day, discovering new plants and photographing what he found. Today Grootbos is a private nature reserve that extends over 2500 hectares. So far 765 plants have been identified of which 112 are endangered and six haven’t been found anywhere else. It is widely recognised by botanists as a jewel of the fynbos.
The free 4WD excursion to explore the vegetation of Grootbos is one every guest should do. Our guide was Jo and we learned a lot about this rich environment and, even outside the early-spring wildflower season when pincushion proteas paint the hillsides in orange, the tour concluded with an impressive posy of flowers, each with a tale to tell. The pinnacle of the profusion of flowers was the king protea with an impressive flowerhead 30 cm in diameter.
A walk through the trail deep inside the Western Cape Milkwood forest that surrounds each lodge is a lot more like a visit to Tolkien’s Mirkwood than Dylan Thomas’ alliterative “play for voices”. The forest covers some 60 hectares of Grootbos and while it rarely exceeds six metres in height, the oldest trees are estimated to be more than 800 years old. In 2006 a fire consumed the main building of Forest Lodge and burned some Milkwood. The lodge has been rebuilt to offer even more luxury and there’s an ongoing tree-planting program named simply “Future Trees”.
Grootbos in the community
There is a strong sense of community among the staff at Grootbos and that carries over into the Grootbos Foundation that was founded in 2004 and runs as a separate non-profit organisation. The aim is to both conserve the biodiversity and to develop nature-based livelihoods for locals (who live in towns where unemployment is over 50 per cent.). 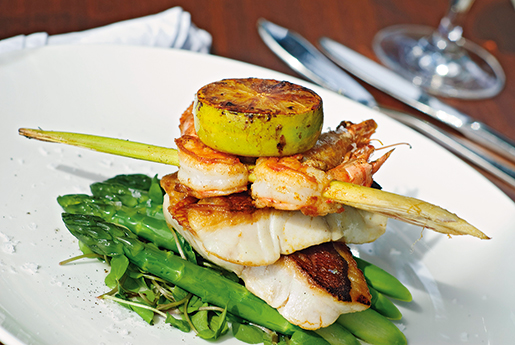 On our recent visit Michael was excited to show us large used apple crates that the foundation had bought and that he hopes will be used as self-contained gardens for homes within the crowded townships. On a larger scale, the Growing the Future farm run by the foundation supplies many of the vegetables and produce for the lodge kitchens, sold at full market price.
Green Futures is perhaps the most inspired initiative. It began in 2003 and takes a small number of local students of various ages and teaches them life skills (such as driving, computer skills, AIDS awareness and English) as well as horticulture. The project is largely funded by the profits from the plant nursery and each student is provided with a uniform, meals and a basic wage. It’s impressive that there have been no dropouts and every graduate has found work in horticulture, conservation or eco-tourism.
In the nearby town of Gansbaai, the well-maintained sports ground and sports centre is another Grootbos Foundation initiative, accompanied by an international volunteer program to develop sporting skills among local school children. Many guests have shown an interest in these programs so the resort offers a free Social Responsibility Tour that reveals this heart-warming “giving back” side of Grootbos.
Eco-luxury
The whole purpose of Grootbos is to preserve and enhance its environment. But, for guests, there’s certainly no sense of hardship. Each five-star lodge suite is freestanding with a luxurious canopy bed, well-equipped en-suite bathroom and an expansive private deck. 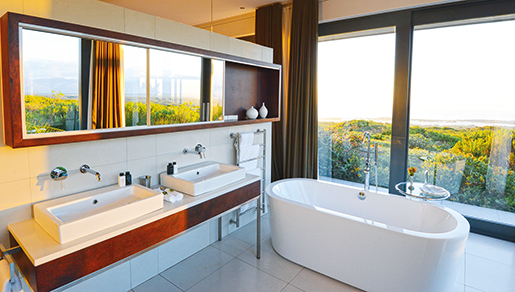 Michael Lutzeyer says that two of his pet peeves with most hotel rooms are that there’s normally insufficient space for luggage and there’s nowhere to escape if one of you is awake with jetlag and the other is asleep. So every suite at Grootbos has a large luggage area and lots of hanging space and each suite has a separate lounge area with a fireplace.
The standard of cuisine at Grootbos is exemplary and matched by excellent wines from nearby wineries. In fact, most of the elements of each meal are sourced locally. All meals, including the five-course dinners, are included in the rate that begins at just R1645/$180 per person per night and rises to R2940/$320 pp in high season. Guided excursions like horse riding and a visit to the picturesque coastal Klipsgat Cave where traces of human occupancy date back over 60,000 years are included, too.
It’s not surprising that Grootbos has won numerous awards over the years. These have been for ecology, innovation, responsible tourism, conservation and simply as the best hotel in Africa and as one of the 101 best hotels in the world.
Grootbos is the third side of the Cape Province travellers’ triangle: Cape Town, the vineyards of Stellenbosch or picturesque Franschhoek and the rich coast between the capes. It offers a remarkable sense of harmony within its wondrous realm. •
Photography by David McGonigal and Grootbos
Travel Facts

Qantas flies directly daily from Sydney to Johannesburg and offers a SAA codeshare flight from Perth, with connecting flights to Cape Town. 131 313; qantas.com.au
South African Airways flies directly daily from Perth to Johannesburg and offers a Qantas codeshare flight from Sydney. 1300-435-972; flysaa.com
When to Go
Cape Province is on the same latitude as Sydney and has a climate to match. The low season at Grootbos is May-June, mid season is July-15 September and high season is 15 September-April. The whale season is June-December.
Further Information
Grootbos has an excellent website: +27-28-384 8008; grootbos.com
South Africa Tourism. southafrica.net