With its scenic drives, quaint heritage towns, five-star lodges, and award-winning food and wine, the Grampians is the ultimate destination for a quintessential Australian road trip.

The Grampians rugged landscape of sandstone mountain ranges is just a short drive from Melbourne and made for the adventurer. At its centre, the Grampians (Gariwerd) National Park is a 174,504-hectare nature reserve with hiking tracks to spectacular waterfalls like the iconic MacKenzie Falls that flows year-round to wildflowers trails, that include bright Grampians Boronias, blooming in springtime.

Climb to panoramic heights with 360-degrees stunning views at Mount William (Duwil), the Grampians highest peak; its 1,167m summit offers some of the most breathtaking vistas in Australia. And then end your day with a fine dining meal or wine tasting. Be it north to south or east to west, this epic range offers up an adventure for everyone.

The Northern Grampians is a great place to start your road trip adventure. Explore the former gold mining town, St Arnaud, that dates back to 1855 and has retained a historic charm with its heritage pubs and the St Arnaud Rail Station – Raillery Hub. Don’t miss the St Arnaud Silo & Art Trail, 10 fantastic murals around the town. It is also included on the Australia-wide Australian Silo Art Trail.

Swing by Stawell to grab a coffee at one of its many cafés on Main Street. Or visit Grampians Ale Works, a local family-owned brewery, for something a little stronger. Wine lovers will be charmed by the village of Great Western. In the heart of the Grampians Wine Region, it’s home to some of the world’s oldest vines producing award-winning wine including Shiraz and Riesling.

With its volcanoes and spectacular waterfalls, the Southern Grampians is the ultimate location for the great outdoors. Put on your hiking boots and head for the hills with mountain trails offering sublime views of the region.

In Penshurst, wander up Mt Rouse, a dormant volcano with a crater that rises 100 metres high. Then when back at ground level, delve a little deeper at the Volcanoes Discovery Centre. Food fans shouldn’t bypass Dunkeld. Home to the two-hatted restaurant Wickens @ Royal Mail Hotel (regularly voted one of Australia’s best dining destinations) and the Dunkeld Old Bakery (circa 1887) with its Victorian wood fired scotch oven that makes their famed sourdough bread daily. 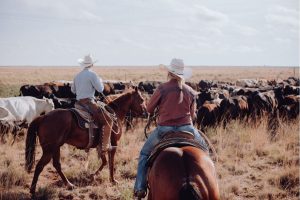 The city of Ararat is the heart of the eastern side, nestled at the foothills of the Grampians (Gariwerd) National Park and close to the Grampians Wine Region. It offers plenty of natural pursuits, with Mount Langi Ghiran (Lar-ne-jeering), Mount Cole, Mount Buangor and Ararat Hills Regional Park all a short drive away. Considered one of Victoria’s most haunted regional towns, Ararat hosts midnight ghost hunts and haunted historical tours for fearless travellers. The scenic drive from Ararat through Carrolls Cutting to Moyston, the birthplace of AFL, is a must for footie fans. Here they host the Moyston’s Longest Kick competition every Easter.

A 3.5-hour road trip northwest of Melbourne, Horsham, known as the Cosmopolitan Capital of the Wimmera, boasts a vibrant mix of culture, art, food, and shopping. Located on the banks of the Wimmera River, take the Horsham Public Art and Heritage Trail that winds its way through the streets of the city centre. Make sure you visit the brand new silo art titled Yangga Dyata – Walking on Country.

To the west, you can explore world-renowned rock-climbing sites at Mt Arapiles, or visit striking waterfalls. With the Grampians (Gariwerd) National Park and the Wartook Valley region only 30 minutes south-east, MacKenzie Falls (Mikunung wira), Victoria’s largest waterfall, is just at your doorstep.

The Grampians have a stay over to suit all slumbers. From luxe 5-star hotels to cosy cabins with an open fireplace, or glamping under the stars.

The Meringa Springs boasts an infinity-edge swimming pool with views across the Wartook Valley. This five star luxury lodge is ideal for a romantic getaway.

Or wake up among the vines Wanderlust Glamping at Seppelt Winery. Glamp in chic tents while exploring the five wineries nearby.

For campers, there are several campgrounds to suit any size of set-up. Including throughout the Grampians (Gariwerd) National Park, along the 160km Grampians Peaks Trail.

For more than 150 years, the Grampians has produced award-winning, distinctive, cool-climate wines, made to stand the test of time. The inaugural Grampians Wine Festival which will run throughout the region from 1 to 30 September and feature the Seriously Shiraz Festival. Save the date and stay tuned for the full program to be released in July, with the chance to select events from meet the maker experiences to picnic lunches.

How to get to the Grampians

The Grampians is a leisurely road trip northwest from Melbourne. With Ararat only 2 hours by car in the east or 3.5 hours to Horsham in the west.

For a romantic weekend to outdoor adventures, the Grampians is the ultimate destination for a road trip. Showcasing one of Victoria’s most impressive natural tourist attractions any time of year.

This article was produced in partnership with Visit Grampians. visitgrampians.com.au